A largely Tajik village in Kyrgyzstan has been dragged into a diplomatic row since the latest fighting with neighboring Tajikistan. 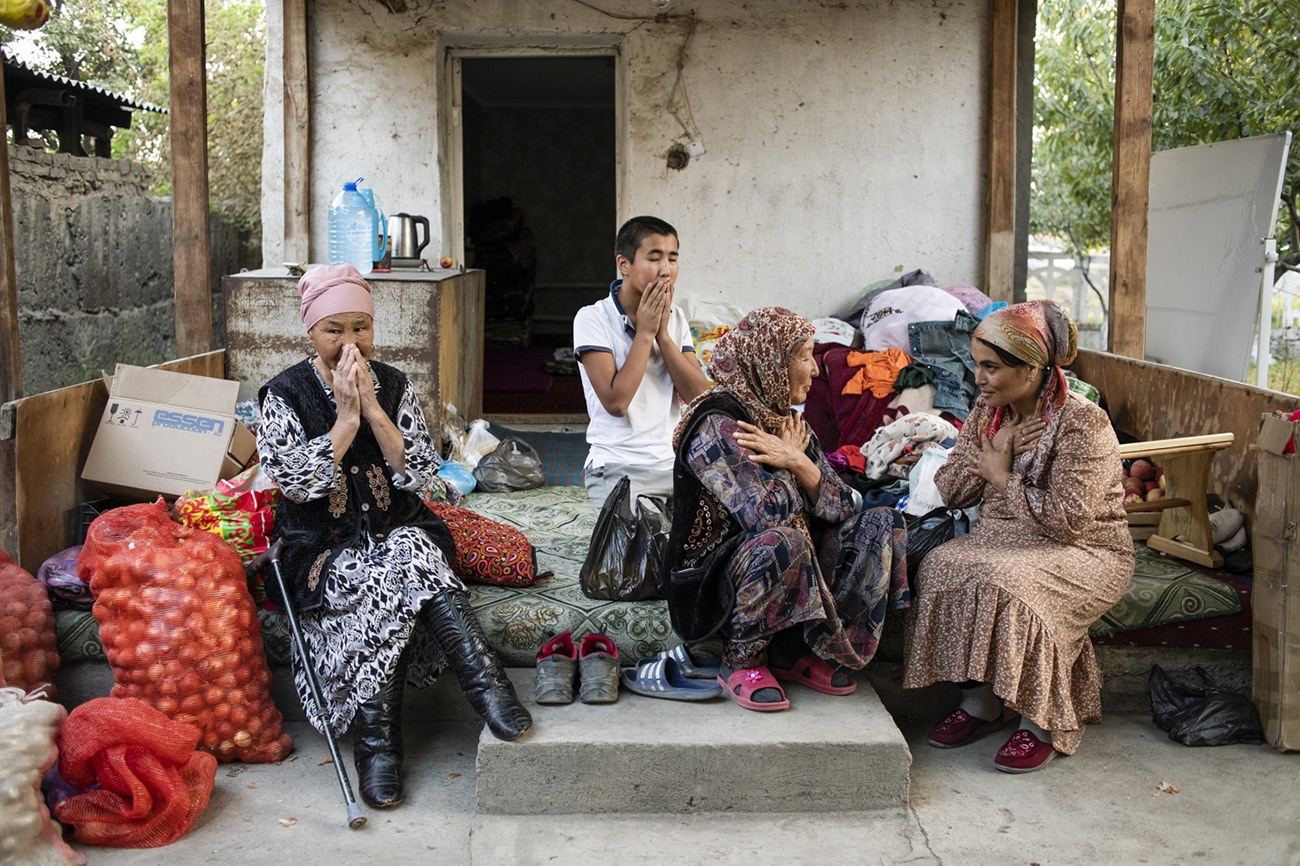 Uch-Korgon women pray with a family displaced from Batken. (Photos by Danil Usmanov)

On a typical Friday afternoon, worshippers flock to the central mosque in Uch-Korgon, in south Kyrgyzstan, to listen to Junaidillo hajji, a lean and soft-spoken 57-year-old carpenter-turned-imam whose sermons condemning the ills of drug addiction, alcoholism, and prostitution have made him one of the most influential figures in this town of 30,000.

When Eurasianet visited Uch-Korgon on the Friday after the latest bout of fighting on the border of Kyrgyzstan and Tajikistan, the two-story mosque was overflowing. Hundreds of worshippers unable to find room inside took their seats in an adjacent courtyard. 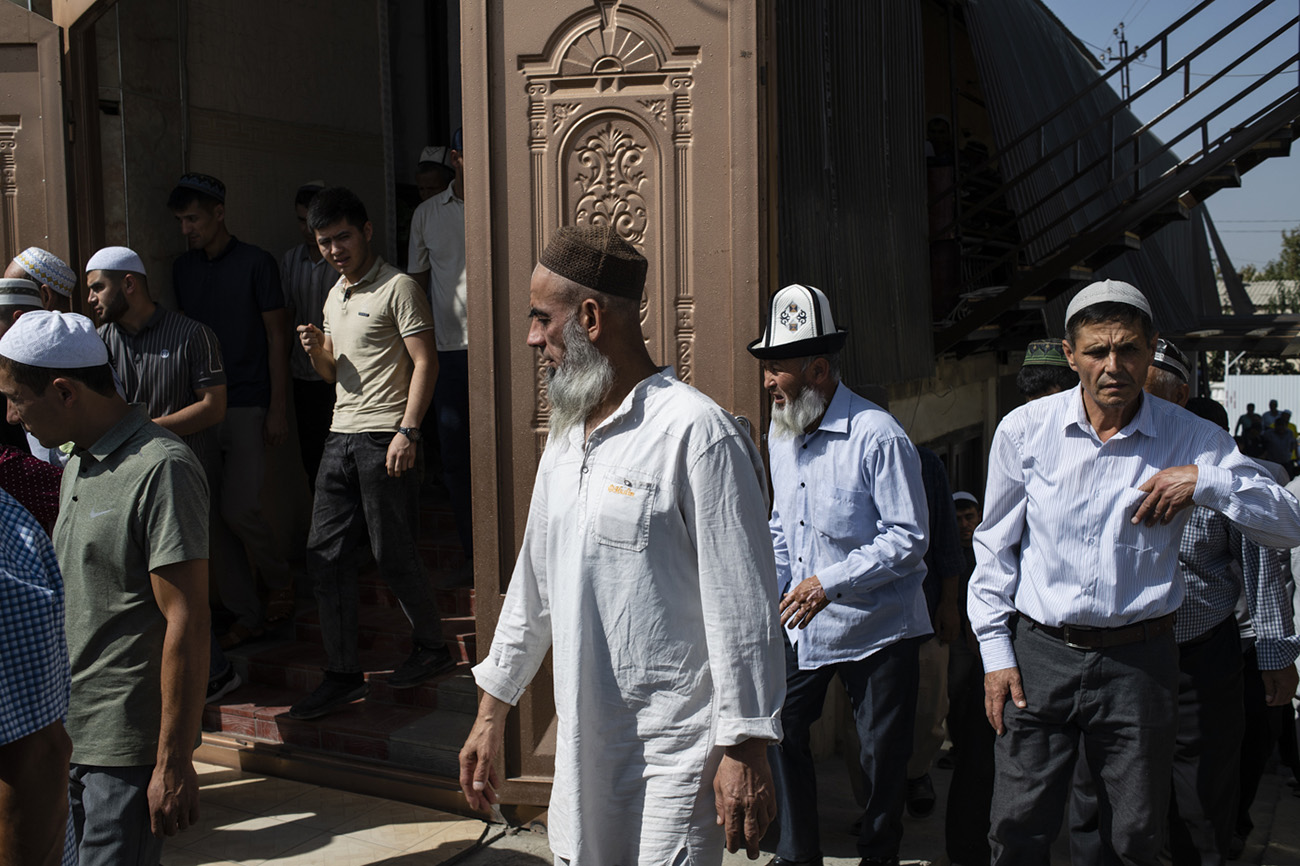 The sermon that day was not about vice, however. Junaidillo hajji talked instead about peace, tolerance and hope, delivering a message that his followers had eagerly been awaiting.

At first glance, Uch-Korgon is not so different from many other small towns in this part of the country. Life revolves around the central market and the mosque. Every morning, farmers from neighboring villages arrive in lorries laden with fresh fruit and vegetables – Uch-Korgon is particularly known for its cherries. In the afternoons, residents lounge on wooden tapchan platforms in local teahouses, sipping their hot brew and gossiping.

Things have been tense since the unrest, however. In Uch-Korgon, ethnic Tajiks make up more than 60 percent of the local population. And the town has been dragged into a diplomatic row after the Tajik Foreign Ministry accused the Kyrgyz government of mistreating ethnic Tajiks.

Dushanbe had a litany of complaints: that local authorities in the Kadamjai district, where Uch-Korgon is located, were forcefully closing down shops belonging to ethnic Tajiks; that displaced people from near-border conflict zones in the Batken province were being placed in the houses of ethnic Tajiks against the will of their hosts; that ethnic Tajiks in Uch-Korgon and Kadamjai were being forced by Kyrgyz authorities to collect money and humanitarian aid to help displaced people. The same statement went on to allege that Tajiks were being targeted for harassment and extortion, and speculated that Kyrgyz authorities were cooking up plans to deport around 500 Tajik nationals studying in Kyrgyz universities.

But in Uch-Korgon, people who spoke to Eurasianet – they included the head of the local government and a dozen residents – were adamant that all is well. At the same time, some admitted more quietly that there is a sense of nervousness and anxiety in the town.

Zamira, a teacher in her late 50s, talked about the sense of pain caused by the warring that took place between September 14-17.

"When the war broke out, I cried for several days,” said Zamira, who asked to be identified only by her first name, as did most people interviewed for this article. “I cried for the mothers who lost their children. [...] I cried for the children who lost parents. I cursed both [Kyrgyz President Sadyr] Japarov and [Tajikistan President Emomali] Rahmon for failing to prevent violence."

Zamira, who was educated in neighboring Uzbekistan and speaks Russian, Tajik, and Uzbek fluently, said that even though Uch-Korgon is far from where the fighting happened, Tajiks were still scared. Her fear was of vigilante attacks by crowds of unruly men seeking to take out their anger on ethnic Tajiks.

Akhmatjan Abdurakhmanov, the head of the Uch-Korgon local government, acknowledged that authorities feared vigilante attacks in the immediate wake of the violence on their border. At his request, central authorities in Bishkek beefed up security in and around Uch-Korgon while the trouble was ongoing.

"Uch-Korgon residents are multi-ethnic. They come from Kyrgyz, Tajik and Uzbek backgrounds. They speak several languages, and they have been living in peace and harmony for centuries," Abdurakhmanov said.

Geography means the ties of the ethnic Tajik population to the country of Tajikistan have grown weak over time.

"We have stronger economic and cultural ties with the Ferghana province [in Uzbekistan]. Every day, many Uch-Korgon residents visit their relatives in Uzbekistan. My daughter actually lives in Uzbekistan with her husband," Abdurakhmanov said.

Many Uch-Korgon residents switch with ease in their conversations between Tajik and Kyrgyz and then even Uzbek.

Abdurakhmanov said that the allegations made by the Tajik Foreign Ministry were baseless.

"There has been no harassment of ethnic Tajiks in Uch-Korgon. We did not force locals to host Batken residents, and we did not force them to collect money. People mobilized on their own,” he said. “They opened their doors to displaced people, and they shipped truckloads of food to Batken every day.” 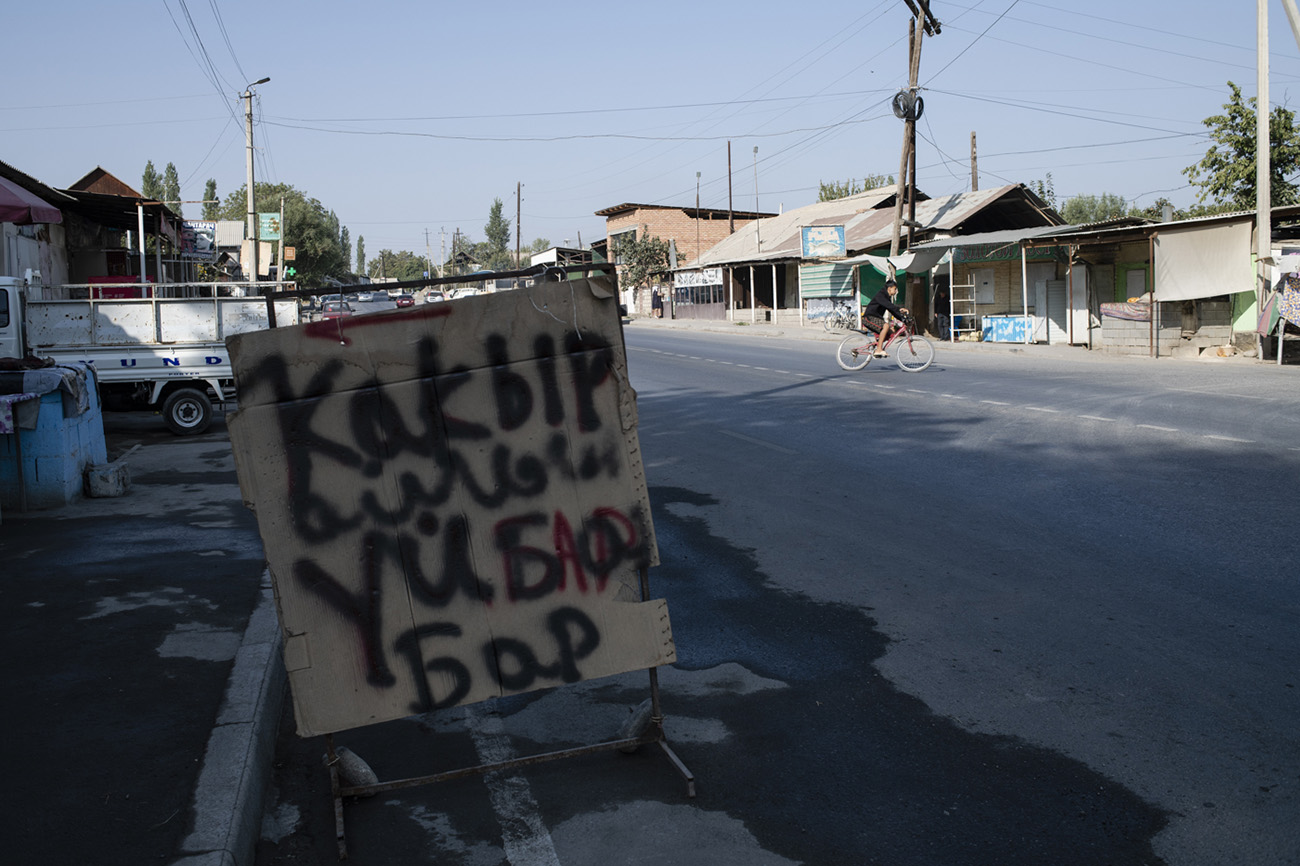 Residual fears of a flareup in interethnic strife are never far from the surface in Kyrgyzstan. A wave of pogroms targeting Uzbeks in the country’s second city, Osh, in June 2010 left hundreds dead. Abdurakhmanov says those events were a positive turning point for his community, though.

"We built ties between Uch-Korgon and [surrounding] Kyrgyz villages. We also created a formal organization called Dostuk [“Friendship”], which organizes regular meetings for representatives of various villages to discuss problems and flag issues that could threaten the peace,” Abdurakhmanov said.

Uch-Korgon’s Tajiks say they were active supporters of the proposal to take in displaced people earlier this month. Eurasianet visited a house where two Batken families were being hosted.

Ziyodillo, a 32-year-old entrepreneur, said that the decision to offer up space in his home was entirely voluntary.

"When my family decided to accept them [the displaced people], the whole mahalla [neighborhood] supported our decision and expressed willingness to help us," he said. 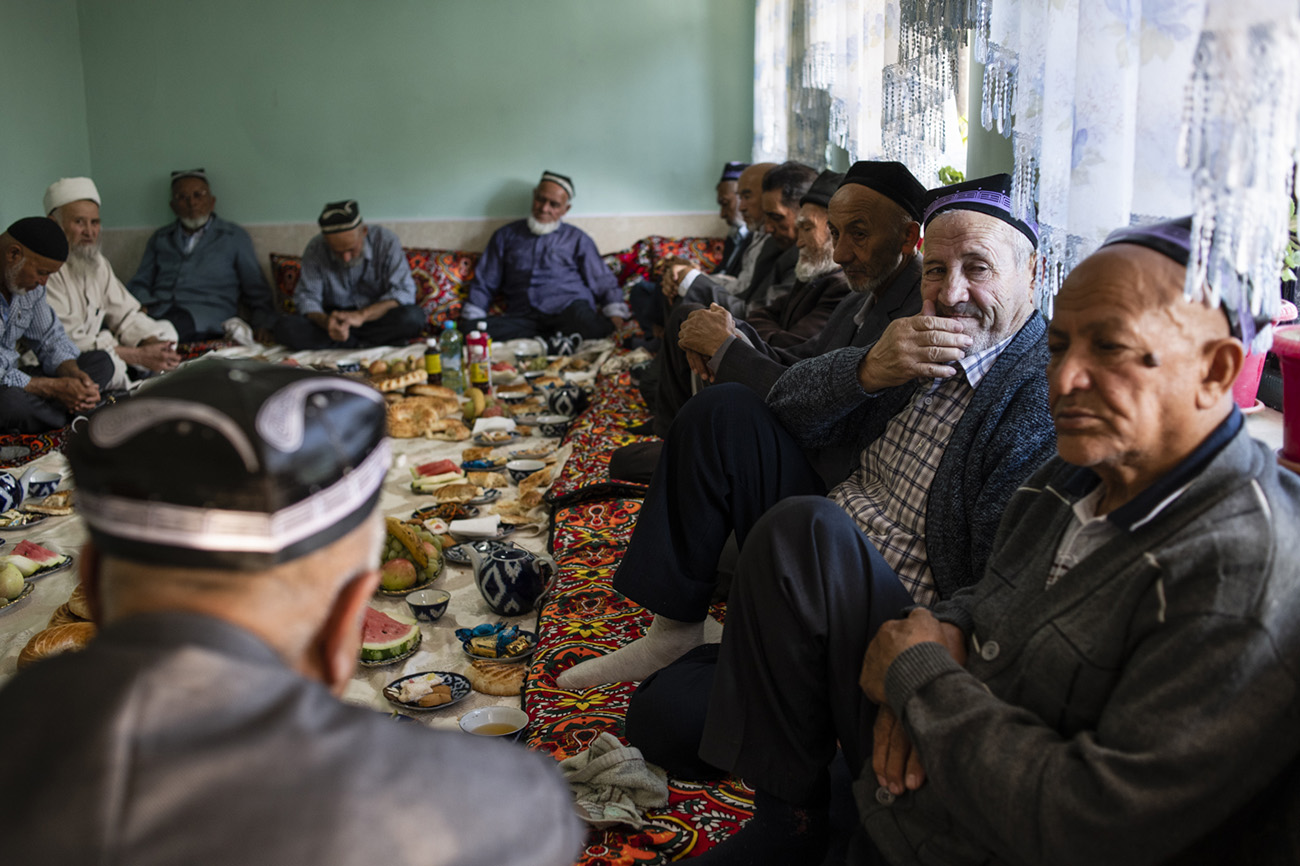 Beyond this talk of harmony, however, there are problems. Zamira, the teacher, noted that Tajik language instruction has been significantly reduced.

"Of the 10 public schools in the town, only two teach in Tajik, and they are also cutting the number of hours [of Tajik language instruction],” she said.

The rupture in diplomatic relations seen in recent years between Kyrgyzstan and Tajikistan has complicated the ability of ethnic Tajiks to remain in touch with their heritage.

Ayniddin, the head of one of Uch-Korgon’s 12 neighborhood committees, complained about the lack of ethnic Tajik representation in local government. While Tajiks are well-represented in the Uch-Korgon municipal administration, that is as far as it goes, he said.

“There are no ethnic Tajiks in the local police, the prosecutor's office, and the courts,” said Ayniddin. “We are always told that ethnic Tajiks refuse to serve in the [Kyrgyz] military and the police. But they [Kyrgyz authorities] are not giving Tajiks the opportunities to serve.”

A member of the Uch-Korgon local council who accompanied Eurasianet journalists on their reporting trip around the town voiced his concern at how young ethnic Tajiks do not see a viable future in Kyrgyzstan.

"Many young people cannot find jobs [because of the high level of unemployment in the region," said the councilor, who spoke on condition of anonymity. "To make things worse, our youths are sometimes beaten by gangs [from neighboring Kyrgyz villages who target Tajiks because of their ethnicity], and the [Kyrgyz] police do not investigate such incidents.”

But it is not only the Tajiks that complain of discrimination. Some residents of outlying Kyrgyz-populated villages say that Uch-Korgon’s government pays insufficient attention to solving their problems, such as the poor household water supply, the bad roads and the absence of a garbage disposal service. Their claim is that all the investment goes to Tajik-populated neighborhoods.

Rakhmatillo, a local barber, admitted there was palpable tension between the Tajik and Kyrgyz villagers, but he said that "the local elders are usually good at resolving such disputes." 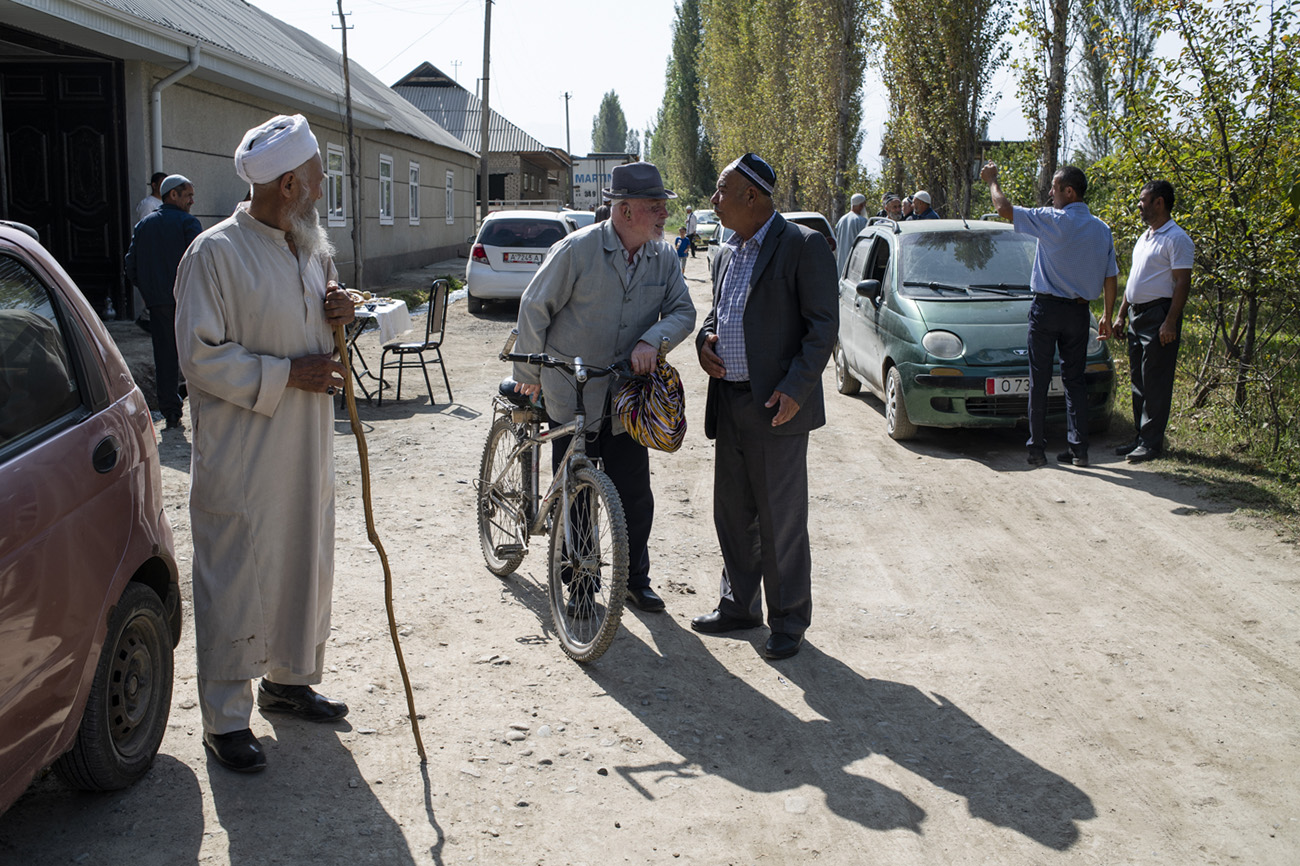 The mosques have a role to play in tamping down the unease too, he said.