Officials say Sapar Isakov is being questioned as a witness as part of a probe into the modernization of a power plant. 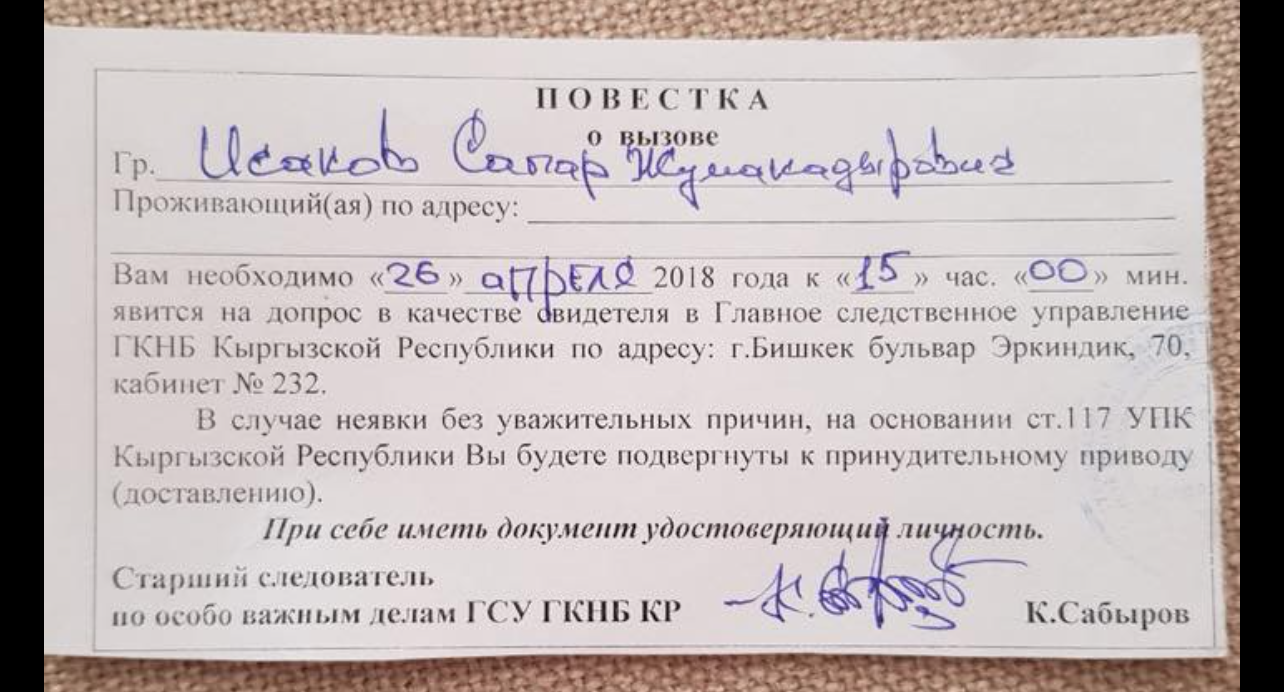 The former prime minister of Kyrgyzstan, who was ousted only days ago by parliament, has been summoned for questioning by the security services in connection to an investigation into the refurbishment of a power plant.

Sapar Isakov posted a photo of the summons slip on his Facebook page on April 26.

A spokesman for the State Committee for National Security told Eurasianet that Isakov is being questioned as a witness as part of an ongoing probe into how the contract was granted for the modernization of the Bishkek Thermal Power Station.

Lawmakers overwhelmingly backed a motion of no-confidence in Isakov’s government on April 19. The sudden downfall is being read in the broader picture as the result of machinations by President Sooronbai Jeenbekov to squeeze loyalists of his predecessor, Almazbek Atambayev, out of top positions.

The Bishkek power plant has been at the center of considerable public anger since a technical fault in January knocked the city’s heating system offline, plunging countless homes into a deep freeze during some of the coldest days of the year. The malfunction began to raise questions about how the $386 million overhaul, which was completed last year, had been done and how the Chinese company that did the work managed to secure the contract.

In 2015, the Chamber of Audits, a state body tasked with overseeing government spending, issued a report questioning why the contract was not put out to tender when other companies were interested in bidding. Auditors also found that no technical feasibility study was undertaken to evaluate the needs and costs of the project.

The work on the Bishkek power plant was started and completed well before Isakov’s premiership, which only began in August 2017. Before serving as PM, Isakov was chief of staff in the Atambayev presidential administration.

While he was not in any evident way connected to the modernization program, Isakov has been object of much criticism for his perceived failure to oversee efficient preparations for the heating season and thereby allowing malfunctions at the power plant to occur under his watch.