Atambayev's supporters say they will go to any lengths to stop his arrest. 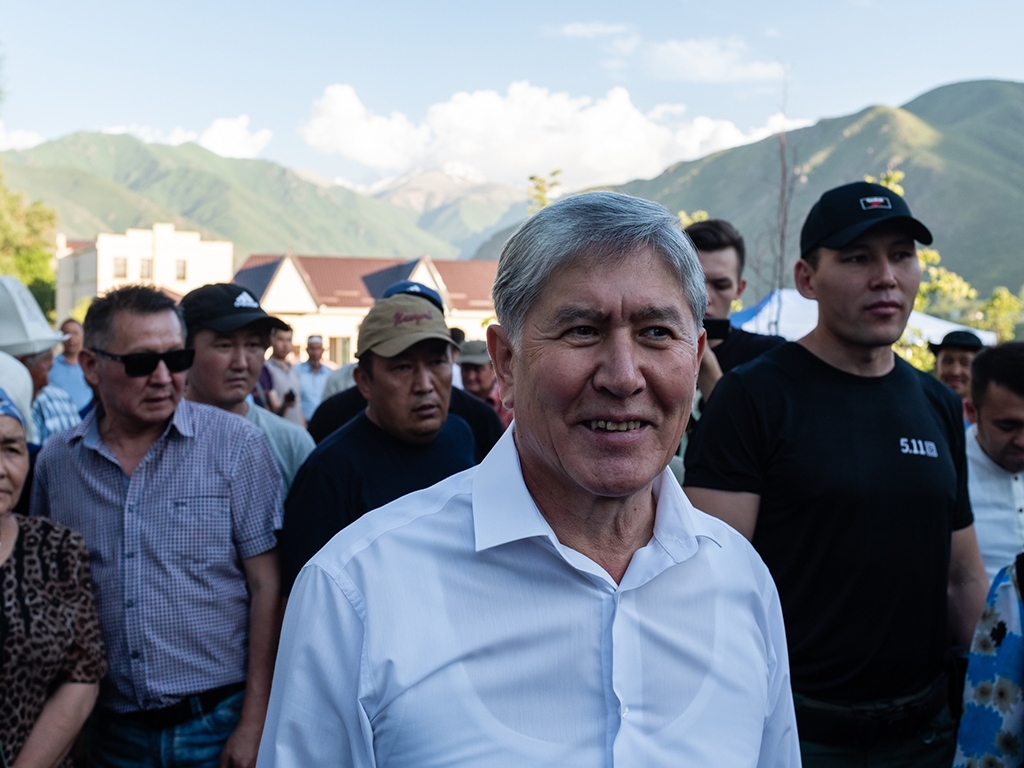 Last stand: Almazbek Atambayev with his supporters in Koi-Tash. (All photos by Danil Usmanov)

From early in the morning on June 26, groups of people starting trickling to the countryside home of Kyrgyzstan’s former president, Almazbek Atambayev.

There was only one thing on their mind as they arrived in Koi-Tash, a village not far from the capital, Bishkek: the proceedings to revoke Atambayev's immunity status playing out in parliament. Soon after lunchtime on June 27, the MPs pulled the trigger, leaving the embattled former head of state exposed to arrest.

Lawmakers claim the ex-president is guilty of a string of crimes, including corruption, expropriation and aiding the flight from prison of a senior crime boss. Atambayev says this is all a plot cooked up by his protégé-turned-nemesis, President Sooronbai Jeenbekov. 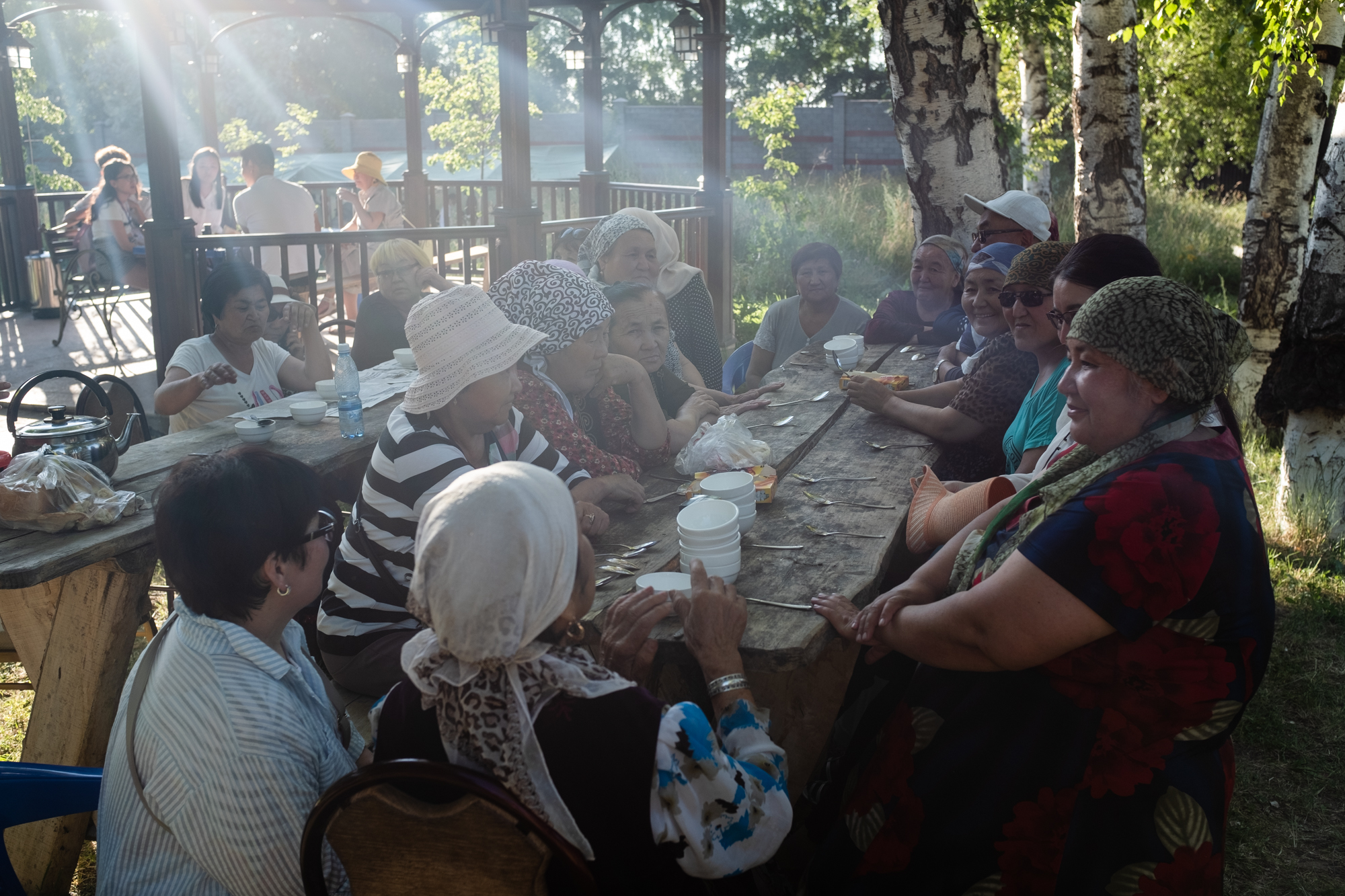 Young men trained doing flips and pull-ups on an exercise bar. The older people pulled up chairs to discuss politics and prepared snacks and tea for new arrivals. One woman brought a cow to slaughter, cook and dole out to those present. Just before midnight, a dozen men on horseback arrived.

These are Atambayev’s hardcore loyalists – those who will be waiting if and when the police should come carrying handcuffs.

While this self-styled last line of defense arrayed itself across the grounds at Koi-Tash, Atambayev conducted his business in one of the rooms of the home. His associates chatted in clusters around the garden.

Atambayev was eager that journalists be present for all this, so he set up a press center in a giant yurt. His security team took no risks, making all comers pass through a metal detector. Once inside, few failed to remark on the opulence and natural beauty of the mountainous setting. As it happens, the land on which the house is built is one of the things that lawmakers accuse Atambayev of acquiring through shady means. 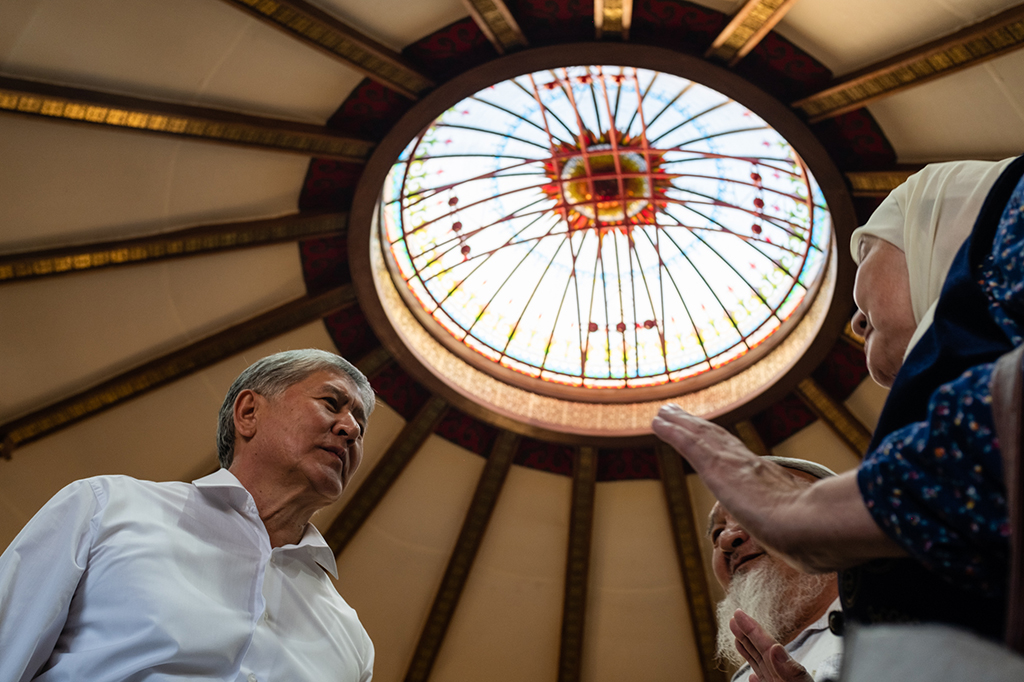 If Atambayev was nervous, he was not showing it. From time to time, he emerged smiling to glad-hand his supporters. He gave little speeches, took pictures and accepted blessings from the community headsmen, the aksakal.

In an interview to a small gaggle of journalists, he was categorical that he would do all it takes to defend his honor.

“If today I submit to this clannish, family mafia, then most of Kyrgyzstan’s people will lose heart. At least one person should show the example – that you have to stand up for your honor until the very end. I believe it is better to die standing than live on your knees,” Atambayev said, reprising one of his favorite phrases.

What has often happened in such situations is for a politician or businessperson who knows their arrest is imminent to leave the country. But that will not do for Atambayev.

"This is my land, I lived here, and I will live here. Because my dream has always been that I should live and die and be buried here too. This is my land, this is my homeland, Kyrgyzstan. Let the truly corrupt officials and thieves who are now establishing a family-clan rule in Kyrgyzstan leave. They should leave. Why should we leave?" 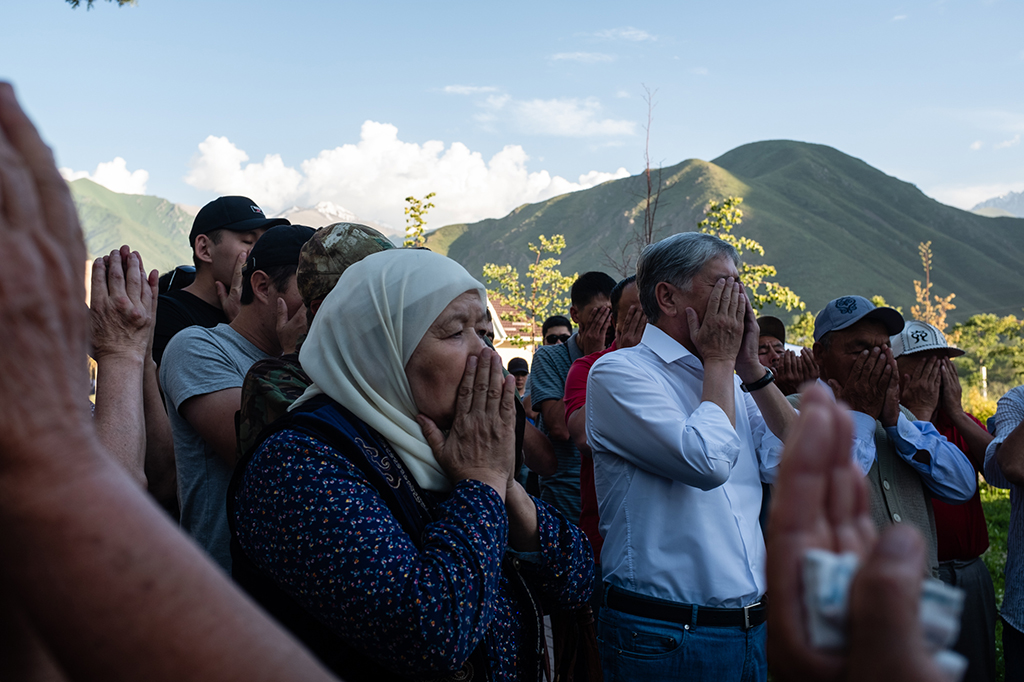 That position is enthusiastically shared by those assembled in Koi-Tash.

Baktygul Bolokbayev, a 46-year-old from Bishkek, said he came to defend Atambayev from the “outrages of the current government.”

"If everything keeps on going on as it is today, without any evidence being produced, with [accusations] based on the witness testimonies of some traitors, on the testimony of those who betrayed him, well, personally I will not just stand around and look on,” Bolokbayev said. “The main thing is that I will give him my moral support, and I will try to do that within the legal framework.”

Altyn Ibraimova, a long-time supporter of Atambayev who took part in the April 7, 2010, uprising that brought him to power, is explicit about her willingness to use any means necessary to prevent her leader’s arrest.

“We are here for that express purpose – to protect Almazbek Atambayev. And we are willing to do this physically,” she said. 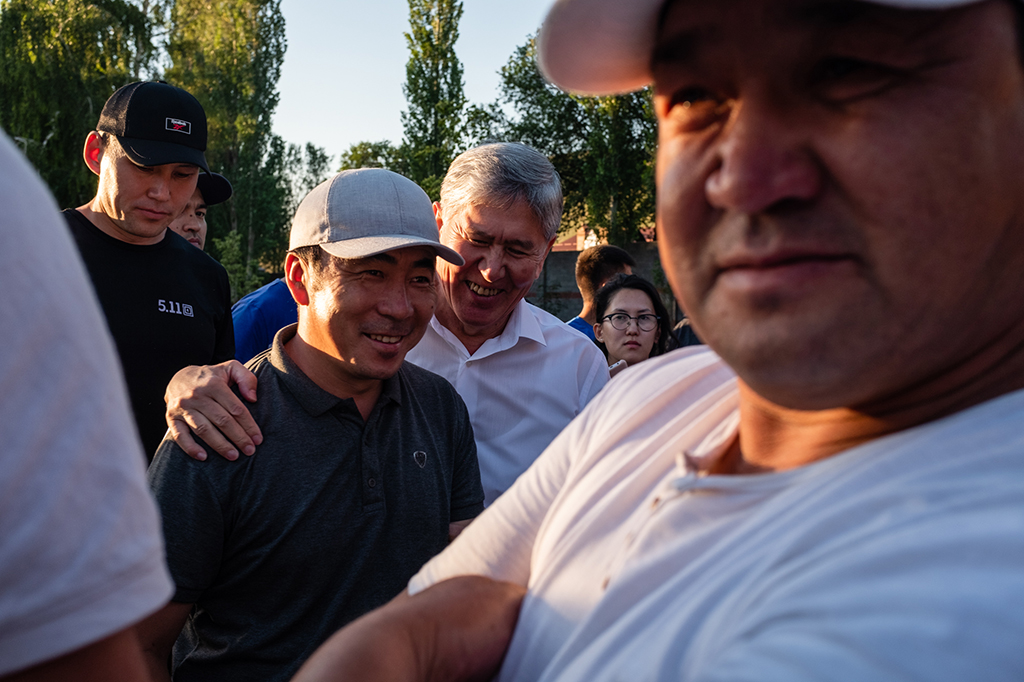 Atambayev’s trusted, long-time lieutenant, Farid Niyazov, exudes a more complaisant air, insisting that nothing unorthodox is being planned in the event of arrest. That notwithstanding, journalists could not help spotting the checkpoints outside the house and the trucks offloading piles of stones that were later hidden under piles of straw.

Officials from Social Democratic Part of Kyrgyzstan, or SDPK, which was created by Atambayev, insisted the rocks had been brought in for building work.

Atambayev is in bullish but reflexive mood. He is bitter about how so many of his closest allies could have turned against him.

"There was an agreement with Sooronbai Jeenbekov that he would simply perform the role of older brother and help out the government led by Prime Minister Sapar Isakov, who was 39-years-old. That was the idea. It turned out that the man just needed power. I didn't realize this was going on under my very nose," Atambayev said.

That is certainly one interpretation. Atambayev was only allowed to serve one term, so when elections were looming in late 2017, he scanned the field for a handpicked successor who he thought would prove pliable and enable him to continue playing a hand in running the show. Jeenbekov, a dour and uninspiring presence, seemed to fit the bill. For safe measure, Atambayev left behind another loyalist, Isakov, who is now 41, in the prime minister’s chair. The plan seemed to be that Isakov, a smooth and wealthy technocrat type, could himself one day become president.

But things went wrong very quickly. Jeenbekov turned out to be his own man. In short order, he fired and then jailed Isakov on corruption charges. Several other Atambayev cronies met the same fate. 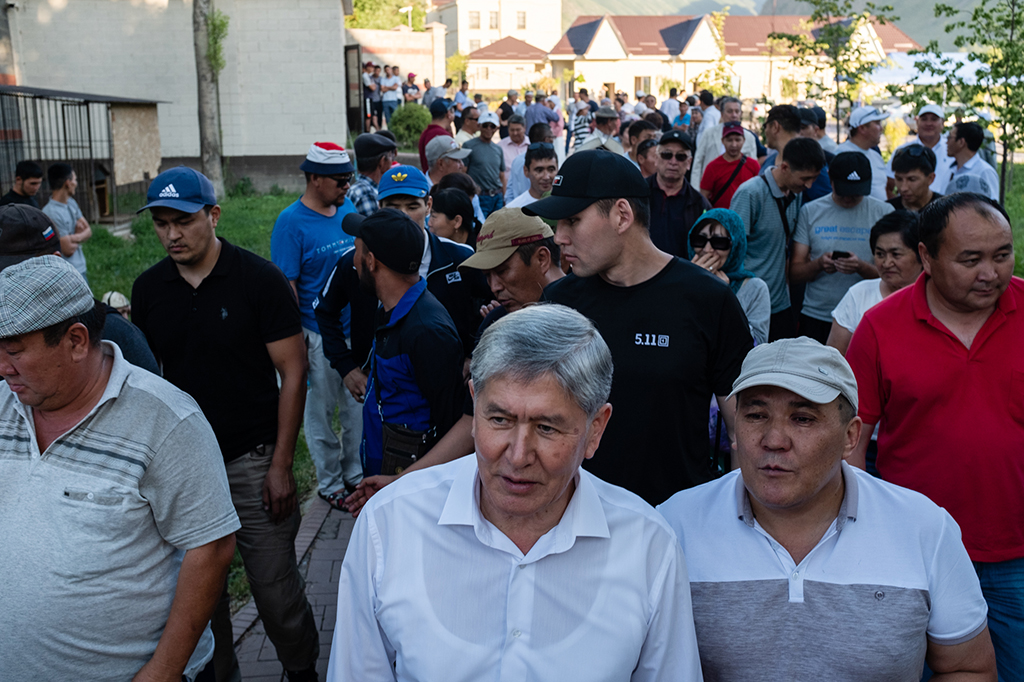 If he is galled by Jeenbekov, Atambayev reserves his real bile for the family of an official called Rayimbek Matraimov, but better known as Rayim Million, a reference to the man’s reputedly immense wealth. Matraimov was once a top official in the customs service and is deemed by many to have been one of the most corrupt officials in Kyrgyzstan’s short history.

“Back in my day, Matraimov hid, but where is he today? Now all of parliament and the leadership in government go to pay tribute to Rayim, because there is another president. They hurl a lot of dirt at me, and many people sadly believe it, but I am an honest man,” said Atambayev.

In Atambayev’s telling, Jeenbekov has embarked on a politically motivated campaign of arrests against his opponents. This is an awkward narrative, however, since Atambayev could very easily be accused of doing the same during his tenure, which lasted from 2011 to 2017. One notable case was that of Omurbek Tekebayev, leader of the Ata-Meken party, who was sentenced to eight years in jail in 2017 on corruption charges that were widely seen as a political hit-job.

When he muses about what he believes are the fortunes of this incumbent government, Atambayev takes an optimistic – for himself – line.

"The truth is stronger than anything else. The truth will always win. Given how fast everything is happening in Kyrgyzstan, a government like this will collapse. It is in the stage of self-destruction,” he said.

Every time he wandered out into the garden to receive another blessing from his supporters, Atambayev appeared to become ever more convinced of his inability to be impeached and the rectitude of his conduct. He enjoyed the prayers recited in his honor. 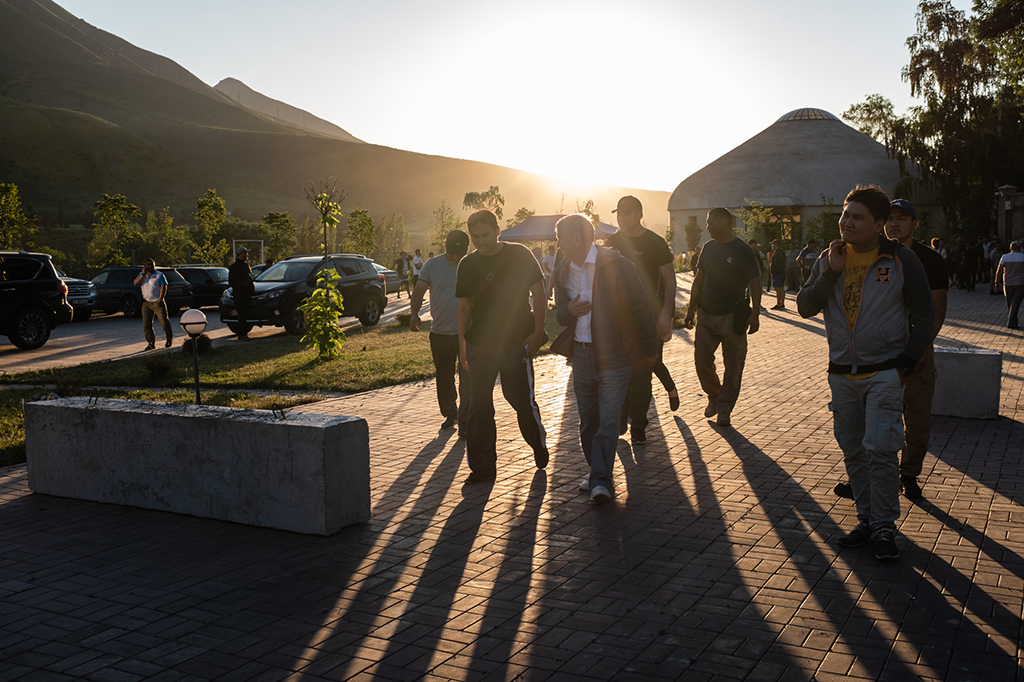 “Those that were by your side for 20 years have revealed themselves to be such turncoats,” recited one aksakal. “The people believe you have no blame in this. That these individuals wormed their way in and then became a hindrance to you and just worked toward their own ends. Let there be no more such corrupt people, such hypocrites. May God cleanse us of all of them. Amen!”

“Amen!” said the crowd in a refrain, before turning once again to hug and take photos with Atambayev.