The government must either admit it is subordinate to Moscow or risk provoking its ire. 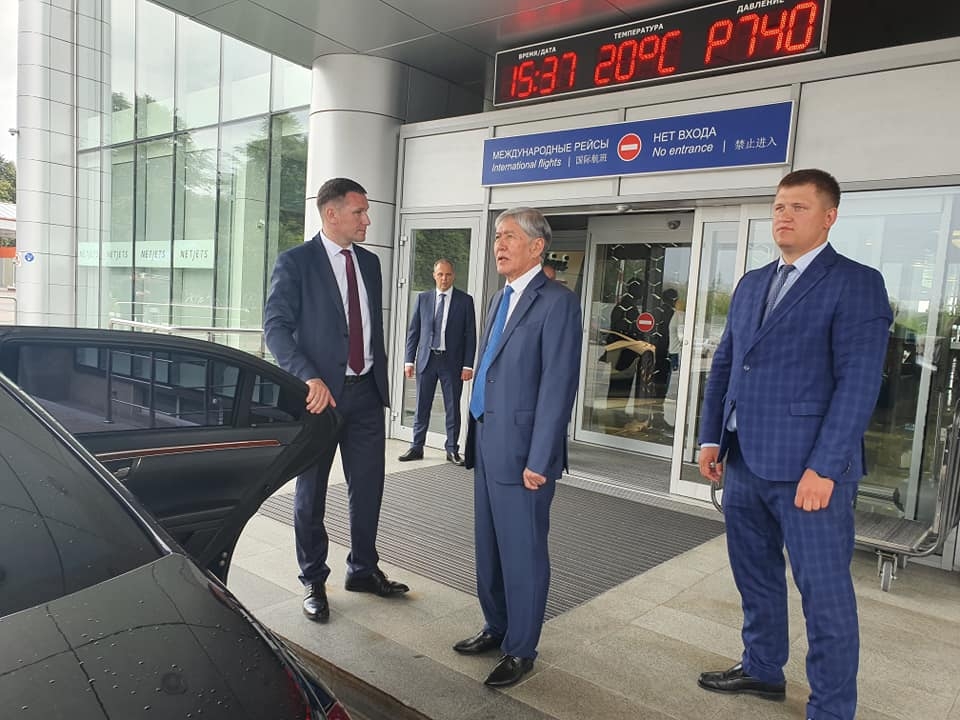 As promised, Kyrgyzstan’s embattled former president has returned to his home country – where he has for weeks been facing down potential arrest – after meeting with and receiving moral support from his old friend, Russian President Vladimir Putin.

Almazbek Atambayev on July 25 flew into Russian-controlled Kant military airbase, where he was met in the evening by a crowd of his supporters. He left from the same airport one day earlier on a Sukhoi Superjet 100.

With Putin’s call for the Kyrgyz government to refrain from pursuing any criminal actions against him in the interest of political stability still ringing in his ears, Atambayev will breathe a little more easily. If he indeed submits to Moscow’s will in this matter, however, incumbent President Sooronbai Jeenbekov will expressly be conceding his nation’s limited sovereignty.

Atambayev and Jeenbekov used to be allies, but that friendship soured rapidly in early 2018. In the wake of that falling-out, a number of Atambayev’s allies were fired or arrested. In June, parliament overwhelming voted to strip him of immunity from prosecution, a development that was widely assumed to be a precursor to his detention on a number of corruption and abuse of office charges.

If nothing else, Atambayev distinguished himself in his six years in office, which ended in November 2017, for his slavish devotion to Moscow and Putin. This unwavering personal commitment appears to have paid off.

Atambayev was coy about whom he planned to see in Russia when he was departing Kyrgyzstan on July 24, saying only that he intended to meet senior officials. But when he was met at the airport in Moscow by the Federal Protective Service, which provides security details to top Russian state officials, it became evident he was not bluffing. The detail took him directly to the Kremlin, where he was met by Putin for talks about the political situation in Kyrgyzstan.

In a statement after this encounter, Putin cautioned that Kyrgyzstan had already been through two revolutions – in 2005 and 2010 – and that it would be best to avoid another.

“The country needs political stability. Everybody needs to unite around the current president and to help him develop the state. We have many plans for cooperation with Kyrgyzstan and we are absolutely determined to work together with the current leadership to fulfill these plans,” Putin said.

Atambayev then said that Putin had committed to speak with Jeenbekov to urge him to refrain from pursuing criminal investigations against political opponents. He clearly had himself in mind among those opponents.

“The current government needs to … show objectivity in consideration of cases in courts and to stop the political prosecution of opponents. My supporters should be able to calmly prepare for the elections. Vladimir Vladimirovich Putin intends to talk about this with Sooronbai Jeenbekov,” Atambayev said.

Arkady Dubnov, a Moscow-based journalist who has covered Central Asian affairs for decades, said that Atambayev appears to have succeeded in getting Putin to act as his guarantor.

“I think the legal persecution of Atambayev will not come to an end, but it will not be as brutal as it has been until now. As far as his clan is concerned, things will be carried out more gently and civilly,” Dubnov told Eurasianet.

By agreeing to meet with Atambayev, Putin has clearly demonstrated a level of support for him. By the same token, Putin’s remarks indicate that he is still committed to partnership with Jeenbekov and that it would behoove Atambayev to refrain from excessive criticism of his successor, Dubnov said.

Will the former head of state be able to control his sharp tongue, however? He has shown no discipline in the past.

“Accepting Jeenbekov as a No. 1 figure remains something that Atambayev cannot swallow. He is incapable of accepting reality,” Dubnov said.

And there is still the matter of multiple police summonses for Atambayev to contend with. Police requested on three separate occasions that he submit to questioning over the early release from prison in 2013 of crime boss Aziz Batukayev. They were snubbed each time.

Atambayev may now feel he enjoys sufficient impunity to brave whatever investigators have in store for him. Or he may feel nonchalant enough to thumb his nose at the authorities.

And Jeenbekov faces a dismal choice. Bowing to Moscow’s will and showing that his government is unable to independently pursue its own policies. Or to risk provoking the ire of the Kremlin.