The Interior Ministry has wrapped up its investigation into the bloody unrest at the former president’s compound last summer. 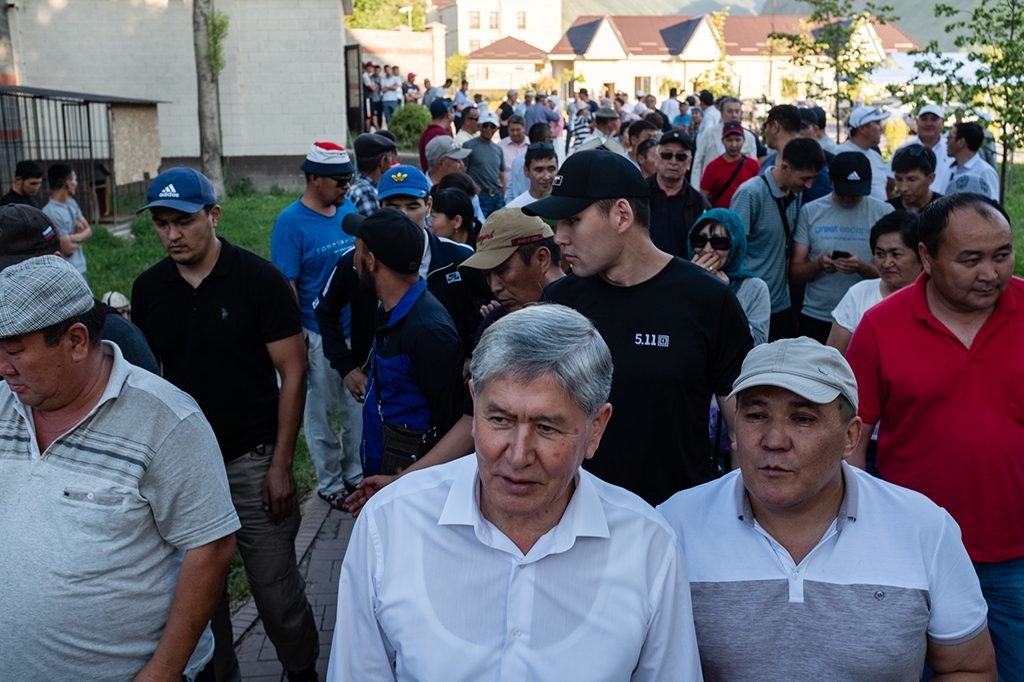 Atambayev, center, with his supporters at this country residence in June. (Photo: Danil Usmanov)

Kyrgyzstan’s former president Almazbek Atambayev is finished, that much is certain. The only question is how many people he takes down with him.

On January 10, the Interior Ministry gave notice that it had wrapped up its investigation into the bloody unrest that ensued last summer, when Atambayev forcefully resisted being taken away from his country residence for police questioning.

It is now the turn of the courts to do their work.

Eleven people are in the dock alongside Atambayev on charges of involvement in the trouble at Koi-Tash. They include two lawmakers, a spokeswoman for his political party and a bodyguard allocated to him by the state.

Atambayev alone is accused on eight separate counts. The case files span across 50 volumes. The most serious charge is for the murder of a special forces commander killed during a failed storming of the compound in Koi-Tash, a village just outside the limits of Bishkek.

The former president’s lawyer, Sergei Slesarev, was candid about the fact that the defense will struggle to pore through all the case materials.

More likely, investigators “will start to push us and respond to any of our comments with accusations that we are stalling,” he told journalists January 14.

The trial is likely to be held behind closed doors.

Going by past form, Atambayev will treat proceedings with the contempt he has reserved for an ongoing trial in which he stands accused of fraudulently facilitating the early release of a notorious crime boss who later fled to Russia.

It was that case that had precipitated the Koi-Tash standoff in the first place. Police had requested Atambayev present himself for questioning on three separate occasions, only to be rebuffed each time. In the face of that defiance, the authorities felt compelled to dispatch crack troops with the State Committee for National Security, or GKNB, to snatch Atambayev from his fortified residence.

Atambayev had justly suspected he was wanted for more than just questioning. In November, he went on trial over the case of the released crime boss but refused to turn up to hearings.

He was eventually made to attend through force but refused to speak.

His position is that both trials are hitjobs orchestrated by his successor and one-time ally, Sooronbai Jeenbekov. Atambayev stepped down as president at the end of his single permitted term in late 2017. Before doing so, he gave his endorsement to Jeenbekov, a man who had served him as prime minister, in the belief that the dour lifetime bureaucrat might prove a figure liable to doing his bidding.

Jeenbekov had other ideas, however, and quickly asserted his own authority. When Atambayev bristled at this perceived betrayal, Jeenbekov acted swiftly in sidelining and jailing many of his predecessor’s closest allies still in government.

The Koi-Tash trial is by far the more serious of the two legal battles that Atambayev is waging. Lifetime imprisonment feels like a real prospect.

In addition to the murder charge, there are accusations of hostage-taking, attempted murder, sowing mass unrest and resisting justice.

It is not all clear-cut though. There is still significant confusion over who did what during the violence that culminated with the killing of Usenbek Niyazbekov, the deputy head of the Alfa special forces.

Atambayev appeared to implicate himself in that murder on August 8, when, prior to his arrest, he told journalists that he fired as special forces troops were climbing the stairs of his house in darkness.

He asked authorities to spare his supporters, many dozens of whom were involved in chaotic siege of Koi-Tash and the capture of several Alfa troops.

Some of Atambayev’s closest political allies, spokeswoman Kunduz Joldubayeva and lawmakers Irina Karamushkina and Asel Koduranova are under house arrest ahead of the impending trial. They face accusations of attempting to seize power and many other charges.

Another ex-lawmaker, Ravshan Jeenbekov, is being held in a pretrial detention facility on the same charges.

State-allocated bodyguard Kanat Sagymbayev is standing trial on 11 counts, of which the most serious is that he helped murder Niyazbekov.

Like his co-defendants, Sagymbayev rejects the charges levelled against him. He insists that he had received no prior notice from his then-employer, the same GKNB that mounted the Koi-Tash siege, that he was expected to stand down from his duties as Atambayev’s protector.

The men in balaclavas who scaled the walls of the compound on the evening of August 7 “failed to introduce themselves,” he has said.

It is Atambayev’s steadfast allies, who many would argue have fallen victim to the former president’s hubris, that have generated a dose of public sympathy.

Scenes of single mother Joldubayeva kissing her daughter ahead of what she anticipated would be her arrest at the end of the year stoked anger on social networks.

Ryskeldi Mombekov, a popular lawmaker, called the case against the three women absurd.

For all the blame laid at Atambayev’s door, the national leadership has not escaped recrimination.

The Koi-Tash operation was a fiasco, as officials involved in its preparation freely admitted. Even as the embers were still smoking at the compound, GKNB chief Orozbek Opumbayev offered his resignation, only to have it rejected by Jeenbekov.

There are also questions about whether the GKNB should even have been involved in the first place. Atambayev had at that time been accused of no crime and it fell to the police to enforce their summons.

Any violation of process by the state is unlikely to get much scrutiny at the trial, however. The question was barely addressed during a state commission on Koi-Tash that was composed mainly of state officials and lawmakers loyal to Jeenbekov. That body largely agreed that Atambayev was responsible for everything that happened, according to Klara Sooronkulova, a former Supreme Court judge invited onto the commission.

“If this is a commission involving the public, there should be more information,” Sooronkulova said in September, when she complained of being sidelined in the process.

“The more fog there is, the more doubts there will be.”