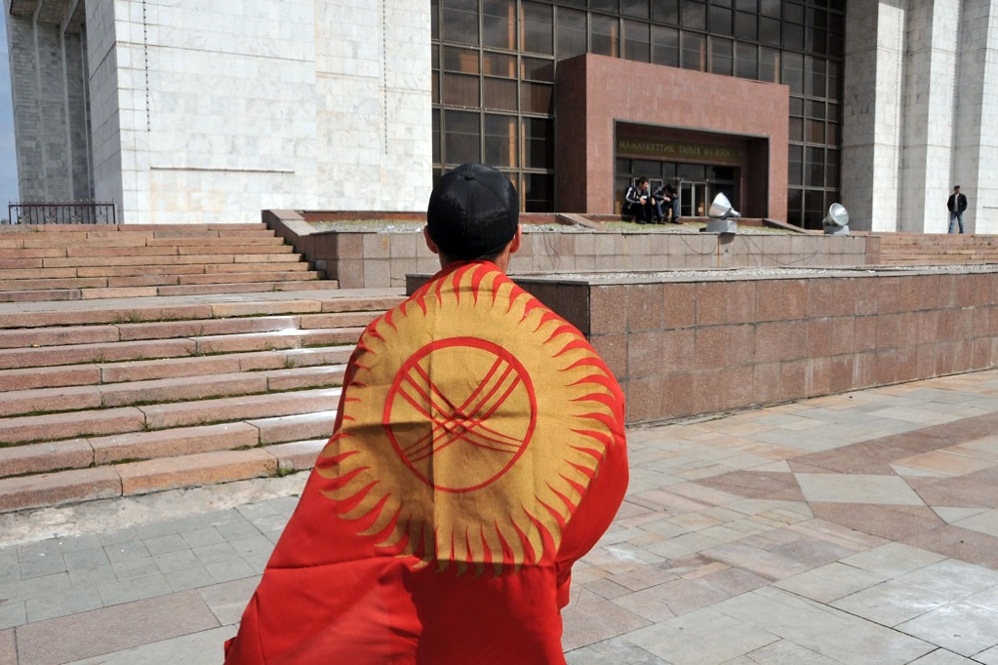 With marauding bands continuing to rule the night in Bishkek, and Kurmanbek Bakiyev making mischief in his southern stronghold, Kyrgyzstan's new leaders are facing the prospect of a prolonged period of strife in the Central Asian state. Some experts say they are worried that continuing disorder in the country could exacerbate long-simmering regional tension.

The interim government headed by Roza Otunbayeva is struggling to bring order to the capital, which erupted in mob violence on April 7, causing the collapse of the Bakiyev administration. [For background see the Eurasia Insight archive].

Otunbayeva, in a statement made late April 8, claimed that the provisional government was in control of Bishkek. "Police and armed forces will keep the peace tonight," said Otunbayeva, according to a post appearing on Twitter social networking site. But Otunbayeva's words rang hollow in many Bishkek neighborhoods, as heavily armed groups roamed the streets for a second straight night April 8-9, engaging in looting and firing bursts from automatic weapons. According to local media reports, the interim interior minister, Bolot Sheriniyazov, has given authority to regular police, as well as to provisional government-backed militia groups, to shoot suspected looters.

Meanwhile, a day after his downfall, Bakiyev began slinging verbal darts at his longtime political enemies. He has established himself in the southern region of Jalal-abad, which has long been his primary power base. From there, he sounded a defiant note on April 8, insisting that he remained the lawfully elected president and refusing to resign. "I do not admit defeat in any way," Bakiyev said in an interview with the Russian radio station Ekho Moskvy. At the same time, he admitted that he no longer controlled "any real levers of power."

The existing circumstances have the potential to fan sectional hostility. Tension has long been a prevailing feature in relations between residents of Kyrgyzstan's northern and southern regions, which are divided by the Tien Shan mountain range. The two regions have significant economic and social differences. The north has traditionally been more industrialized and receives a majority of the country's business investment; the south is poorer and ethnically more diverse, with a large Uzbek minority.

During the roughly five years that Bakiyev was in power in Bishkek, many in the capital grumbled about the president's use of patronage to promote his allies from southern areas. Southerners in particular gained greater access to economic opportunities during Bakiyev's tenure. Many northerners, long used to controlling the economy, resented the realignment. As a result, anti-southern slurs were commonly heard in Bishkek in recent years. In turn, southerners have continued to gripe that northern regions receive an unfair share of the government's economic attention.

It's worth noting that sectional tension was a major factor in stoking the Tulip Revolution in 2005, in which opposition protesters toppled former president Askar Akayev's administration. Akayev, now living in exile in Russia, is a northerner.

According to David Gullette, an anthropologist who has been working on Kyrgyzstan for the past decade, sectional differences have been vulnerable to political manipulation. "North and South are often pitted against each other in Kyrgyzstan. Yet, this is not so straightforward," Gullette said. "The elite have often cultivated and played on these identities for their own purposes."

Now it seems that it is Bakiyev's turn to play the sectional card. Many political experts in Kyrgyzstan do not believe Bakiyev has a realistic chance of regaining power, but he may be able to make life miserable for the leaders of the provisional government.

Bishkek-based analysts say the longer the instability continues, the harder it will be for the new government to restore order. "If the opposition leaders are unable to consolidate power and restore order quickly, Bakiyev could use this to his advantage to create a power struggle fought in the streets," said Gullette.

Given the looting and the conflicts between police and civilians, "there are chances of destabilization and the beginning of a civil war. The situation today is not benefiting the provisional government. I think there is a high chance of a south and north division," said Alexander Knyazev of the CIS Institute in Bishkek.

Other experts point out that the disturbances that prompted the collapse of the Bakiyev administration all occurred in the North, in cities such as Bishkek, Naryn and Talas. The South's major cities, Osh and Jalal-abad, were generally quiet during the April 6-7 upheaval. "There is a division already because the south didn't support the north. The taking of the power happened locally in the north," said Zamir Osorov an investigative journalist with the MSN newspaper in Bishkek.

One solution, Knyazev said, is to change the whole structure of governance because "Kyrgyzstan is a very diverse country. The courts and parliament should have more power and the president's power should be decreased. First of all, in order to arrest Bakiyev, the temporary government should demonstrate its lawfulness and prepare judicially all the necessary documents using legitimate means. They should demonstrate they are ready to work lawfully. But for now I think there are more important things, which is to stabilize the situation in the city and stop looting."

"There shouldn't be only one ruler and I think it is correct so far that the temporary government didn't appoint anyone yet [as president]," he added.