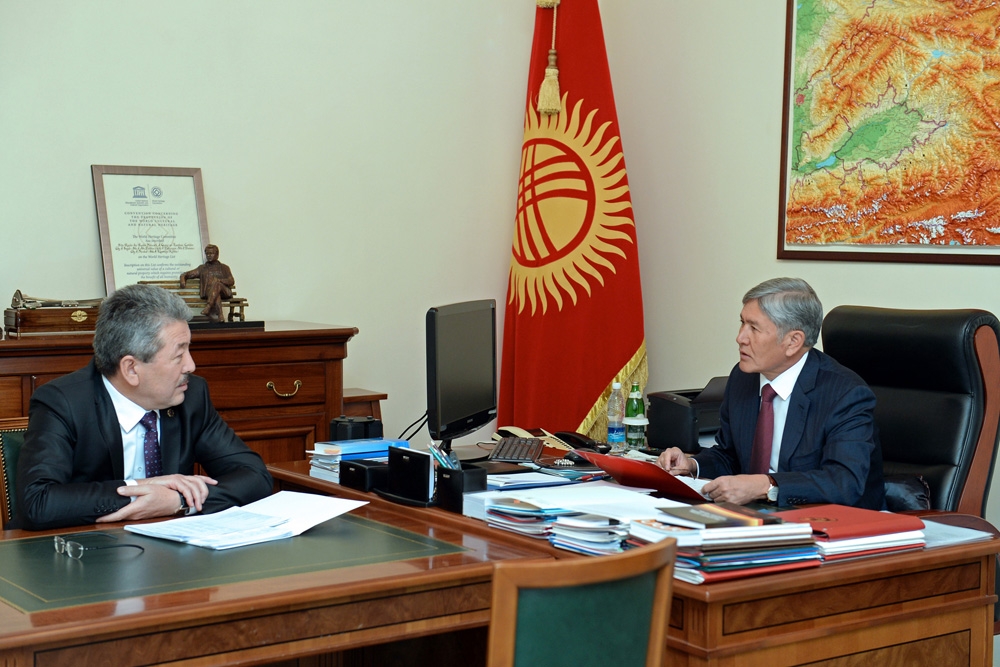 In mid-September, the Finance Ministry revealed that the national debt has risen, in dollar terms, to $4.07 billion. Officials have said that although the debt-to-gross domestic product ratio is 68 percent in terms of Kyrgyz som, it is a markedly lower 60 percent in dollar terms — a data point regularly provided by way of reassurance.

But as Edward Gemayel, who has headed several IMF missions to Kyrgyzstan, pointed out on September 28, the rate of increase in the country’s debt burden is worrisome.

News website Knews.kg cited Gemayel as saying Kyrgyzstan’s sovereign debt has soared in the past few years from around 43 percent of debt-to-GDP to its current level of 70 percent — a figure greater than allowed for by Kyrgyz officials.

“This arouses concern, although according to our estimates, there is still [only] a moderate risk of debt distress. But it has reached the point when it could easily tip over into high debt risk, which would mean a rise in the cost of attracting loans,” Gemayel said in remarks translated into Russian. “With regard to fiscal sustainability … the ability of the government to use its limited resources for social and economic development is contracting as a consequence of the need to spend more money on servicing debts.”

To put some of these figures in context, the Finance Ministry stated at the start of September that since 2011, the government has spent almost 74 billion som ($1 billion at the current rate) on servicing external and internal debts.

Most of those repayments are addressed at repaying foreign loans, mainly to the state-run Exim Bank of China, which is owed around $1.4 billion. Another $640 million or so is owed to the International Development Association, a branch of the World Bank focused on development in poor countries.

And the proportion of foreign repayments is rising steadily. The share of domestic repayments has been falling accordingly since 2013, even though internal debt has risen two and half-fold over the past six years, according to the Finance Ministry.

Economic observers remain reasonably sanguine about the issue for now.

“In spite of the debt increase, the debt’s structure and diversification are satisfactory. Most of the long-term debt is concessional and the short-term debt was just 1.1 percent of GDP and 2.8 percent of budget revenues in 2015, hence we foresee no substantial credit risk to the economy in the short run,” Germany-based rating services company Rating-Agentur Expert said in an end of July note.

The government has openly stated that its lavish borrowing is aimed at financing its ambitious development program, as outlined in the National Sustainable Development Strategy for the Kyrgyz Republic 2013-2017. This strategy envisions major investments for agriculture, communications and transportation.

“The economy needs the means for improving and developing infrastructure. The fact is that many things are left over from the Soviet Union, but they are in a dilapidated state and need replacing. We are talking about roads, hydropower plants, utility networks and so on,” Deputy Economy Minister Almaz Sazbakov said in May. “For the construction and reconstruction of roads alone, around $2 billion has been spent.”

Perhaps the most emblematic project to date has been the 405-kilometer high-voltage Datka-Kemin power line, built with $390 million provided by the Exim Bank of China. The vision behind this project was to decouple Kyrgyzstan from the region’s Soviet-build power grid by connecting electricity distribution infrastructure in the north and south. While completion may have come at a great financial cost, it has ensured Kyrgyzstan’s power independence from Uzbekistan, giving it additional leverage in the countries’ periodic diplomatic disputes.

Ominous injunctions from the IMF are nothing new. In July, the fund warned Bishkek to undertake more measures to keep a lid on its deficit via efforts to increase revenues and control expenditures.

One area of current concern was the recent introduction of a sales tax (VAT) exemption on imported grain, which the IMF described as counterproductive. Gemayel this week spelled out the consequences of the grain VAT exemption, saying it had cost the government 600 million som ($8.8 million) in tax revenue.

While the government struggles to raise revenue through taxes, it has proven profligate in some high-profile expenditures. Large amounts were spent on the recent Nomad Games       on Issyk-Kul, a costly jamboree that authorities justified as an investment into the country’s tourist potential. Gemayel alluded to the games and this month’s Commonwealth of Independent States summit in Bishkek as examples of the kind of investments that Kyrgyzstan should be refraining from.

Failure to capitalize on the potential tax base and contain spending was bad enough when the economy was in relatively good health, but the knock-on effects of the slowdown in Russia are causing growth to sag.

In July, the IMF said that it saw economic growth reaching 2.2 percent in 2016 — a marked revision downward from an earlier forecast — and a drop from the 3.5 percent recorded in 2015. The fall in economic activity, a rise in inflation and poor public finances contributed to a decline in Kyrgyzstan’s global economic standing. In the latest Global Competitiveness Index compiled by the World Economic Forum, Kyrgyzstan fell to 111th place, down from 102nd place last year.