Concession-owners at another goldmine, Jerooy, say production may start this year 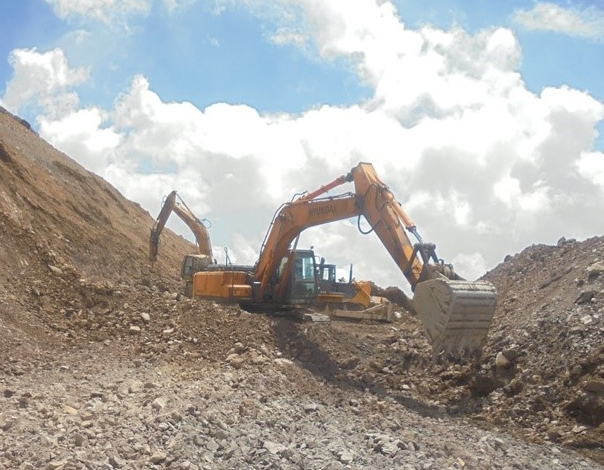 The start of production is beckoning at Kyrgyzstan’s second-largest goldmine, the owner of the concession has announced.

News that Jerooy could start turning out gold by the year’s end could not have come at a more auspicious time. Last week, the International Monetary Fund sounded the alarm about the country’s most important goldmine, Kumtor, warning that output there is set to collapse within the coming few years.

In 2018, Kumtor alone accounted for around 8.5 percent of Kyrgyzstan’s entire economy.

Jerooy mine operator Alliance Altyn, a subsidiary of Russian Platinum, said in a progress update on March 25 that it was spending $273 million on construction. Overall investments in Jerooy, which is estimated to hold up to 100 tons of gold reserves, will come in at $593 million.

Those figures are promising, but the mine will not come close to plugging the gap left by the withering of Kumtor, which is operated by the Toronto-listed Centerra Gold, a company one-quarter owned by the Kyrgyz government.

An IMF statement from March 20 warned that the demise of Kumtor as a significant contributor to the national coffers is imminent.

“Gold which accounts for 38 percent of exports proceeds could fall sharply in 2023 if Kumtor output is not replaced,” the statement read.

Processing operations at the high-altitude mine will continue until 2026 at least, according to Centerra. Discussions about an extension of the mine's operating life were ongoing between the government and Centerra as recently as 2017.

But potential extension of Kumtor has been complicated by growing concerns about the damage the project is doing to glaciers surrounding the mine. And Centerra’s management and shareholders seem ever-more exhausted by their tortuous negotiations with Bishkek over ownership and how much the mine should pay the government.

Despite these troubles, Kumtor’s role in holding up Kyrgyzstan remains undiminished.

In 2011, the mine produced 18.7 tons of gold and accounted for 12 percent of gross domestic product. Production slipped somewhat last year, to a still-respectable 16.6 tons.

Alliance Altyn’s chief executive Mikhail Shubin has acknowledged that Jerooy’s output would be far more modest — somewhere in the annual range of 3.5 to 5 tons.

Like most mining projects in Kyrgyzstan, Jerooy is late coming on line. Alliance Altyn has been fined hundreds of thousands of dollars for the delays.

Shubin has suggested that the holdup was connected to the government moving the goalposts on legislative and bureaucratic compliance. This is a relatively common complaint among mining firms.

All things considered though, Alliance Altyn has reached this stage relatively untarnished following its $100 million purchase of the mine in 2015. Mining companies have traditionally struggled in their dealings with the local community in the western Talas region, where the Jerooy reserves are located. Ill-will is often generated by perceptions that outsider investors are profiting handsomely, while offering just pollution and scant levels of employment in return.

Another previous obstacle to Jerooy’s development – a legal wrangle between the Kyrgyz government and a former license-holder  – was settled out of court the same year that Alliance Altyn moved in.

Few mining companies have enjoyed such a smooth ride in Kyrgyzstan.

Last April, 12 people were arrested on suspicion of involvement in an arson attack on a gold-processing facility in the southern district of Toguz-Torou, where residents had opposed the construction of the facility on environmental grounds.

That incident brought back memories of a host of similar clashes between companies and communities in the years after Kyrgyzstan’s 2010 revolution.

The persistence of such flare-ups suggests Kyrgyzstan will need to find something other than lucrative mining projects to energize its economy.