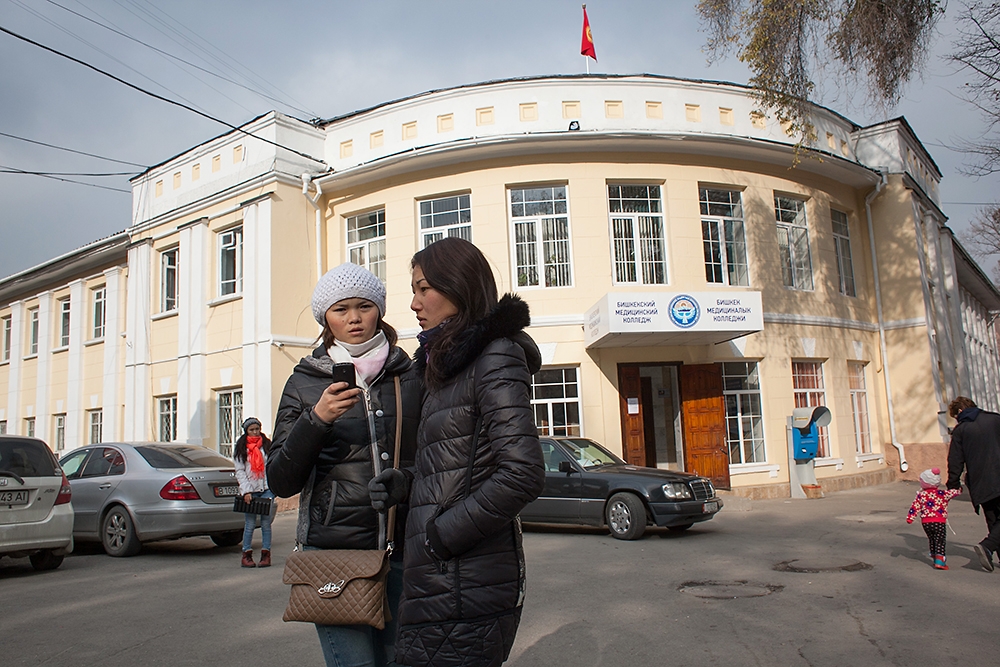 “Only two universities in Kyrgyzstan are worth entering,” says Emir, an 11th-grade student in Bishkek. The rest, he believes, do not value scholarship and instead see students as a means to make a profit.

The number of universities in Kyrgyzstan has ballooned in recent years, from nine at independence from the Soviet Union in 1991 to 52 today, according to the Education Ministry. By comparison, Denmark and Finland – two countries with reputations for educational excellence, and with roughly the same populations as Kyrgyzstan – have eight and 14, respectively. Education experts say the relatively high number of Kyrgyz universities is not indicative of an obsession for knowledge, but that the quality of education has been diluted in the impoverished Central Asian country.

“The biggest jump in [the number of] universities occurred between the fall of the Soviet Union in 1991 and [the early] 2000s, when education started fulfilling a social role by keeping young people busy for at least four or five years,” Umankulova told EurasiaNet.org, referring to the soaring unemployment in the wake of the Soviet collapse.

But the state has little idea what is happening at these schools, says Gulnara Kurmanova, director of research and development at Norma, a sociological research outfit in Bishkek. Kurmanova says the Education Ministry has no standards with which to measure the quality of instruction at the various universities, and notes the universities themselves have little idea what courses to offer: “There is no market research to identify how the number of graduates corresponds to employers’ needs,” she said.

In 2012 President Almazbek Atambayev created a council of experts to study how to reform the sector.

"We have many universities with beautiful titles, but they do not prepare specialists," said Zamira Derbisheva, the head of the president’s council, during a roundtable hosted by the Vechernii Bishkek newspaper last May. She said the Education Ministry had hoped, in the early days of independence, that the market economy would regulate the sector. She says officials now realize that did not happen.

Part of the problem is corruption throughout the sector, education specialists complain, from the Education Ministry’s accreditation process to the classroom.

Still others complain about poor facilities. “When there are small classrooms where 20-25 students sit, the library works only 8 a.m. to 5 p.m. – the same time I’m in class – I’m forced to constantly photocopy textbooks, and this corruption, I ask: For what am I paying tuition?” said Gulnara Iskandarova, 21, who dropped out of Bishkek’s Arabaev Kyrgyz State University in 2012 and transferred to another school in the capital.

Other schools have become diploma mills, recruiting foreign students for educations that even their own embassies admit are subpar.

To reform the sector, Kyrgyzstan must privatize and modernize the accreditation process, argues Umankulova, the head of EdNet, which is positioning itself to accreditation schools to European Union standards.

At the moment, the Education Ministry’s State Attestation Commission is the only body offering accreditation. It sends representatives to schools to inspect programs’ content, the students’ workloads, and the university facilities. But some complain the process is opaque, noting that in a country with widespread palm greasing it is not feasible to allow one official to decide whether or not a school be accredited.

The current system, moreover, is “outdated” because the State Attestation Commission does not “pay attention to the actual quality of the education,” argued Umankulova, who says her techniques provide an impartial judgment on a university program’s merits.

A private system such as EdNet’s would cost universities much more ($2,500 per program, compared with under $32 currently), but would bring international standards to Kyrgyzstan, Umankulova says.

Parliament approved a new education minister, Elvira Sarieva, in December. Last month she asked parliament to give the ministry until September 2016 to reform the accreditation process.

Until then, it’s business as usual.