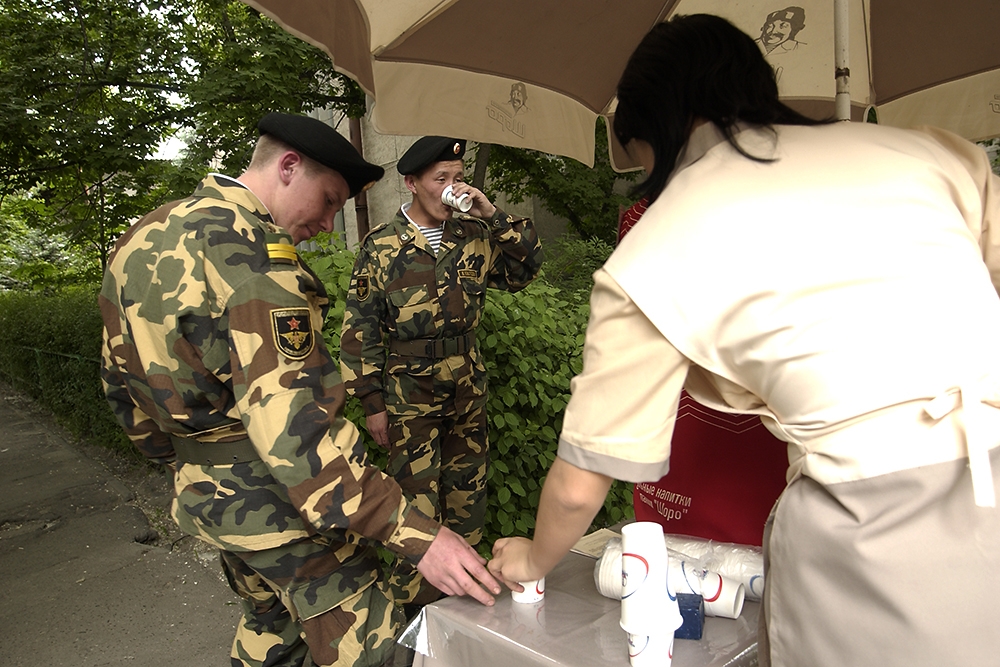 Kyrgyz soldiers, one an ethnic Russian and the other ethnic Kyrgyz, drink Maksym at a Bishkek street corner in May 2006. The popular grain-based beverage was once mostly found in rural Kyrgyz villages and consumed by ethnic Kyrgyz, but became more popular and was widely consumed at the start of the 1990s. (Photo: Dean C.K. Cox)

The row about the British miner expelled from Kyrgyzstan after likening a traditional local dish, chuchuk, to a horse’s penis has begun to subside. As the founder of news website Kloop.kg Bektour Iskender explains, however, the furor has exposed some rarely discussed tensions within Kyrgyz society.

The controversy this time around has been fiercer than anything seen before and the exchange of insults more intense, sometimes descending to outright threats.

But why has this subject proven so explosive in Kyrgyz society?

At the root of the story is a profound problem, and that is the fundamental lack of mutual understanding between Kyrgyz- and Russian-speaking sections of the population.

As it happens, the original Facebook posting itself quickly ceased to be the center of attention among Kyrgyz people. Discussion turned from the ill-judged remarks by Centerra employee Michael Mcfeat into a heated debate about Kyrgyz identity and the extent to which it is permissible to mock that identity.

As polar and stark positions have hardened, I find myself somewhere in the middle, perhaps in part because of my background.

I am a Russian-speaking resident of Kyrgyzstan with a Kyrgyz name and numerous ancestors identifying themselves as Kyrgyz. That might put me in a good position to understand both sides of the argument.

This is hardly the first time that parts of the Kyrgyz-speaking population have reacted so intemperately to a joke about themselves or their identity.

An analogous incident occurred in the spring of 2013, when the Norwegian band Ylvis used Kyrgyz swearwords in a television performance as a sly dig at their producers. The adoption of those linguistic crudities enraged Kyrgyz speakers.

It is worth pointing out here that these waves of indignation over these kinds of pranks are not engineered from above, but are perfectly spontaneous and organic.

Russian speakers often fail to get what the fuss is all about.

One of my friends wrote in a comment on my Facebook page that if jokes are made at the expense of the Kyrgyz inside Kyrgyzstan, it can hardly be considered racist, since the Kyrgyz constitute a majority in their own country.

But that is missing the point.

The fact is that to this day, many Kyrgyz have retained a lingering sense of inferiority that became ingrained in them during Soviet rule and, even earlier, under the Russian Empire.

Many ethnic Kyrgyz, despite their numerical superiority, sincerely believe that jokes about their culture constitute racism. And that is even though it may be mockery directed by a minority toward a majority — a curious post-colonial phenomenon.

Critics of this attitude might remark that Kyrgyzstan was blessed in Soviet times by the flourishing of industry, art, transportation infrastructure and so on. And they would be right in their own way.

But at the same time, during the Soviet era, little care was taken to broaden the appeal of the Kyrgyz language. From 1954 onward, Russians were not even required to study Kyrgyz at school, which means few in the Slavic population have anything more than a basic feel for the language.

The practice of “indigenization” — that is, the promotion of the local ethnic population to official posts — began to decline early on during the rule of Josef Stalin.

For these and other reasons, Kyrgyz was spoken predominantly only by ethnic Kyrgyz, and maybe also ethnic Uzbeks living in the Kyrgyz SSR, for whom learning a close Turkic language came easier. The number of people in Bishkek, the capital, that spoke Kyrgyz, regardless of their ethnic background, was negligible.

Kyrgyz culture, for all the talk of friendship among nations in the Soviet Union, made few inroads into the lives of other ethnic groups in the Kyrgyz SSR or the Soviet Union as a whole.

Sure, there have been some rare cases of Kyrgyz traditions being adopted by urbanites.

One instance was the drink Maksym. (For the uninitiated, Maksym is popular grain-based beverage typically sold on street corners). And Maksym only became popular at the start of the 1990s, before which the drink was predominantly the preserve of rural Kyrgyz families.

Now, I do not want to pass judgment on whether the policies of the Soviet Union toward the Kyrgyz and their culture were right or wrong — that is a subject for weighty research. I simply want to lay out the facts and draw some conclusions.

The point is that many ethnic Kyrgyz felt, if you will, colonized. It is beside the point whether this feeling was justified.

And this sense of grievance remains especially strong among Kyrgyz speakers, particularly those living outside Bishkek.

The following scenario is commonplace, even now: Just imagine a Kyrgyz speaker growing up in a Kyrgyz-speaking setting in a country called Kyrgyzstan who speaks Russian poorly. You come to Bishkek — the capital of your own country — only to find that you can barely get by without Russian, and that if you try to speak in Kyrgyz, many will simply not understand you.

That is not even the problem. We are not, after all, the only multilingual country in the world. This person will in all probability experience disdain at his/her failure to speak Russian, or at the fact he/she speaks Russian with a marked accent. All this can hardly fail to nourish ultranationalist ideas of the “Kyrgyzstan for the Kyrgyz” variety or an insistence that “in Kyrgyzstan everybody should speak Kyrgyz.”

The resentment felt at the dismissive attitudes reserved for Kyrgyz culture are deep and festering. This kind of thing has, in turn, led to ugly manifestations of Kyrgyz nationalism toward the Russian language.

But we are afraid to admit that this problem exists. We, Kyrgyz and Russian speakers of Kyrgyzstan, prefer to remain silent and close ourselves off into our cultural ghettoes.

And we are reminded of all this only in the event of — and I am not afraid to use the term — clashes of civilization. I never tire of repeating: this situation only occurs in those countries where there are two or more dominant languages and where nobody does anything to ensure cultures learn to understand one another.

What has all this got to do with chuchuk you may ask? The fact is that this episode has become a litmus test for the very situation I am describing.

Many Russian speakers living in Kyrgyzstan, as well as foreigners, fail to understand the degree to which the Kyrgyz-speaking population is offended by jokes directed at their culture and traditions.

Many Russian speakers fail to understand that even after a quarter of a century since the fall of the Soviet Union, Kyrgyz speakers feel their language and culture are not being accorded proper respect, especially in the capital city.

By the same token, many Kyrgyz speakers fail to understand that what so irritated and exasperated Russian speakers and foreigners was the fact that the police felt the need to get involved over an ignorant throwaway remark about food. And that the dubious methods of the police — including the “sudden discovery” that this British citizen’s papers were not in order, just so they could deport him — foster cynicism and mistrust.

Many Kyrgyz speakers do not understand that what worries Russian speakers is the arbitrary and selective decisions of the authorities, who are willing to react to insults addressed at Kyrgyz culture, while at the same time ignoring intolerance toward others.

Many Kyrgyz speakers do not understand that Russian speakers also often feel they are being disrespected.

The entire situation is quite perverse.

As long as we leave this abyss unaddressed, every recurring incident, as petty as it might be, will continue to broaden the rift.

So is it not time that the two communities begin listening to one another?