The rapid ascendancy of Japarov, who was sprung from prison in the wake of a violent bout of rioting this week, has hinged entirely on a strategy of intimidation executed by hordes of aggressive supporters bussed into the capital. 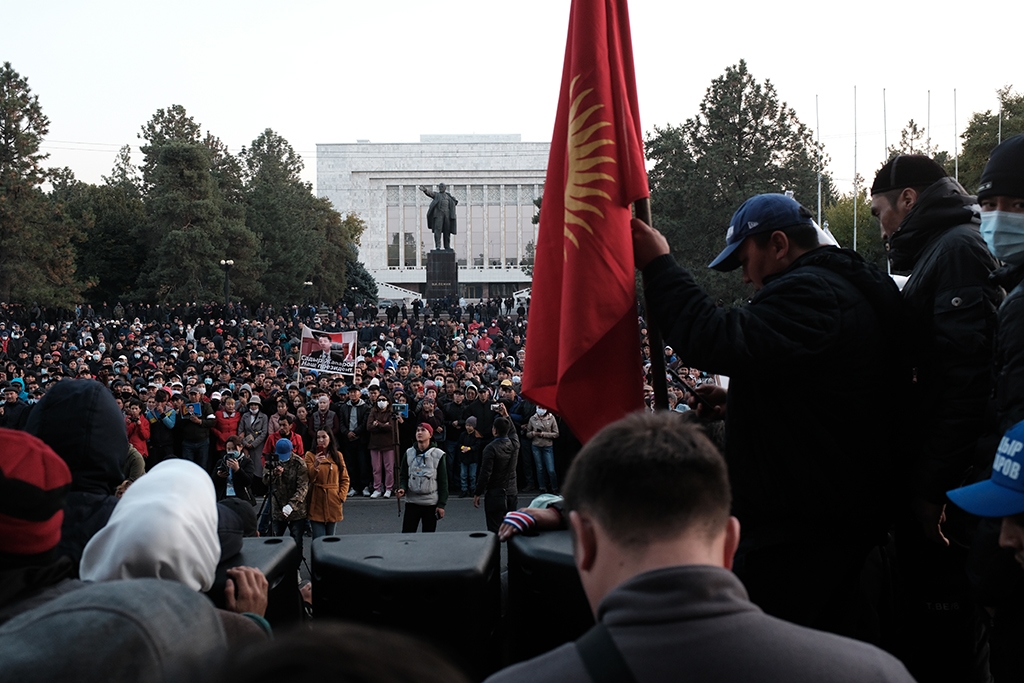 Supporters of Sadyr Japarov outside the government headquarters on October 10, the day he was appointed prime minister. (photo: Danil Usmanov)

Kyrgyzstan’s parliament has voted in an emergency session attended by fewer than half the legislature's members to appoint Sadyr Japarov, an avowed nationalist who was sentenced in 2017 to more than 10 years in prison on kidnapping-related charges, as the country’s prime minister.

The vote on October 10 brings a close to almost a week of turbulence that has seen the government in disarray, countless scenes of politically tinged violence on the streets and multiple businesses seized by mobs.

The rapid ascendancy of Japarov, who was sprung from prison in the wake of a violent bout of rioting on the night of October 5, has hinged entirely on a strategy of intimidation executed by hordes of aggressive supporters bussed into the capital, Bishkek.

“I want to express my deep gratitude for you nominating and electing me. There is no more time left for conflict. There is no room for wasting time,” he said, addressing the few dozen lawmakers present. “On one side, there is the political situation. On the other, there are the pandemic, the economy, the lack of funds, social welfare. From now on, I will take responsibility for all of this.”

Although the number of MPs present during the parliament vote was only 51, lower than the quorum of 60, the requisite threshold was met by some deputies having their vote cast by proxy. Granting an MP permission to vote on another’s behalf, however, requires the presentation of a relevant power of attorney, and no evidence is forthcoming that any such documents have been produced.

Japarov’s anointment as head of the government is particularly notable in light of the previous day’s events. On October 9, a coalition of political leaders opposed to his candidacy assembled thousands of their supporters and unaffiliated anti-organized crime demonstrators for a rally on Ala-Too Square in Bishkek. Around half an hour after the gathering got underway, it was attacked by Japarov supporters throwing fists, stones and bottles.

As one leading figure in that rally, former President Almazbek Atambayev, was being driven away from the unrest, a man fired several rounds from a pistol into his car.

But on October 10, hours before Japarov got the prime minister’s job, it was Atambayev who was arrested by government forces at his country residence. As it happens, he was among several former top politicians who were released from custody during the unrest at the start of the week, but he was detained in this instance on charges of purportedly instigating the unrest of the day before.

Furthermore, Japarov claimed that the shooter who targeted Atambayev’s car was actually the ex-president’s own bodyguard.

“This was all done according to a script,” he said.

The arrest of Atambayev was happening at almost exactly the same time as a massive number of soldiers and police lined up for a parade in the center of Bishkek in what had seemed initially like a show of force against Japarov supporters occupying a nearby square. As later became evident, however, the purpose of that parade was not to crush Japarov’s reign of terror in the city, but instead to give it an implicit endorsement. 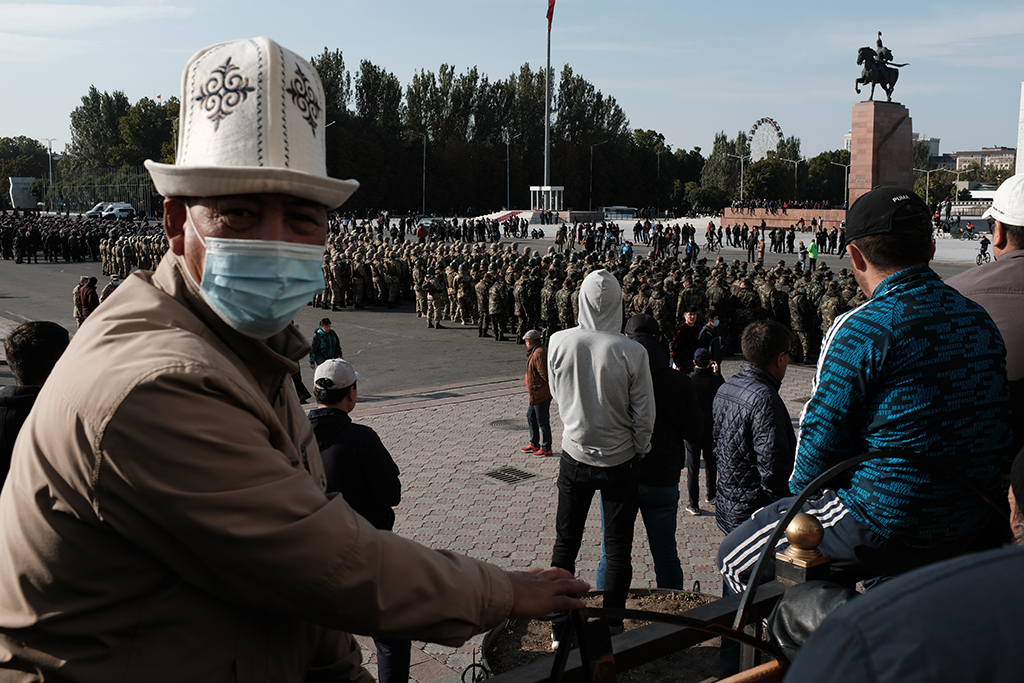 Japarov revealed after being nominated prime minister that he had met with President Sooronbai Jeenbekov, who has been in hiding ever since this crisis began, to discuss the steps to come.

“We agreed that [after I am nominated prime minister], within 2-3 days, he will sign a letter of resignation,” he said.

This opens up the possibility that Japarov may end up serving as acting prime minister and president simultaneously as the title of head of state should, in the event of the incumbent being unable to fulfill the task, go to the speaker of parliament. Since parliament on October 10 approved only the naming of a vice-speaker of parliament, the next person in line eligible to take up the presidency is the prime minister.

Japarov’s path to this moment has been exotic and convoluted.

Before 2005, he was mostly involved in the fuel business and had never occupied any positions in government. He got into politics after the overthrow of President Askar Akayev in March that year and later joined the Ak-Zhol party of President Kurmanbek Bakiyev, who would himself be overthrown in 2010.

In 2008, Japarov headed up the national agency for the prevention of corruption – an unenviable resumé entry in light of the rampant embezzlement executed at the hands of the Bakiyev ruling family.

He began displaying his nationalist stripes in 2010, when he became a leading figure in the Ata-Jurt party.

A couple of years later, he got involved in a campaign to demand the nationalization of Kumtor, the country’s largest goldmine, then and still now operated by a Canadian company. That led to the most notorious incident in Japarov’s biography. In 2013, he whipped up unrest in the town of Karakol that culminated with his associates kidnapping Issyk-Kul governor Emil Kaptagayev and subsequently using him as a hostage during a standoff with the authorities.

After that episode, he fled the country but returned in 2017, whereupon he was arrested, tried and convicted.

Supporters demanding his release have mounted numerous rowdy rallies since that time. One especially unruly one took place in March, when one section of a 2,000-strong crowd advanced upon the gates of the White House only to be met by lines of riot police and to be sprayed with water cannons. Some in the crowd hurled rocks at the police.

Whoever instigated the unrest that derailed the peaceful conduct of a rally that was held on October 5 in protest at vote-rigging in the weekend’s parliamentary elections – likewise through provoking a police response by assaulting the White House gates – was more successful on this occasion.

Japarov has had previous designs on high office. In July 2017, several months after he was jailed, he filed the papers to run for president. His application was denied, however, as he had a criminal record.

Curiously enough, he should be disqualified from filling the prime ministerial post by those same criteria, if not for some quick work in the Supreme Court. The court stated on October 9 that criminal charges against Japarov were being reviewed, something that falls short of an absolution, but which means the case will have to be litigated anew.