A court has frozen the accounts of the targeted media outlets. 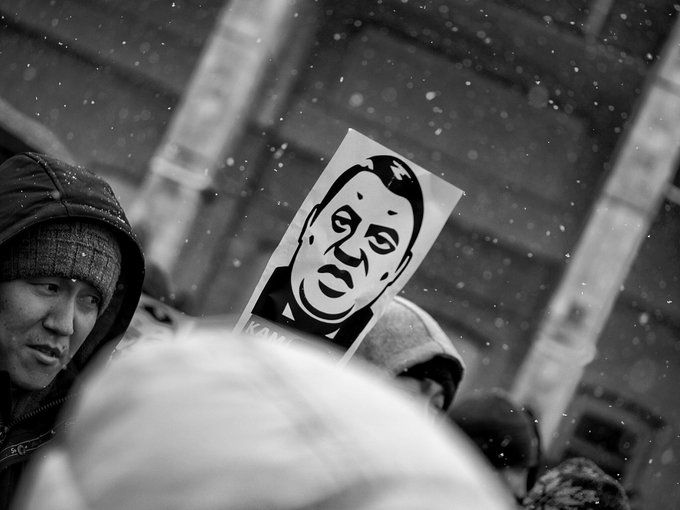 A caricature of Matraimov held at an anticorruption rally in Bishkek in November. (Photo: @umut2020kg)

A court in Kyrgyzstan has ruled to freeze the bank accounts of media outlets facing lawsuits from a former top customs official alleged to have amassed vast riches through corrupt practices.

The suit is a response to the outlets’ publication of an in-depth journalistic investigation that sought to document what they described as a vast smuggling and money-laundering operation. Azattyk and Kloop last month produced a report, in conjunction with the Organized Crime and Corruption Reporting Project, or OCCRP, shedding new light on the ways in which customs service officials have allegedly turned a blind eye as multibillion-dollar smuggling operations have defrauded the Kyrgyz state of vast amounts of revenue.

That report triggered an upswell of indignation that culminated in a demonstration in the center of the capital, Bishkek. Despite grumblings of public discontent, however, the authorities have shown little interest in pursuing the accusations leveled at Matraimov, whose family is said to have accumulated riches not in keeping with the relatively modest government posts he and his relatives have held for most of his career.

One of Matraimov’s brothers, Ruslan, runs a charitable foundation that last month’s report alleged was used to spirit millions of dollars out of the country. The Ismail-Ata Foundation is also involved in the suit. Another brother, the member of parliament Iskender Matraimov, is likewise participating in the suit.

Despite years of whispering at his expense, Matraimov enjoys strong support from Kyrgyzstan’s political establishment. His detractors maintain he has used his considerable financial heft to patronize an overwhelming cross-section of the nation’s leading politicians.

Kloop founder Bektour Iskender told Eurasianet that his outlet had been fully anticipating the lawsuit, which he said would not affect the website’s operations.

“Many in Kyrgyzstan were waiting for the moment Rayimbek Matraimov would go to court, and here they have given us this wonderful New Year’s present,” Iskender said. “At least this case will enable us to demand from law enforcement that they carry out an investigation into all the things we have brought up in our reports.”

Matraimov has in recent weeks been summoned for questioning on two occasions by the State Committee for National Security, or GKNB, following the gangland killing in Istanbul of Chinese-born businessman Aierken Saimaiti on November 10. Saimaiti had acted as a key source in the OCCRP/Azattyk/Kloop investigation. He alleged in testimonies to reporters that he was a lynchpin in a years-long scheme effected at the behest of Matraimov and associates to transport $700 million of illicitly earned gains across international borders. There is no indication that Kyrgyz authorities have any intention to initiate an investigation into Matraimov.

Matraimov has staunchly denied he is involved either with Saimaiti or the laundering of money.

“I have no connection to any $700 million,” he said on December 6, after his second session at the GKNB. “I do not know Saimaiti and have never once in my life laid eyes on him.”

At the same time, Matraimov warned that he was preparing to file suit not just against reporters but also the activist Shirin Aitmatova, who has led the charge in demanding a probe into the former customs official’s history.

Aitmatova said she hoped the lawsuits would help the cause of anti-corruption activists.

“When he went to be questioned by the GKNB, he arrived in a car that costs at least $110,000. For a customs official to earn that much money, they would need to work at least 15-20 years,” she said in an interview with Azattyk.