Ruziyev has been active highlighting police abuse for decades. 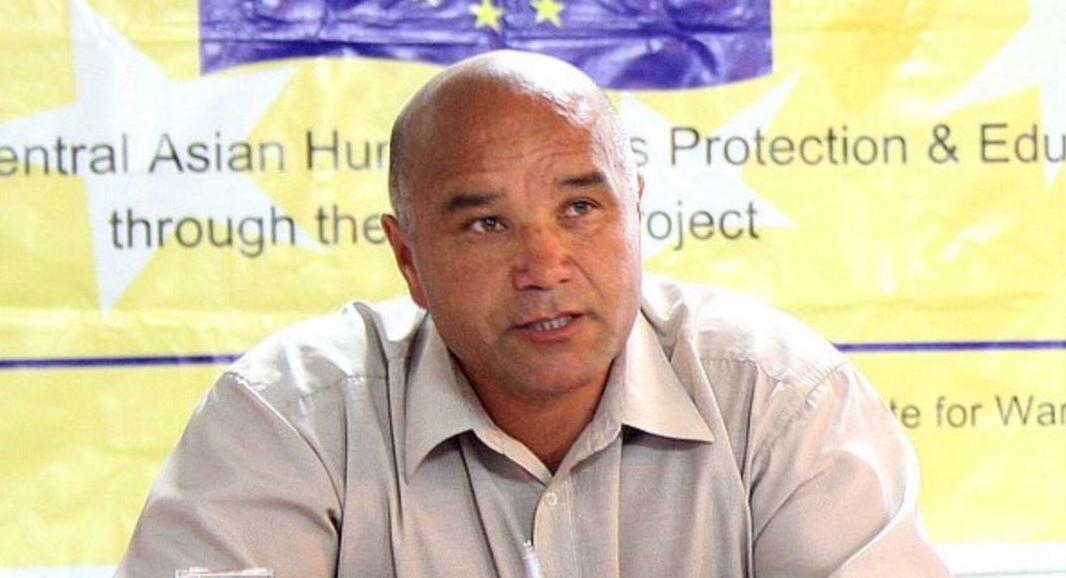 Security services agents were waiting for veteran rights activist Kamil Ruziyev as he emerged from a courthouse in Karakol, a city in Kyrgyzstan’s Issyk-Kul region, on the evening of May 29.

Ruziyev, 56, had just filed his lawsuit against the State Committee for National Security, or GKNB, on the grounds that they had refused to address his complaints about allegedly being threatened at gunpoint by a now-dismissed investigator. In order for the suit to be processed, Ruziyev was required to hand over his passport.

That was all the excuse the lurking GKNB operatives needed. The moment Ruziyev had taken a few steps outside the courthouse, they picked him up for being in public without an ID. It was only after Ruziyev was placed in custody that he was able to definitively provide evidence of his identity. At that point, the GKNB changed tack, charging him with fraud and forging documents. Or at least that’s what they told reporters they were doing.

When Ruziyev turned up in court on May 31, the story took another turn. Now the charges of fraud had disappeared from the docket. He was, the judge said, only being summoned as a witness in an ongoing criminal case.

This provoked howls out outrage from his peers and his legal representative, since there are no legal grounds for holding witnesses in custody.

“In the court documents, there was no talk about suspicion of fraud, only the forgery of documents. The GKNB probably mistakenly sent out the information. We will file a complaint in the appeal to state that the detention was unlawful,” Ruziyev’s lawyer, Asantur Moldogaziyev, told Eurasianet.

When required to do so, an investigator in court offered yet another explanation. The authorities were required to hold Ruziyev, he said, because he had ignored summons to assist in an ongoing investigation. Moldogaziyev said that Ruziyev had told the investigator that he would be unable to abide by the summons because he was tied up with the lawsuit hearing. Ruziyev has been routinely called in for questioning by law enforcement authorities, invariably always at inconvenient times.

The judge ruled to place Ruziyev under house arrest, thereby releasing him from the detention facility, but declined the lawyer’s request for the activist to be allowed free on condition he not leave the locality.

Ruziyev is in little doubt this episode is the result of his work. For the best part of two decades, he has been a thorn in the side of law enforcement authorities, having documented multiple cases of abuse.

Tolekan Ismailova, head of the Bir Duino rights group, urged people to hold rallies for Ruziyev in solidarity, as well as to contact lawmakers and the ombudsman.

“Colleagues, friends, this outrageous and illegal detention of the rights advocate Kamil Ruziyev for his activism is a clear breach of authority by GKNB operatives,” Ismailova wrote.

Assol Moldokmatova, a popular TV presenter, took up the gauntlet and responded to that appeal by contacting the ombudsman, Tokon Mamytov, and a number of parliamentarians, all of whom promised to investigate the situation.

“Kyrgyzstanis! I appeal to you to share this information! We are united and we are strong. Let us not let Kamil Ruziyev down! He defended so many Kyrgyzstanis over the years, how can we allow these reprisals against Kamil,” Moldokmatova wrote.

The aware-raising campaign then spread on social media with many changing their profile pictures to an image of Ruziyev accompanied by the hashtag #freeKamilRuziev.

This case bears some ominous echoes of the long-running saga involving Azimjan Askarov, an ethnic Uzbek from the south of the country who has been languishing in prison for the last decade on flakily substantiated murder charges.

Like Ruziyev, Askarov angered powerful enemies through activism aimed at exposing, in often embarrassing manner, the corruption and arbitrary excesses of the police.

In one case in 2006, two residents in the town of Bazar-Korgon, who had been tortured into confessing to murder, were cleared after Askarov managed on the first day of the trial to produce the alleged victim, Mairam Zahirov, who was alive and well.

A recently created nongovernmental group called Resistance to Political Repressions Committee noted that Ruziyev is only one of two rights activists to be targeted by what they termed repressive and suspicious behavior from the authorities. On May 28, the GKNB conducted a search of the offices of Kalicha Omuraliyeva. Before she became director of the municipality department overseeing the parks of Bishkek, Omuraliyeva had spent years campaigning to promote the preservation of green spaces in the city. It was this very activism that earned her the job, in fact. She is now being investigated on charges of bribery.

The actions against “Omuraliyeva and the more recent detention of Karakol activist Kamul Ruziyev are a veritable assault on the most active representatives of civil society carried out with the intent to discredit those who work to reveal corruption in law enforcement and municipal bodies,” the committee said in a statement.

Ruziyev’s son, Azat, said he believes his father’s arrest is an act of vengeance perpetrated by former GKNB investigator Bakhtiyar Tokushev, who was dismissed from his job after making repeated violent threats. During one alleged episode, Tokushev pointed a gun at Ruziyev’s head.

Azat Ruziyev said their family will now take the case up with a wide range of international organizations, including advocacy groups like Human Rights Watch, as well as official entities like the United Nations and the Organization for Security and Cooperation in Europe.