Kyrgyzstan: Fresh Dawn Looming for Ties with US 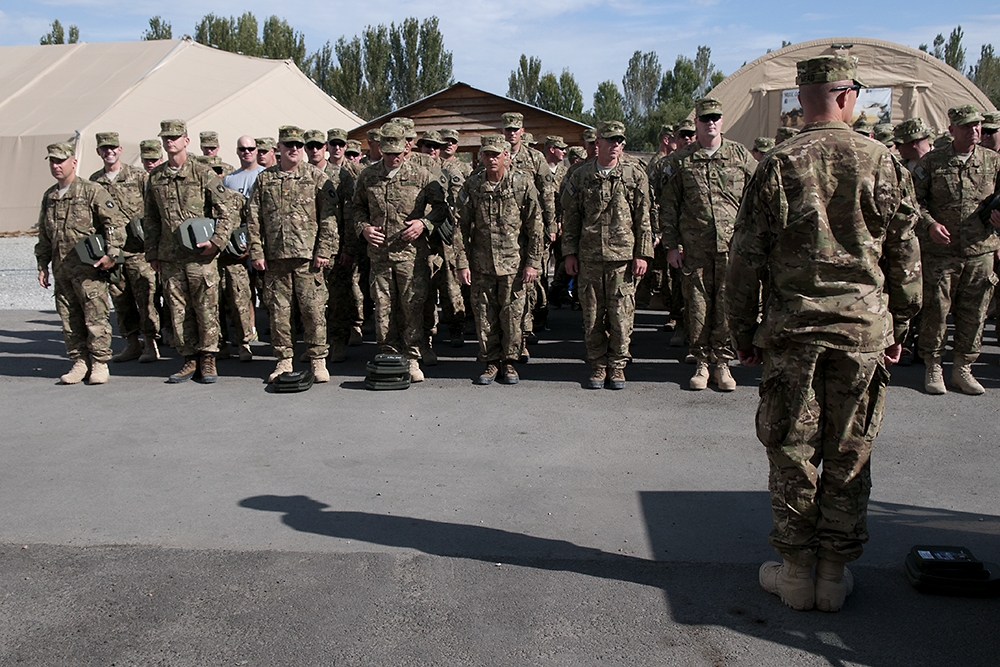 US soldiers line up in formation at the former Manas airbase near Bishkek in 2010 before deploying to Afghanistan. The base was opened in December 2001, and on June 3, 2014, American troops vacated it, handing it back to the Kyrgyz military. (Photo: Dean C.K. Cox)

Speculation is mounting that Kyrgyzstan wants to repair relations with the United States after a dispute over human rights torpedoed ties last summer.

Kyrgyzstan’s dealings with the United States have historically oscillated from warm to chilly and back again. In 2001, Bishkek became a lynchpin of the NATO military campaign in Afghanistan by agreeing to host a strategically important US airbase, but lately attitudes toward Washington have been in a frosty phase, accompanied by an intensifying turn to Russia.

Matters came to a head last July, when Bishkek repealed a cornerstone 1993 cooperation treaty between the two countries in reaction to the US State Department bestowing a human rights award on a jailed ethnic Uzbek activist.

Among other things, the repealed treaty allowed for a tariff waiver on goods imported into Kyrgyzstan as part of US aid programs. The prospect of beneficiary nation slapping taxes on assistance caused consternation among American policymakers and donors, prompting a rethinking of aid strategy.

Officially, both sides have been studiously noncommittal about prospects for a rapprochement, but there is acknowledgement that dialogue has resumed.

“The United States and the Kyrgyz Government have an ongoing dialogue on issues of shared interest. We appreciate their willingness to engage with us to strengthen our partnership,” the US Embassy in Bishkek said in a statement. “We are committed to finding ways forward that meet the interests of both our nations on the basis of trust, equality, and mutual respect.”

The initiative appears to have come from Kyrgyzstan, which finds itself in need of friends who can help the Central Asian country ride out a perfect storm of negative economic developments.

“Our main strategic partners — Kazakhstan and Russia — are going through a time of crisis, so we need to seal new agreements and find new partners,” Abduvahab Nurbayev, deputy head of the Kyrgyz parliament’s International Affairs Committee, told EurasiaNet.org. “Without a doubt, we should adopt a multi-vector foreign policy.”

Russia’s economy is in a tailspin because of a combination of depressed global oil prices, a depreciating currency and Western sanctions. As a result, remittances from Kyrgyz migrant laborers have plummeted. They sent home $1.55 billion in remittances from January through November in 2015, marking a 26 percent decrease from the same period the previous year, according to government figures released earlier in February. Remittances from Kyrgyz migrant laborers in other countries have also gone down.

Kazakhstan has also suffered from low oil prices and the knock-on effect of the Russian downturn.

Compounding the economic challenges for Bishkek, the country’s accession to the Moscow-dominated Eurasian Economic Union has thrown up a tariff barrier for incoming Chinese goods, whose re-export once served as a buoyant source of income for Kyrgyz traders.

Experts agree that for simple diplomatic reasons, replacing the 1993 treaty is an inescapable necessity. “An agreement is needed because, in my view, you need a normative basis for bilateral relations. Those bilateral relations will remain in place, although perhaps not at the levels that there were before,” said Medet Tiulegenov, a political scientist at the American University of Central Asia.

The evolution of US interests in the region is expected to have a determining factor on negotiations. “Given the [US government’s] modest ambitions, reluctance to invest, and return to viewing Central Asia through the political reform, rather than geopolitics lens, Bishkek will need to do the heavy lifting if the objective is to increase substantive bilateral cooperation,” said Eric McGlinchey, an associate professor at George Mason University’s School of Policy, Government, and International Affairs.

While Russia and China may be in varying stages of, likely temporary, economic retreat, both countries should retain a predominant role in Kyrgyzstan and the surrounding neighborhood. “We should be careful not to overstate Washington’s influence in Kyrgyzstan or in Central Asia broadly. The United States is a distant third to Russia and China as far as resources external powers are willing to bring to the Central Asian negotiating table,” McGlinchey said.

Nurbayev said that he would favor a predominant focus on education and culture under a new arrangement, but allowed for collaboration in support for democracy. “We are a democratic Central Asian nation. Our parliamentary system is evolving, we have freedom of speech,” he said. “The United States should be interested in cooperating with us in these areas.”

But Nurbayev also argued that the changing global situation since 1993, when the scrapped treaty was signed, requires that security cooperation be a core component of any pact. “We need to come up with an agreement that addresses more contemporary issues, such as the fight against terrorism,” he said.

Russia and human rights remain the two elephants in the room.

The United States is unlikely to back away from its position on the issue that led to the sharp deterioration in relations last year.

In September 2010, ethnic Uzbek activist Azimjan Askarov was sentenced to life imprisonment for what Kyrgyz authorities say was his role in inciting the mob killing of a police officer amid ethnic unrest in southern Kyrgyzstan in June of that year. The US and other Western governments contend that Askarov did not receive a fair trial, and have urged the Kyrgyz government to review the case.

Neither side looks likely to budge on the Askarov matter.

“To the extent that the [US government] is interested in Kyrgyzstan, it is interested in promoting political and economic reform. Human rights is central to this agenda,” McGlinchey said. “The State Department has framed — I think correctly — Askarov’s imprisonment as a violation of human rights. To abandon Askarov now would be inconsistent with Washington’s Kyrgyzstan strategy.”

Nurbayev, meanwhile, argues US officials do not fully consider that public emotions stirred by the 2010 rioting remain raw. “To be honest, the events of 2010 still have not been fully resolved. [The State Department award to Askarov] was a very hurtful thing for us, so the government was obliged to act the way that it did,” he said.

In a recent paper for the Carnegie Endowment for International Peace, Richard Sokolsky and Paul Stronski write that while the United States should continue to “advance American ideals [and] promote good governance” in Central Asia, it is also necessary to explore where Washington’s interests overlap with those of Russia and China.

It is far from certain though that Moscow in particular is especially eager to have the United States play any role at all in the region.

The remarks of pro-Kremlin analysts neatly capture the abiding paranoia that the US presence in Central Asia evokes among many Russian policymakers.

“It was the Bishkek office of USAID that received the most generous allocations in the region. As such, the money worked. Just remember the myriad Western nongovernmental organizations and educational and publishing projects, as well as their part in the coups that have shaken the country,” Yulia Yakusheva, an analyst at a Moscow State University-sponsored institute focusing on the post-Soviet space, said at a roundtable last year, following Kyrgyzstan’s revocation of the 1993 treaty.