Kyrgyzstan: Garment Industry Is a Bright Spot in Gray Area 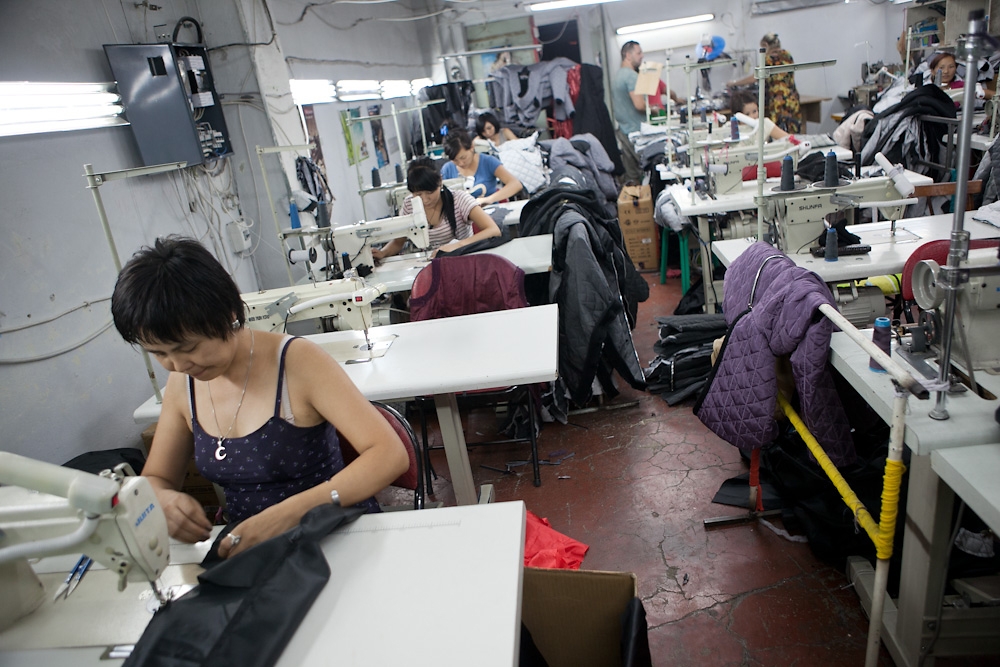 Manufacturing of textiles and garments in Kyrgyzstan grew by 49.5 percent in 2011 over the previous year. (Photo: David Trilling)

On a main thoroughfare in central Bishkek stands a rare type of building in Kyrgyzstan these days: a busy factory. Women hunched over long tables can be seen from the street working late into the evening in boxy rooms under the greenish glow of florescent lights.

During the Soviet era, the factory produced men’s suits for sale in communist Eastern Europe. Today, the five-story building is home to some 80 independent workshops making clothes, mostly for Russian women. No one knows for sure, but various studies estimate that Kyrgyzstan’s apparel industry employs between 150,000 and 300,000 workers – about 7 to 14 percent of the country’s working population. It’s quickly growing, too. But is it sustainable? And will shifting customs alliances spell its demise?

Vladimir Foton rents two workspaces and employs 15 women in the building on Jibek Jolu Avenue, still referred to as the VLKSM Factory (named for the Komsomol, or the Communist youth organization). Speaking over the humming sewing machines, he explains that, with the onset of autumn, his operation switches over to making quilted polyester coats.

“In summer we make dresses, but now that winter is coming, we’re making coats,” says the 39-year-old, who moonlights as a fitness trainer. Foton estimates that 15 percent of his products are pre-ordered and 85 percent made on spec. Relatives in Moscow do most of the sales: “We talk by Skype and they tell me what I should make.”

According to the National Statistics Committee, manufacturing of textiles and garments in Kyrgyzstan grew by 49.5 percent in 2011 over the previous year. In 2010, the industry grew by 19.1 percent, political tumult in Kyrgyzstan notwithstanding. The industry is worth, officially, nearly $160 million, or 2.7 percent of GDP.

But the real value is likely double that. A September 2011 study commissioned by the US Agency for International Development estimated official statistics undervalue the industry by 50 percent.

Foton and others attribute the industry’s success to a combination of Kyrgyzstan’s geographic position, cheap labor, and international trade agreements. Foton, like hundreds of other small workshop owners in northern Kyrgyzstan’s Chui Valley, imports inexpensive textiles from China and exports finished garments to markets across the former Soviet Union. A vast majority of the exports, some studies say as high as 95 percent, go to Russia.

Prior to the Soviet collapse in 1991, the local textile industry relied primarily on cotton grown in Central Asia, especially Uzbekistan. But today operations depend mostly on synthetic Chinese fabrics. “Uzbek materials are more expensive because they are made out of natural cotton. From China, it’s not the best quality, but that’s why it’s cheaper,” Foton says. He purchases in bulk at a number of bazaars around Bishkek.

Although the workshops are out in the open, many seem to exist in a gray economic area. In the dark corridors of Fabrika VLKSM, workers are too preoccupied with what they’re doing to speak to a journalist. Men react angrily to the camera. Women, who make up 70 to 85 percent of workers in the industry, flee from it.

One manufacturer stops to explain that they are hiding from government officials. “I don’t know anyone here who doesn’t pay kickbacks. If I paid all the taxes I owe, it would be better for me not to work at all,” he said, explaining that he bribes inspectors to leave him alone and pays only 20 to 30 percent of his taxes.

A recent study published by Harvard Business School describes Kyrgyzstan’s complicated tax regime as a “barrier to formalization” for the garment industry. The May report found that though existing tax tiers favor small companies, as soon as companies grow above 30 employees, they “immediately face higher payments and a more cumbersome payment procedure.” That discourages growth.

“If the government would do it the smart way, they would have decreased the taxes and this would make the tax inflow bigger from textiles,” continued the manufacturer in the corridor. “But the government doesn’t care. All they do is increase taxes and everyone has to make illegal extra deals with officials. All the extra money goes into someone’s pocket, not the government’s.”

The Harvard study estimates 60 to 80 percent of firms operate at least partially off the books. “The number of public inspections by fire departments, sanitations, labor, and many other agencies create a headache at best, and encourage corrupt activities at worst,” it says.

This affects quality, says the International Labor Organization (ILO). Because the tax system and corruption discourage expansion, manufacturers are afraid to hire workers full-time. Without consistent work, employees often pick up a few skills and head to Russia as labor migrants. Skilled workers do not stay, the ILO wrote in a report published this year.

At least one other factor scares investors and hurts development: the Russia-led Customs Union. Kyrgyzstan is seeking to join the new trade group, which also includes Belarus and Kazakhstan, as much out of political considerations as economic factors. Should it join, manufacturers could face new barriers to importing raw materials from China. Should it not join, the Customs Union could squeeze out Kyrgyz exports.

Further confusing the situation, Russia joined the World Trade Organization (WTO) in August. Some economists say this development will hurt the competitive edge that Kyrgyzstan, also a member, had previously enjoyed.

“The concern is that Russia, under its WTO commitments, will reduce tariff barriers against other exporters of garments – namely China – and thus Kyrgyz producers would lose some of the preferential margin they are currently enjoying in the Russian market,” says the ILO report.

Several small-scale entrepreneurs say they are against joining the Customs Union. “If we join, imported materials will become more expensive. Prices [for raw materials and, eventually, labor] will rise and become equal to what they cost in Russia,” said Aziz, who runs a workshop outside of Bishkek and, fearing attention from the tax authorities, only provided his first name.

Certainly Kyrgyzstan’s garment industry has promise, but it must first navigate some bumps in the road. Aziz, who has specialized in women’s slacks for 10 years, says the demand for Kyrgyz-made garments is constantly growing. But the week he met EurasiaNet.org, he’d put his 15 workers on furlough. While waiting for his next order, he earns money driving his 12-year-old Toyota sedan as a taxicab.