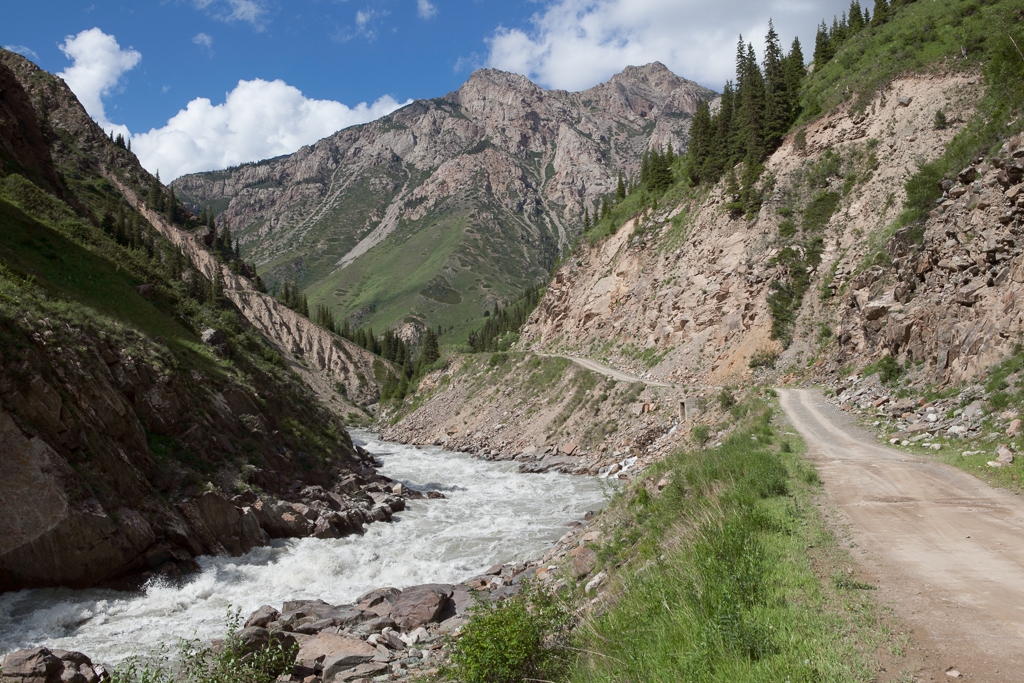 The headwaters of the Syr-Darya in Kyrgyzstan (Eurasianet file photo)

The head of Kyrgyzstan’s government has admitted in parliament that low river levels this summer are posing a grave danger to the nation’s food security.

Ulukbek Maripov told lawmakers on June 17 that the government is coordinating with hard-hit areas, but that staunching the flow of rivers to neighboring countries also being ravaged by drought was not an option.

“Many have expressed their discontent about how there is no water, but that we are at the same time letting it go to other countries. [But] we must be fair,” he said.

Kyrgyz farmers, particularly in the northern Chui region, have in recent weeks been warning that they are on the verge of losing a season’s worth of crops.

RFE/RL’s Kyrgyz service reported that farmers from several Chui region villages held a picket outside government headquarters on June 14 complaining about what they said was the unfair distribution of water.

Maripov embarked on a tour of the Chui region on the same day and admitted the situation had reached a critical stage.

“The problem has arisen because of a reduction in flow in mountain tributaries to the Chu River. As a result, there is a deficit of irrigation water in the Western Big Chui Canal,” he said, referring to infrastructure completed in the mid-1940s.

The gravity of the situation was illustrated in video footage filmed by a farmer and posted online. The clip shows rows of maize plants standing in a bone-dry field.

“They have completely cut off water to the Frunze farm,” says the man filming the scene, which was posted on June 14. “I have no figures about how much water is being sent where, but they say the situation is already critical. If the first watering does not happen soon, the corn will be completely scorched.”

Journalists taken this week on a government-organized press tour of the rivers and reservoirs used to irrigate the fields of northern Kyrgyzstan were told that cold weather in the mountains was at fault.

“It is very cold up there in the mountains. At night, temperatures stay at a low level. And so the glaciers are not melting. What is more, there is no rain," Maksat Bozov, the director of the water management department in Alamudun, one of Chui’s eight sub-districts, told reporters.

The flow of the Kegeti River, a tributary of the Chu, has decreased six times below the norm, and the Alamedin Reservoir is filling up three times slower than it should, officials said, speaking about two sites included in the press tour.

A farmer who spoke to Russian government-owned news website Sputnik said there have been disagreements among farmers because of the drought.

“Sometimes we cannot even share with relatives. Everybody is trying to water their own plot. I am sixth in line, so I am supposed to get water in 10 days. But if there are any disputes, it could be even later. If irrigation doesn’t happen, there will be no crop – a year’s work will be lost,” the farmer, Almambet Usupov, told Sputnik.

The knock-on effect on prices for produce is already being felt. Finance news website Economist.kg reported on June 17 that prices for hay used to feed livestock have more than doubled in the Chui region. Less steep increases have been recorded all over the country. The impact of such inflation will be felt down the line in prices for meat and dairy products.

The Anti-Monopoly Agency has identified the bulk purchase of hay by buyers in Kazakhstan and Uzbekistan, which are also enduring droughts, as a chief driver of that price rise.

While addressing lawmakers, Maripov said the cabinet was considering a ban on hay exports.

“And secondly, we must consider the matter of relaxing taxes for the import of hay,” he said.

No water, no power

What complicates matters even further is that Central Asia’s network of rivers is vital not only for watering crops, but also for generating electricity. And things are looking bad there too – not least since power and water need to be shared between countries.

“As of May, we have sent 370 million kilowatt hours of electricity to Kyrgyzstan. Uzbekistan has got 250 million kilowatt hours. In return, 330 million cubic meters of water will be discharged into the river from the Toktogul Reservoir [in Kyrgyzstan] during the growing season,” Kozhaniyazov said on May 24 at a meeting with local officials in Kazakhstan’s southern Kyzylorda region.

Various media outlets have cited Kozhaniyazov as presenting different figures for commitments on both power and water deliveries, making the overall picture murkier yet.

Similar quid pro quo arrangements have been reached with Tajikistan, which Kozhaniyazov said could expect to be supplied with financially commensurate amounts of machinery and fuel for releasing an additional 300-400 million cubic meters of water into the lower reaches of the Syr Darya.

The Toktogul Reservoir, however, has been experiencing difficult times. Experts were warning in March that water levels at the reservoir, which also serves as Kyrgyzstan’s primary generator of electricity, had dropped to levels unseen for more than a decade. That impasse precipitated a bilateral deal with Uzbekistan on the mutual delivery of up to 750 million kilowatt hours of electricity at nominal rates.

This arrangement was designed to enable Kyrgyzstan to refill Toktogul. Kazakhstan has its eyes on that same water, though.

Toktogul is looking a little healthier than it was in March, when it was reported to be holding around 8.8 billion cubic meters of water.