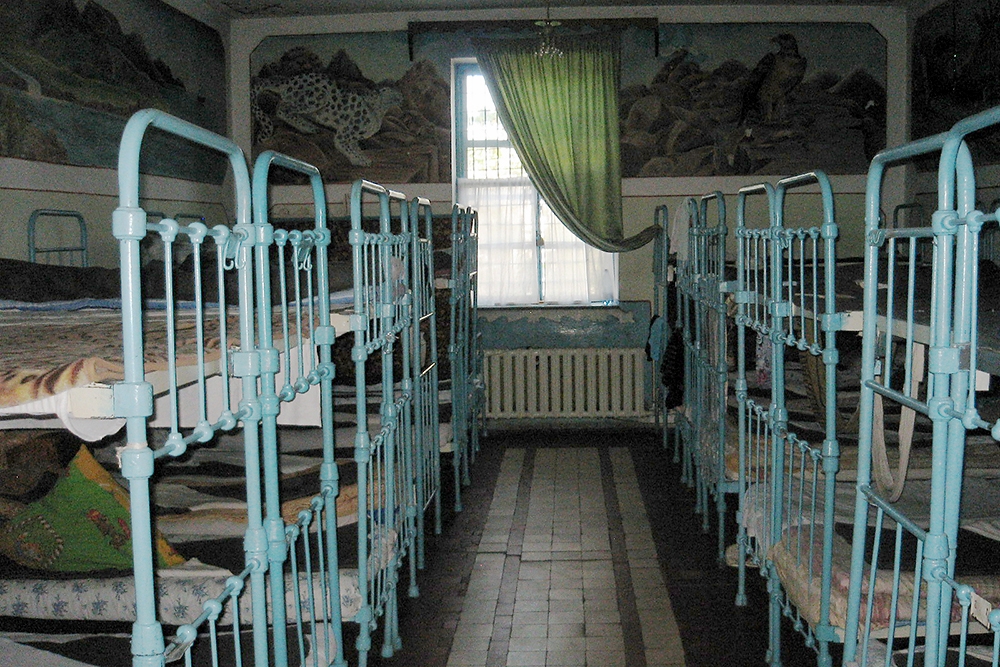 A recent report by Kyrgyzstan’s National Torture Prevention Center claims there had been 199 alleged instances of torture in 2015 in either prisons or other security centers similar to this Pre-Trial Detention Facility No. 1 in Bishkek, seen in 2010. (UNODC/Kuat Rakhimberdin)

When the police wanted to extract a confession out of K.D., they put a plastic bag over his head and injected in a pungent vinegar solution that made his lungs burn.

Such tales of abuse in police stations and penal facilities are commonplace in Kyrgyzstan. But what is unusual about this story is that it is one of many featured in an annual report authored by a government body. The 90-page document, published earlier in April by Kyrgyzstan’s National Torture Prevention Center, draws on interviews with 1,283 people who have spent time in either pre-trial detention facilities or prison.

The center was set up in 2012 following the country’s adherence to the Optional Protocol to the Convention against Torture and other Cruel, Inhuman or Degrading Treatment or Punishment. The robust nature of its reports strongly suggests it has managed to preserve a streak of independence, despite being a state entity.

The most recent report revealed that there had been 199 alleged instances of torture in 2015, but said that the real number of such cases was impossible to ascertain since so many acts of abuse go unreported. Of those detainees who said they had been tortured, 85 percent said that law enforcement officers resorted to the maltreatment as a way of extorting confessions.

“K.D. was tortured at the Pervomaisky station in Bishkek by police officers trying to secure a confession,” according to one account in the report. “They put a plastic bag on his head and using a syringe they injected a vinegar mixture inside the bag. They closed the bag tightly so that the victim breathed vinegar fumes.”

In one instance, another witness, Samat Temirchiyev, claimed to have jumped out of the third floor of a police station in the town of Sokuluk out of fear of being beaten. “He was admitted to the intensive care unit at the local hospital. When asked why he had resorted to such extreme measure and told that he should have appealed to prosecutors, he said he trusted nobody. And then the police threatened him with more torture,” the report said, citing Temirchiyev’s testimony.

The National Torture Prevention Center said that while beatings remain the most common form of maltreatment, reports of suspects being asphyxiated with plastic bags increased in 2015. This method was used in 70 percent of the cases of claimed mistreatment in pretrial detention facilities, the report said. Asphyxiation is favored because it leaves noticeable traces in the victim’s lungs and eyes for only a few hours, thus making such abuse hard to prove.

Other common forms of abuse documented by the report include psychological pressure and verbal humiliation. Deprivation of food, water and sleep, along with the use of tasers and placing needles under fingernails were reported less frequently.

Particular attention was paid in this year’s National Torture Prevention Center findings to conditions in juvenile detention facilities. The reports details instances in which minors were placed in cells together with adults or people of the opposite sex, which is illegal. In 80 percent of cases, minors said they were not told the reason for which they were being arrested.

Out of the 54 children interviewed, 38 claimed they were tortured or abused.

“When they brought me for questioning the first time, a police officer came into the room and said: ‘Maybe we should shoot him?’ and he pulled out a gun and showed it to me. I was so frightened and signed the confession. Then they took me to a different place,” one 17-year old boy told the authors of the report.

Even young offenders are not spared beatings and solitary confinement, which takes place in tiny cells known as “cups.”

“Once, because we would not let the prison wardens into our cell, eight of them came and dragged us out by our feet and hands, beat us and put us inside the cup. We spent about two or three hours in there, while our cell was searched by staff,” one interviewee said.

Official reactions have varied from outright denial and frustration at public complaints to acknowledgement and an acceptance of the need to improve.

Olzhobai Kazybaev, a press officer at Bishkek’s main police department, denied in remarks to news website Kloop.kg that any mistreatment took place in detention facilities. “It is not possible that anybody is beaten because nobody is given access to the cells, and the cells are equipped with video cameras. If someone complains, we can watch the recordings,” he said.

Referring to the reported incidents in the juvenile institutions, Alexander Niksdorf, a spokesperson for the State Penitentiary Service, told EurasiaNet.org it was sometimes necessary to employ robust methods to maintain discipline.

“They did not allow the prison workers into the cell or come out for checks, and they insulted the prison workers. So basically these kids were violating the rules set for prisoners. Naturally there has to be some reaction to such behavior,” Niksdorf said.

Interior Ministry spokesman Ernis Osmonbayev acknowledged that there are problems in facilities under his ministry’s purview and that steps are being taken to tackle them.

The Interior Ministry is stepping up training and monitoring in an attempt to address torture-related issues.

Changes are being made in the way the performance of a police officer is evaluated, including the de-emphasis of arrest quotas, which would encourage officers to use illegal methods in securing confessions. When questioned by members of parliament on the quota issue recently, Interior Minister Melis Turganbayev said that although arrest figures are kept for statistical purposes, the police are scrapping the practice of hitting targets.

Sadyk Makhmudov, who works at the Osh-based Luch Solomona human rights center, said the Torture Prevention Center has had a positive effect by giving victims somewhere to turn. Still, court hearings on these matters drag on for long periods, sometimes years, making the process of seeking justice an exhausting one.

“If we implement all the laws we have — and they are good laws when used the way they are supposed to be — I think there would be even more positive change,” said Makhmudov, whose organization received 24 reports of torture in 2015.

Since purpose-designed legislation on torture was introduced in Kyrgyzstan in 2003, the courts have returned only one guilty verdict, in 2014. In that case, two police officers in the southern town of Bazar-Korgon were sentenced to 11 years in jail for torturing minors to extort incriminating statements from them.

In 2015, Kyrgyz courts filed 34 criminal cases over allegations of torture, a big increase from the six of the year before. Yet, those figures make up a small proportion of the 220 and 199 complaints in 2014 and 2015, respectively.

“This year we submitted several cases to the prosecutor’s office. Despite having enough evidence of torture being committed, our motions to initiate a criminal case were refused for various reasons,” said Khusanbay Saliev, a lawyer at the Bir Duino human rights organization office in Osh. “We play a sort of ping-pong where the local prosecutor’s office rejects [our motion], we appeal to the General Prosecutor’s Office, who refuses, and then sends us back to the local prosecutor.”