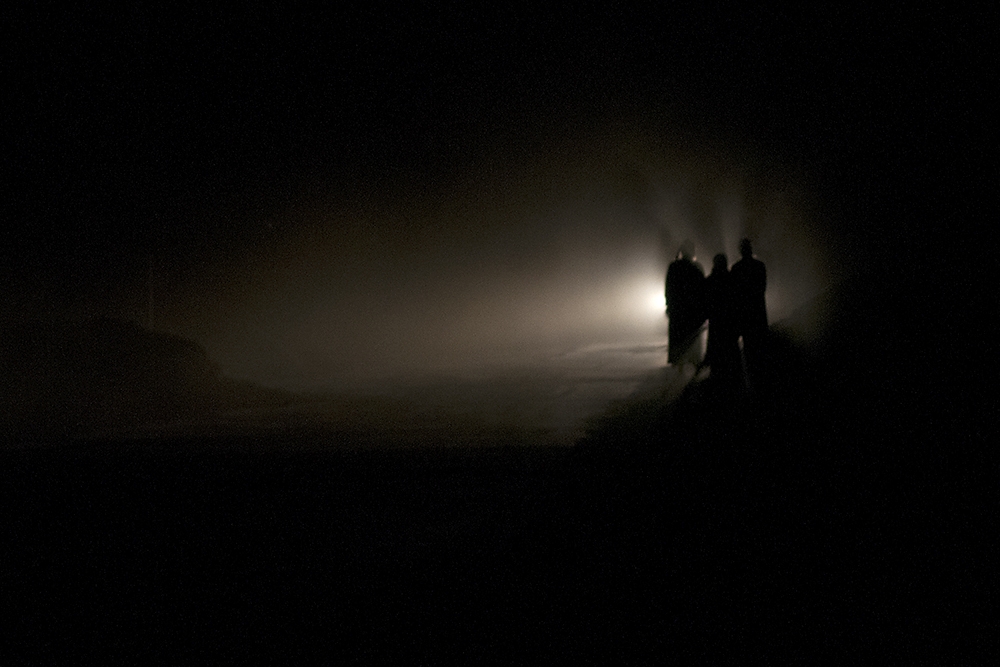 Three woman walk home in the dark in the southwestern Kyrgyz city of Osh in October 2010. A 2012 government survey found that 28 percent of women or girls in Kyrgyzstan had experienced physical, sexual, or emotional abuse by a spouse or partner. (Photo: Dean C.K. Cox)

“They said, ‘Did he use a knife? Did he try to kill you?’ I would say, ‘No,’ and they would say, ‘Okay, you call me when he tries to kill you, because we have more important things to do,’” Asya said, recalling two incidents from 2012.

The episode is one of many documented in a report issued on October 29 by advocacy group Human Rights Watch (HRW), which is pressing for the government of Kyrgyzstan to take more action to address domestic violence.

At the heart of the problem is a combination of social indifference, a failure to enforce laws and a shortage of resources for the victims of physical, sexual, or emotional abuse. A 2012 government survey found that 28 percent of women or girls in Kyrgyzstan had experienced such abuse.

Legislation to protect vulnerable household members is ostensibly in place.

In 2003, following a sustained signature-gathering campaign, Kyrgyzstan adopted a law against violence in the family. According to a United Nations assessment, the legislation marked a considerable improvement in the protection of rights and freedoms for women. It enabled victims to file complaints, request protection orders of up to 15 days and appeal to local elders’ courts.

But many obstacles still lie in the path of serially abused women seeking protection. The HRW report, for example, cites the continuing existence of a culture of victim-blaming and stigma attached to domestic violence. “Women who experienced domestic abuse or forced or early marriage told Human Rights Watch that they often felt enormous familial and societal pressure to keep abuse secret and endure it for the sake of the family,” the group’s report noted.

The taboos are prevalent across the ethnic divide. HRW illustrated the point with several harrowing stories, including that of Nurgul V., who took refuge at her sister’s house after she was kicked in the stomach by her husband while carrying their child. “[My parents] said: ‘You have children. You must take care of them. Be patient. Wait until they grow up. Your time will come. You don’t want your kids to be orphans without a father,’” Nurgul V. told HRW.

HRW said it learned from its research that in the relatively rare occasions when victims do file complaints, police either ignore them or try to persuade victims to drop the case.

Nadejda Domasheva, a psychologist at Crisis Center Arulaan in Osh, said her organization was forced to intervene in 2013 to compel police to take action on behalf of one victim. “The victim called the police 12 times, but they never accepted the case. There was systematic abuse. [Her husband] locked the door on her, burned her belongings,” Domasheva told HRW. “When we approached the police it was the thirteenth time. They had never accepted the case before.”

Cultural attitudes again appear to be at the heart of police reluctance to address such cases. One prevalent view is that pursuing perpetrators of domestic violence would only lead to the dissolution of families, leading to more anguish and, ultimately, social upheaval.

One former Interior Ministry official, Gulsara Alieva, suggested that a lack of resources limits police officers’ scope of action. “Here the police are so poor they don’t even have fuel in their cars, so they can’t really take action,” Alieva told HRW.

When protection orders are put in place, they are frequently not enforced by police. “Even though contact between the two parties is in direct violation of protection orders, police and judges told Human Rights Watch that they do not have the right to ask a perpetrator to leave a shared home,” the HRW report noted. “They believed doing so would violate the perpetrator’s constitutional and property rights.”

The judicial system also seems to underperform in addressing domestic abuse. Aisuluu G., 27, said her beatings began within months of her marriage, which was the outcome of the bride-kidnapping practice that also blights many women’s lives in Kyrgyzstan.

Against the advice of her own mother, Aisuluu eventually pursued divorce proceedings, only to find an unsympathetic judge presiding over her case.

“The judge asked: ‘Why would he beat you? You were not doing the housework? Or are you sleeping around?’” Aisuluu told HRW.

Again, courts tend to emphasize reconciliation in the belief that such an outcome would ultimately better serve the family in question.

A judge in the city of Naryn told HRW that he attempted to explain to couples that such cases were commonplace and avoided handing down custodial sentences, even when violence was documented in a case. “Very rarely do we put people in detention in this category – maybe one out of 100 is put in detention. In such cases when injuries are not severe, we try to preserve the family. We give time to the perpetrator to rectify the problem,” said the judge, whose name was withheld.

The proposals have come under a welter of objections, including from the Finance Ministry, which objects that there are not sufficient public funds to establish the residences and shelters mandated by the legislation.

Margolis said that even when resources are stretched, there are still measures authorities can adopt that are already in law.

“Many countries around the world struggle with a lack of resources, but this is not a sufficient excuse for allowing half the population to remain at serious risk,” she said.