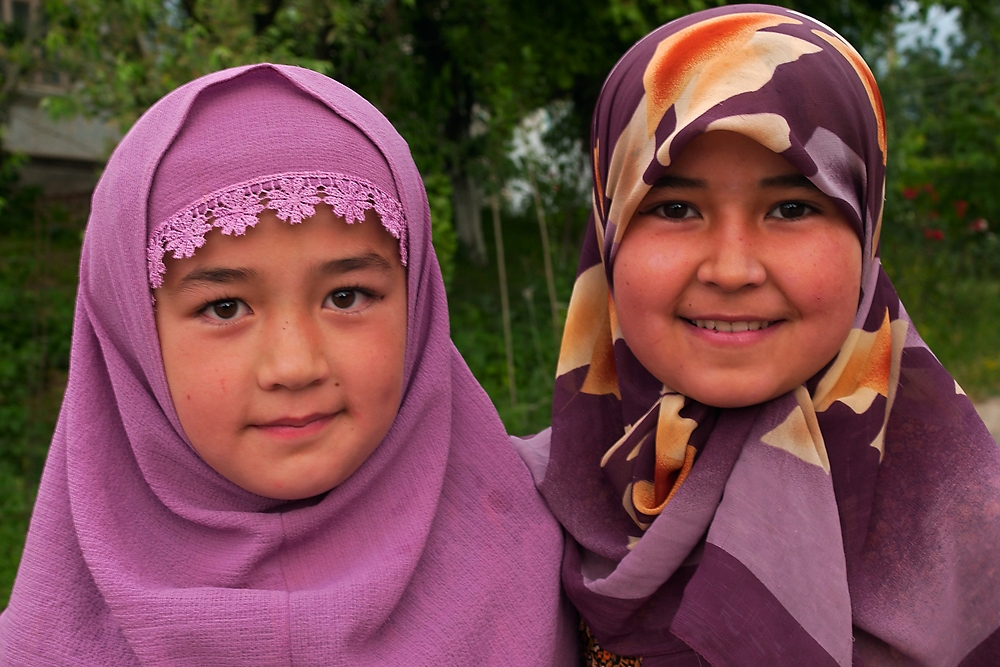 Girls on their way to school wear Islamic headscarves in the southwestern Kyrgyz city of Osh. (Photo: Dean C.K. Cox)

Set against the backdrop of a presidential campaign, a debate in Kyrgyzstan over Islam’s place in public life is gaining steam.

The debate is centering on an effort by Muslim civil society groups to enable schoolgirls to wear Islamic headscarves, or hijabs, in public schools. The campaign is pitting two government bodies against each other, while sparking debate within liberal circles over where to draw the boundaries separating mosque and state.

Kyrgyzstan is not alone among predominantly Muslim post-Soviet states in wrestling with religious rights-related issues. Azerbaijan, most notably, also has found itself roiled by a hijab controversy. Although believers in Kyrgyzstan have agitated in the past for the right of pupils to wear hijabs, this year they are receiving support from the Muftiate, a government body that oversees Muslim spiritual life.

The hijab issue shot to the forefront of public attention on September 13, when a coalition of Muslim groups, led by the Islamic women’s organization Mutakallim, held a news conference. According to Jamal Frontbek kyzy, Mutakallim’s leader, coalition members have received “thousands” of complaints from parents since the start of the school year about harassment by teachers and school administrators toward hijab-wearing students.

Mutakallim representatives have accused the Ministry of Education and Science of implementing a secret ban on headscarves, adding that such action violates the constitutional guarantee of religious freedom and protection against discrimination. Ministry officials have adamantly denied a ban, saying the only reason headscarves might not be allowed by some teachers or administrators is because they are not a part of the official public-school uniform for female students.

Unsatisfied, Mutakallim and partner groups picketed in front of the ministry on September 19. The Muftiate supported the protests and posted a hotline for complaints on its website. At the insistence of the protesters, Education Minister Kanat Sadykov issued written confirmation that no ban was in place.

Though the Muftiate says the issue has been resolved, Mutakallim members say they will keep up their campaign as long as they continue to receive complaints. “The minister,” says Frontbek kyzy, “is playing a two-sided game.” According to her, complaints continue to come in from parents whose daughters endure harassment at school for wearing headscarves.

Seventy-five percent of Kyrgyzstan’s 5.6 million residents consider themselves Muslim. Due to the country’s nomadic heritage and Soviet legacy, however, observance of Islamic religious rites among Kyrgyz is relatively lax compared with some neighboring states, including Uzbekistan. Many Kyrgyz even view a conservative approach on faith with deep suspicion.

For civic activists in Bishkek, the hijab campaign is fueling a dilemma: they feel a commitment to the concept of freedom of conscience, yet some sense that Mutakallim and associated groups are striving to undermine Kyrgyzstan’s secular orientation.

Some openly admit to feeling uneasy about the prospect of faith making greater inroads into society. For example, Gulnara Ibraeva, a sociologist at the American University of Central Asia, said groups like Mutakallim “threaten the world I am building and that I support. I have a personal interest in a secular society and in women’s freedom. That is why I call [their behavior] extremism.”

Yet others feel the headscarf debate is about an equal right to education. On September 23, the Council of Human Rights Defenders, a group of eight prominent activists, issued a statement saying that a unilateral ban on headscarves “discredits the principles of secular government.”

Council member Burul Makenbaeva expressed concern that singling out observant Muslims could provoke a backlash. “One of our concerns was that excluding these girls from school would lead to radicalization. If there is going to be a law limiting headscarves, then it should only be [implemented] after a public discussion, in a democratic fashion,” she told EurasiaNet.org.

Kyrgyzstan’s self-described traditionalist movement, which emphasizes a Kyrgyz identity predating Islam, has also joined the fray, with a coalition of groups collecting signatures opposing hijabs in schools. One member of a youth organization has even offered to personally defend the minister of education. “The hijab is foreign to us,” said Chinara Seidahmatova of the Fund for the Rebirth of the Spiritual Legacy of the Kyrgyz. “Kyrgyz women never wore a headscarf until they were married. Here we have eight-year-old girls wearing [a] hijab. It’s simply ignorance, even theological ignorance.”

Those opposed to hijabs in schools acknowledge that the observance of Islamic religious tenets is on the rise. In downtown Bishkek, the most urban and secular part of the country where the azan – the Islamic call to prayer – is seldom heard, it is becoming common to see women covering their hair, wrists, and ankles. Officials in Bishkek report that a record 30,000 people took part in public prayers marking the end of Ramadan this year. They included Prime Minister Almazbek Atambayev, who has incorporated Islamic as well as nationalist themes into his presidential campaign.

Despite the signs of expanding piety, there is little substantive debate within the government over how to address issues connected to the religious revival.

“Islam represents a new movement in Kyrgyzstan for talking about social problems,” says Kadyr Malikov of the think-tank Religion, Law, and Politics. “Yet we have no model of what kind of state we should build, or of what it means to be a secular state in a Muslim-majority country.”