The return of many male migrant laborers from Russia during the pandemic seems to have compounded the crisis. 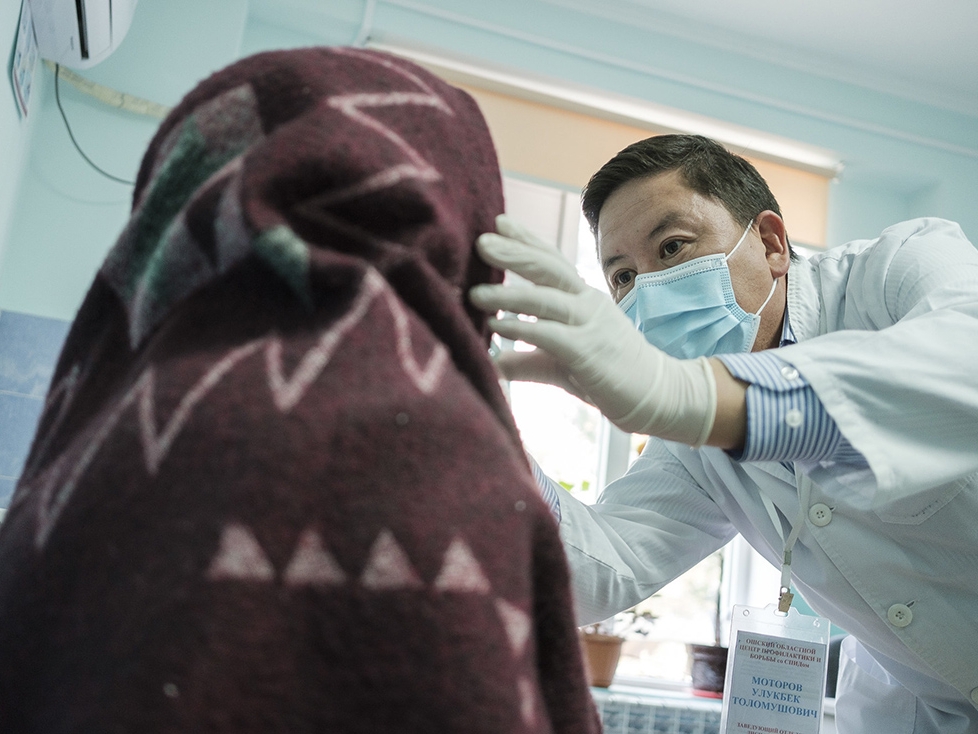 A doctor examines an HIV patient in Osh (UNDP)

Ever since testing positive for HIV, Aysana, 32, has been spurned by her relatives and neighbors in her home village in southern Kyrgyzstan’s Osh region.

Aysana, whose name has been changed for her privacy, made the grim discovery last year.

“Five years ago, my husband […] left to work in Russia. I stayed behind with my two daughters in the house of his parents. In 2020, he had to return home, because of COVID. A year later, I gave birth to a son. During a blood test, I was diagnosed with HIV,” Aysana told Eurasianet.

Her husband responded with a blend of denial and hostility.

“When he learned about [the diagnosis] he started swearing. I asked him to take the test, but he refused and immediately left,” Aysana said, tears rolling down her cheeks.

Aysana said her husband is accusing her of infidelity and demanding a divorce. As for the son he had been awaiting so long, he has lost all interest, she told Eurasianet.

“My conscience before the Almighty is clear, and I am thankful that the child was born without HIV. But I’ve been told that to avoid any risks, I need to give up breastfeeding, so I buy formula,” she said.

Aysana is now contemplating moving to the regional capital, Osh, to get away from the withering sidelong glances of her fellow villagers. Transferring to a city will not be easy without financial support, however.

With HIV once again on the rise in Kyrgyzstan, a growing number of women are in this same predicament. According to Healthy Ministry figures from November, more than 12,000 people in the country are known to have contracted HIV. And the rate at which the virus is spreading is increasing, officials say.

“This is because some migrants return home and without knowing it and without suspecting that they are carriers of HIV, transmit the virus to their spouses. As a rule, many do not want to take the test, because they are so confident that they are not infected,” Ulukbek Motorov, an epidemiologist at the Osh Regional Center for Preventing and Combating AIDS, told Eurasianet.

The return of many male migrant laborers following the outbreak of the COVID-19 pandemic, which struck Russia especially badly, only compounded the crisis.

The taboos around this problem and its likely sources are a major hurdle toward awareness-raising on testing. If high-risk categories for HIV infections have customarily been made up of highly sexually active people or drug users, the profile is changing somewhat. Official data shows that while 63 percent of known HIV cases in 2017 were the result of sexual activity, that figure has since grown to 86.7 percent.

The unspoken implication is that one of the partners is engaging in sexual relations outside the couple.

Masalimova attributed lapses in attention to sexual health in part to the rapid and widespread emergence of cheap synthetic drugs.

“Under the influence of narcotic intoxication, a person loses self-control and neglects to use protective equipment,” she said.

Masalimova was insistent on emphasizing that migrant laborers should not be branded as the root of the problem and that more research was needed before definitive causal links could be established.

“Nobody has conducted any studies. We cannot speak about this with certainty until reliable data are obtained. Of course, citizens [earning money abroad] are vulnerable due to the fact that when they are in migration, in Russia for example, it is difficult for them to access preventative and medical care for HIV,” Masalimova said.

Mirlan, 41, a native of the city of Kyzyl-Kiya in the southern Batken region, has been working in Russia for the past decade.

“After the pandemic, I returned to work in the Moscow region,” said Mirlan, whose name has also been changed to preserve his anonymity. “When I was tested at Sakharovo (a center in Moscow where foreign nationals obtain and renew work permits), it turned out I was positive for HIV. At first, I did not believe it, then I did the test again, and it was all confirmed.”

The diagnosis had cataclysmic consequences. Mirlan divorced his wife. Unable to get work in Russia, Mirlan returned to Kyrgyzstan and makes ends meet with occasional jobs picked up at a local employment agency.

“I am digging coal at the mine, there are no other jobs in Kyzyl-Kiya. I’m under medical supervision, I have been taking pills and all the necessary drugs. Thank God I do not have AIDS, only HIV. You can live with this. I just regret that I did not protect myself when engaging in sexual relations. Now I’ve lost my family, my wife doesn’t even want to listen to me, but I still give a little money to the children,” Mirlan said.

Given the sensitivities around testing, one looming novelty could provide some relief and clarity.

“For the first time in Kyrgyzstan, a testing machine is to be installed in Osh, ahead of the New Year, which will enable people to take an express HIV test free of charge and anonymously,” Nurlan Zakirov, head of the social development department at Osh city hall, told Eurasianet.

“Our doctors explain in plain language how people with HIV who receive antiretroviral therapies are not contagious and that there is no danger to their health if they follow the doctor’s instructions,” he said.