Kyrgyzstan Hosts First “World Nomad Games,” But Can They Unite the Nation? 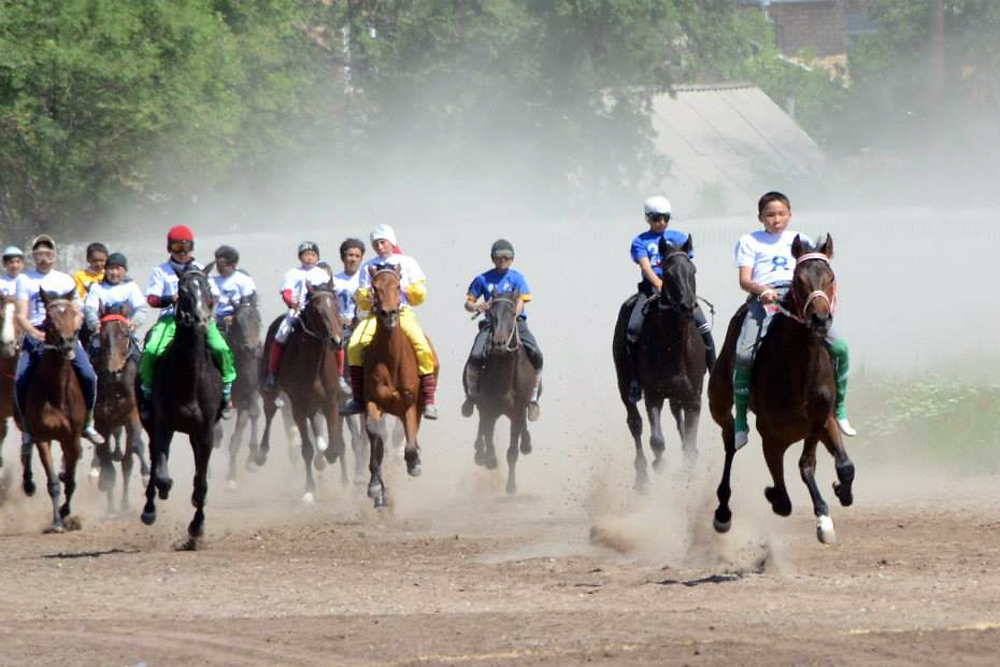 In the spring of 1206, legend has it, the Mongol steppe saw the largest-ever gathering of nomadic tribes. Featuring athletic competitions and festivities, the weeks-long event marked the unification of warring Mongol tribes under the leadership of Genghis Khan, the legendary Mongol conqueror.

The Mongol Empire is now history, but the idea of using nomad’s sports to unify a nation has lived on in a newly independent state of Central Asia that is searching for an identity.

With generous government support, Kyrgyzstan hosted the first World Nomadic Games September 10-14, an event “dedicated to show the history of nomad nations, their traditions, lifestyles and culture,” according to the organizers. Over 400 athletes from 19 countries gathered in a resort on the shores of Lake Issyk-Kul to compete in wresting, archery, Kok Boru (a game where mounted riders face off over a dead goat), Ordo (a Kyrgyz board game) and Kyz Kumai (chasing girls on horseback).

The Kyrgyz government cast the Games as an event of global significance, with a strong undercurrent of nation building: “The Games will give a powerful boost to rehabilitating original national sport disciplines and reviving the spiritual consciousness and historical memory of nomadic peoples of the world,” said a statement posted on the official website.

President Almazbek Atambayev, who has called 2014 the year of strengthening Kyrgyz statehood, made no secret of his nation-building intentions. “The Kyrgyz people, with their rich history, culture, and traditions, were among the early nations that founded nomadic civilization. Let us follow the good legacy of our ancestors in joining ranks and building our future!” Atambayev said at the official opening ceremony.

Supporters hail Atambayev’s initiative. “The Games were the first event in Kyrgyz history that brought the whole nation together. When Atambayev walked [into the hippodrome] with the Kyrgyz team, spectators stood up, and there were tears many people’s eyes,” Danir Imanaliev, deputy head of Issyk Kul region, who helped organize the Games, told EurasiaNet.org. “The whole nation felt pride and unity at that moment.”

The Nomad Games are also part of Atambayev administration’s objective of strengthening collaboration among Turkic-speaking nations. The idea of the Games first appeared during the 2011 visit of Turkish Prime Minister Recep Tayyip Erdoğan to Kyrgyzstan. Atambayev has repeatedly said Turkey is a top partner. Though he attended a victory event when Erdoğan won the Turkish presidency in August, Erdoğan did not appear at the Games in Issyk Kul.

Indeed, decades of talk of Turkic brotherhood (four of the five Central Asian nations plus Azerbaijan speak a language related to Turkish) have failed to produce concrete results. Most meetings of Turkic nations end in potboiler platitudes, but little action. Despite the Atambayev administration’s invitations to other Turkic presidents, the only foreign leader who attended the Games was the president of the Russian republic of Tatarstan, Rustam Minnikhanov.

Locally, reactions have been mixed. In the lakeside resort town of Cholpon-Ata, which hosted the Games, a dozen residents randomly interviewed by EurasiaNet.org at the venue were effusive, particularly noting that admission was free.

“I am also proud of Kyrgyz team which won many medals and became famous around the world!” said Jailkan Ismailova, 85, a retired teacher. “I am very grateful to Atambayev for putting together such a great show worthy of the praise of our ancestors.”

But others were not so upbeat. Several spectators slammed organizers for failing to provide enough toilets or even a schedule of events.

“Of course, there are flaws when you have little time to prepare. But keep in mind that glitches happened even at the [2012] London Olympic Games,” one organizer said on condition of anonymity.

If Atambayev’s administration was hoping the events would unite the Kyrgyz nation, such hopes appear to be ill founded. Concerns about lavish spending dogged the run-up to the Games, prompting the Culture Ministry to announce it was dropping its budget from $3 million to $1.5 million.

For several residents of southern Kyrgyzstan, who have been without gas since April, the sum was still extravagant. Vechernii Bishkek, a prominent daily, cited the country’s mounting energy emergency and other urgent needs when it dismissed the Games as “a feast in time of plague” on September 9.

Unsurprisingly, in a country where transparency is always a concern, some media outlets accused organizers of pilfering state funds.

As for uniting the nation, some minorities found the emphasis on ethnic Kyrgyz traditions insulting. “All these celebrations honor only Kyrgyz history, traditions, and culture. They [Kyrgyz officials] pay little or no attention to contributions [to Kyrgyz statehood] made by others [ethnic groups such as Uzbeks, Russians, and Tajiks],” said Khusanboy, an ethnic Uzbek construction worker from Osh, who declined to give his family name, citing concerns for his safety following ethnic violence in his hometown in 2010.

The Games ended with music and fanfare on September 14, but the question lingering on the minds of many participants is whether Kyrgyzstan has begun an enduring tradition. Thus far, none of the participating countries have shown eagerness to host the next World Nomad Games.

Agamurat Bayramov, a journalist with Turkmen State TV who was covering the Games, said the burden was now on Kyrgyzstan’s neighbors to continue the tradition. “If these events are not held every two years, public interest in them will decline,” he said.