Kyrgyzstan is turning over the biennial event to other Turkic countries. 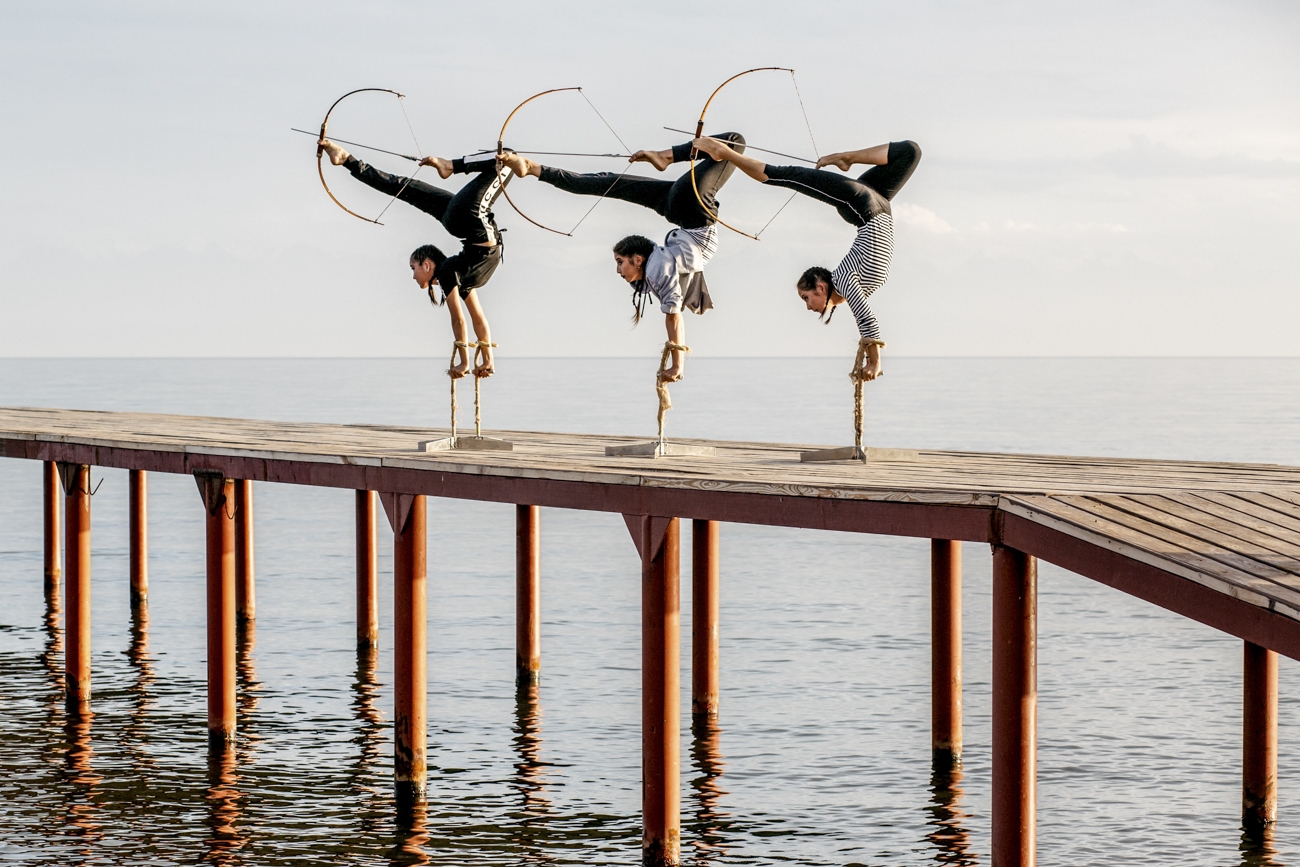 Chynara Madinkulova and her colleagues pose on Lake Issyk-Kul in front of the amphitheater built for the previous World Nomad Games. This same archery pose made her the face of the 2016 games. (Ella Mack/ellamackphotos.com) 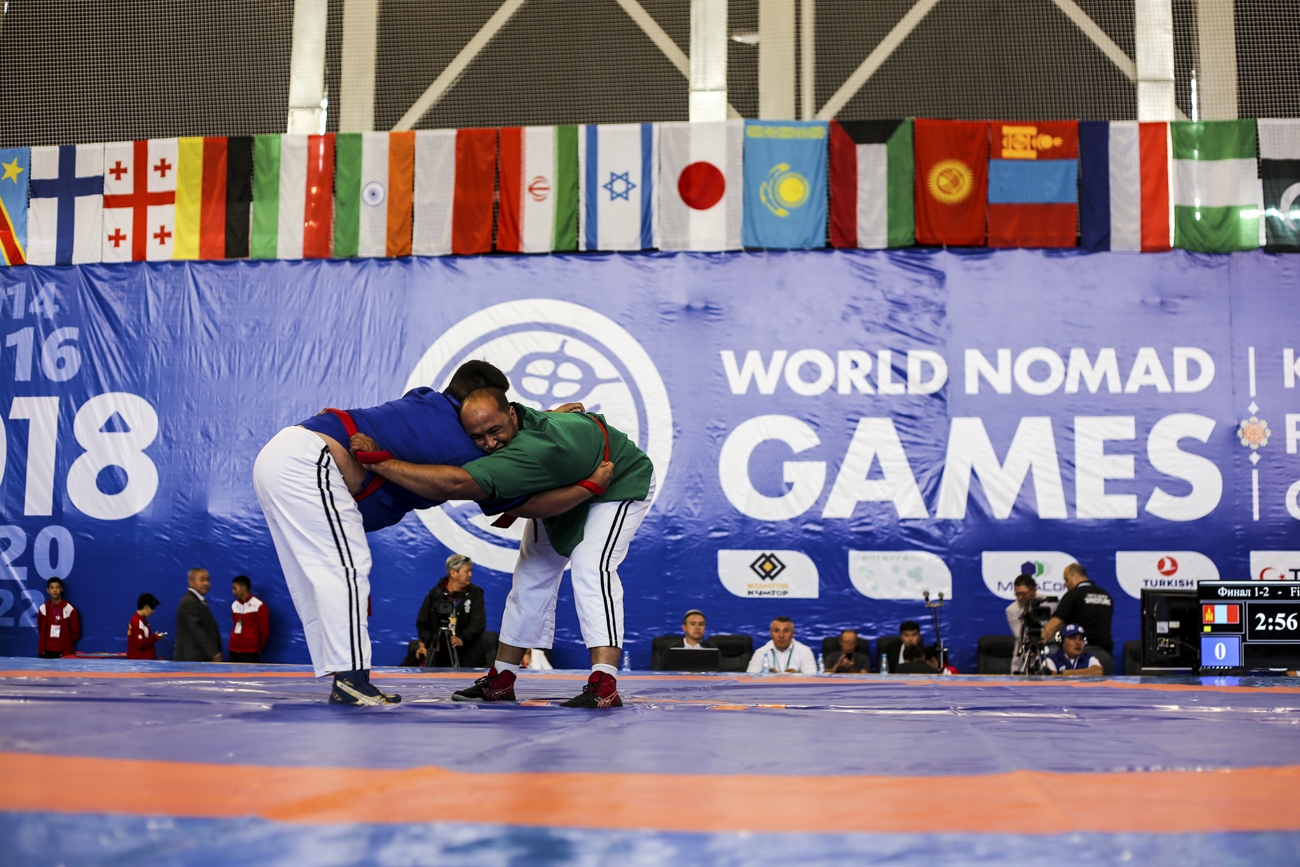 Wrestling’s opening day at the World Nomad Games. In this match between Mongolia and Turkmenistan, the wrestler in green (Turkmenistan) handily defeated his opponent to win the gold. (Nicholas Muller) 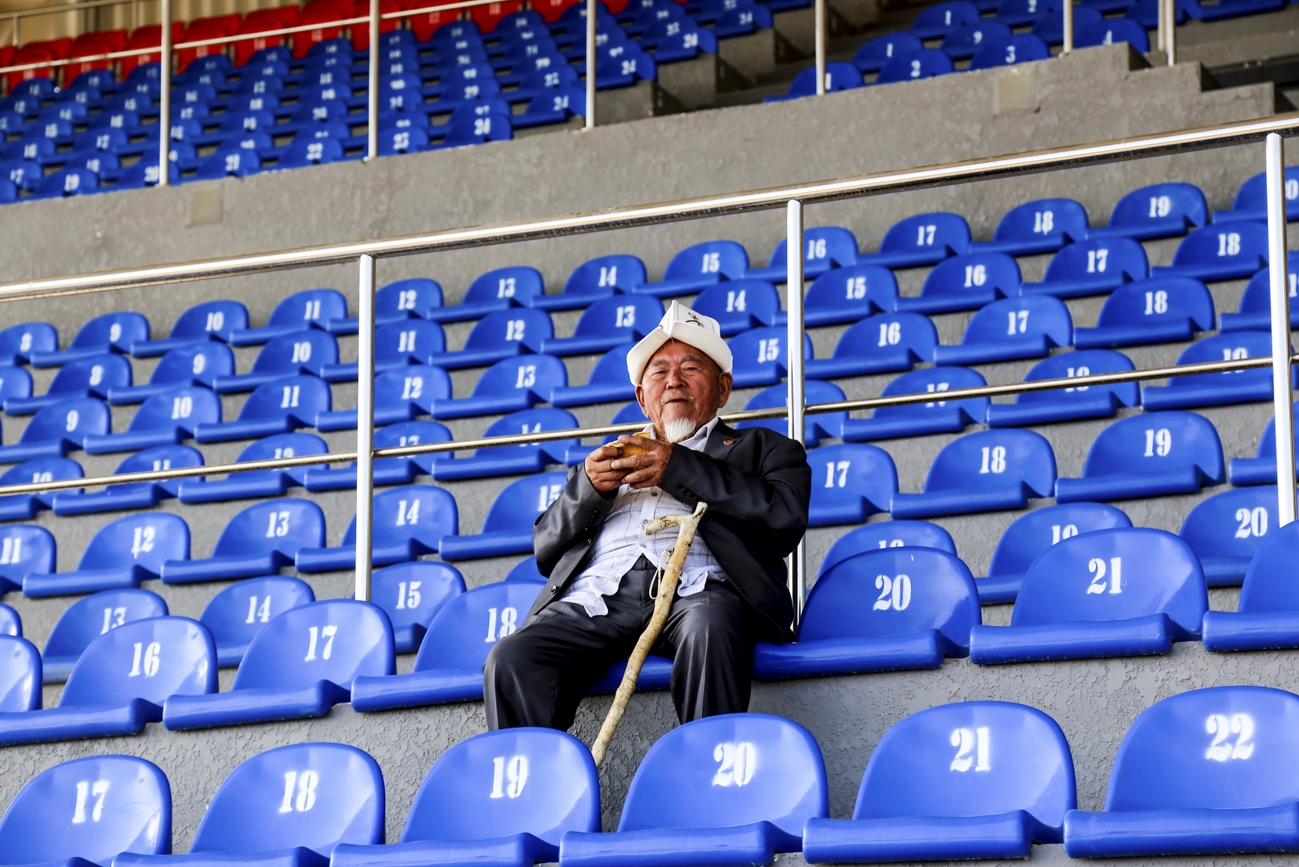 A Kyrgyz man from Osh secures an early seat for the opening ceremony. The 6,000-seat stadium was filled to capacity. (Nicholas Muller) 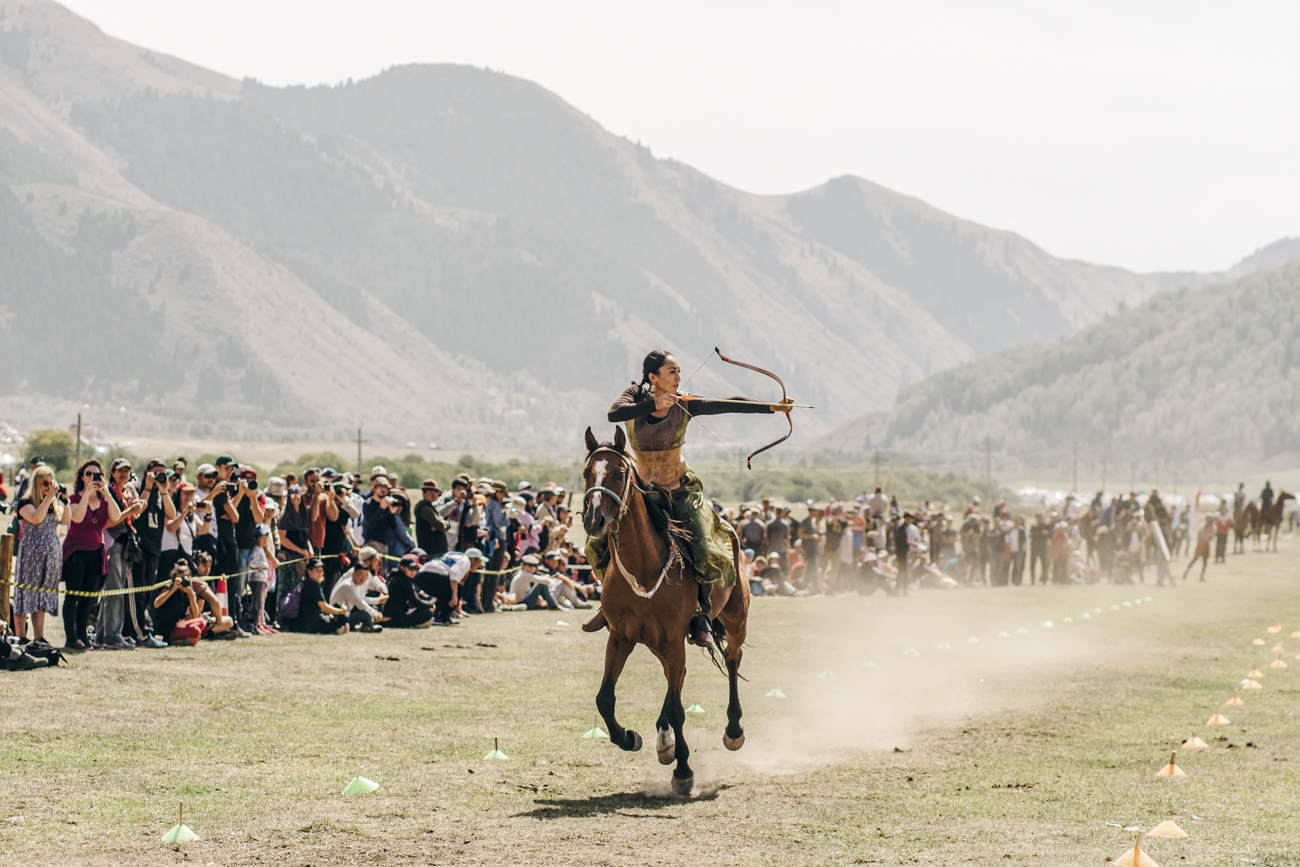 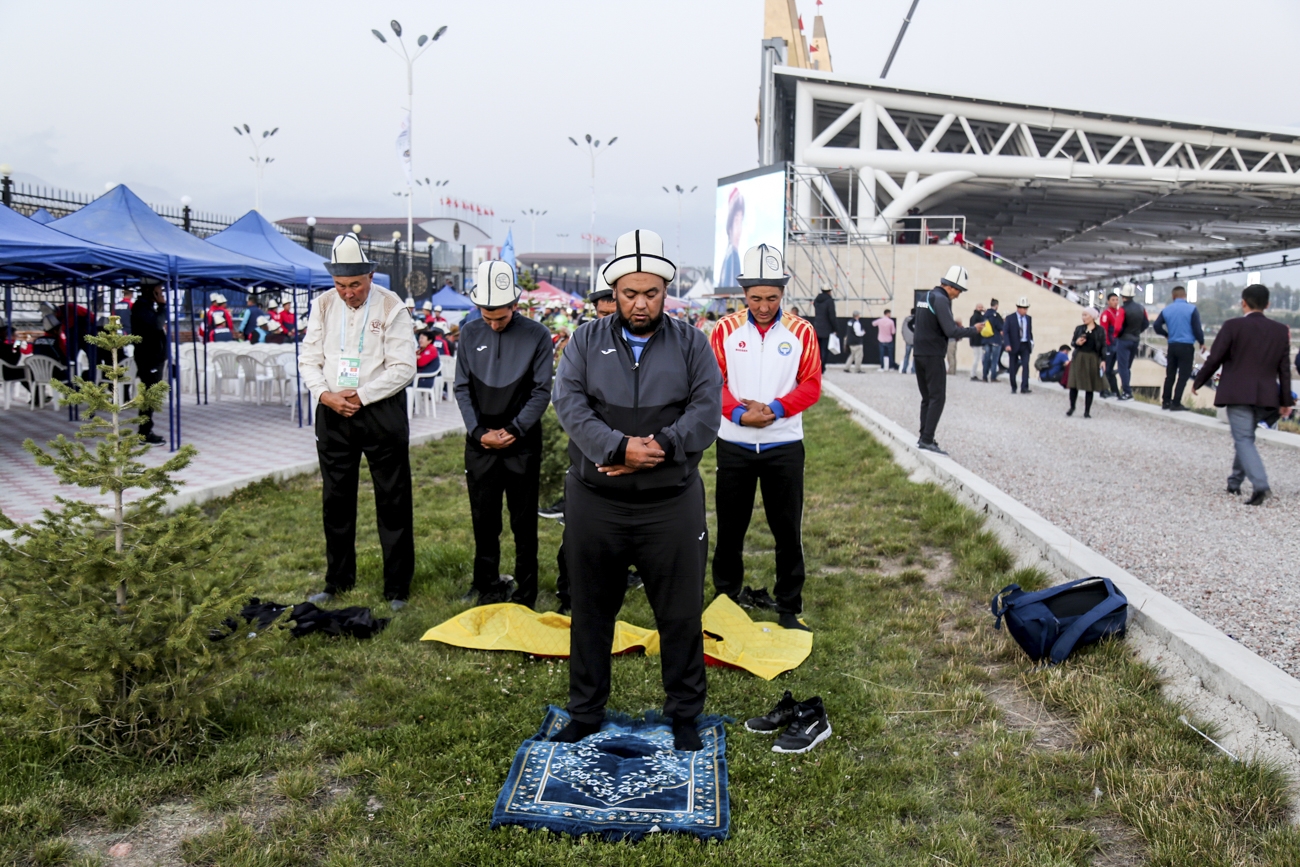 Referees pause to pray on the lawn at the hippodrome before the action begins at the World Nomad Games. (Nicholas Muller) 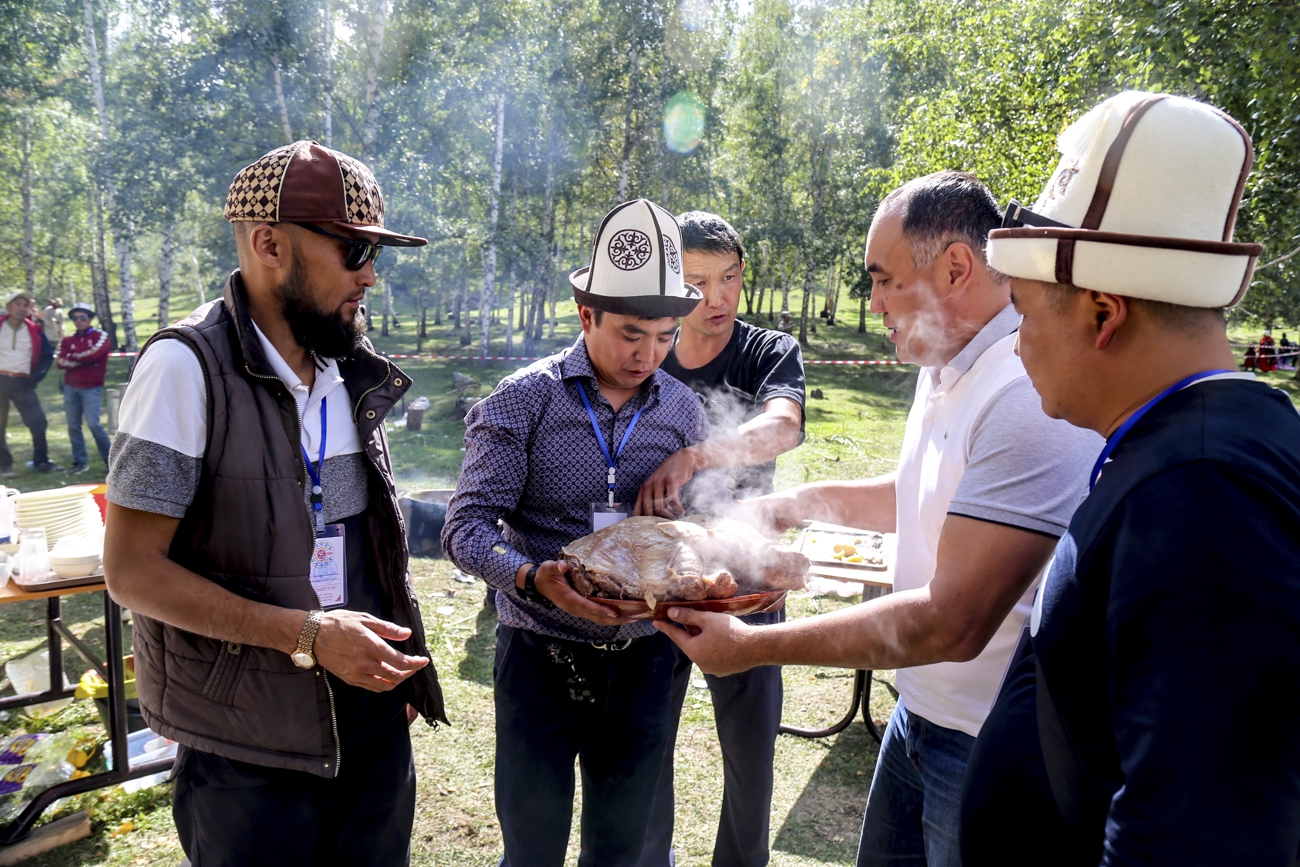 Organizers and cooks inspect the most desired part of Beshbarmak (horse meat), which is brought out last and served to VIPs. (Nicholas Muller) 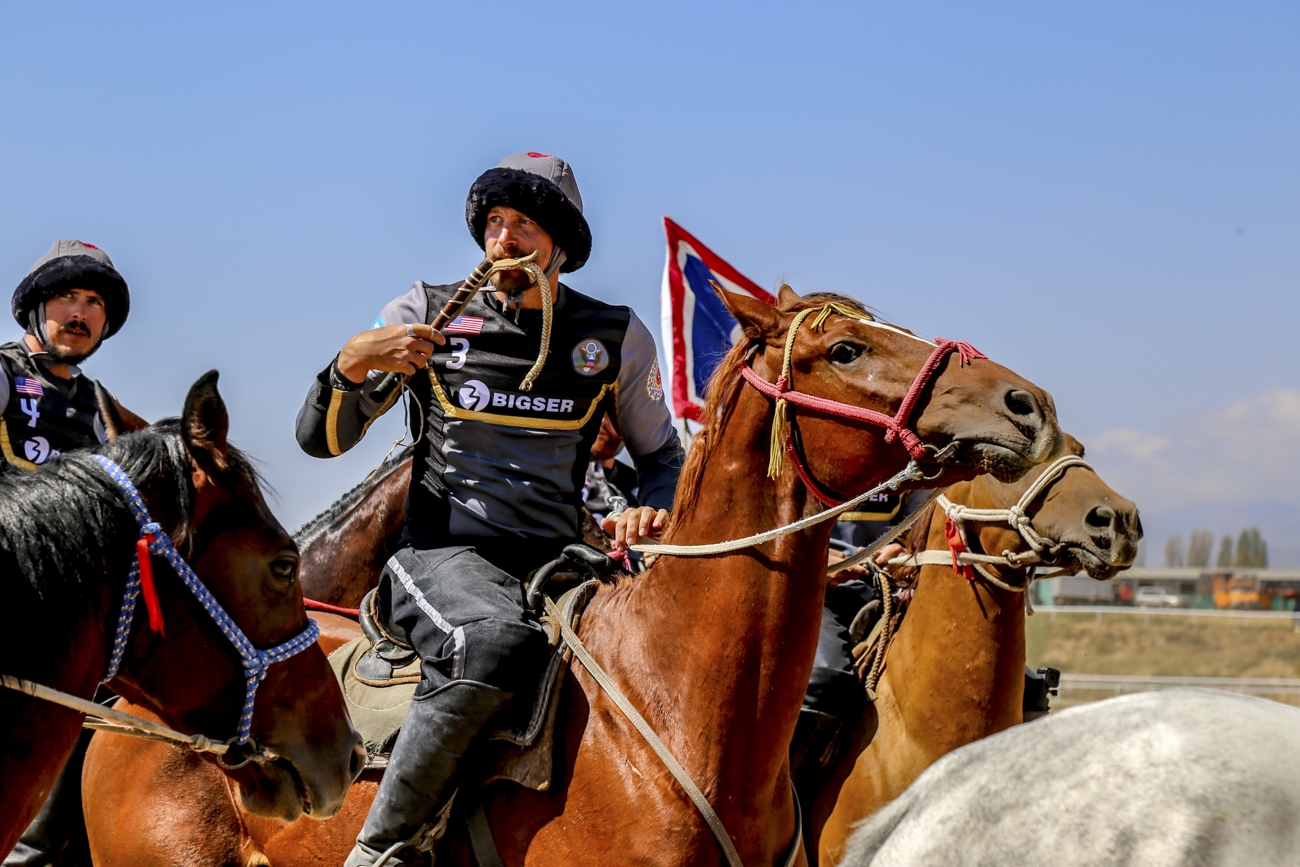 Scott Zimmerman, a rancher from Wyoming, plays for the U.S. Kok Boru team. A second-round injury caused him to sit out the game against Kazakhstan. (Nicholas Muller) 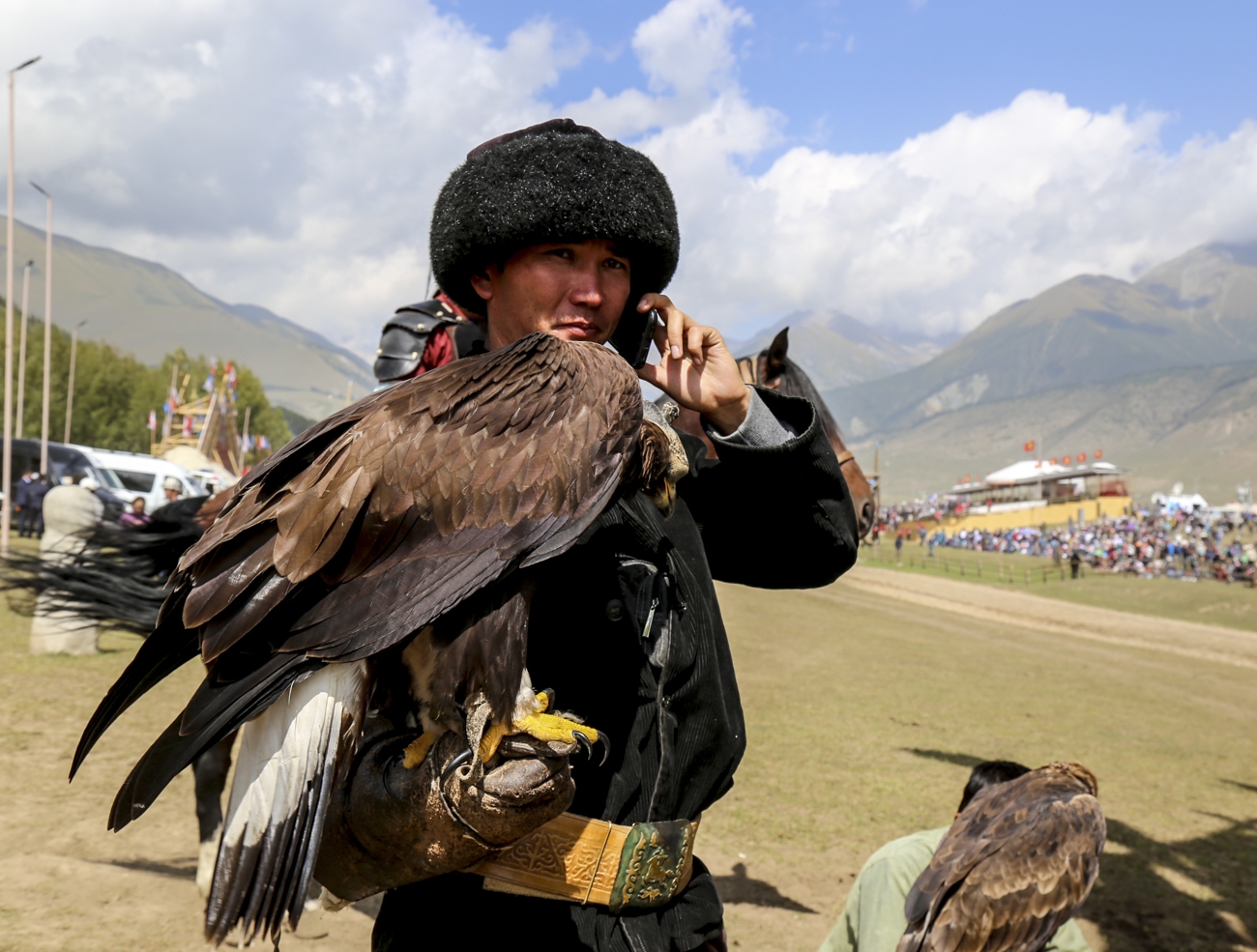 A falcon hunter on his phone at Kyrchyn Village. (Nicholas Muller) 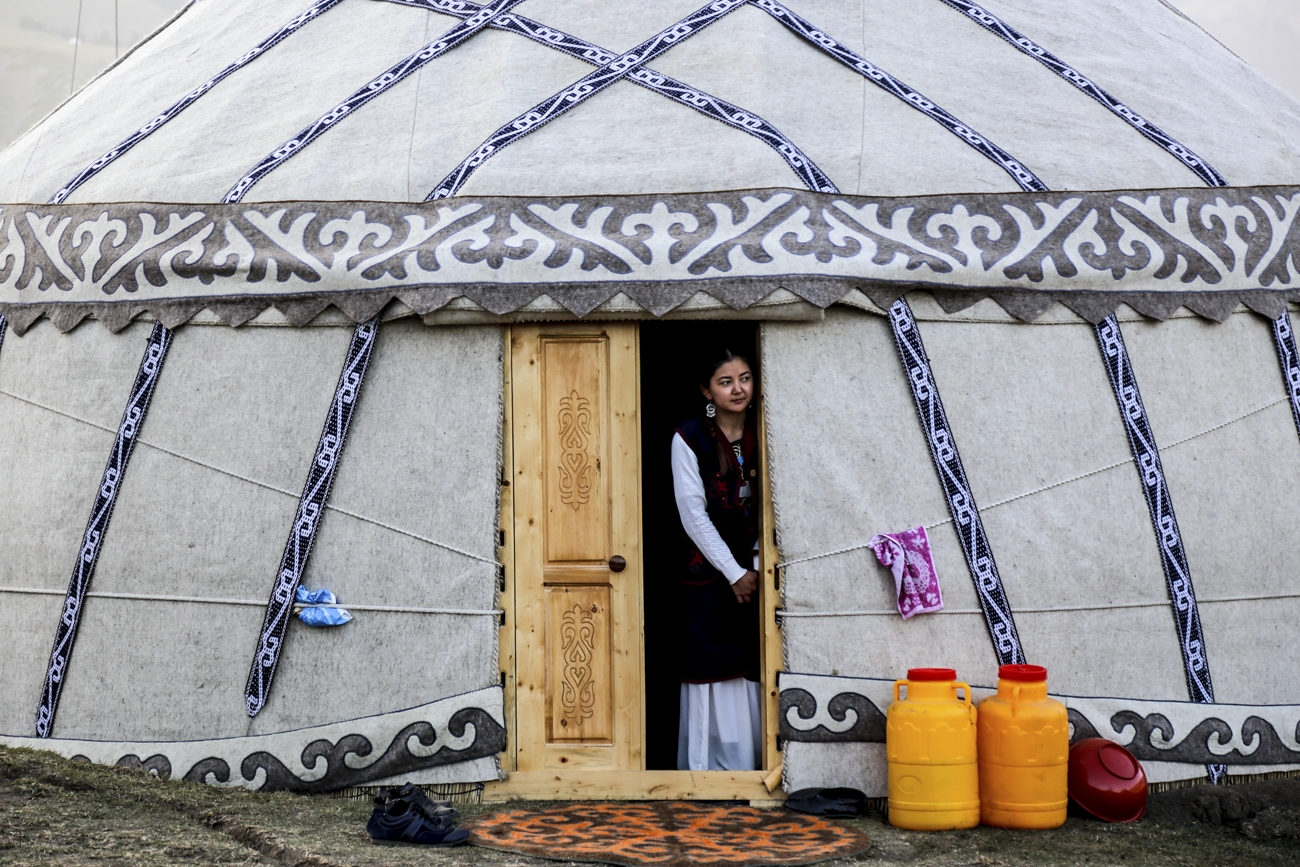 A young woman peeks out of her yurt at Kyrchyn Gorge. (Nicholas Muller) 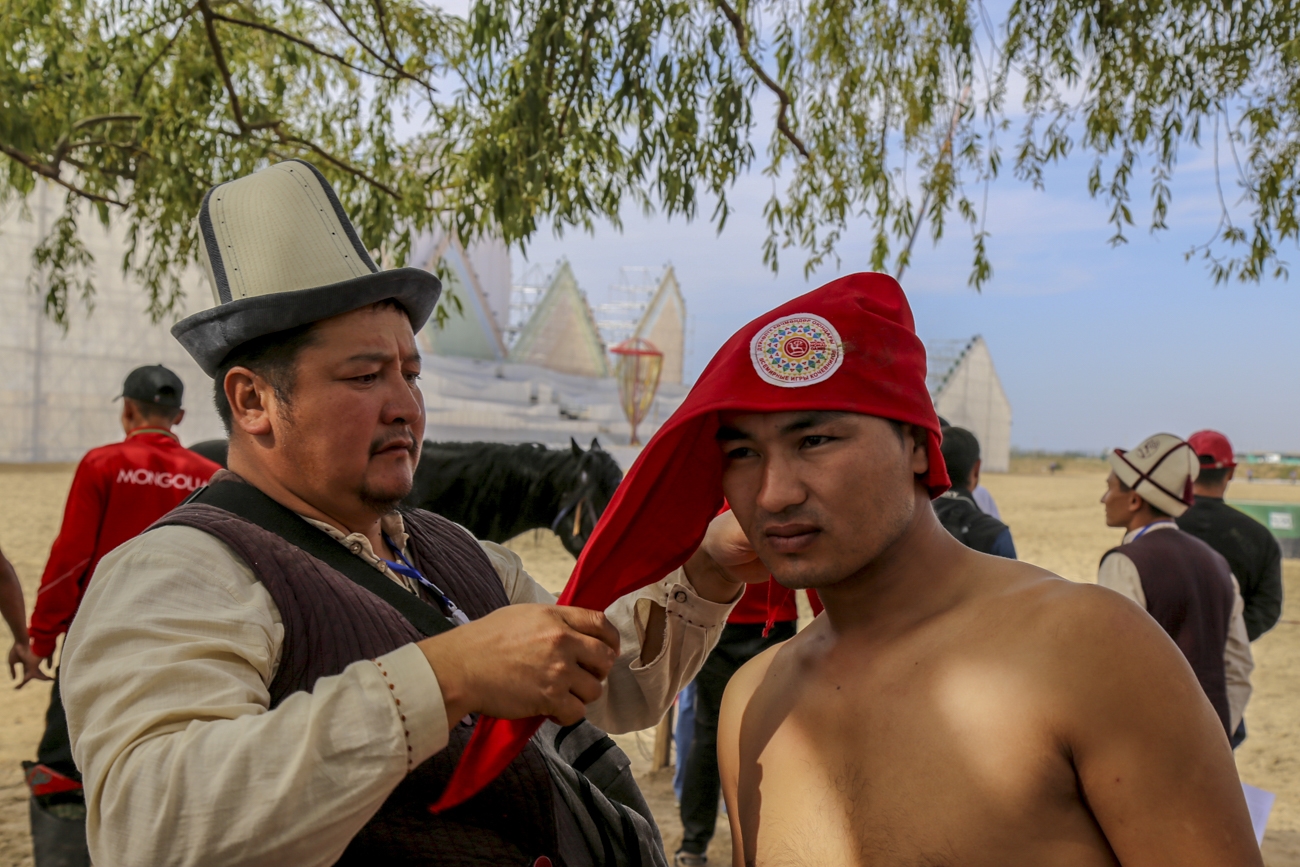 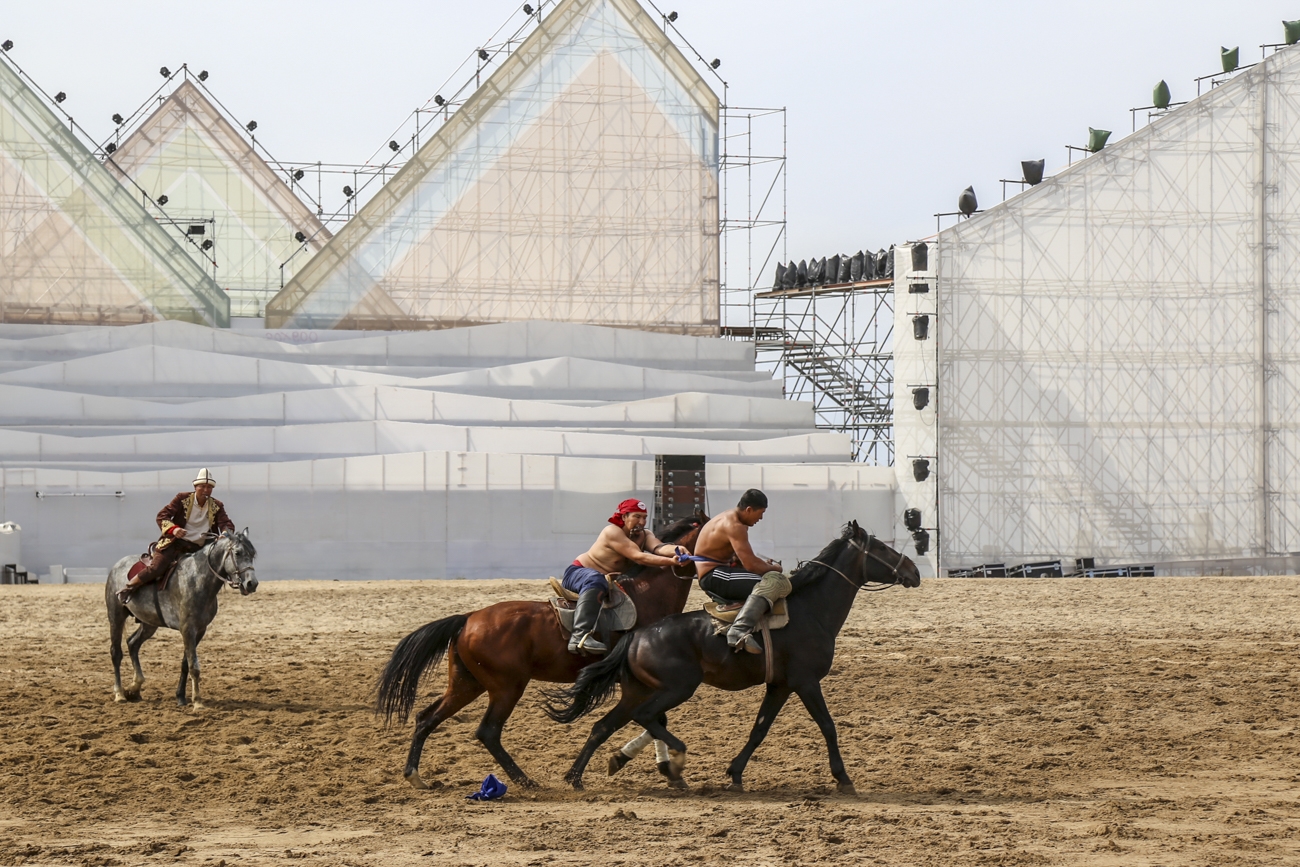 The traditional sport Er Enish, or horseback wrestling, at the Hippodrome. (Nicholas Muller)
prev
next

Google “World Nomad Games” and one of the first images to appear is of Kyrgyz contortionist Chynara Madinkulova firing an arrow with her feet while doing a handstand on crutches.

The picture, by a Russian photographer at the 2016 edition of the games, went viral in the days after the stunt.

“Men just declared truce in the gender wars,” tweeted a business professor at Arizona State University, in a typical response to the photo.

For cash-poor Kyrgyzstan, this was precisely the kind of eye-catching PR that helps justify the tens of millions of dollars poured into hosting the biennial event since 2014.

“I was so nervous,” Madinkulova, now 18, recalled to Eurasianet this week at a training camp by Lake Issyk-Kul’s azure, mountain-ringed waters.

A crowd including hundreds of foreign tourists immediately burst into thunderous applause.

“I feel so much pride for my country here. The World Nomad Games allow us to show Kyrgyzstan to the whole world,” enthused Madinkulova, who received around $150 in local currency for participating.

Organizers say the event sold 6,000 tickets this year and drew over 2,000 athletes from more than 70 countries. They participated in dozens of traditional Turkic pastimes, ranging from horseback wrestling to strategy games.

With the third round of the games now coming to a close, Kyrgyzstan is preparing to turn the event over to another Turkic nation. Earlier this week, Turkish President Recep Tayyip Erdogan pledged his country would play host in 2020.

Erdogan attended the September 2 opening ceremony in Cholpon-Ata, along with Hungarian premier Viktor Orban and the leaders of Azerbaijan, Kazakhstan and Uzbekistan. The games coincided with a summit of the largely symbolic Turkic Council.

“I’m not sad [that the games are leaving Kyrgyzstan]. I think it is wonderful other countries have taken an interest in our games,” she said, adding that she hopes to participate in Turkey.

The togetherness of Turkic peoples is a theme close to Erdogan’s heart, even if it has not always translated into meaningful foreign policy wins in Central Asia.

A Turkish diplomat attending the games told Eurasianet that his country would aim to “expand on what has already been achieved” by Kyrgyzstan.

If Turkic brotherhood is a key theme of the World Nomad Games – countries without Turkic links tend to send only token delegations – fraternalism takes a back seat in the more aggressive competitions.

In kok boru, a physical game often likened to polo but played with a goat’s carcass instead of a ball (and known elsewhere as buzkashi), the superpowers are Kyrgyzstan and Kazakhstan – and their rivalry is intense.

Kazakh player Akon Nizhen told Eurasianet ahead of the tournament that avenging a demoralizing 15-3 loss to Kyrgyzstan in the 2016 final that saw a Kazakh player suffer a fractured skull was “important for the pride of our country.”

A bilateral spat that briefly threatened to spiral out of control last year added extra spice to a hotly anticipated clash.

But the two never met. Kazakhstan crashed out of the tournament at the semi-final stage against Uzbekistan, having skipped the first game against a team from Russia’s Krasnoyarsk region comprised wholly of Kyrgyz migrants.

Justifying the no-show, the Kazakhs complained bitterly that the Kyrgyz organizers had failed to find them horses on time.

Elsewhere in the same tournament, a goodwill team of cowboys sent by the United States bowed out at the first hurdle again, albeit with fewer injuries than in 2014.

A horseman from the Afghan team, who claimed to have served under the late warlord-cum-defense-minister Mohammed Fahim, told Eurasianet that he was disappointed his country had not had a chance to face off against the U.S.

“We had been hoping to play the Americans,” he said with a smile.

Farewell, but not goodbye?

Key to the debate over the economic logic of keeping the games in Kyrgyzstan has been their potential to boost tourism revenues, which are difficult to calculate.

Using figures from 2016, local news outlet Kaktus Media estimated that the government spent $500 for every foreign tourist that attended the games and up to $750 if road repairs were taken into account.

Of the tourists that spoke to Eurasianet, some – like a Dutch couple touring the country in a classic Russian mini-van – were squeezing the event into pre-planned trips.

Others had come specially for the event, like Australian Brenton Earl, who was attracted to photos from the 2016 Games.

“I thought that it looked like a beautiful place to be with a bunch of weird sports I don’t know the rules for,” Earl told Eurasianet.

Speaking at the Turkic Council meeting on September 3, Kyrgyz President Sooronbai Jeenbekov implored his counterparts to support the games’ future amid competition from “alternatives.”

One media outlet suggested he may have been referencing Kazakh plans to hold its own “ethno games” in 2021.

If this third Kyrgyz Nomad Games lacked anything compared with the last edition, it was the dubious presence of Hollywood actor Steven Seagal.

Seagal was an honored guest for the 2016 Games, where he even donned medieval dress.

But the B-lister possibly tied his sail too tight to the mast of a now-jailed former prime minister – a key rival of Jeenbekov’s – to earn an invite this time round.

Nicholas Muller is an American photojournalist and writer covering the post-Soviet space. Chris Rickleton is a journalist based in Almaty.