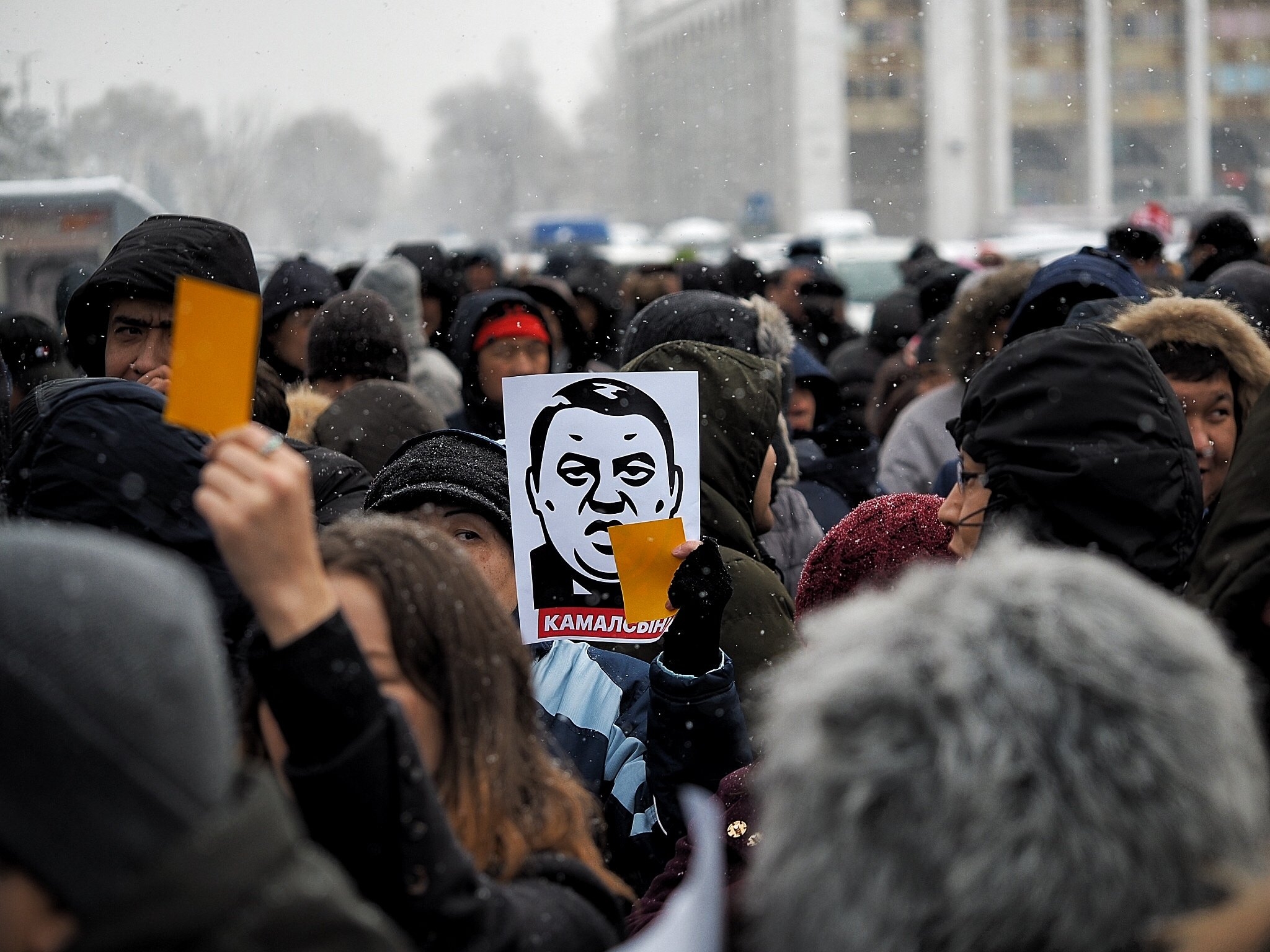 Hundreds of people ventured out into freezing conditions in Kyrgyzstan’s capital on November 25 to demand an investigation into years of corruption allegedly perpetrated by senior government officials.

The 90-minute rally, which was held on the main central square in Bishkek and proceeded without incident despite not having been officially authorized, was pointedly framed as an apolitical event that would not promote the cause of specific parties and movements.

Frustration has been simmering in Kyrgyzstan in the wake of the publication last week of an explosive journalistic investigation by the Organized Crime and Corruption Reporting Project, or OCCRP, in cooperation with RFE/RL’s Kyrgyz service and Bishkek-based news website Kloop. The joint report expanded in detail on previously vague allegations about the ways in which customs service officials have turned a blind eye as multibillion-dollar smuggling operations have defrauded the Kyrgyz state of vast amounts of revenue.

Much of the ire has been directed at the figure of Rayimbek Matraimov, a former State Customs Service deputy head widely viewed as one of Kyrgyzstan’s most powerful men.

Shirin Aitmatova, a former member of parliament, has led the charge in urging the authorities to investigate how Matraimov has managed, despite working almost solely in government service, to accumulate his riches.

As she told Eurasianet, the protest in Bishkek was intended to be a show of the public’s power, not a traditional political demonstration with grandstanding orators.

“It was a rally against corruption, not to overthrow the government. The people that came were mostly urban residents,” Aitmatova said.

Much of the clamor that occurred after last week’s report had been confined to social media, and it was not clear ahead of the rally whether that online activism would translate into a physical presence on the square. The robust turnout appears to have dispelled those anxieties.

“This is important because it has been a long time since city folk have got involved in political rallies,” Aitmatova said. “Usually, people at rallies come in from the regions and are paid to take part. And this time, everybody came to fight for their rights, and nobody paid anybody. This is a new format for Kyrgyzstan.”

Commenting on the demonstration on Twitter, U.S.-based scholar Erica Marat, who is from Kyrgyzstan, echoed Aitmatova’s remarks in describing the event as a departure from custom.

“This is what peaceful resistance against corrupt government looks like in Central Asia. No signs of provocateurs, no arrests, and a self-organized public demanding fairness and representation,” Marat wrote on Twitter.

Professional politicians were notable for their absence. The only member of parliament who appears to have attended was Dastan Bekeshev.

“Today’s rally was a signal that the fight against corruption must happen,” Bekeshev said. “It is no matter whether we are talking about [former President Almazbek] Atambayev or Matraimov. If you stole money, you go to jail.”

While civil society sees graft as a critical problem to be tackled with urgency, President Sooronbai Jeenbekov indicated in remarks ahead of the rally that he views the question as a complex puzzle to be grappled with over the long-term.

“Everybody supports the fight against corruption, but in reality it plays out quite differently,” Jeenbekov told Kabar state news agency. “Our population is about 6.5 million, and when you inquire, you find out that everybody is somebody’s brother, in-law or somehow related. And when any official is suspected of corruption, some relative will quickly turn up to defend them.”

Jeenbekov described the need for the “purge of state bodies charged with fighting corruption” as a priority.

“This means the justice system, the procuracy, the police, the finance police, the audit chamber and others,” he said.

As a report prepared by the Washington-based Carnegie Endowment for International Peace found in June 2016: “The consensus among civil society activists from Kyrgyzstan is that the new dispensation has done little to change prior corrupt practices, including electoral fraud, shakedowns for basic public services, and physical intimidation of regime critics.”

“Transnational criminal organizations continue to prosper, trafficking drugs and other types of contraband across the country’s borders, and official anticorruption efforts are often criticized as window dressing or politically motivated,” the author stated in the report, which was published in the year before Atambayev left office.

Jeenbekov’s critics contend that little has changed on this front since he took office in November 2017.

The reenergized activism around anticorruption themes owes much to the focus on one individual, Matraimov, the former deputy head of the State Customs Service. Such is his notoriety that he has earned the derisive moniker “Rayim Million,” a reference to the riches he is purported to have amassed by taking kickbacks from smugglers.

Many of those attending the Bishkek rally held up posters calling out Matraimov specifically. Shortly after the demonstration began, the few hundred people that had assembled broke into chants of “power to the people” and “jail Rayim!”

The State Customs Service, however, denies it has a problem at all.

“There has never been any smuggling at the customs,” Zhamanak Musurkanov, a spokesman for the service, was quoted as saying last week by 24.kg news agency.

Dinara Oshurahunova, a veteran civil society activist, hailed what she described as the exemplary behavior of the rally participants and urged the authorities to do their bit.

“This is just the beginning,” she wrote in a Facebook post. “We will monitor what the government does next. And if they have no reaction and just do nothing, we will gather once more.”