Kyrgyzstan: In an uprising low on heroes, defense volunteers shine

The appearance of the self-defense units is the second time this year that civil society has been forced to hold the line. Where the state repeatedly fails to live up to its obligations, volunteers step in. 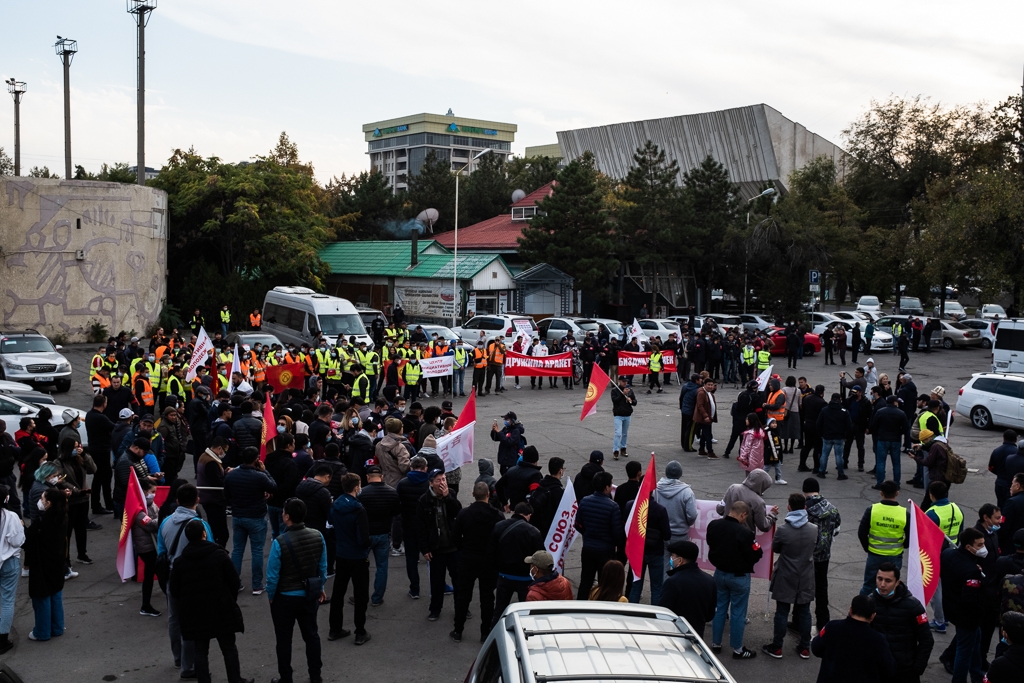 Different groups of druzhinniki muster in central Bishkek. (all photos by Danil Usmanov)

Few are coming out of Kyrgyzstan’s turbulent political crisis with much credit to their name.

One exception are the druzhinniki. It is these volunteer civil defense units that stood guard around the capital, Bishkek, as disarray unfurled following the protesting and rioting that succeeded the October 4 parliamentary elections.

“We are not bandits, we are not political players, we are the people, and we will not let the people’s work and property and businesses be destroyed,” Ildar Sadykov, the coordinator of the union of people’s civil defense units, told Eurasianet. “There are already 10,000 of us.” 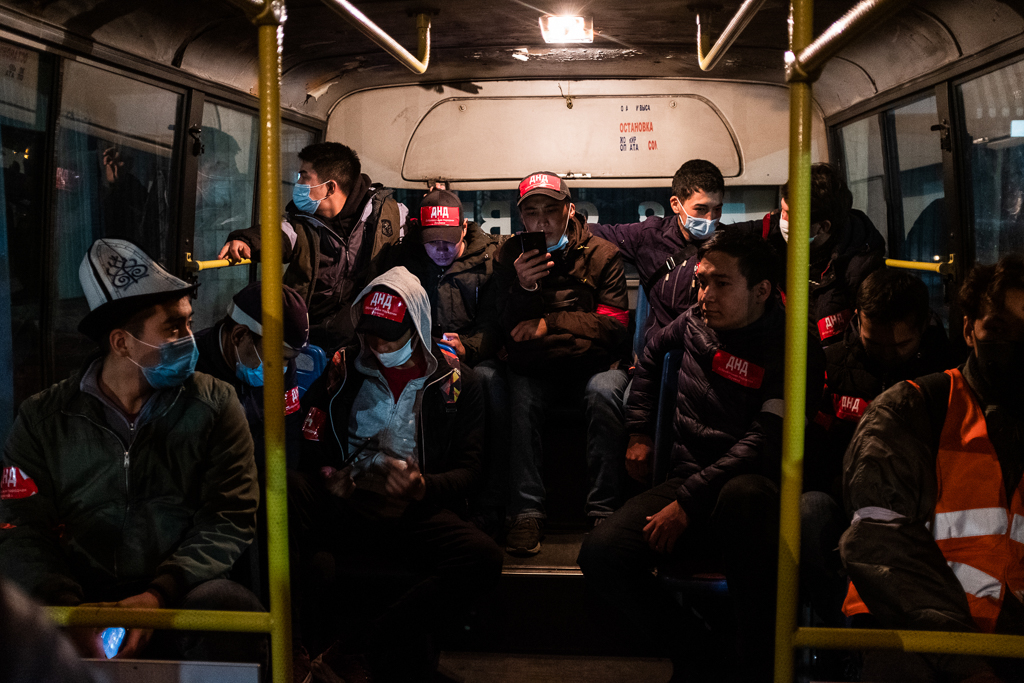 This is not the first time the druzhinniki have appeared on Kyrgyzstan’s streets. Similar formations were created in the wake of uprisings in 2005 and 2010, which were also accompanied by outburst of looting of shops and cafes. But on this occasion, the defense brigades self-organized with remarkable rapidity and helped avoid a repeat of what happened in those years.

It was not just businesses that needed to be protected – there were also government buildings to keep in mind. A lot of the tussles for power that have played out among rival political formations over the past nearly 10 days have centered on individual buildings, such as the Government House. The nearby White House, which normally doubles up as a parliament and the base of the presidential administration, has been rendered unusable after it was targeted by rioters on the night of October 5. 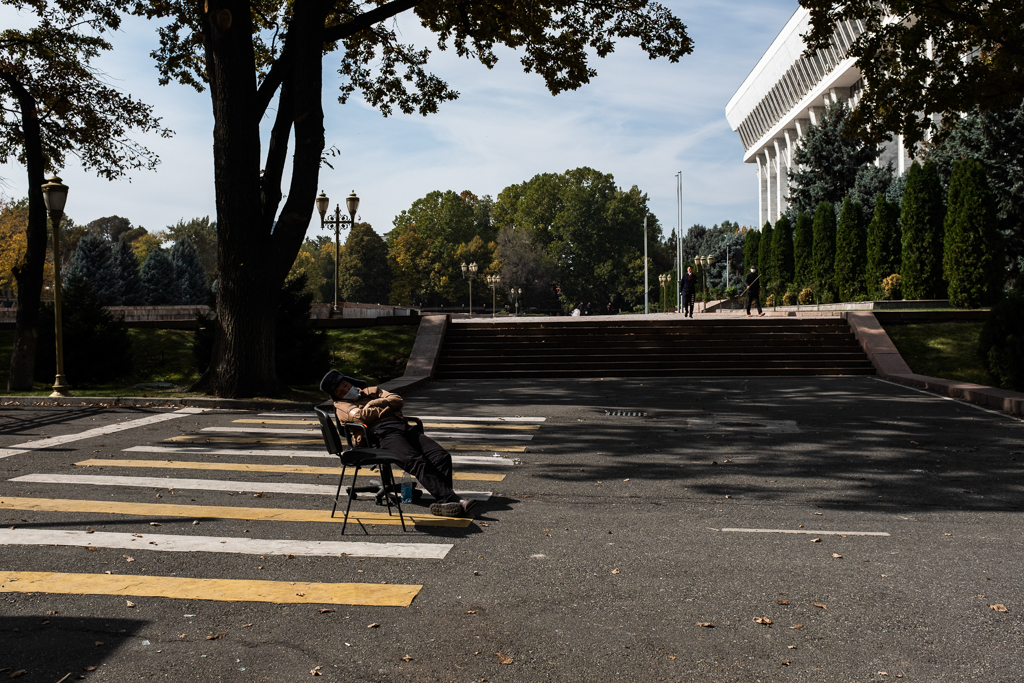 The druzhinniki played a curious role on October 7, when a group of MPs convened at a mid-range hotel in Bishkek to discuss the nomination of a politician called Sadyr Japarov as prime minister. Hundreds of unruly Japarov supporters congregated around the hotel and at times made attempts to force their way into the building, paying little heed to appeals to desist. It was only by dint of the volunteers’ efforts that this effort was quashed.

On the same evening, a large mob repeatedly tried to march on the state residence, which is the official abode of the president, but were thwarted every time by human chains of druzhinniki.

Other premises that got the same protection included the headquarters of the State Committee for National Security, city hall and the building of the Public Television and Radio Broadcasting Corporation, known by the acronym OTRK. Shifts routinely lasted through the increasingly chilly nights.

“This night was not calm,” one volunteer called Urmat Nasykulov wrote on his Facebook account on the morning of October 7. “But even though were frozen through to our bones, we were able to protect and preserve our city. Let me thank all druzhinniki for their courage and spirit. Together we are strong.” 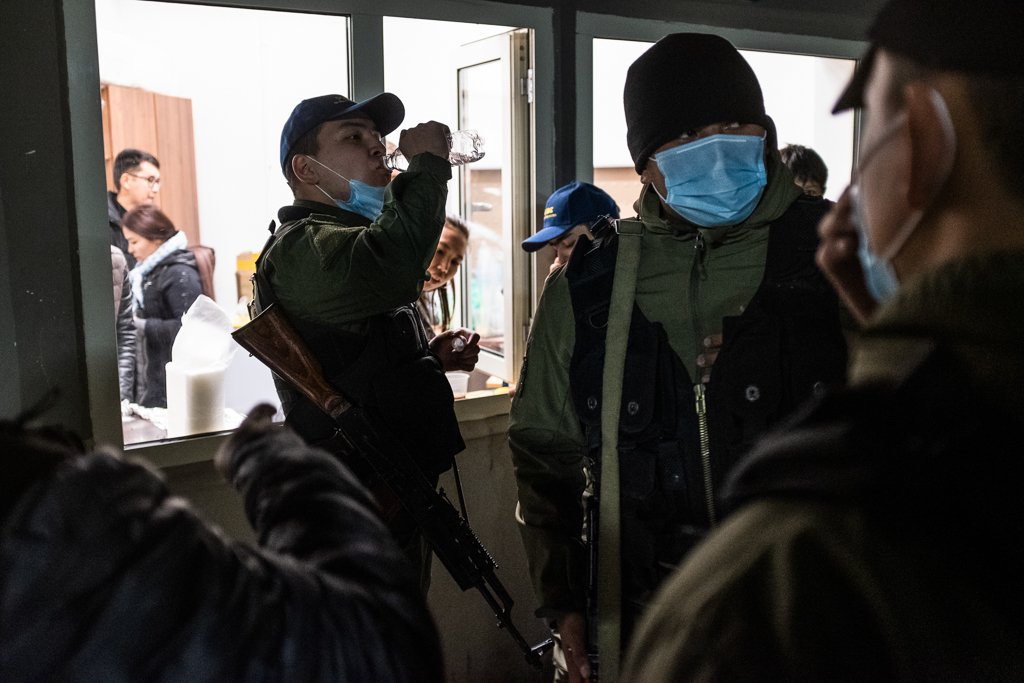 The appearance of the self-defense units is the second time this year that civil society has been forced to hold the line. Where the state repeatedly fails to live up to its obligations, volunteers step in.

When the first wave of the coronavirus outbreak struck in the spring, volunteer groups appeared to assist doctors by making deliveries of medical materials, providing food, and manning drop-in health centers. In many cases, volunteers even transported patients to hospital or provided basic treatment.

Sadykov said the problem was that the men in the crowds of attackers were typically young people under the sway of malign actors.

“Somebody buys them vodka, gives them money, tells them stories about how everybody is bad. Unfortunately, we are talking about mainly children from the ages of 16 to 19 who are susceptible to verbal persuasion,” he said. “When we see the drunks, we talk to them, try and reason with them and get them to go home.” 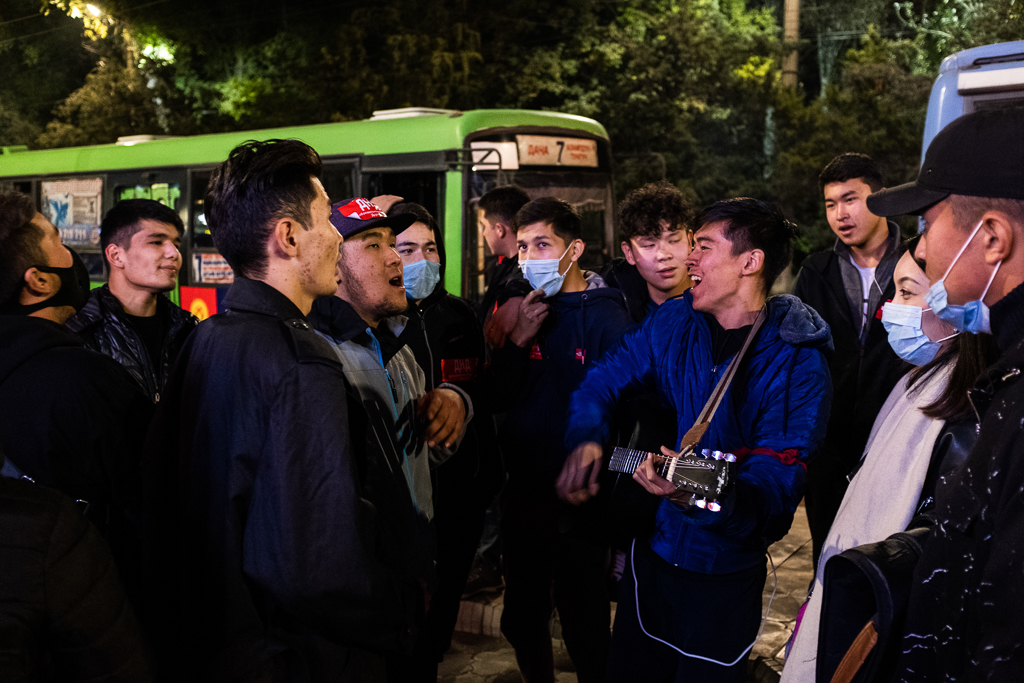 Sadykov said the volunteer defense groups have rejected the overtures of politicians who have tried to bring them onto their side. They have relied for basic support on the general public.

“Regular people give us food. Somebody brings us a couple of portions of manty, another brings a kilo of pelmeni, and another still brings 10, 100 or even 300 portions of plov. People do this willingly, we don’t make anybody do this or make a single phone call,” he said. “The guys made their own vests, which they put [identifying] labels on.” 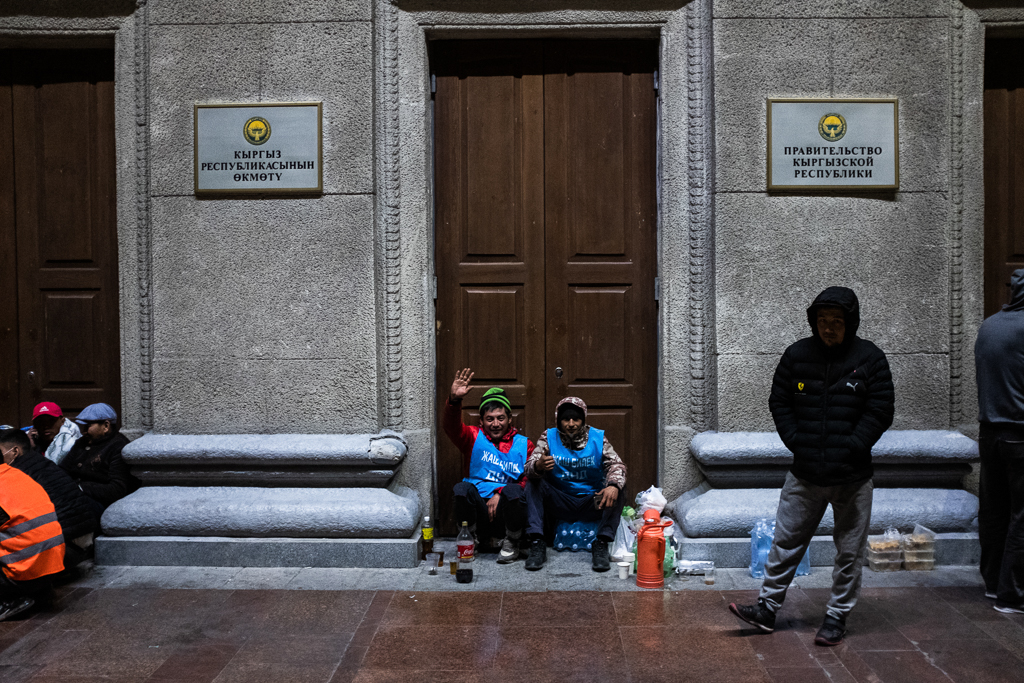 As identifying signs went, the defense units went through a variety of iterations. Initially, they simply donned simple, white armbands. In a few days, many of them had adopted more formal-looking armbands carrying the initials DND – standing for Dobrovolnaya Narodnaya Druzhina, or people’s voluntary defense brigade. 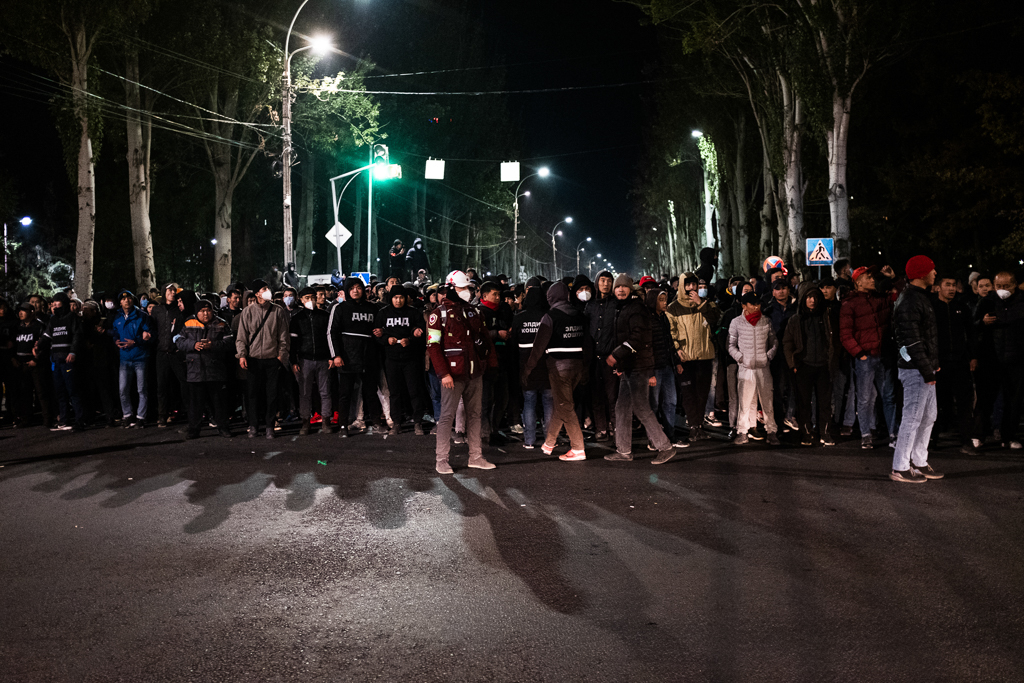 Such was the success of the voluntary scheme that as days passed, the various self-formed groups organizing the units had to start being more careful about who they enrolled.

“Initially, to become a druzhinnik, you just had to be a member of one of the group chats, but then provocateurs appeared. A businessman offered us his gym, where we opened an office and began to register the druzhinniki with their passport details and phone number,” Sadykov said. 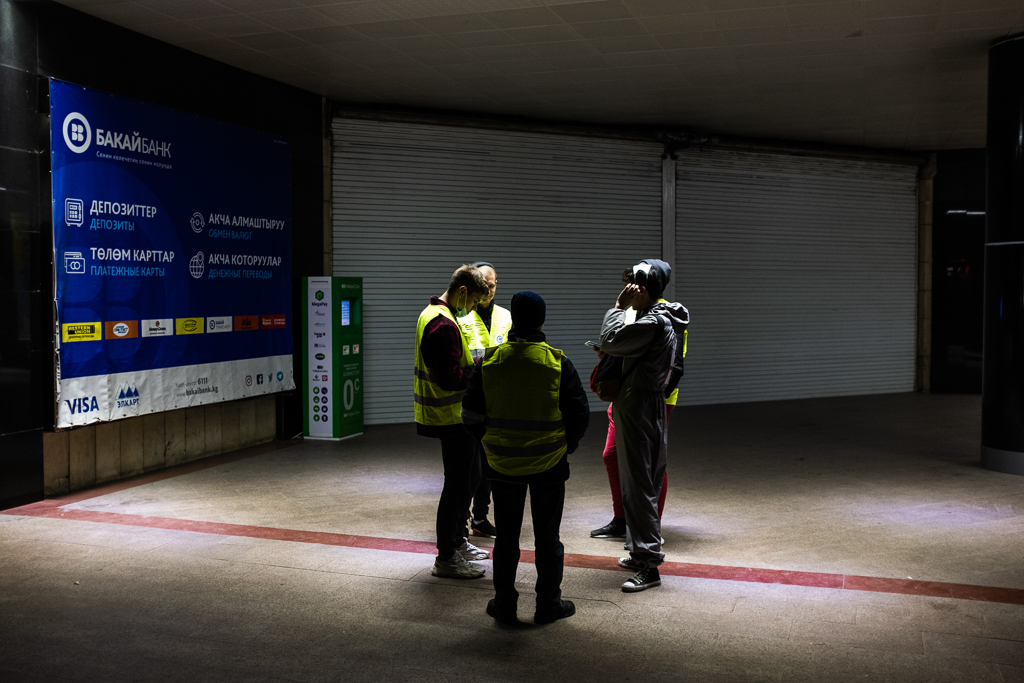 Some members were themselves business owners. One 24-year-old owner of a private cinema club on October 6-7 joined the units guarding the Vefa shopping center, which is near his own business.

“It is easy to vandalize small businesses, because all they have [for protection] is glass windows. One rock and that’s it,” he told Eurasianet, asking that his name not be published.

The cinema club owner admitted that his peers did sometimes overdo it, either by acting too aggressively or taking too many liberties with their self-assumed powers.

“They really went too far when they started stopping cars without plates and checking their trunks, but overall, basically everything was fine,” he said.