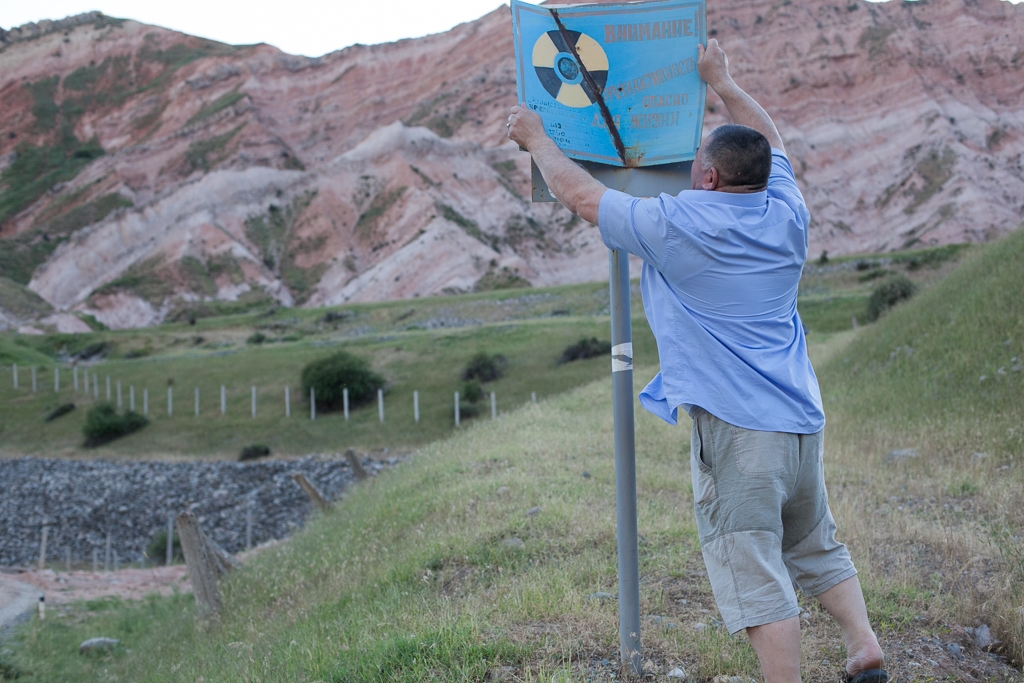 An official with Kyrgyzstan’s Ministry of Emergency Situations fixes a rusting sign warning locals to stay off the tailings dumpsite. (Photo: David Trilling)

In a pharmacy on the ground floor of Mailuu-Suu’s central hospital, Ainagul Parpibaeva draws a hand across her throat to gesture “enough.”

“We’re full of illness. Many people have cancer, leukemia. I think this is because of the uranium, but the government never tells us anything,” says the 36-year-old pharmacist. She adds that people come to her complaining of the same ailments over and over, “like children who are nauseous and vomit.”

Everyone in this Soviet-era mining town in southern Kyrgyzstan seems to have a tale of recent loss, often cancer-related. Mailuu-Suu was once closed to outsiders, with workers getting handsome salaries to perform dangerous work. They produced 10,000 metric tons of U3O8, or yellowcake, between 1946 and 1967, providing the fuel for the Soviet Union’s first nuclear weapons and atomic energy plants. They also buried millions of tons of waste along the river.

Workers’ well-being was not a priority. “Production targets usually took precedent [sic] over environmental, health and safety standards,” the International Atomic Energy Agency said in a 2010 report. Since the Soviet collapse there has been little monitoring or maintenance. The IAEA describes Mailuu-Suu as in urgent need of a cleanup. In 2006, the Blacksmith Institute, an environmental watchdog in New York, included Mailuu-Suu on its list of the world’s 10 most polluted places.

Radiation and radon gas are big concerns. Even more troubling, the waste is full of carcinogenic heavy metals – uranium, but also cadmium, arsenic and others – that have entered the drinking water.

Mailuu-Suu is only one of seven sites scattered around Kyrgyzstan with radioactive dumps containing “tailings” – waste from milling uranium ore. More lie in neighboring Uzbekistan and Tajikistan, which have done even less to address the dangers and educate their populations, according to international assessments. Overall, government figures indicate Kyrgyzstan is home to 92 hazardous dumps containing 254 million cubic meters, or 475 million tons, of waste (not only uranium tailings), often alongside rivers.

Many of those rivers, like the one running through Mailuu-Suu, flow into the fertile Ferghana Valley, home to about 10 million people. For foreign aid officials, the bigger threat is not the local public health hazards, which have been poorly studied, but the risk of wider contamination.

In 2002, a landslide blocked the river here. The rising waters threatened to inundate one of the tailings dumps and wash the metals 15 miles downstream to the Fergana Valley. According to some studies, this has happened with local hazardous waste about once a decade during the second half of the 20th century.

“Some of the protective dams [surrounding tailings] built by the Soviets are in very bad condition,” says Damir Kushbakov, the top official for tailings at Kyrgyzstan’s Ministry of Emergency Situations (MChS).

Kushbakov says resources are limited to implement preventative measures. His modest budget funds only the most urgent repairs to tailings dams that are slipping into the river. His office spends much of its money refilling holes where locals have scavenged for metals.

In conversations with dozens of locals, few seem aware of the invisible threat – though officials insist they organize education campaigns and teach children to stay away from the tailings. “Even in the hospital they don’t give you information or tell you not to go there [to the dumps] or about related health problems,” says Chinara Sarieva, a 35-year-old cradling a baby on a porch downtown.

A bright-eyed girl of 12 is surprised when asked if her teachers have ever warned of the tailings: “No, why?”

Standing atop an unmarked tailings dump – the fence was looted long ago – Kanybek Kydyrov of the Ministry of Emergency Situations says uranium is leaking into the river a few feet away. Behind him, a shepherd leads his goats across the radioactive pile. A few kilometers downstream, boys fish with nets.

Local doctors are uneasy discussing the risks. One claims the high frequency of uterine cancer in Mailuu-Suu is because local women have too little sex. (The Swedish Institute of Environmental Medicine has found a statistically significant link between cadmium, a heavy metal present in Mailuu-Suu’s water, and increased risk of uterine cancer).

The deputy director of the city’s main hospital, Okumzhan Maksutaliev, confirms he has seen a rise in cancers in recent years, but insists there is nothing special about Mailuu-Suu. “There are increasing cases of cancer all over the world,” he claimed.

In December 2013, in a non-binding resolution, the United Nations General Assembly called on the international community to assist Central Asian states with the cleanup. Over the decades since Kyrgyzstan’s independence, the European Union, the UN, the European Bank for Reconstruction and Development, and other donors have spent millions on various assessments. Local officials complain progress is slow.

Conspiracy theories are catalyzed by a lack of information, combined with pervasive concerns about corruption among a population accustomed to receiving little support from the state. “People say that the authorities get extra payments for the dangers and that we should get this too, but we don’t, so they probably just put it in their pockets,” says Parpibaeva, the pharmacist. Ira Sarieva, 58, who sells women’s clothing to augment her pension, echoed such suspicions, voicing a belief that officials have pocketed foreign assistance earmarked for cleanup.

Both officials and donors consider one pilot project a success. Between 2010 and 2012, a World Bank-led venture moved one of the most accident-prone of Mailuu-Suu’s 23 tailings dumps to safer ground and reburied it. That cost $8.4 million. Moving the remaining highest-risk tailings in town would cost $50 million, the Ministry of Emergency Situations estimates. Others put the number several times higher.

Some locals are opposed to moving the tailings, motivated, in part, by lack of information and lack of trust.

Jumakan Bekbaeva, a 63-year-old widow who cares for most of her nine grandchildren because her children are working in Russia, says her 8-year-old granddaughter became sick with thrombocytopenia – a shortage of blood platelets – shortly after the World Bank project ended.

“It was because of the uranium, because they uncovered the tailings,” says Bekbaeva. “Everyone here associates any death with the mining. After the tailings were opened [to move them], many people died. People believe this, but our doctors won’t admit it.”