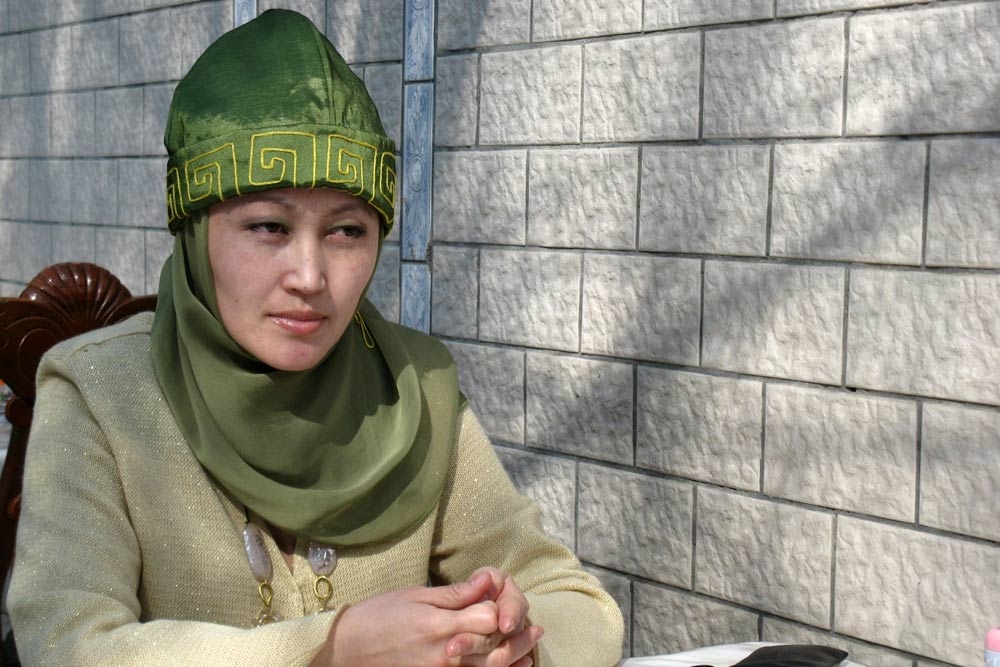 Mars Doornbaeva, a well-known TV presenter, quit because her supervisor prohibited her from wearing the hijab. (Photo: Hamid Tursunov)

Recent political changes in Kyrgyzstan have not tempered a brewing social and cultural quandary in southern provinces. An increasing number of citizens of the South are becoming practicing Muslims. For working women in particular this is creating a dilemma, forcing some to choose between their faith and their careers.

In March, Mars Dooronova, a well-known TV presenter and producer with Osh’s popular ELTR station, quit because her supervisor, the station’s former deputy director, Mametibraim Janybekov, prohibited her from wearing a hijab, or traditional Muslim head covering, in the office and on air.

"I got married [recently] and now that I am a married woman I have started wearing a hijab, but Mametibraim Janybekov said I can’t wear a hijab on the air, and even within the building [of the TV Company]," 31-year-old Dooronova told EurasiaNet.org shortly after she resigned. Citing the Koran, she said, "I have been praying for five years and I cannot wear open T-shirts or mini-skirts. I prefer a hijab."

Janybekov offered Dooronova a compromise, saying that she could come to work in a hijab and change her clothes in the office while she was at work. She rejected the deal.

"I can’t be double-faced. I can deceive people, but I can’t deceive Allah. If I couldn’t be on the air in my hijab and even in the office, how could I work there? This is why I had to resign," said the presenter, who had worked at the station for 11 years.

ELTR, the second biggest national broadcaster, is an Osh-based Kyrgyz-language public TV station. Though the station is now under new leadership following the April 7 uprising that forced President Kurmanbek Bakiyev out of office, the cultural clash is not receding.

"Nobody forced this lady to resign. We did not allow her to wear a hijab on the air and in the office," Janybekov told EurasiaNet.org while he still held the deputy director’s post. "We are considered a state organization. We are not an Islamic republic. There is a certain etiquette concerning dress. Wearing a hijab is not allowed according to our dress code. Outside, she can wear whatever she wants."

Since the collapse of the Soviet Union, Islamic worship has been on the rise, especially in Central Asia’s Ferghana Valley, where Osh is located. Religious leaders call on the faithful to observe Islamic law, saying the practice will improve the moral makeup of the country.

"Wearing a hijab is a precept of Allah, and a Muslim must accept it without questioning whether it is wrong or right," Makhmud Aripov, the imam of the Nabijon Haji Mosque in Osh, told EurasiaNet.org. "Wearing a hijab secures a woman’s chastity, and a lack of hijabs results in divorces. A mother wearing a hijab serves an example for her daughter, which will help secure her honor."

A growing number of hijab-related conflicts may be going unreported, one expert warned. "There are many similar conflicts, which are not reported by the mass media, or by civil society organizations. At present, such incidents, which are more common at secondary schools when senior female students wear hijabs, are becoming a tendency," said Kadyr Malikov, the director of the independent analytical research center Religion, Law and Politics and a respected authority on Islam in Kyrgyzstan.

Malikov sees a growing tension between people who prefer a secular life and adherents of Islam. "State officials do not understand what a secular state and a religion mean. In Kyrgyzstan, 80 percent of people are Muslims; this is the biggest confession. Unfortunately, as such incidents and misunderstanding grow, they will be perceived by believers as a hostile [government] attitude towards Islam. The feelings of believers and the secular laws should be harmonized," said Malikov. He described the informal ban on wearing a hijab in the workplace as a "violation of a Kyrgyz citizen’s constitution rights."

Hijabs nevertheless make many Kyrgyz feel uneasy. Mirroring arguments in Turkey, opponents worry that Kyrgyzstan’s secular foundation is coming under threat. Journalist Odiljan Obidov, who for 27 years was editor-in-chief of ’Lenin Yoli’ [Road of Lenin], a leading Osh Province newspaper during the Soviet era, opposes women wearing a hijab. "I have been to [Middle Eastern, predominantly Muslim countries], and I haven’t see women wearing hijabs. People, having come back from some Arabian countries, start wearing hijabs, but even in many Arabian countries women do not cover themselves. I have a big family and many granddaughters, and none of our girls or women like the idea of wearing a hijab," he told said, adding, "The promotion of hijabs is not good for this country."

Without some sort of compromise, there would seem to be a potential for conflict. "This year the school principal told us, teachers wearing hijabs, not to wear them when we come to work," S.N., a 31-year-old history teacher based in Osh, who asked to be identified only by her initials, told EurasiaNet.org.

"Out of 14 teachers, 10 decided to follow [the principal’s] instructions, but three colleagues and I refused to do so. My husband advised me to ask for a written instruction from the principal so that we could take her to the court, but she did not do that. So meanwhile, I am still teaching."

S.N., a mother of two, said she would quit her job before appearing in public without a hijab.

Hamid Tursunov is a journalist based in Osh.