Kyrgyzstan: Inside the Burgeoning Rap Scene 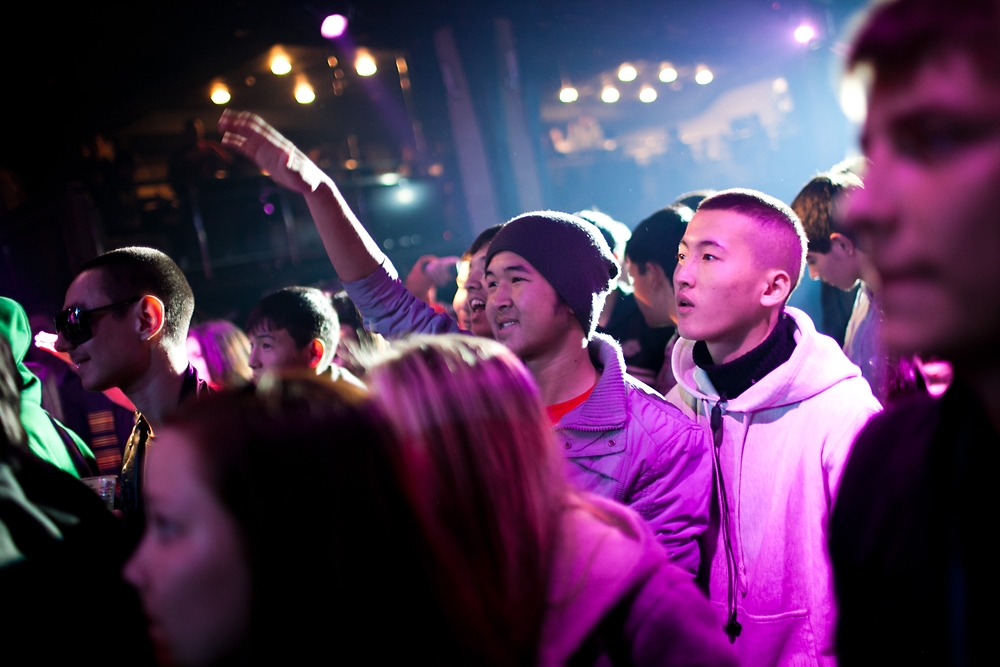 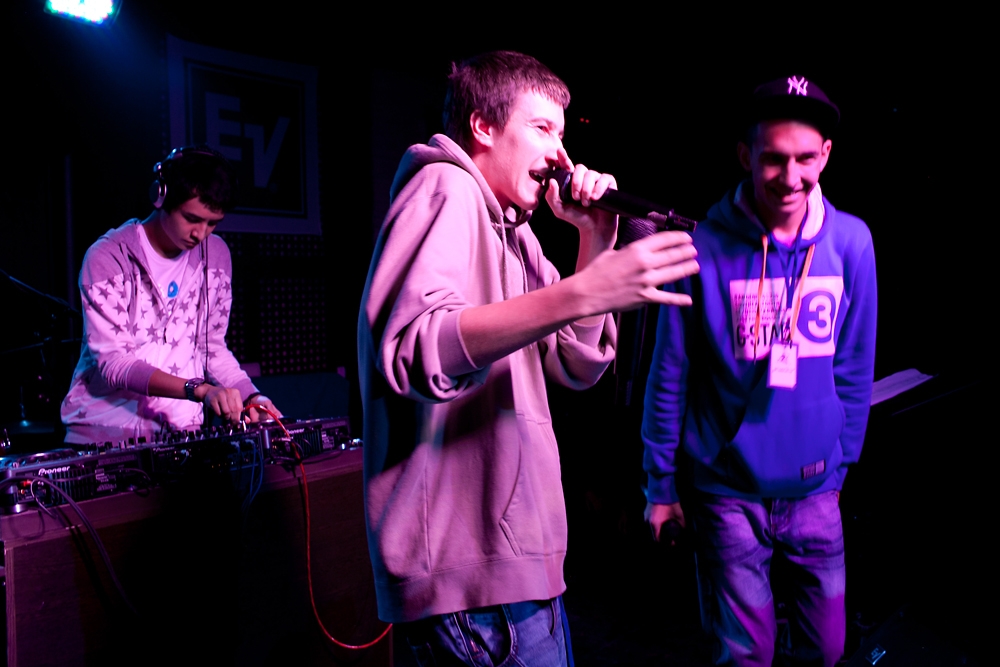 Performing in Russian, 16 contestants rap-battle for three hours to decide who will be crowned king. 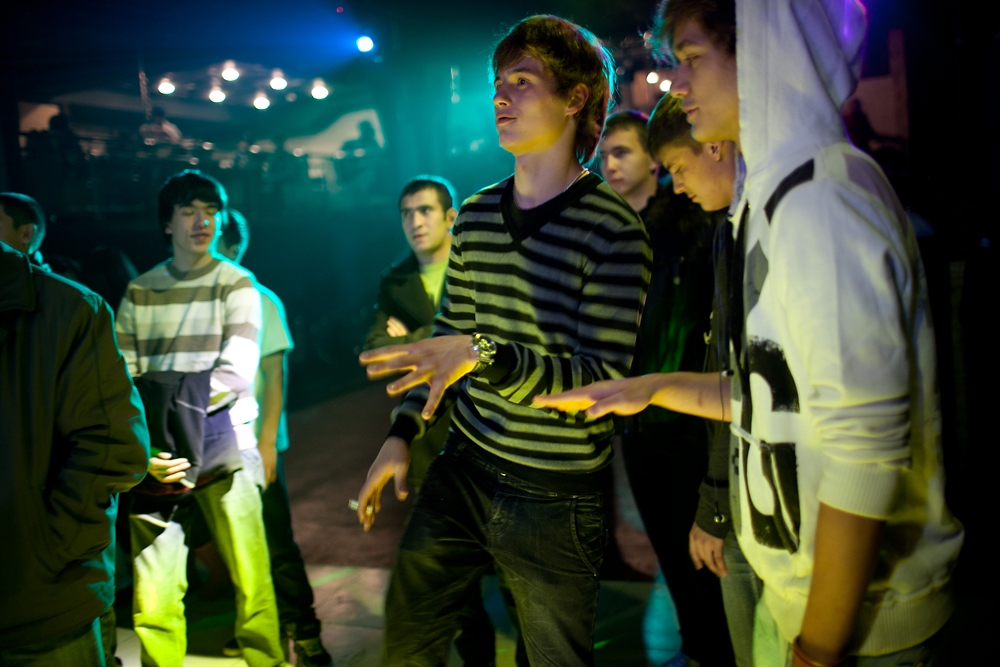 The nearly 200 paying patrons are almost all teenagers. 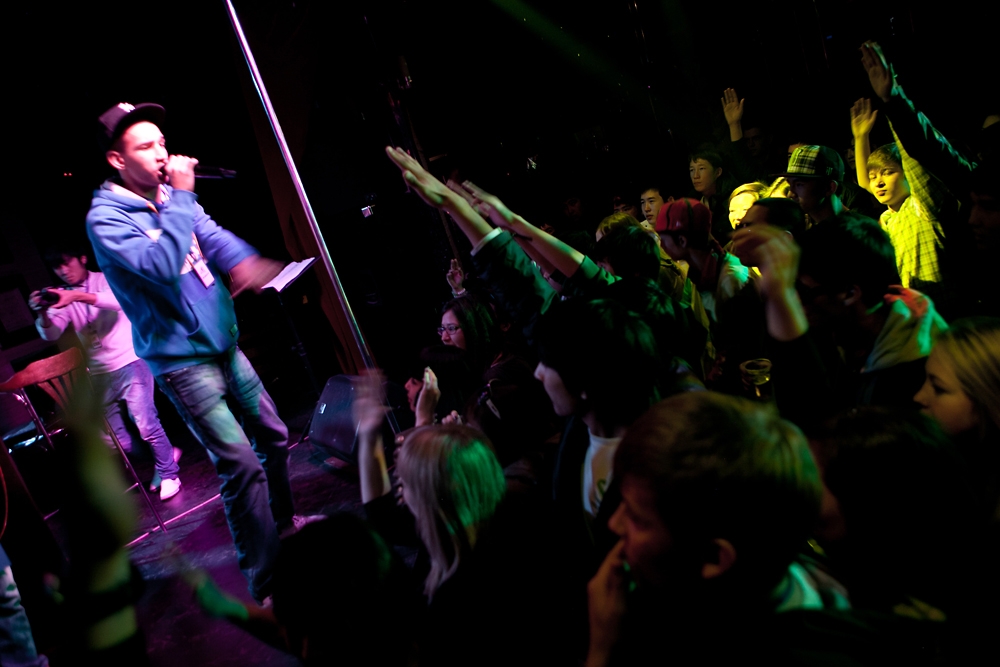 Politically, the views expressed at the Freestyle League are middle-of-the-road for Kyrgyzstan. 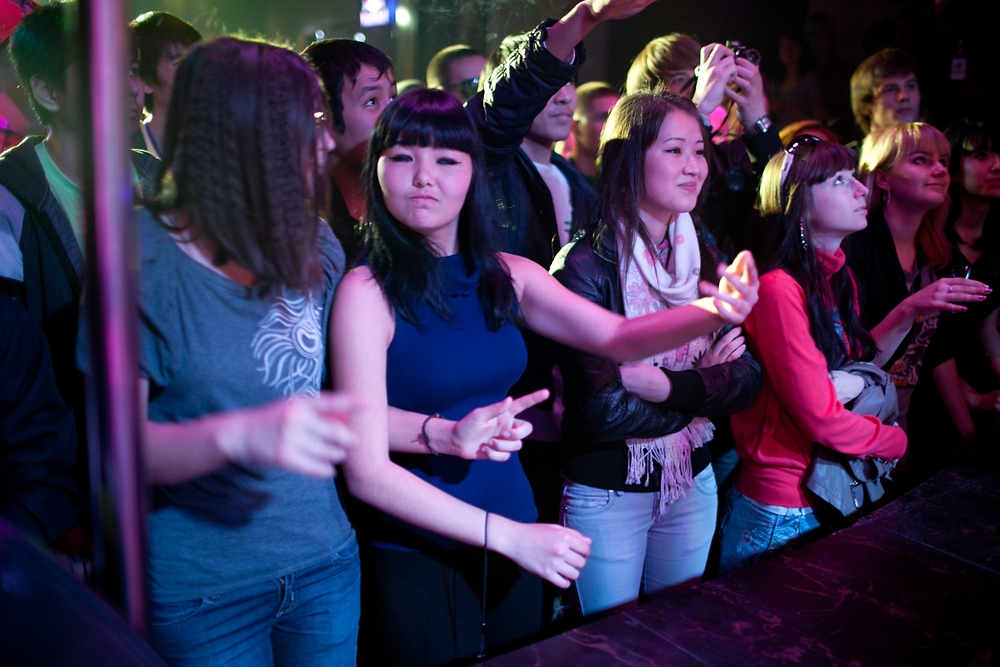 The young crowd is a mix of Kyrgyz and ethnic Russians. 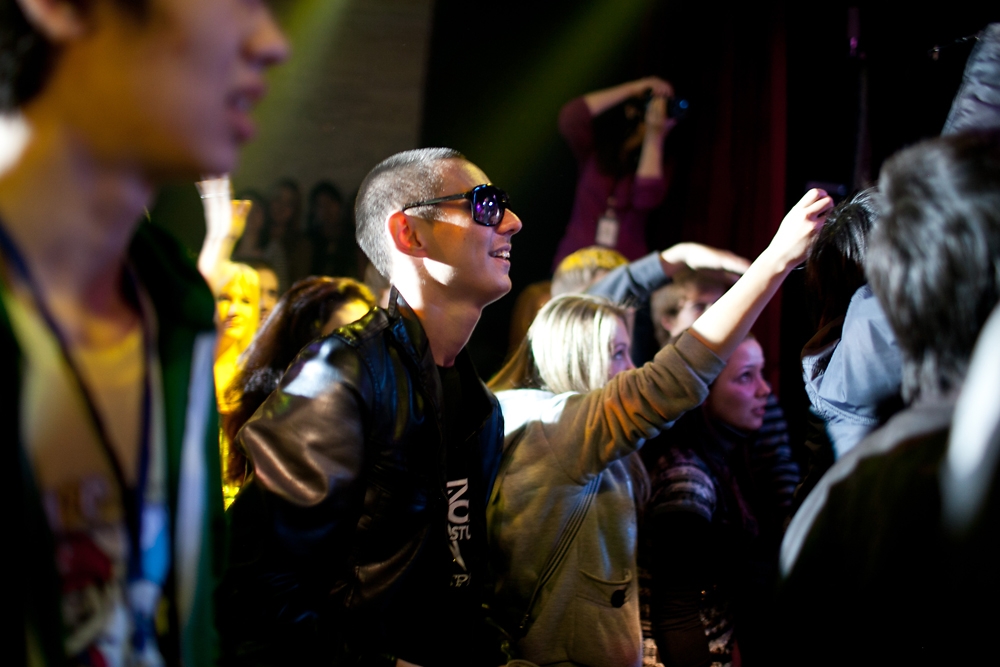 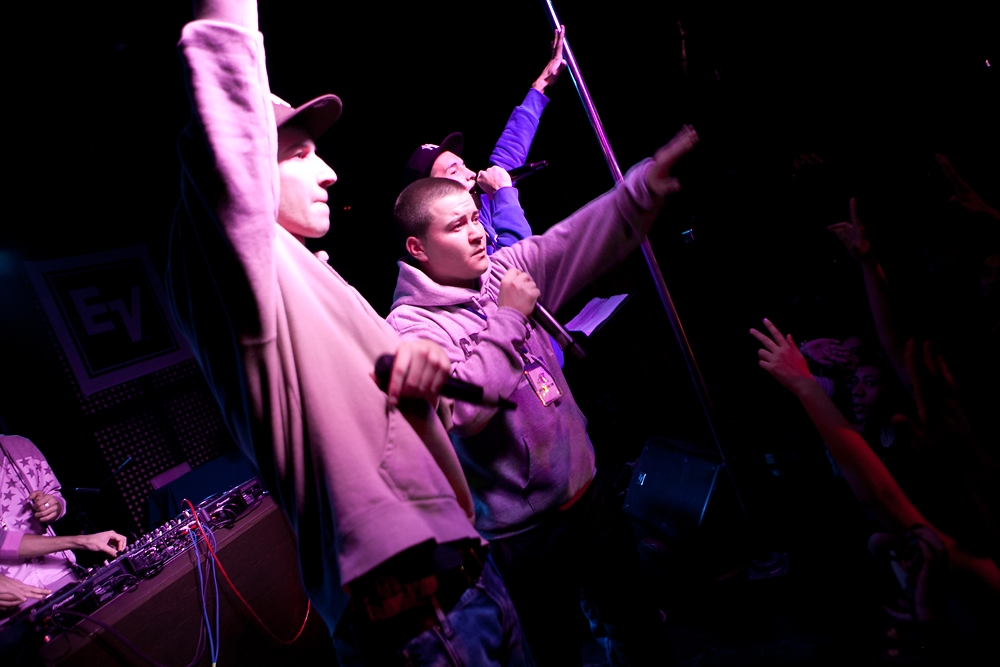 “Put your hands in the air! We want to hear maximum noise!” some of the rappers shout. 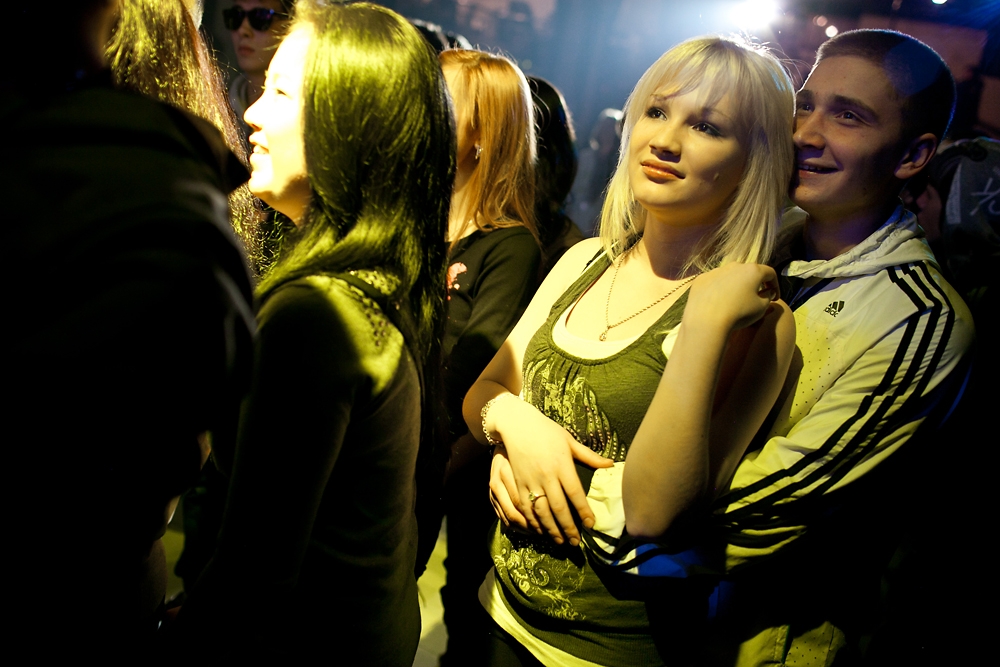 Although rap and hip-hop in Kyrgyzstan is marginal next to pop ballads, a vibrant scene is growing. 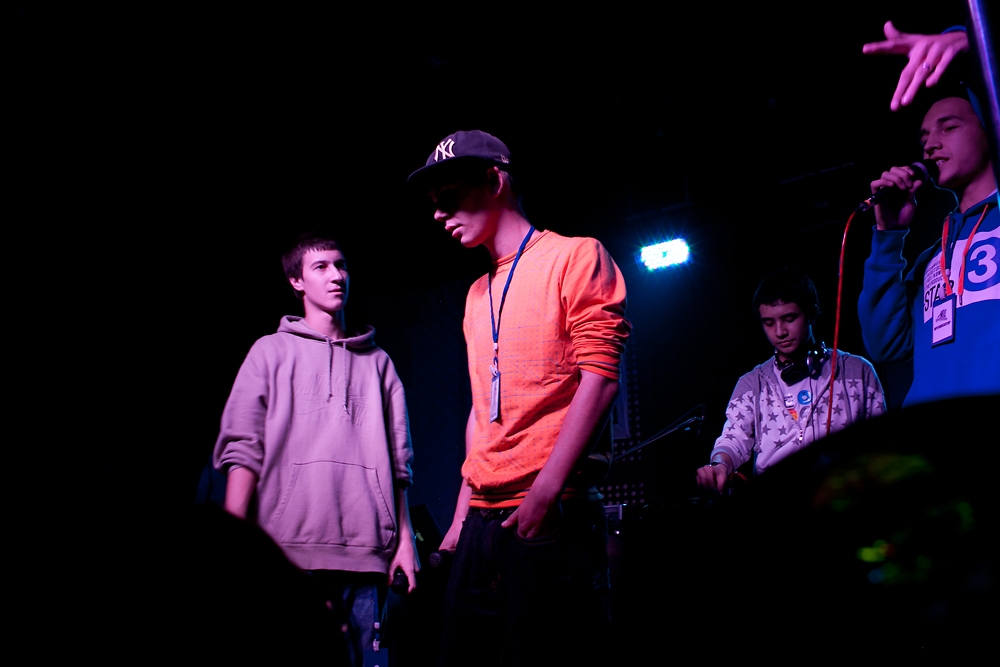 Kyrgyz-language rappers are a minority, but some drop rhymes in the state language. 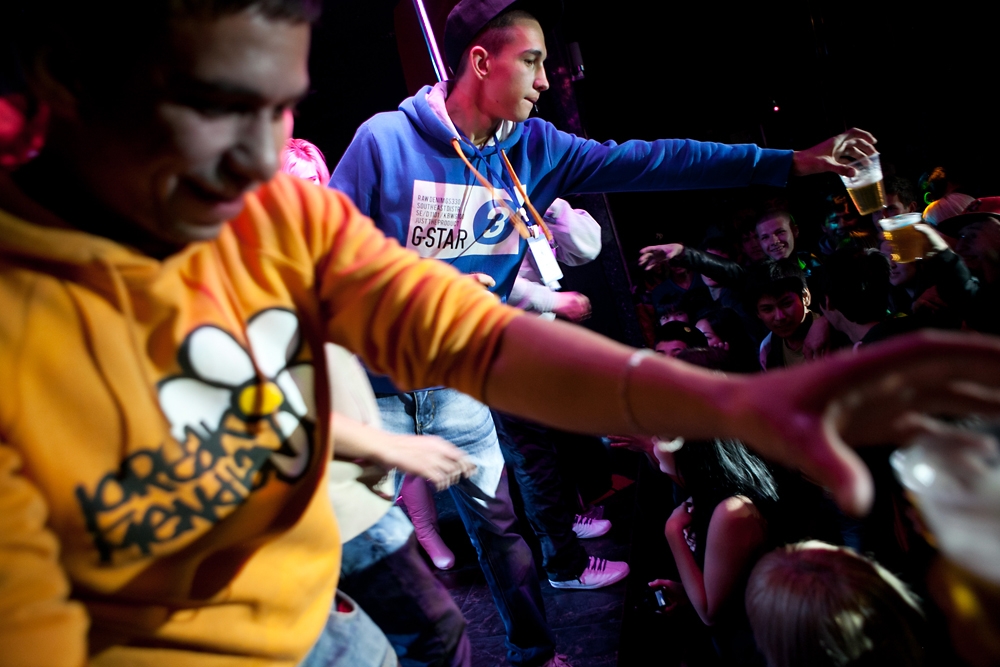 Organizers of the Freestyle League hand out beer to rap fans. 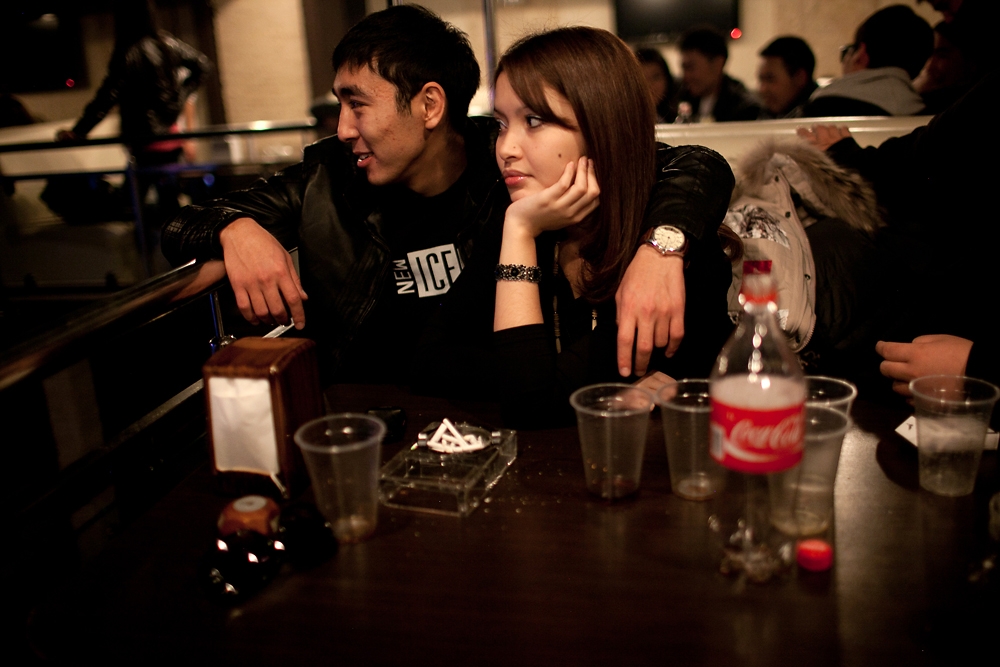 At 22, Kadyrov - also known as L'zeep - is one of the self-described "dinosaurs" of the Kyrgyzstan rap scene.
prev
next

Two skinny teenagers in oversized sweatshirts bound onto stage, each in matching New York Yankees caps, nodding their heads in time as they call to the crowd: “Put your hands in the air! We want to hear maximum noise!”

On a recent Sunday afternoon, nearly 200 paying patrons, almost all teenagers, packed into a small nightclub in central Bishkek for the city’s first-ever “Freestyle League” competition. Performing in Russian, 16 contestants rap-battle for three hours to decide who will be crowned king.

Although rap and hip-hop in Kyrgyzstan may still be marginal next to pop ballads and dance tunes, a vibrant scene is growing in the capital.

“It’s a parody of what people are doing on television in the West: ‘Oh, we’re in a club, we’re so cool,” said a member of LeeMitT, a local group, describing Freestyle League.

“People think hip-hop is all drinking and smoking, clubs and girls. We’re trying to draw in people who have a more mature view on life,” said Artyom Chernetsov, the event’s organizer.

“Of course we listen to American rap,” said Meder Kadyrov, also known as L’zeep, who, at 22, is one of the self-described “dinosaurs” of the scene and a judge at the Freestyle League. “We hear all about gangsters and violence. I love 2Pac. But in Kyrgyzstan we have a different kind of situation, and a different kind of people. We can’t afford to spend $10,000 in a club. Well, some can, but they’re all the children of chinovniki [bureaucrats]. The rest of us work. We have different values.”

Politically, the views expressed at the Freestyle League are middle-of-the-road for Kyrgyzstan: national pride, calls for unity, and contempt for a widely abhorred political class. When the winning rapper – a mop-headed teenager in a black vinyl jacket and Ray-Bans performing under the name Willi – lets loose a riff on “dirty politicians robbing our country,” it scarcely draws a reaction from the crowd.

To the extent there is political rap in Kyrgyzstan, L’zeep wrote one of its anthems.

In 2008, he was watching parliamentary debate on TV. “It was just ridiculous, how ignorant these people were,” he said. “And so I wrote this song.”

“Patriot” is a vigorous denunciation of the elite that came to power in 2005’s so-called Tulip Revolution: “To hell with your tulips, screw the revolutions / No one even follows the laws of the constitution.”

L’zeep combined his pessimistic verses with an optimistic chorus: “Rise up from your knees / Don’t fall my people / Because there’s folks like me / And I’m a patriot.”

In April 2010, after another uprising drove the government of Kurmanbek Bakiyev from power, someone took “Patriot” and made a video for it on YouTube using images of the latest rebellion. In those heady days, the clip became a brief sensation.

These days L’zeep says he still feels disgust towards the country’s revolving-door politicians. But he thinks the country needs a positive message.

As a city, Bishkek is predominantly Russian-speaking, even among many ethnic Kyrgyz. Though Kyrgyz-language rappers are a minority, there are performers who drop rhymes in the state language.

Double time specialist K.A., speaking at the Freestyle League after a rapid-fire guest performance, is one. “I listen to American, Russian, and Kyrgyz rap. I choose to rap in Kyrgyz,” he said, “not out of chauvinism, but because I want to raise up our language and show that it has depth.”

There’s little glamorous about the scene. With music piracy universal, few earn money recording tracks, which are posted on the Internet as soon as they are released. L’zeep works in the Department of Fire Safety; of the two main members of LeeMitT, one works construction and the other is unemployed.

But in a way that is inspiring for a society where young people often feel disempowered, these rappers are building a community where they are the ones speaking and being heard.

“I used to listen to American rap – 50 Cent, Eminem, you know?” said Chernetsov, the organizer of the Freestyle League. “But now we want to have our own. We want to have something for ourselves that we can understand.”