Kyrgyzstan Instagram star comes of age and flies the nest

The Internet’s vast potential for self-expression seems more relevant in Central Asia than ever before. 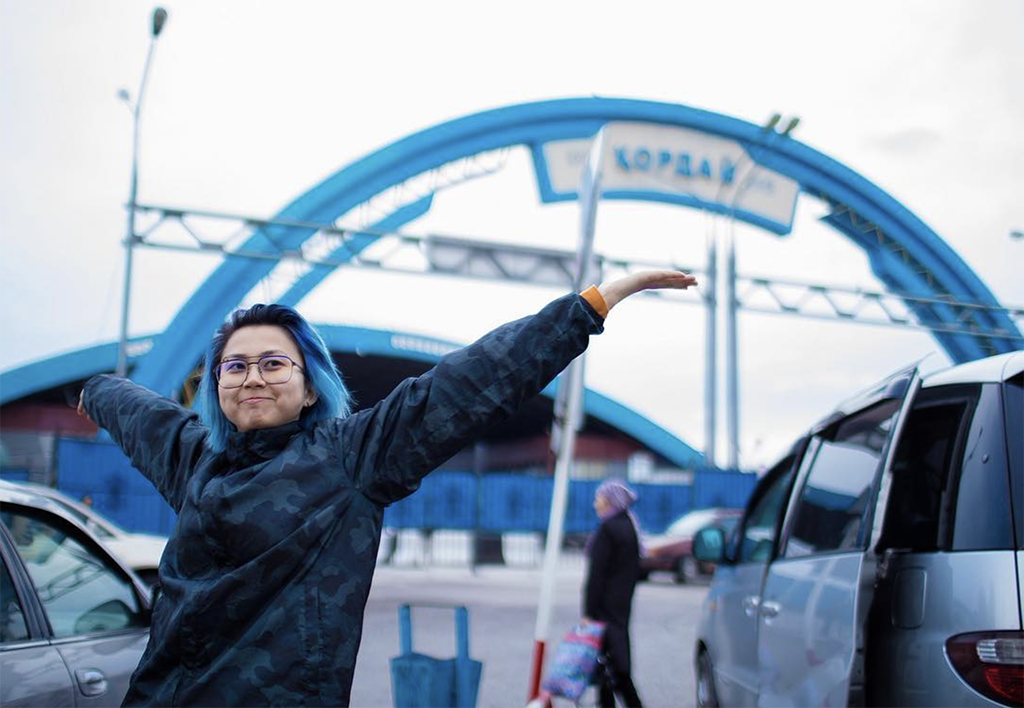 By the time she settled down in a café in one of Almaty’s most popular malls, blue-haired Kyrgyz Internet sensation Eldana Satybaldieva was wincing in pain.

Satybaldieva, better known by her Instagram moniker Eldana Foureyes, had just been crushed in a long, unsolicited embrace initiated by an excited teenage fan.

The admirer was euphoric after securing one of the most sought-after-selfies in a city that Satybaldieva recently adopted as her home.

Satybaldieva, an offline introvert, looked visibly shaken. But these are regular occurrences in Kazakhstan’s largest city. In her hometown Bishkek, “people kind of got used to me.”

“There is more work here, more projects, just more everything,” she told Eurasianet, explaining her move across the border.

In the age of distraction, Satybaldieva’s geeky, just-for fun videos have transformed her from an androgynous, uncool school-leaver into a highly marketable youth icon.

Despite having to start over when her Instagram account was hacked and wiped clean three years ago, she has now amassed close to a million followers on the platform, the bulk of them from Kazakhstan.

Pepsi, Nokia and a Kazakh electronics firm are among those that have tapped into her popularity in the five years since she began making the videos.

Average fees for adverts range from $500 to $1,000, while the Pepsi ad brought her “enough to go out drinking for a year,” she said in one recent interview with Kazakh media.

In the space of half an hour at the Dostyk Plaza, a Eurasianet correspondent watched Satybaldieva accept four selfie requests before making a flustered dash for the exit, laden with supermarket shopping.

“I don’t know. I am just an idiot. But people love idiots,” Satybaldieva reasoned.

From "Stern Kyrgyz" to sexed-up Elya

While the vlogger uses “idiot” – in its Russian feminine form idiotka – repeatedly as a self-descriptor, many of the clips that have brought her fame are suffused with comic genius. 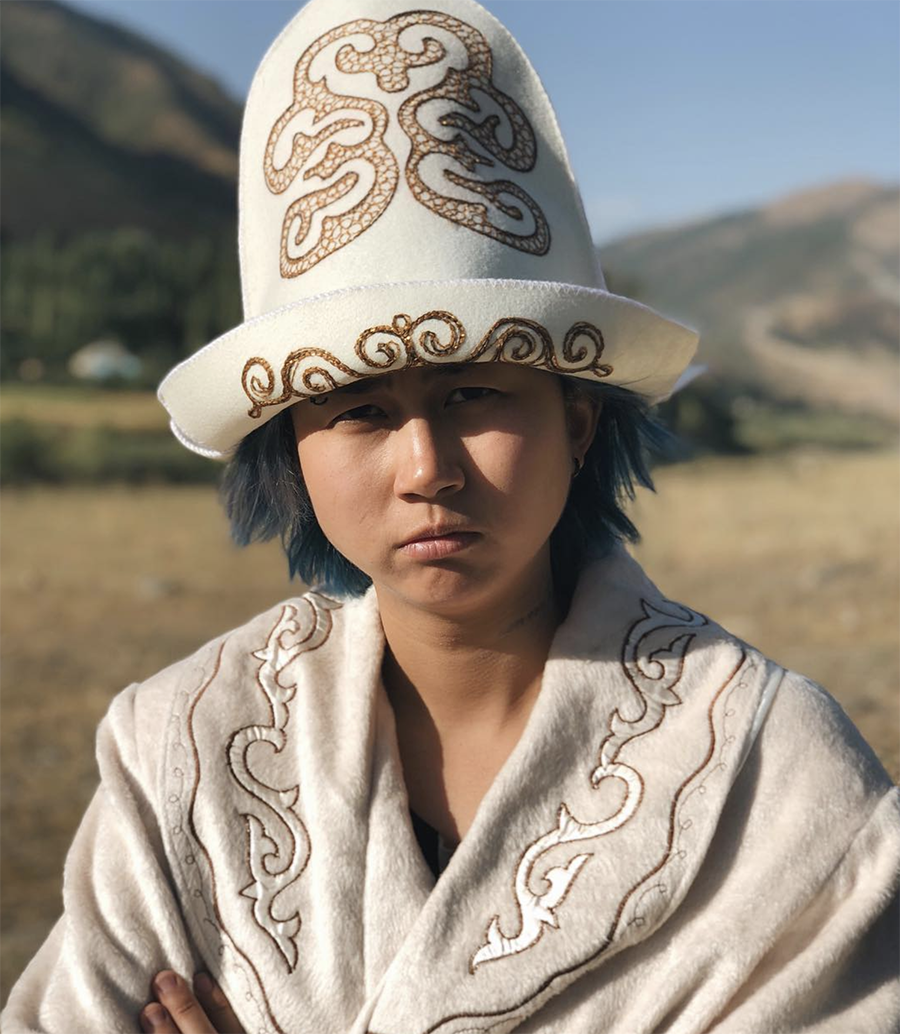 Popular early shorts included the adventures of “the stern Kyrgyz” – Satybaldieva sporting a traditional Kyrgyz hat, the kalpak, and a powerful frown – and a hilarious visit to a hygiene-challenged public toilet.

Satybaldieva’s mother featured in several clips as a rule-imposing matriarch before the account began racking up thousands of subscribers and she ruled out future appearances.

Since then, Eldana’s act has taken on new personas whose popularity threaten to eclipse the original geek next door.

“Ernest” (Eldana with a drawn-on mustache) is a smooth-talking loser whose skits are always accompanied by the opening riff from Marvin Gaye’s “Let’s Get it On.”

“Elya” is sexed-up and scandalous in a satin gown, and the heroine of a music video released in August that was viewed over 800,000 times in three months.

"I want, want it all, and what I want I get,” Satybaldieva sings in Tokalochka, a light-hearted take on the life of a tokal – the typically younger lover of a rich Central Asian man.

“Trips to Bali, new iPhone, my sugar daddy is a prosecutor,” goes another verse.

The irony of the lyric, which Satybaldieva says she did not write, is that the star’s own father, Elmurza Satybaldiev, served as Kyrgyzstan’s general prosecutor from 2007 to 2009.

Satybaldiev even served six years in jail on charges related to fatal state violence against protesters during the April 2010 revolution. He has continued to maintain his innocence since his release in 2016.

But if Tokalochka is part Freudian rebellion, Satybaldieva hides it well, and speaks of her parents in only the most glowing terms.

She mostly worries her videos – expletive-laden as well as endearing – might bring them embarrassment. She recalls the time her father gently raised the topic of her online swearing at the dinner table as “among the worst days of my life.”

Another source of discomfort for Satybaldieva is the notion that fame should bring with it new social responsibilities.

Last year, she was widely criticized by feminists for appearing in a bride-kidnapping-themed advert for a Bishkek construction firm. Playing the victim of a crime that is rampant in Kyrgyzstan she initially resists the forced marriage. When she sees the kidnappers’ lavishly furnished flat, however, she has a change of heart.

Even her friend and enthusiastic supporter Bektour Iskender, founder of the Kloop.kg media portal, called the clip “gross.”

“I never said I supported bride-kidnapping. I don’t.” The advert was clearly a joke, and one “suited to [Kyrgyz] mentality,” she said.

A series of longer videos on her YouTube channel hint at a more reflective Eldana.

In one called “Hate” she explains how she worked through her profound dislike of a high-performing Chinese classmate while taking a shower. Another, 17 things that I learned in 2017, verges on motivational speaking.

These efforts have plenty to offer young people “even if the delivery is sometimes crude,” said Karlygash Kabatova, founder of UyatEmes.kz, a website focused on sex education and other youth-centric issues.

Kabatova also noted that over time, negative comments under Satybaldieva’s content have steadily diminished, signaling a broader acceptance of her quirky act. In an online space characterized by polemic trolling, this is surprising, Kabatova said.

Satybaldieva’s status as reluctant role model was on show in 2016 at a TEDx event broadcast by Kyrgyz state television.

Clearly wracked by nerves, she was loudly applauded by a young studio audience at every turn.

“Hi Mama, I’m finally on the box,” Satybaldieva joked at one point.

The theme of that talk – the vast potential for self-expression that the Internet offers – seems more relevant in Kyrgyzstan than ever before.

In September another previously unknown young woman from Kyrgyzstan, Zere Asylbek, released an explosive song speaking out against gender discrimination.

The clip went viral, earning her an international media spotlight as well as death threats from anonymous patriarchs that accused her of shaming Kyrgyzstan.

Satybaldieva calls Zere “very cool” but reiterates that she is not ready to champion weightier causes. “I just try to show people that if you want to do something, you can,” she said.

“It doesn't matter whether it is a dumb blog or anything else.”