Critics see only oppressive censorship in the new legislation. 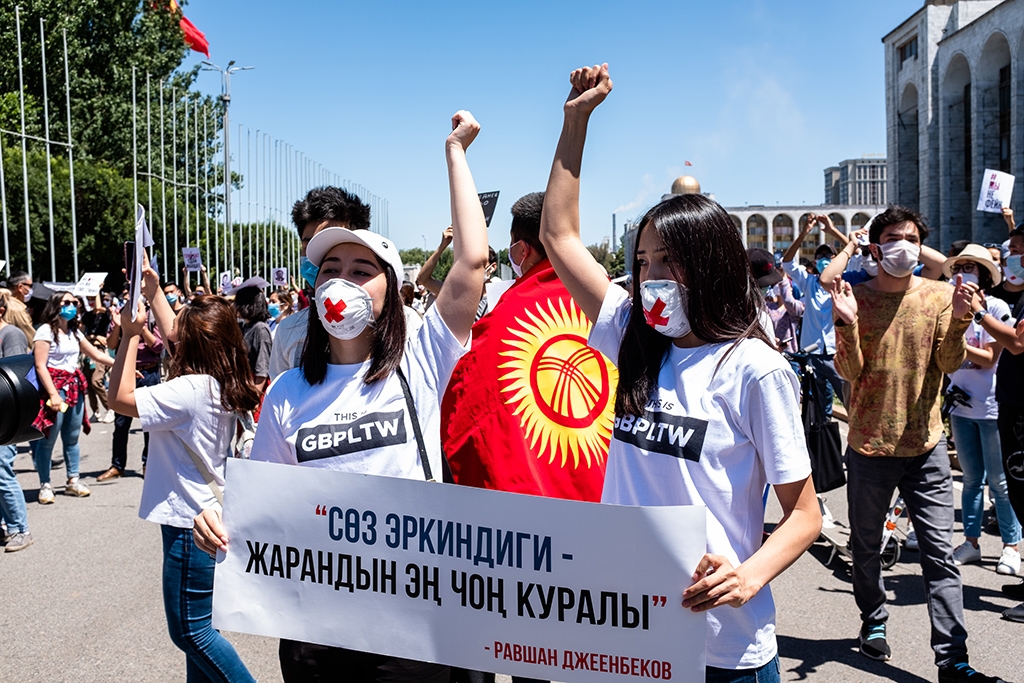 Hundreds of people defied the warnings of Kyrgyzstan’s authorities on June 29 to march through the capital and demand the president veto legislation that would give the government sweeping powers to censor online content.

Demonstrators walked along Bishkek’s leafy Erkindik boulevard, which is named for the Kyrgyz word for freedom, and eventually arrived at the gates of parliament, which last week adopted the bill in an overwhelming vote.

“We were born free, and no one will make us slaves. A bunch of fake MPs cannot shut our mouths. [But] because of our passivity, we have ended up with this wretched parliament,” a rally moderator, Urmat Janybayev, told the crowd through a megaphone.

There is broad consensus among critics of the legislation that authorities are seeking to quash the country’s fledgling investigative journalism scene.

Proponents of that genre of reporting are continuing with their fight, however. As the Bishkek demonstration was drawing to a close, a consortium of outlets, comprising the Organized Crime and Corruption Reporting Project, or OCCRP, RFE/RL’s Kyrgyz service, Radio Azattyk, and news website Kloop, published fresh allegations about laundered funds being funneled into a charitable organization operated by the Matraimov family, a powerful political clan.

The bill, which was compiled – but also, according to one fact-checking website, heavily plagiarized from similar Russian legislation – by MPs Gulshat Asylbayeva and Ainura Osmonova would notionally grant the authorities the power to shut down or block access to any website containing what they find to be untruthful. It is not yet known which state body would be charged with establishing the truthfulness of any given material.

Asylbayeva has argued that the rules are needed to stem the wave of what she described as fake information flooding social media. She described herself as a victim of such misinformation.

Another strand of the legislation requires internet service providers to store user data, such as photos, video and audio, for up to six months and to provide them to government agencies upon request.

Critics see only oppressive censorship in the legislation.

Participants of the Bishkek rally pasted electrical tape over masks worn as protection against the spread of the coronavirus. Among the more common signs held up by demonstrators were ones reading “I/We Are Not Fake” and “Veto,” the latter being an appeal to President Sooronbai Jeenbekov to reject the bill. Another sign showed a picture of Asylbayeva accompanied by the words “fake MP.”

Much of the frustration has been directed at parliament, which has evolved steadily over the years and through a variety of administrations, from a rambunctious chamber to a crony-favoring, rubber-stamping machine. Lively debate is not alien to the Jogorku Kenesh, but any legislation implicitly or explicitly supported by the government almost never meets serious resistance.

The “On Manipulating Information” bill was approved in its third reading on June 25 by all but 10 of the 89 deputies registered as being in parliament on the day. Protesters noted, however, that only 30 of the MPs that backed the bill were actually physically present and that they voted on behalf of their absent colleagues.

“When they had the public hearings, we explained that we were against [the bill] … and they just laughed in our face,” he told the crowd, who responded with shouts of “shame on the deputies.”

City authorities had sought to stop the march from taking place. The day before, the mayor’s office announced that disinfection was to be carried out along the intended route. Some demonstrators said that they and relatives had received calls from unidentified people warning them not to attend. In the event, the planned disinfection never happened.

This is the second show of public discontent against the bill. A smaller rally, attended by around 100 people, was held outside parliament on June 25, the day that the legislation was adopted. Much of the activism was confined to the internet, however, where the hashtags #сдаймандат (#GiveUpYourMandate) and #угрозадемократии #ThreatToDemocracy circulated.

Other similar rallies have been mounted earlier by the same cohort in gestures of frustration over allegations of widespread corruption as documented collectively by the OCCRP, Radio Azattyk and Kloop consortium. This demonstration was held under the tag of REакция 3.0 (REaction 3.0), the number indicating that it was the third of its kind.

In a fresh piece of reporting published on the day of the rally, OCCRP, Radio Azattyk and Kloop said they had obtained documentary evidence showing that the Ismail Matraimov Charitable Foundation had received hundreds of thousands of laundered dollars that were originally earned through major smuggling schemes overseen by a former top Kyrgyz customs official.

That official, Rayimbek Matraimov, has for years been accused by activists of using his riches and informal influence to direct much decision-making in Kyrgyzstan. Part of his alleged public charm offensive has been performed through the offices of the Ismail Matraimov Charitable Foundation, which provides scholarships to underprivileged families and covers the expense of costly medical treatment for children in need. Latterly, the foundation’s efforts have focused on helping families affected by the COVID-19 outbreak.

Repeated calls for the authorities to investigate the riches controlled by Matraimov and his family, many of whom have spent most of their professional careers in public office, have either been disregarded or led to tepid and wholly inconclusive probes.

Information for the fresh claims about the recycling of laundered funds were based on revelations provided by a Chinese national called Aierken Saimaiti, who was a long-time business partner of known Matraimov associates. After falling out with those associates, Saimaiti went into hiding, but was shot dead in an audacious gangland-style killing in central Istanbul in November 2019. Before his murder, Saimaiti had reached out to journalists to share documents that he said proved that he had played a crucial role in facilitating the laundering of hundreds of millions of dollars.

The Matraimov family and its proxies have categorically and repeatedly denied being connected to any unlawful activity.

A representative for the Kyrgyz security services told parliament in a hearing on June 2 that his agency had found evidence that Saimaiti had in fact paid journalists to disseminate information smearing Matraimov and a business associate, Khabibula Abdukadyr. The investigator, Sagynbek Samidin uulu, alleged that Saimaiti had paid Radio Azattyk journalists $100,000 to conduct their investigation. He provided no evidence for those claims.

RFE/RL’s then-President Jamie Fly dismissed the allegations as lies and an “attempt in a longstanding campaign of retaliation against journalists by corrupt individuals seeking to protect their wealth and power."