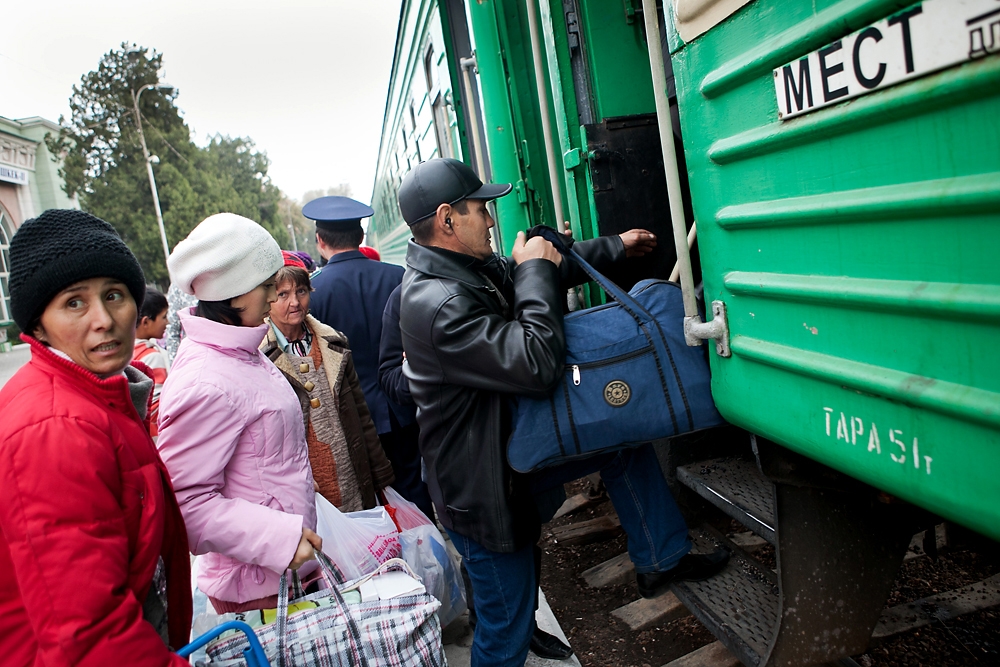 When it comes to joining the Moscow-led Customs Union, Kyrgyzstan is setting the bar high. Some political analysts say it’s deliberately too high.

The current members of the Customs Union -- Russia, Belarus and Kazakhstan -- at present aren’t willing to agree to Kyrgyzstan’s conditions for accession, and some Russian experts contend that officials in Bishkek are trying to drag out the process. With a weak, import-heavy economy, coupled with combustible domestic political conditions, procrastination has a compelling logic for Kyrgyz authorities, they say.

A roadmap for membership, a document drafted by Kyrgyz policymakers in coordination with lobbyists and experts from different sectors of the economy, would serve as the basis for Bishkek’s accession into the union, provided it meets the approval of current members, as well as the body’s regulator, the Eurasian Economic Commission (EEC). But at the seventh meeting of an intergovernmental working group on Kyrgyz entry, held in mid-August, a draft roadmap was rejected and sent to the regulator for modifications. The working group hasn’t met since.

In an August 13 interview with Moscow’s Nezavisimaya Gazeta, Alexander Knyazev, a pro-Kremlin analyst who is “persona non grata” in Kyrgyzstan for criticizing authorities there, accused Kyrgyz policymakers of trying to preserve an economy that is “totally criminalized” by Chinese contraband and Afghan narcotics. The country’s parliament and government is packed with businessmen that have economic interests in non-Customs Union members, he noted, and has long been accustomed to “receiving preferences from Russia and other partners, without giving anything in return.”

Knyazev is not the only one who feels Bishkek is stalling on accession. In February, Russia’s ambassador to Kyrgyzstan expressed optimism that the country would be ready to join by the end of the year. But less than three months later, Kyrgyz President Almazbek Atambayev told journalists that even membership in 2015 might be optimistic. In 2010, Atambayev, then premier, began steering Kyrgyzstan down the path to membership.

Bishkek seems to have a vision of accession that differs from that of the current Customs Union trio, whose economies are more industrialized and historically more protected than that of Kyrgyzstan, which was the first former Soviet state to join the World Trade Organization. At the presentation of their roadmap, Kyrgyz delegates demanded the right to retain low, WTO-style tariffs on up to 1,000 different imported goods, many from China.

Roman Mogilevski, an economist at Bishkek’s University of Central Asia, doubts member countries would ever agree to such a condition. “If the demands concern goods [Kyrgyzstan] just re-exports or consumes, I think it is unlikely,” he said.

Many of Bishkek’s hoped-for concessions are related to re-exports, otherwise known as the shuttle trade, in which cheap Chinese consumer goods filter through Kyrgyzstan on their way to Kazakhstan and beyond. The goods are moved in containers weighing up to 50 kilograms, the limit for individual traders. The shuttle trade, which Mogilevski says was worth almost twice Kyrgyzstan’s GDP at its peak in 2008, is vulnerable to the vagaries of regional politics and global economics. The trade, for example, took a hit during the 2009 devaluation of the Russian ruble and Kazakh tenge. It also suffered during Kyrgyzstan’s political chaos in 2010 that prompted Kazakhstan to close key border crossings.

Joining the Customs Union, many in Bishkek fear, could kill the shuttle trade altogether. And that concern is sufficient to give Kyrgyz politicians reason to drag their feet, say observers, since President Kurmanbek Bakiyev was ousted in 2010 in part due to economic troubles, and, in part, due to Russian pressure.

Now, more than three years since Bakiyev’s downfall, some of the strongest arguments for Kyrgyzstan joining the union still revolve around Russia, which supplies Kyrgyzstan with petrol products duty free. “People talk about the risks of entering the Customs Union, that costs will rise. But what about the risks of not entering?” says Farhad Tologonov, head of Legprom, a light-industry lobby. “If Russia reapplies fuel tariffs, then costs will rise across the board.”

Moscow has shown in recent months that it is willing to use hardball tactics to compel other former Soviet republics to join. Ukraine, for instance, accuses the Kremlin of using its consumer standards agency, Rospotrebnadzor, to block imports from a Ukrainian chocolate and candy manufacturer. Russia has pursued separate bullying tactics with Armenia and Moldova. All three have been negotiating trade deals with the EU that would effectively prevent them from joining the Customs Union. For now, Armenia appears to have bowed to the pressure.

Kyrgyz poultry farmers are among those in Kyrgyzstan who are rooting for Customs Union membership. Currently, according to Talaibek Raimkulov, director of the Shumkar poultry plant in Issyk-Kul Province, only 30 percent of Kyrgyzstan’s eggs are laid in Kyrgyzstan, with imports of Chinese eggs overwhelming local producers. While Kazakh and Russian eggs are also competitors, Raimkulov feels his business would “benefit on balance” from Bishkek’s entry in the Customs Union since prices for chicken feed, mostly grain imported from Kyrgyzstan’s northern neighbors, would drop.

“There will still be competition. But with fewer [Chinese] imports and cheaper inputs, there will be room for domestic producers to expand,” Raimkulov told EurasiaNet.org.

Crop farmers seem less enthusiastic. Without some form of protection from Russian and Kazakh agricultural exports, “crop-growing as a whole will cease to be a viable economic activity,” fears Joomart Jumabekov, manager of the Chui-Talas Agricultural Consultancy Service, a non-profit that works with farmers in northern Kyrgyzstan.

One thing that all Kyrgyzstanis may rue if the country enters the Customs Union is a sharp rise in the cost of second-hand cars. Currently, Kyrgyz car dealers do a strong trade reselling lightly taxed, used automobiles sourced from Europe and Japan, both to local consumers and Kazakh and Russian clients, who drive their purchases over the border, cheating their own governments’ punitive tariffs on cars produced abroad.

Bakytbek Asleitov, a partner in a Bishkek car dealership, estimates that the street price of his Japanese-made cars will “probably double” with the introduction of Customs Union tariffs on automobiles, effectively putting him out of business. He compares the situation to Uzbekistan “where [the government] puts everyone in Daewoos,” using strategically high tariffs to protect a joint venture between Tashkent and American-owned GM, previously Korea’s Daewoo.

“But since we don’t have any car plants of our own, we will probably have to get used to [Russian-made] Ladas, which break after a year, or bicycles,” Asleitov says.