Kyrgyzstan: Is Corruption Controversy a Sign of Political Trouble Ahead? 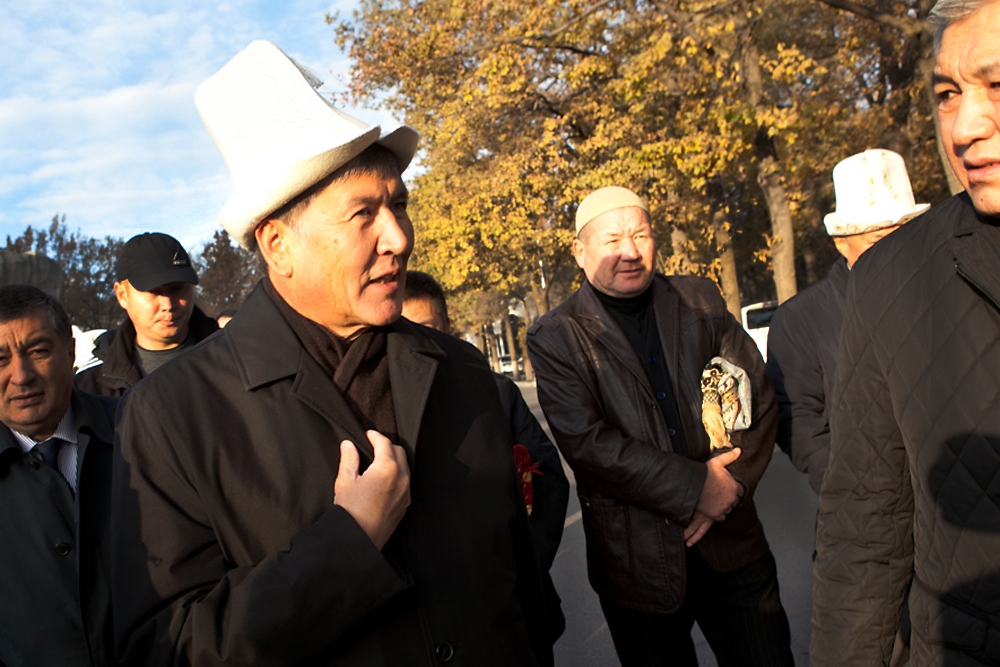 Recent corruption-related arrests are suspected to be part of a political feud between Atambayev and opponents. (Photo: David Trilling)

A couple of high-profile corruption cases in Kyrgyzstan are sparking concerns that the Central Asian nation is about to hit another pocket of political turbulence.

Since the collapse of former president Kurmanbek Bakiyev’s administration in April 2010, Kyrgyzstan has experimented with a mixed parliamentary-presidential system, featuring an empowered legislative branch and, at least theoretically, a tamed executive. The new authorities have repeatedly promised to confront Kyrgyzstan’s staggering corruption problem. But little tangible progress has been achieved. And now it seems as though anti-corruption efforts are becoming entangled in politics, creating a fresh threat to the new and still-fragile governmental balance.

Trouble started brewing when the former Bishkek mayor, Nariman Tyuleyev, who is currently an MP affiliated with the opposition Ata-Jurt party, was arrested on June 21. Many observers in Bishkek believed President Almazbek Atambayev orchestrated the arrest in an attempt to stymie Tyuleyev’s participation in upcoming Bishkek municipal elections. Then, on July 5, Ravshan Sabirov, the minister of social development, was arrested and charged with attempting to extort tens of thousands of dollars from an international adoption agency. The timing and the circumstances prompted observers to believe Sabirov was arrested simply to distract public attention from Tyuleyev’s case.

Critics say recent events are more of an indication that a high-level power struggle is underway than they are a sign Atambayev’s administration is making a concerted effort to battle graft. Kyrgyzstan ranked 164 out of 183 countries in Transparency International’s 2011 Corruption Perceptions Index.

One element that is fueling suspicion is that the main body investigating the two accused is the GKNB, the opaque successor to the Soviet-era KGB. The GKNB and the Prosecutor General’s office, which supported suspicious legal maneuvers following the arrests, are both run by close Atambayev allies. The executive branch thus appears to exert heavy influence over the fight against high-level corruption. This, in turn, is prompting many in Bishkek to see a political motive behind the arrests of Tyuleyev and Sabirov.

Local media reports are reflecting widespread public skepticism. For example, in a July 6 commentary, the 24.kg news agency speculated over whether Sabirov and Tyuleyev were victims of a “real battle against corruption – or a witch hunt.” The commentary went on to describe the normally quiet summer months as politically “hot.”

Summer may get hotter, still.

While the legislature is currently on holiday, several MPs are calling for an emergency session to discuss a vote of no confidence in Prime Minister Omurbek Babanov’s government. Babanov – himself beset by constant corruption accusations – saw his own much-vaunted contribution to the fight against graft, the State Service for Combating Economic Crimes, fail to secure funding before parliament went into summer recess on July 1.

According to Shairbek Juraev, director of the Central Asian Studies Institute at the American University of Central Asia, a vote of no confidence on the government is likely. He added the recent arrests are more about “who is networked and who isn’t” than a systematic attempt to root out high-level corruption.

Calling both Tyuleyev and Sabirov “relatively easy cases,” Juraev argued that “until the government shows it can tackle corruption in the highest places … people will label this as political persecution.”

Tyuleyev’s arrest in particular has captured widespread attention while prompting indignation in the 120-member legislature. Several deputies, even opponents of Tyuleyev’s party, cried foul over a perceived lack of due process. After accusing him of profiting to the tune of $1.4 million in a transaction involving Chinese-sourced buses during his time as mayor, the Prosecutor General’s office quickly stripped Tyuleyev of his parliamentary immunity, a precedent that has given others in the parliament cause to worry. He is being held in detention in a GKNB holding facility.

Kurmanbek Osmonov, a member of Tyuleyev’s party and chair of a parliamentary committee investigating the arrest, refused to discuss whether Tyuleyev is guilty or not, nor would he endorse a widely-held view that the arrest was connected to Tyuleyev’s promise to participate in municipal elections in October. “[The committee’s work] isn’t about whether Nariman Tyuleyev is good or bad, corrupt or not corrupt. It is about the legality of his arrest and detention,” said Osmonov, who served as chairman of the Supreme Court under former presidents Askar Akayev and Kurmanbek Bakiyev.

According to Osmonov, the committee invited Prosecutor General Aida Salyanova and GKNB head Shamil Atakhanov to their sessions. The two Atambayev allies declined to appear. “We demanded official copies of the order given to the investigative organs [and] the arrest warrant [for Tyuleyev]. They couldn’t present us with these documents, because there were no documents to present us with – proper procedures had not been followed,” Osmonov told EurasiaNet.org.

A GKNB spokesman refused to comment on the spy agency’s anti-corruption mandate.
Wherever Kyrgyzstan’s corruption battle is destined to go, one observer warns “a smarter strategy” is required. Kyrgyzstan, which has seen two presidents kicked out of office in seven years, is too unstable to bear a “frontal assault” on a jittery elite, says Johan Engval, a post-doctoral researcher at Uppsala University in Sweden whose research focuses on corruption in Kyrgyzstan.

“With this mixed parliamentary-presidential system, corruption itself has become more dispersed,” he told EurasiaNet.org. “If before it had one recognized center, now there are several.”