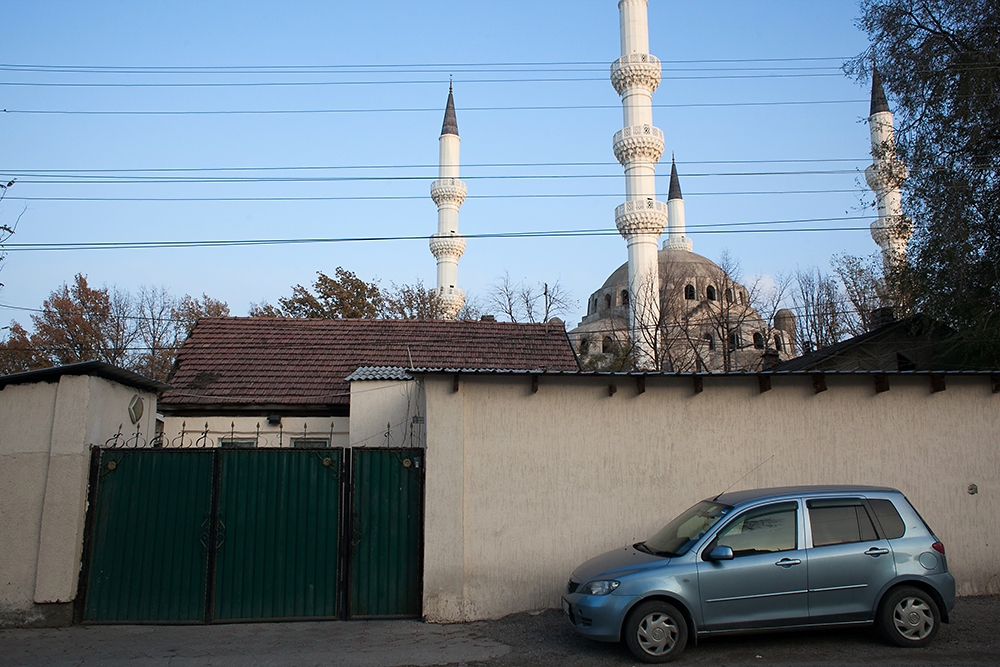 With the growth of Islam in Kyrgyzstan, mosques, such as this Turkish-built mosque rising in the Bishkek’s northeast, are attracting more adult worshippers while Islamic-focused kindergartens are also becoming popular. Unease with religious kindergartens is part of a wider backlash among secular Bishkek residents against growing religiosity. (Photo: David Trilling)

Feruza opened the green door of an unmarked two-story house on the outskirts of Bishkek and began a quiet tour of a building praised in an online forum as an “Islamic kindergarten.”

“The director and deputy director are at prayers,” whispered Feruza, a caregiver at the kindergarten. “Every Muslim here older than three prays.”

The unlicensed kindergarten, Butuz, is one of an unknown number of institutions that are covering a shortage of state-run pre-schools in Kyrgyzstan, while catering to growing demand for a religious education. According to one online forum in the capital, Bishkek, there are at least five such kindergartens in the city. They appear to operate in an unregulated grey area. Officials from the Education Ministry are unable to answer questions about the kindergartens, and do not seem to know how many exist. At the same time, they insist they violate the country’s secular education standards.

During “quiet hour” on a recent weekday at Butuz [a Russian word meaning, roughly, “chubby, healthy baby”], boy and girl toddlers slept in separate rooms. A female caregiver, who appeared to be a teenager, stirred a pot of beetroot soup.

“The children learn Arabic, Kyrgyz, Russian and English. Even Russian parents send their children here,” said Feruza, 21, who covers her hair with a hijab and did not provide a family name. “They [Russian children] do not pray, but their parents like the orderliness here. There is no television. No dancing.”

Kyrgyzstan, which provides free education for citizens aged 7-17, is grappling with an acute kindergarten shortage. Currently, there are around 700 kindergartens in the country, a quarter of which are private. To provide pre-school education for all Kyrgyzstani children, the government would need to build at least 1,500 more kindergartens, education officials told parliament on April 8. At the same session, parliament passed a law granting some tax exemptions to private kindergartens in an effort to stimulate growth in the sector. Kindergartens applying for licenses to operate no longer need to obtain permits relating to sanitary and fire regulations.

But in a country where secular and religious norms are frequently viewed as being in conflict, and in the aftermath of propaganda videos by the Islamic State purporting to show Central Asian children studying and training in terrorist camps in Syria, Butuz is not the kind of institution authorities welcome.

“Such a kindergarten would not and could not be registered and there are no such private kindergartens on our list,” Aigul Kamalova, a pre-school specialist at the Education Ministry, told EurasiaNet.org. “Every private kindergarten must submit a plan with details of their charter and the aims of the institution. An institution where children read the Koran is not correspondent with the Ministry’s standard.”

Kamalova added that the Ministry uses “all channels of communication” to persuade parents to use only licensed kindergartens. Butuz charges approximately $100 per month for tuition, a figure that is slightly cheaper than the average private kindergarten.

A father of three children at Butuz who describes himself as middle class says that Kyrgyzstan needs more kindergartens like it. “The directors tell us they get phone calls from authorities [threatening to shut them down], but that when the authorities see the kindergarten they understand it is a good place,” said the father, Kanat. “The caregivers here relate to children with love and affection, but are strict when needed. We know the food will be safe and halal. Through knowledge of the hadith [Islamic teachings] our children become more obedient and less spoiled.”

Feruza, the caregiver at Butuz, would not confirm or deny pressure from authorities, but was reluctant to open the door to a stranger.

Mosque-state tension is nothing new in Kyrgyzstan. In 2011, a scandal erupted around the installation of a prayer room in parliament. Civic groups said construction of the room violated the country’s secular constitution. Then, this month, ahead of the five-year anniversary of the unrest that brought him and his allies to power, President Almazbek Atambayev drew fire for initiating the construction of a mosque to commemorate the uprising’s victims.

Debate is also raging around illegal parking by the increasing number of men attending prayers each Friday at Bishkek’s main mosque. Local residents complain the laws do not seem to apply to believers.

Adil, a university student in Bishkek, believes that the threat of Islamic radicalism is often exaggerated in Kyrgyzstan, but admits that the speed and seriousness with which people are turning to religion is stoking fear among the secular-minded.

“I had a friend who worked at a mobile phone operator who became religious overnight. He quit his job because the operator introduced a system of credit he said violated Sharia law,” Adil said. “Now all his friends […] are serious Muslims and we barely speak. It is like they are trying to compensate for all the years we did not have Islam.”