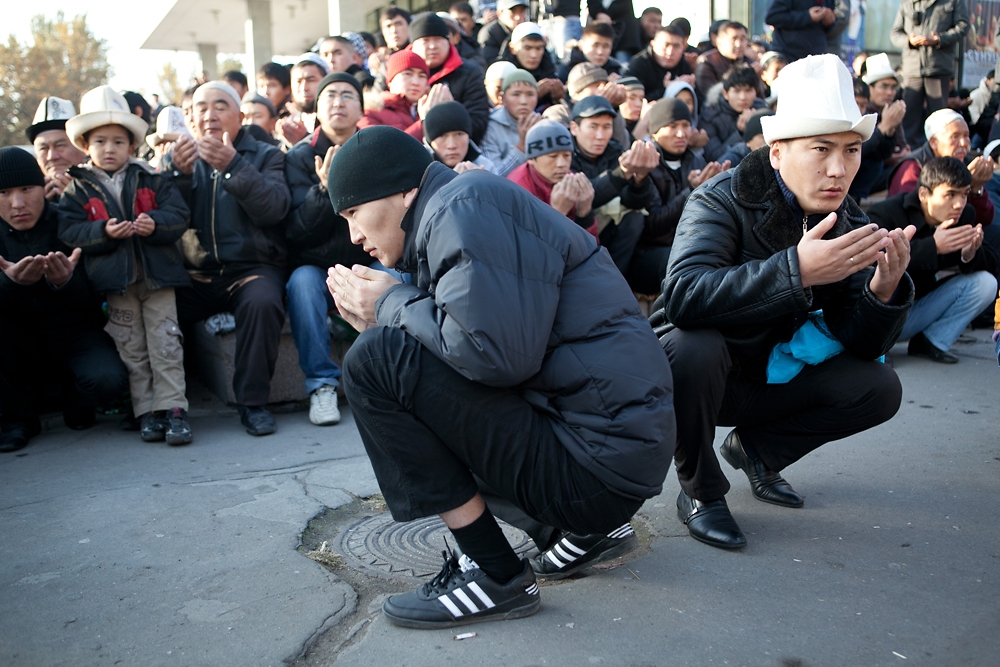 On a warm autumn day in early November, pedestrians in downtown Bishkek met an unusual sight: a 500-strong crowd of hijab-sporting female Muslim activists riding bicycles, heading to a state hospital to donate blood. “Passersby were in shock,” laughed Jamal Frontbek kyzy, whose organization Mutakallim helped organize the event. “We wanted to dispel stereotypes. We wanted to do something good for people.”

Mutakallim leads discussions on the role of women in Islam, organizes confidence-building exercises for female Muslims, and advocates for girls’ right to wear hijab in schools. Non-governmental organizations (NGOs) with such Islamic-themed missions sit at the crossroads of an often fraught discourse on the role of Islam in a country where many civil society groups fiercely defend secularism, a Soviet legacy in a country with a lengthy Islamic cultural tradition. Groups like Mutakallim and their more secular counterparts participate together in roundtables and conferences, but often find themselves on opposite sides of heated public debates, most recently about sex-ed.

According to the State Committee on Religious Affairs, the number of registered Islamic organizations and religious educational institutions has doubled in the last 13 years, reaching more than 2,000. Few have failed to notice the swelling number of people praying in public spaces at religious festivals such as Kurban Ait, and many believe the number of Kyrgyz who regularly practice Islam is sharply rising.

Opinions on the November 5 “bicycle march” soon filled the comments sections of popular Kyrgyz online media outlets: local Internet users heaped both praise and scorn on the event. Analysts such as Medet Tiulegenov, chair of the International and Comparative Politics Department at the American University of Central Asia, believe that organizations such as Frontbek kyzy’s are trying to position themselves as “a bridge” in society. What’s unclear is where that bridge leads.

“Are they trying to send a message to society as a whole, or to the government? Perhaps they are trying to tell the government: ‘look, this process [of growing religious observance] is happening anyway, so you should work with progressive organizations like us before less progressive ones take our place,’” Tiulegenov told EurasiaNet.org. [Editor’s note: Tiulegenov previously served as executive director of the Soros Foundation-Kyrgyzstan, an entity that is part of the Soros Foundations Network. EurasiaNet.org operates under the auspices of the Open Society Foundations in New York, a separate part of the Soros network].

Muktallim’s leader has come under fire in some corners for her vociferous defense of the right of schoolchildren to wear hijab in schools, a freedom some prominent rights defenders have also supported as schools across the country implement de facto bans.

As a whole, Kyrgyzstan’s civil society remains dependent on outside assistance. Frontbek kyzy claims that her small operation is funded by private contributions from domestic businessmen and says she would welcome donations from Muslim governments abroad. While many groups working to bolster the rule of law face accusations from conservative and nationalist politicians of being agents of Western influence, Frontbek kyzy complains that people call her a “proponent of Arab culture.”

“Some people have nostalgia for the Soviet Union,” she explained. “They complain that girls used to wear headbands and now they wear hijabs, so they start handing out recommendations.”

Saltanat Musuralieva of the NGO Hadisy – named for the canonical sayings of the Prophet Muhammad – said there is a need for organizations that can reach Kyrgyzstan’s sometimes-isolated religious communities. A few years ago Hadisy partnered with the Global Fund to Fight Aids, Tuberculosis and Malaria to raise awareness about HIV/AIDS. But Musuralieva, herself a practicing Muslim and a doctor by training, says that such opportunities are fleeting.

“We called our organization Hadisy … because practicing Muslims are our target group. Of course, many donors and local NGOs see an Arabic name and get slightly frightened,” she said.

Dinara Oshurahunova, director of the Coalition for Democracy and Civil Society, said religious and secular groups are incorrectly perceived as being in perpetual opposition to each other. Human rights activists without religious affiliations were among the first to defend believers’ freedom to worship after a clash between authorities and practicing Muslims in the southern town of Nookat in 2008, she recalled. If divisions exist between Islamic and secular civil society groups, Oshurahunova maintained, they are “the work of ambitious politicians, who use religion and religious groups for their own goals.”

Frontbek kyzy of Mutakallim credits organizations like Oshurahunova’s Coalition for joining efforts to defend hijab in public schools, but is less conciliatory toward the authors of a pamphlet on sexual education that has caused a stormy public debate. The pamphlets, published by the Alliance for Reproductive Health with support from the UN and the German government, answer teenagers’ questions about sex, puberty and adolescence. By Western standards, the pamphlets, which contain no nudity or graphic drawings, are benign.

But Frontbek kyzy’s views underscore ongoing challenges in efforts to bridge the religious and secular communities. “They stupidly transferred them [the pamphlets] from some [liberal place] like Holland and transplanted them onto one like Kyrgyzstan without attention to local culture and mentality,” she told EurasiaNet.org. “Whoever did that should be put in jail.”