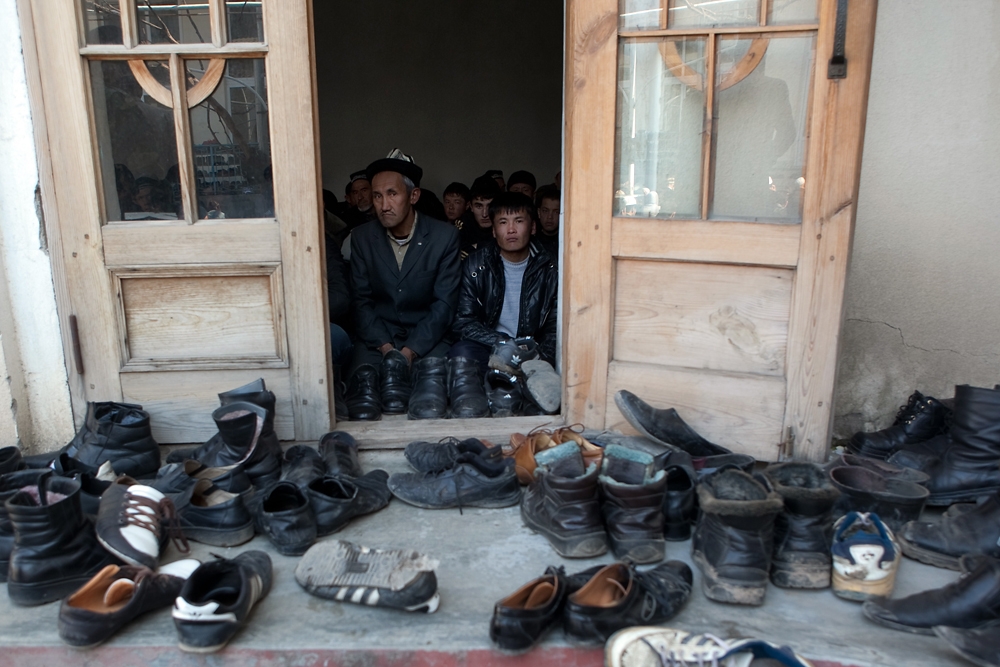 In the past decade, Tablighi Jamaat – banned in other Central Asian countries - has established strong roots in Kyrgyzstan. (Photo: David Trilling)

A few miles east of downtown Bishkek, where the asphalt road dissolves into pitted dirt lanes amid Soviet-era apartment blocks, a newly renovated mosque gleams in the night. Inside, sitting on the floor under three bare fluorescent bulbs, a young man speaks in Kyrgyz to a group of 12 men.

“We must remember God in all our actions,” he says, imploring Muslims to join him for a house-to-house mission. “We must make God the center of our lives and set aside human things.”

This scene, repeated across the country thousands of times a year, is the product of a controversial Muslim revivalist movement that in the last decade has established strong roots in Kyrgyzstan. Founded in 1926 to revive faith among Muslim communities in India, Tablighi Jamaat -- “the Proselytizing Society” -- spread into Central Asia following the collapse of the Soviet Union. The group is banned in Russia and all Central Asian countries, except for Kyrgyzstan.

The signature feature of the movement is the concept of “daavat,” meaning “to call.” Traveling in jamaats, or groups, missionaries visit local communities to testify about their faith. These missions can last just a few days. But some go on for 40 days, or even four months, although such long sojourns are now strictly regulated in Kyrgyzstan.

Emil Nasritdinov, a professor of anthropology at the American University of Central Asia and a participant in the movement, said certain cultural features account for its success among the Kyrgyz. “[Kyrgyz have] a strong oral culture, and daavatchi practice is built on communication, on talking,” Nasritdinov said.

Islam originally spread among the Kyrgyz through mystical Sufi orders that were “not so much focused on scholarship as on your spiritual connection with God.” After 70 years of state-sponsored atheism in Kyrgyzstan and across the former Soviet Union, the emphasis on the renewal of individual faith is appealing.

The missions have drawn criticism from officials suspicious of rising Islamic sentiment in the country. In October, Kurbanali Uzakov of the State Commission on Religious Affairs alleged that Tablighi Jamaat encourages extremism and should be outlawed. Meanwhile the head of the State Committee on National Security (GKNB), Keneshbek Dushebayev, has compared the movement to Hizb-ut-Tahrir, another revivalist movement active in Central Asia.

Unlike Hizb-ut-Tahrir, which is banned in Kyrgyzstan and across the region, Tablighi Jamaat does not call for rule by Islamic law. Instead, the movement explicitly forbids all political discussion.

On a recent Friday at Bishkek’s central mosque – where the chief imam is an active daavatchi, having spent nine years studying in Pakistan – jamaats gathered after prayers in preparation for departure on mission work. An experienced daavatchi lectured a group of 10, many of them teenagers, about to leave on a three-day trip.

“We don’t want to hear [about President Roza] Otunbayeva, [ousted President Kurmanbek] Bakiyev, candidate this, candidate that, none of it. All these are worldly things. They do not concern us,” the davaatchi said, while referring to Kyrgyzstan’s presidential election on October 30.

“We don’t want power, we don’t want authority,” Rovshon Eratov, the head of the Office of Daavat, told EurasiaNet.org. “He who seeks power destroys himself.”
But to counter widespread suspicion, Tablighi Jamaat followers have made a number of adjustments.

For example, daavatchis have altered their dress to suit national tastes. Local media and Kyrgyz traditionalists had criticized daavatchis who had returned from trips to India and Pakistan wearing long tunics, baggy pants and turbans in emulation of the Prophet Mohammed. Members are now encouraged to wear a chapan robe and national headgear like a felt kalpak, although a turban is permitted during prayers.

“We have religion and we also have nationality,” said Eratov of the Office of Daavat. “We cannot separate ourselves from the people.”

In mosques around Kyrgyzstan, the word ‘tablighi’ has been replaced by ‘daavatchi.’ The rebranding has been so successful that some young participants interviewed by EurasiaNet.org did not recognize tablighi.

“Daavat is an obligation for all Muslims. It is not a movement at all,” said Duz, an information technology student in Bishkek who has been going on missions for 10 years.

After prayers at the Bishkek mosque recently, jamaats gathered with backpacks and duffel bags in preparation for their trips. In a country where disdain with a corrupt ruling class is ubiquitous, the daavatchis’ conversations may be non-political, but the criticism is clear. “A society needs ethics,” said Duz. “Everywhere you have people stealing, drinking, using drugs. All we are saying is, if you are a Muslim, behave like a Muslim.”