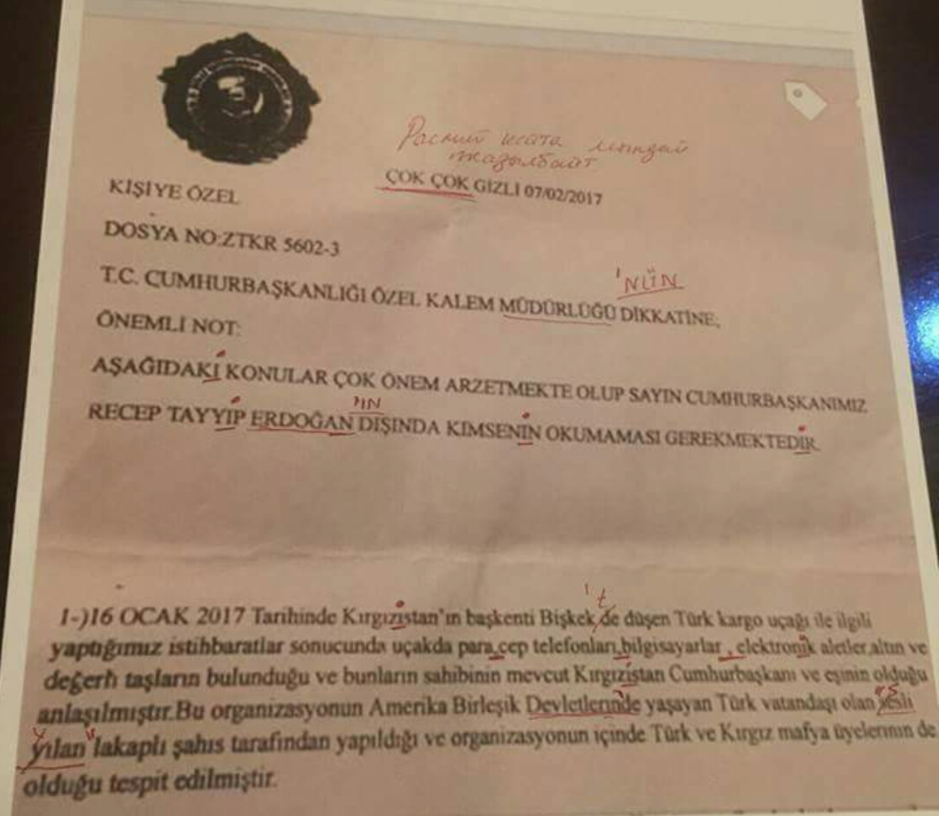 The jailed leader of Kyrgyzstan’s opposition Ata-Meken party fired back at the man he believes has engineered his predicament — President Almazbek Atambayev — accusing him of seeking to cover up his own corruption.

Omurbek Tekebayev issued a statement through his lawyers on March 1 alleging that Atambayev may have been the owner of cargo on a plane that crashed in January outside the capital, Bishkek, killing 39 people.

Tekebayev was detained by agents of the State Committee for National Security in the early hours of February 26 and later charged on suspicion of committing acts of corruption while he was acting deputy prime minister in 2010. The wave of detentions of leading Ata-Meken members has led observers to suggest the party is being targeted with politically motivated prosecutions.

This most recent arrest sparked off days of relatively low-key protests, although Tekebayev supporters have vaguely committed to holding rallies until he is released. A court earlier this week ordered that the Ata-Meken leader should remain in custody for at least another two months pending further investigations into allegations against him.

Accusations that Atambayev was in some way linked to the contents of the doomed Boeing 747 cargo plane have been floating around as gossip, although Tekebayev is the first public figure to make the claims so boldly.

RFE/RL’s Kyrgyz service in February compiled an impressively detailed report highlighting some intriguing and unanswered questions around the plane. One issue that remains unclear is whether when the plane was attempting to make its scheduled landing during intensely stormy weather in Bishkek airport simply to refuel — as officially stated — or to drop off dozens of tons of undeclared imports.

Speaking in parliament shortly after the crash occurred, Tekebayev claimed that many items found among the wreckage had accompanying material printed in Kyrgyz and Russian, which would not make sense if the plane was only carrying goods between China and Turkey. It is not certain any of those claims have yet actually been confirmed.

Tekebayev now purports to have documentary evidence showing Atambayev was the ultimate beneficiary of those wares. His lawyers have said that they too are being put under pressure to hand over the originals of these alleged documents.

“There is an emblem of the Turkish security services. In the document, it states that the cargo in the plane — computers, jewelry, mobile phones, precious metals and money — belonged to Atambayev and his spouse,” one lawyer said.

At first glance, it appears Tekebayev may be very badly shooting himself in the foot.

A copy of the alleged document posted online includes multiple crude linguistic errors, severely undermining its credibility. The Turkish ambassador in Bishkek was also quick to call the document a forgery.

Atambayev’s office has derided the claim.

“This is not just absurd. This is not just a lie,” said presidential spokesman Almaz Usenov, “This is an attempt to give this case a clearly political flavor and to mislead the general public.”

Tekebayev has separately claimed that he has information that Atambayev has assets ferreted away in Cyprus-based offshore companies.

This confrontation between Tekebayev and Atambayev — two dinosaurs on the Kyrgyz political scene — began ahead of the referendum called late last year to approve changes to the constitution. Tekebayev’s firm opposition of the amendments earned him and his closest allies Atambayev’s deep contempt.

The president is playing it cool, however, denying that the detentions of Ata-Meken lawmakers have anything to do with politics.

“This is not repression, this is straightforward corruption and fraud. There are many witnesses,” Atambayev has said.

While the political head-butting carries on, a hardcore group of around 300 or so people are promising to hold a series of “rallies without end” in a demand for Tekebayev to be released. So far, the protests have been largely lacking in energy — some in attendance have confessed to reporters that they were not entirely sure why there were — so any thoughts of major revolts may be misplaced, for now.