The president-prime minister has pledged to hold elections soon. 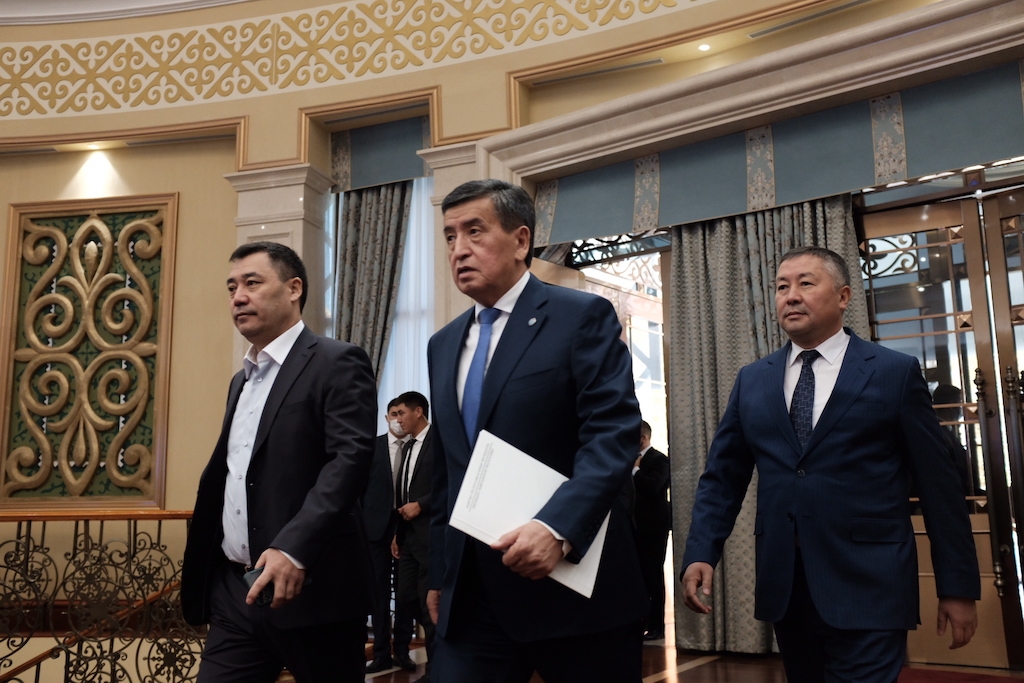 Out with the old, in with the new: Japarov, Jeenbekov and Isayev striding into a congress hall at the State Residence on October 16. (Photo: Danil Usmanov)

Kyrgyzstan’s newly appointed prime minister has firmed his grip on power by assuming the office of interim president in a move endorsed by a cowed parliament.

Speaking to lawmakers assembled at the State Residence on October 16, Sadyr Japarov described his ascent to high office as the result of a “peaceful and legal transfer of power.”

Sooronbai Jeenbekov, who was pressured into resigning one day earlier amid threats by crowds of Japarov’s supporters to expel him through force, said in the same venue that his departure was motivated by a desire to avoid bloodshed.

“What I prize above all else is the unity of our country and our people, and the harmony of our society,” Jeenbekov said. “I decided to relinquish the post of president to preserve peace in our country and avoid divisions in society.”

Jeenbekov is only the latest president in Kyrgyzstan to be expelled from office by the street. Unlike Askar Akayev and Kurmanbek Bakiyev, who were overthrown in 2005 and 2010, respectively, it does not appear that he will be compelled to go into exile. Lawmakers warmly applauded Jeenbekov as he departed the assembly hall in the State Residence.

Deputies voted in the same session to lift a state of emergency in the capital, Bishkek, that had been imposed to contain the disturbances that have paralyzed government since October 5 protests over discredited parliamentary elections spiraled into unrest.

Eager not to be perceived as undertaking a total power grab, Japarov, who was serving a prison sentence on kidnapping charges until he was released by his supporters on October 6, pledged that more elections will be held in the coming months.

A vote to pick a new president should be held by no later than January 10, he said. That date marks the last Sunday within the 90-day limit to elect a new president that was set ticking by Jeenbekov’s snap resignation.

A Central Elections Commission representative added some confusion into the matter when speaking to TASS news agency by proposing that the presidential election could instead take place on January 17, which is outside that 90-day period.

Japarov also suggested changes should be made to parliamentary elections to reduce the current 7 percent threshold for parties to enter the legislature to 5 percent. And once a new parliament is elected, changes could be made to the constitution, he said.

“This is my personal opinion. I am not pressuring anybody. I believe we should first hold parliamentary elections and then carry out constitutional reforms,” Japarov told lawmakers.

A Central Elections Commission spokesperson told Eurasianet that parliamentary elections could take place on December 20, but that a definitive decision would only be made by next week.

Japarov has not yet disclosed whether he intends to flout the existing rules and run for president himself. Interim presidents are not, in theory, permitted to put themselves forward in an election to pick a head of state.

It took a veteran player of Kyrgyzstan’s political scene, Omurbek Tekebayev, who reclaimed his seat in parliament on the same day all these events played out, to remind Japarov of that fact.

Tekebayev added that any elections held in defiance of constitutional rules could undermine national stability.

The fact that Japarov has taken over the reins as interim president was itself only made possible through twisting of the rules, however. When Jeenbekov declared his resignation, the mantle should by rights have been passed to the speaker of parliament, Kanat Isayev, who was voted into his job by lawmakers earlier this week.

But the same roving pro-Japarov demonstrators who have been laying siege to government buildings in Bishkek since this crisis began and who managed to pressure Jeenbekov into leaving office had intimated that they would react poorly to Isayev becoming interim president. Recurrent chants of “Arrest Isayev!” among those crowds made the stakes clear.

Isayev complied with remarkable haste with the wishes of Japarov’s backers and ruled himself out of taking up the presidency, leaving the way open to the next person in line; namely, Prime Minister Japarov.

Although lawmakers are now putting an optimistic gloss on this seemingly inescapable turn of events, they were telling a different story only a few days ago. When the prime minister’s job was still up for grabs, some opposition politicians told reporters they were receiving grave threats from unknown elements presumed to be allied to Japarov.

Deputy parliament speaker Aida Kasymaliyeva told her colleagues on October 13 that she had come under intense pressure to back Japarov’s candidacy as prime minister.

Concerns about the soaring influence of the criminal underground has been voiced by international partners too. In a statement earlier this week, the U.S. Embassy in Bishkek lamented what it described as “the attempt by organized crime groups to exert influence over politics and elections.”

The tone for what is to come may have been set best of all by Prosecutor General Otkurbek Djamshitov. He told parliament that his office had no plans to pursue criminal proceedings against any members of the Matraimov family, whose shadowy role in Kyrgyz politics has lingered heavy over much of this crisis.

Rayimbek Matraimov, the lynchpin figure of that family, is widely believed to have deployed riches he amassed while serving as a senior customs service official to influence the outcome of the parliamentary elections. He has previously been accused of masterminding a vast smuggling operation.

Japarov made a faint nod in recent remarks to the possibility of initiating a formal investigation into Matraimov – something that anticorruption activists have long been demanding – but all such talk appears set to slip by the wayside.