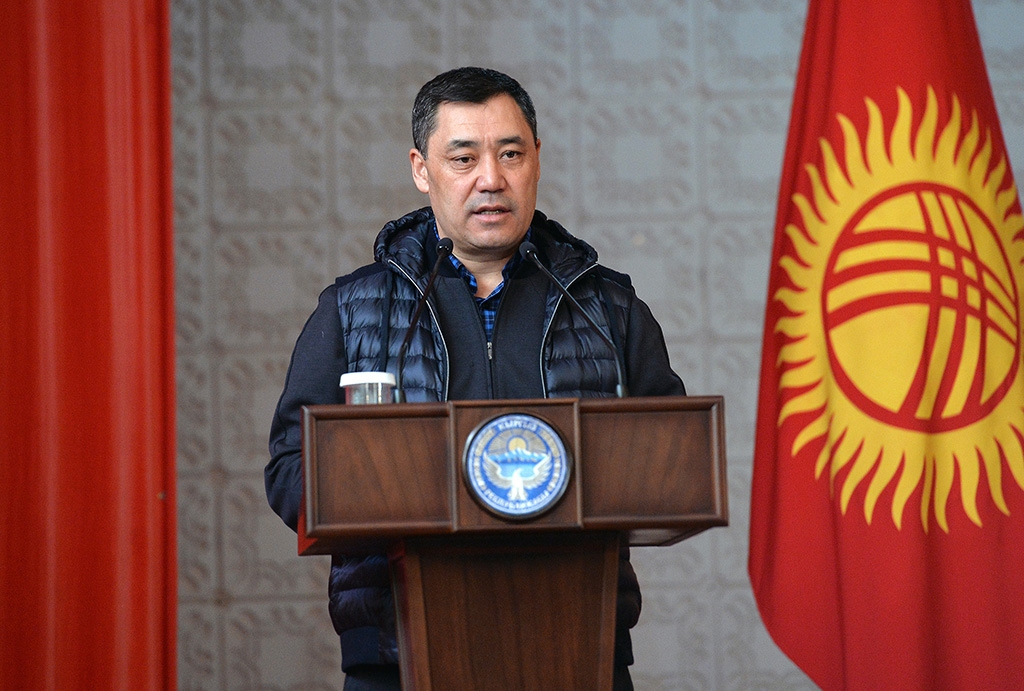 Kyrgyzstan’s president-elect is in a strong position domestically after romping home in a vote lacking heavyweight opponents. But his foreign game is looking weaker.

First, there was the confusion over which country he will visit after his inauguration on January 28.

For the moment, it appears that is Russia. Deputy Prime Minister Ravshan Sabirov said on January 25 that a visit to Moscow was “in the plans,” but he mentioned no date.

A trip to the Kremlin for Japarov was mooted earlier on, in October, by Foreign Minister Ruslan Kazakbayev. That visit never happened.

After he won his election earlier this month, Japarov surprised many by saying he intended to make his first foreign visit to Kazakhstan.

This would have been a break in tradition. The Russia visit is all but mandatory for new Kyrgyz presidents. The last three elected leaders made the Kremlin their first port of call after taking office.

But Moscow has taken a sniffy view on Japarov. Russian leader Vladimir Putin has described the October unrest that brought him to power as “a misfortune” and implied that Kyrgyzstan was getting ahead of itself by modeling itself on Western democracies.

“The level of political consciousness, the maturity of institutions is not the same as, say, in France,” Putin said in December.

A Kyrgyz delegation to Moscow led by parliament speaker Talant Mamytov in December received an apparent rebuke from Mamytov’s opposite number, Vyacheslav Volodin, who complained that “certain countries” made eyes at the West before “appealing to Russia when it gets difficult.”

Observers read this as a veiled dig at Kyrgyzstan, although in truth, the remarks were cryptic to the point of being impenetrable. Volodin was trying to insult somebody, but it wasn’t clear whom.

When Kyrgyzstan jettisoned its head of state for the second time in 2010, it had something new to offer the Kremlin: unfailing loyalty. Under Kurmanbek Bakiyev, who was ousted that year, Bishkek had proved a fickle partner, notably pledging to cancel the lease on an U.S. military base before reversing the decision when Washington upped the rent.

The Americans were gone by 2014. The following year, Bishkek tore up a strategic bilateral cooperation agreement with Washington amid a row over Azimjan Askarov, an imprisoned rights defender who died behind bars last year.

After Atambayev, it was the turn of his ally, Sooronbai Jeenbekov, a mostly dependable figure.

But there was one aberration that may have irritated Moscow. When Atambayev and Jeenbekov fell out, Putin interceded on Atambayev’s behalf, hosting both men separately for talks in July 2019. That development was thought at the time to have spared Atambayev imprisonment.

Jeenbekov then surprised everyone by having Atambayev arrested anyway the following month.

Russia is not short of leverage over Bishkek. Hundreds of thousands of Kyrgyz migrants work in Russia and enjoy labor market preferences over their Tajik and Uzbek counterparts.

In 2010, the Kremlin arguably hastened the downfall of Bakiyev by slapping tariffs on fuel. Sabirov, the deputy prime minister, noted that Japarov’s main aim on the trip would be to negotiate a discount on the price of gas purchased from Gazprom.

As Kyrgyzstan’s leading creditor, China is another important partner to consider. Here too, Japarov faces a challenge.

Fresh investment from China has been sparse in the last few years. This is hardly surprising. Beijing’s ambassador met with Kyrgyz officials several times at the tail-end of last year to discuss security for Chinese businesses after several Chinese-operated mines were attacked in the chaos that brought Japarov to power.

Japarov has suggested Kyrgyzstan pay off debt to China with mineral concessions.

Then there is the West, which has frowned on Japarov’s rise.

In a letter of congratulation to U.S. presidential election winner Joe Biden in November, Japarov hailed negotiations on a new bilateral cooperation agreement.

Restoring some version of the 2015 document could make it easier for Washington to provide Bishkek with aid, which was spared customs duties under that agreement. But any perceived strengthening of the U.S. relationship would not go unnoticed. Anti-Americanism is a recurring theme in Kyrgyz politics.

Moreover, U.S. ambassador Donald Lu has signaled that his mission will be even more of a stickler on governance than those of his predecessors. Bishkek decried external interference after Lu called on civil society to push for the convictions of underworld boss Kamchybek Kolbayev and former customs chief Rayimbek Matraimov, both of whom are object of U.S. sanctions.

The limited space for maneuver between giant powers might encourage Japarov to seek his comforts closer to home.

Uzbekistan, which was a hostile presence for Kyrgyzstan under the late President Islam Karimov, has become a reliable friend under Shavkat Mirziyoyev.

Tashkent got its Japarov congratulations in early, sending him a note on the day he was appointed acting prime minister.

Kazakhstan has been thornier for Kyrgyzstan. The larger, oil-rich country regularly makes life hard for Kyrgyz truckers on the border in what can appear like a selective response to smuggling.

The decision to nix plans to visit Kazakhstan was a clumsy snub.

“Seeing this behavior, partner countries will wonder whether it is worth dealing with a president who says one thing today and another tomorrow,” Akylbek tweeted. “This means we can forget about major inter-governmental projects."