The president’s new office complex will not, he insists, cost the state a penny. 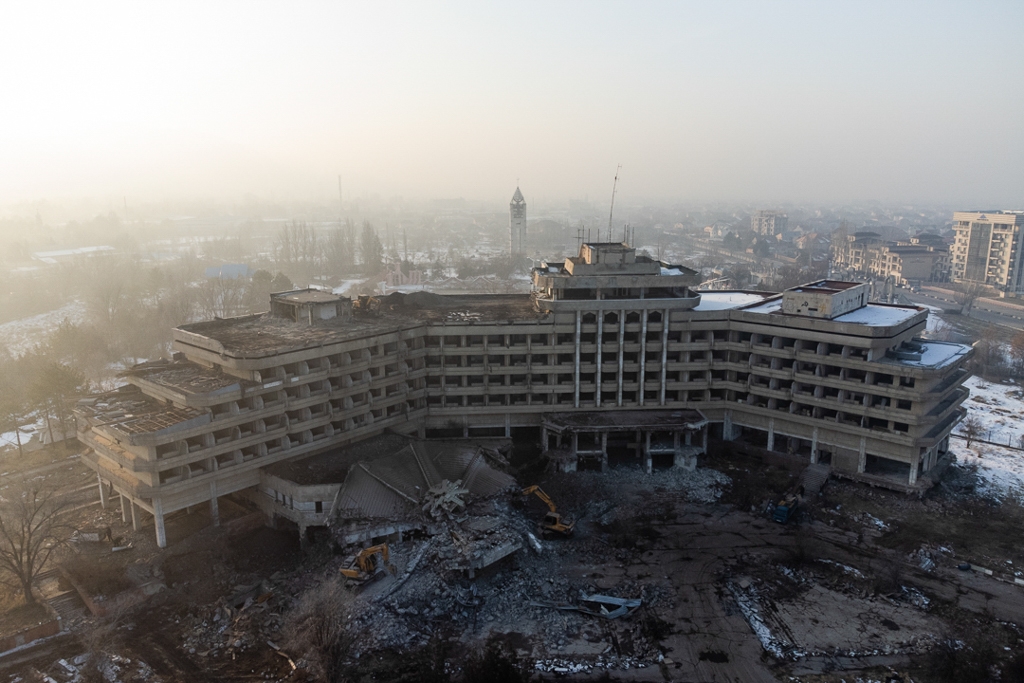 To build, Japarov must first destroy: His new office complex will occupy the site of the old Issyk-Kul Hotel. (photo: Danil Usmanov)

Kyrgyzstan’s president is in the mood for building.

On April 16, Sadyr Japarov oversaw the official start to construction of what should become a swanky new presidential administration complex in the south of the capital, Bishkek.

The site where these palatial digs are to arise used to be the home of the Issyk-Kul Hotel, which was stripped of its protected status in 2021 and torn to the ground.

In Japarov’s telling, building this complex is essentially a traffic-easing initiative. His current office stands in the stolid, gray Government House building in central Bishkek, a full 12 kilometers from his residence. Every time he goes to and from the office, many of the city’s key thoroughfares are brought to a standstill for reasons of security.

This new building will be only 2.5 kilometers from the Ala-Archa residence.

Japarov’s office said the 21,000-square-meter complex will also be a boon to bureaucratic efficiency.

“The construction of a new administrative complex will optimize the work of the central administrative apparatus, create conditions for more efficient management, accelerate the interaction of organizations, and optimize maintenance costs,” it said in a statement.

Mock-up images of the future building speak to modernity, all sleek lines and glass. Room will moreover be made for ample greenery and gushing fountains, as well as a helipad.

The creators of those pictures did, however, need to resort to some mild inspiration. As Kaktus news website noticed, some of the interiors depicted were lifted from stock design images.

What is most revolutionary about this project is that it will not, says Japarov, cost the state a penny. Private companies will shoulder the labor and expense in return for a 16-hectare plot of land by a river on the site of a now-demolished gunpowder warehouse.

“We’re giving them land, they’re making us a building,” the president put it succinctly.

Much about this arrangement remains unknown, however. What is the exact value of the land being given away? And who exactly are these contractors anyway?

Only the name of one company has come to light: TS-Group, a developer founded in 2014 and whose business model consists of building housing and then either selling it or exchanging it for older real estate.

The plan for this 16-hectare plot is for a multi-story building housing retail facilities, business centers, a sports grounds and a school.

Japarov’s spokesman, Erbol Sultanbayev, predicted in a Facebook post that the new complex would become the envy of visiting dignitaries.

“When visiting foreign countries, we always admire their administrative complexes and architecture. God willing, guests to our country will now look upon us with the same admiration,” he wrote.

This vision has predictably run into some criticism. Social media snipes have dubbed the complex a khansarai, evoking images of an ancient royal court. Others suggested the grounds could be set within a grove of wolf's-bane, an allusion to the poison plant that Japarov has recommended people take against COVID-19 infections.

Begayim Zamirbek, a Bishkek-based activist, told Eurasianet that she considers this whole idea wasteful and that not enough details are being divulged to the public.

“I think that the prestige of Kyrgyzstan should be proven through deeds, not by the size of buildings. Traffic jams can be solved by cheaper methods,” Zamirbek said.

Japarov doesn’t care for such gadflies. He has complained on Instagram, somewhat tongue in cheek, as evidenced by his use of a blushing emoji, that his critics are “meddlesome people” who would not “let him work in peace.”

Deputy Prime Minister Edil Baisalov was even more caustic, accusing Japarov’s detractors of being afflicted with a “poverty syndrome.” Japarov should instead be likened to great city-builders like Peter the Great, not needlessly attacked, he argued.

Sure enough, Japarov does have visions of building cities from scratch.

In July, the president’s office announced plans to build a city called Asman – Persian for “highest heaven” – in Japarov’s native Issyk-Kul region. As conceived by architects, this city would sprawl over 4,000 hectares in the shape of a komuz, a string instrument commonly used in Central Asian folk music, house 700,000 people and serve as a model of environmental harmony.

The initial idea was for the construction to be done by local developers, but the thinking is now to entrust the task to a group of French companies.

Ruslan Akmataliyev, the construction project manager for Asman, told RFE/RL’s Kyrgyz service, Radio Azattyk, on April 17 that investors are lining up to sink $20 billion into the still-notional city.

Environmentalists are appalled that there is even talk of such a massive development being mulled for the shores of Lake Issyk-Kul. Activists organizing to confound Asman suspect that the whole enterprise will be an excuse to steal money. A group of them has set up a movement called “No to building Asman.”

“A city is not just a bunch of multistorey buildings, it’s an object of infrastructure with its own factories and thermal power plants. This would be a disaster for the entire Issyk-Kul region. If we want to develop tourism, we need to develop a strategy, not Asman,” Ryspek Baizakov, a member of the movement, told 24.kg news website in January.