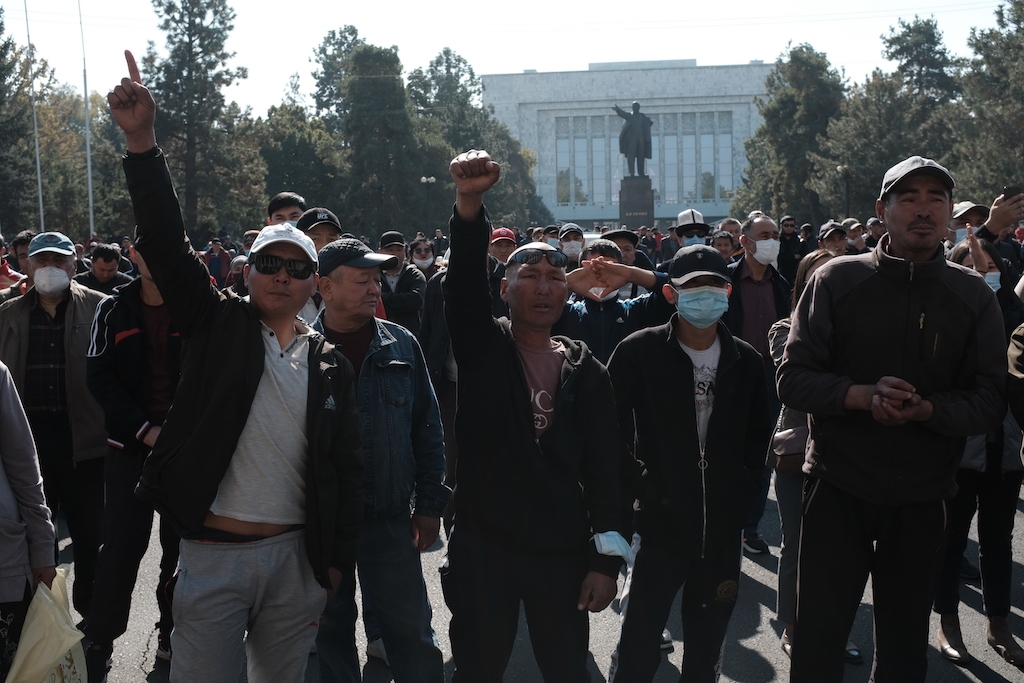 Lawmakers in Kyrgyzstan have after days of turmoil voted to appoint Sadyr Japarov, who was serving a prison sentence on kidnapping charges until only last week, as the country’s prime minister.

The embattled President Sooronbai Jeenbekov is expected to accept the nomination.

This development marks the success of a strategy of terror waged by Japarov’s backers, who have held days of rowdy rallies in the capital, Bishkek, and allegedly threatened dissenting members of parliament.

Even as parliament was deliberating Japarov’s nomination on October 14, many hundreds of his supporters were assembling outside the Government House in central Bishkek with the apparent intent to insure against any change of plan.

Japarov, who has extremely limited experience of any kind of government service, will now face the twin challenges of coping with the newly intensifying COVID-19 outbreak and the accompanying economic collapse.

“Dear deputies … I thank you for taking this step in the interest of peace for our people and for our state, and for stability. We will undertake every effort to reassert order, justice and lawfulness,” he said after the vote in parliament.

Meanwhile, President Jeenbekov seems for now to have survived with his position intact, albeit with his authority gravely undermined.

This fudge, whereby Jeenbekov and Japarov will end up somehow running the country in an uneasy tandem, is the outcome of a complicated series of maneuvers.

Questions had persisted until October 13 about who was to take over the vacant spot as speaker of parliament. This was important because it is the speaker who takes over the duties of acting president should the incumbent suddenly step down. If Jeenbekov had agreed to leave before the speaker position was filled, that job would have passed to whomever was prime minister – a job that Japarov has been energetically seeking for himself.

But members of parliament voted overwhelmingly in a session held at the Ala-Archa state residence, rather than the now-damaged legislature building, to place Kanat Isayev, the leader of the Kyrgyzstan Party, in that position.

This arrangement notionally deprives all actors in this political impasse from amassing too much power unto themselves.

The government that Japarov has managed to midwife into existence is arriving amid considerable and largely negative assessments from the international community.

The U.S. Embassy in Bishkek issued an unusually frank statement on October 13 to lament “the attempt by organized crime groups to exert influence over politics and elections.” The European Union on the same day raised concerns “about possible procedural flaws during the designation of the new prime minister.”

This last point was a reference to a previous two attempts by Japarov’s backers to convene parliament and force through his nomination in profoundly opaque and ominous processes. Deputy speaker Aida Kasymaliyeva said in a charged speech to her colleagues on October 13 that she had been on the end of grisly threats.

Addressing MPs’ questions before being nominated, Japarov denied that criminality would flourish under his government.

“There will be a fight against crime. Let us, as they do in developed countries, build a clean society,” he said.

Japarov also says that his own 11-year sentence for kidnapping no longer disqualifies him from high office as his conviction was, after he was sprung from prison, quashed by the Supreme Court pending a review.

A decisive role in bringing the drama to a close for the time has also been played by Russia. President Vladimir Putin’s deputy chief of staff, Dmitry Kozak, traveled to Kyrgyzstan on October 12 to lend support to Jeenbekov and broker a truce between political foes. Kozak met with both Jeenbekov and Japarov during his visit.

Even as temperatures are cooling, anxious uncertainty will prevail about what the future will bring.

The discredited October 4 parliamentary elections that triggered this whole crisis will have to be replayed at some stage, which may well renew political tensions and revive mutual accusations of foul play.

The dramatic collapse of the economy is going to add misery to a population already afflicted by widespread poverty and corruption.

And the healthcare system looks no better equipped to cope with an incipient second major wave of coronavirus infections than it did when the outbreak first struck in the spring.