If he stays away from the country, he'll become just the latest exiled ex-president. 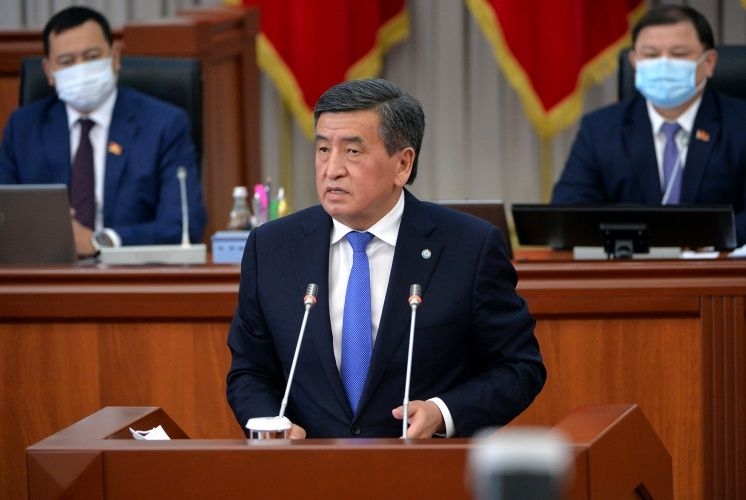 Will Kyrgyzstan ever become a comfortable home for its former presidents?

Last October, Sooronbai Jeenbekov became the third Kyrgyz leader in history to be ousted by political upheaval. The early signs that he would be able to retire in peace were encouraging.

One day after his resignation, Jeenbekov appeared alongside then-interim successor Sadyr Japarov before lawmakers. Before leaving the room, he made a short speech that was met with friendly applause.

Last month, he attended the inauguration of Japarov, who had by then been elected in a landslide vote. Another attendee was Roza Otunbayeva, who briefly served as president in 2010, but only in a temporary caretaker capacity.

Before that, Japarov had poured cold water on talk of reprisals. Jeenbekov’s complicity in serious crimes “had so far not been identified” Japarov said in November in perhaps less than fully reassuring terms. It was, after all, important that Jeenbekov retain immunity in order to ensure a “peaceful transfer of power in future,” Japarov said.

That is not the norm in Kyrgyzstan. Two former heads of state live in exile. Another is in prison.

Something now appears to have changed. Jeenbekov this week jetted out of the country, and the incentives for him to remain abroad are piling up.

On January 29, a lawyer for a former Cabinet official, Duishenbek Zilaliyev, told media that she was demanding the former head of state take the stand to testify in her client’s illegal enrichment case. The court later confirmed to Eurasianet that it had granted the defense’s request.

This is an alarming development for Jeenbekov, because Zilaliyev has alleged that $1 million found in his bank account by investigators were intended for Jeenbekov’s 2017 presidential campaign.

Jeenbekov’s lawyer said he had nothing to do with the case and was not obliged to show up.

Another ominous development is the criminal complaint filed last month against the former president by victims of police violence on the night of October 5, when clashes left one dead and hundreds seeking treatment.

On February 2, the state prosecutor said that it had handed the complaint over to the Interior Ministry and the State Committee for National Security, or GKNB, to determine whether to open a case.

Jeenbekov’s departure was reportedly based on tip-offs the following day, before his former press secretary stepped in to claim that the former president and his wife were performing a pilgrimage to Mecca at the invitation of the king of Saudi Arabia.

The trip had been planned since November, the spokeswoman said, but was delayed due to the pandemic. He is set to return before the end of next week, she assured.

While no reference was made to other family members joining the trip, it is widely understood that Jeenbekov’s once-influential lawmaker brother, Asylbek, and other relatives have gone along for the ride.

The last time there was such a buzz surrounding a former leader’s travel plans was when Jeenbekov was in power and locked in a struggle with his own predecessor, Almazbek Atambayev.

Just as Jeenbekov’s representative name-dropped the Saudi king, Atambayev was at pains back then to show that he had friends outside the country. In 2018, he joined former leaders from other countries attending a congress in China at the invitation of Chinese leader Xi Jinping. Atambayev met Xi on the sidelines.

The following July, Atambayev went to Moscow to meet with Russian President Vladimir Putin in what was read at the time as the Kremlin interceding to spare Atambayev, a stalwart Moscow loyalist, from punishment.

It was to no avail. By August, Atambayev was in jail on charges of conspiring to release a mob boss – a crime that later saw him sentenced to 11 years in prison.

Jeenbekov will be aware that the death of 19-year-old protester Umutbek Altynbek uulu during clashes in October leaves him similarly vulnerable, his denial that he ordered the crackdown notwithstanding.

Atambayev’s fate was sealed by a June parliamentary vote to strip him of presidential immunity.

He committed an act of self-harm just before that vote by comparing the lawmakers to snot.

Jeenbekov is unlikely to insult the legislature in such a way.

But the key fact as far as he is concerned is that the same crop of lawmakers who were once overwhelmingly loyal to Atambayev before transferring that loyalty seamlessly to him now serve a different master.

Kyrgyzstan’s most recently deposed president would be unwise to bank on them saving his skin.