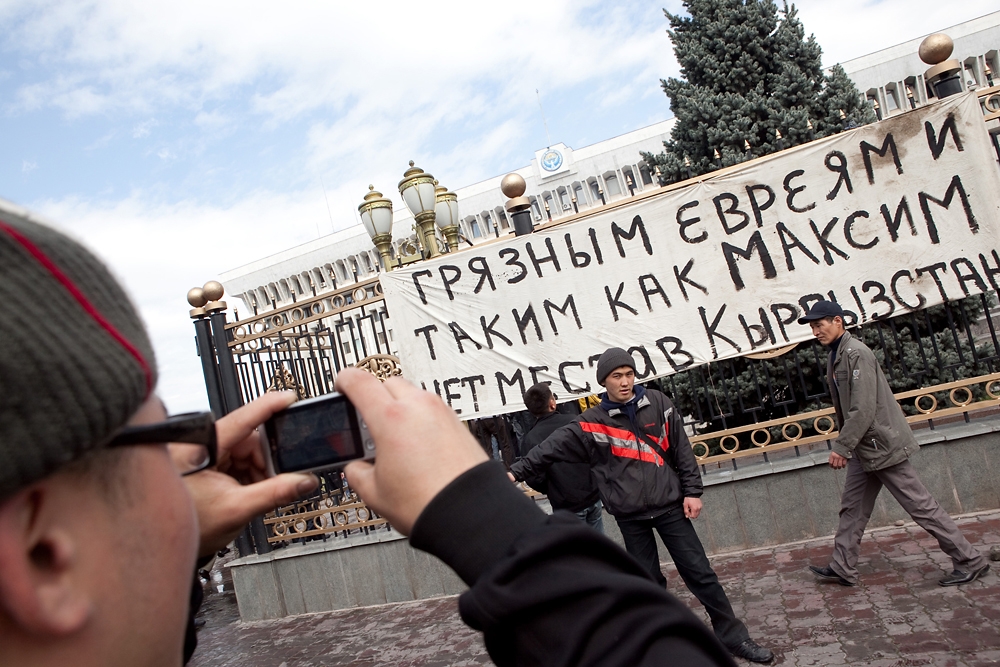 A rare occurence: an anti-Semitic slur seen during the 2010 overthrow of Kurmanbek Bakiyev. (Photo: David Trilling)

When 37-year-old Georgii Kolotov was growing up in Bishkek during the last decade of the Soviet era, he was largely unaware of a Jewish community. There were more than 10,000 Jews living in Bishkek at the time, but for young Kolotov and most other Jews, there was little sense of a distinctly Jewish identity.

There were no Jewish celebrations or social gatherings, and Kolotov was unaware of the covert synagogue. The only thing that gave him a feeling for what it meant to be Jewish was family visits to his grandparents’ graves in a small cemetery on the outskirts of the city. There he saw the surrounding headstones also bore six-pointed stars. Kolotov didn’t fully understand it at the time, but as he grew up it became clear: in spite of its official ideology of internationalism and friendship of peoples, “the Soviet Union didn’t welcome different ethnic communities,” he said.

Bishkek’s Jews, like those in many other parts of the former Soviet Union, observed their rituals quietly, or in secret. The Soviets’ anti-religious policies meant Bishkek’s lone synagogue, which has operated in its present location since the 1950s, was tucked away in an ordinary house in an ordinary neighborhood. It wasn’t just the synagogue that hoped not to attract attention: some Jews feared anti-Semitism – at times almost state policy in the USSR – and hid their heritage.

A lot has changed since 1991. The collapse of the Soviet Union unleashed a massive wave of emigration, leaving the community roughly one-tenth of its Communist-era size. And most of those remaining in Bishkek are elderly. Yet, for those still in Bishkek, there is far more room for religious expression.

In 2000, Chabad-Lubavitch, a New York-based Hasidic Jewish organization that provides spiritual and social support to Jewish communities worldwide, responded to the community’s request and sent a rabbi from Israel to minister to believers – the first real rabbi in the community’s history. Several Jewish organizations, local and international, have also established roots in Bishkek, and Jewish children can now attend Pri Etz Chaim, a Jewish day school. The community even has its own monthly newsletter.

But after years of economic stagnation, two revolutions, and a bout of ethnic violence directed at another minority, many Jews are weighing their options about their future in Kyrgyzstan.

“There was a time when [my wife and I] wanted to leave for Israel, where I have a lot of relatives,” said Leonid Zelichenko, 80, a retired police colonel and journalist who writes, edits, and publishes the Maayan (“Spring of Water”) newsletter. “But all my children and grandchildren are married to non-Jews and we live as one big family here. I will never leave and break these connections.”

Zelichenko’s story is typical of many older members of Kyrgyzstan’s Jewish community. Born in Gomel, Belarus, in 1933, he and his family were evacuated to Kyrgyzstan in 1941 during the darkest days of World War II. These wartime evacuations swelled Bishkek’s Jewish population – which was small, consisting mostly of Bukharan Jews, a community that thrived on the Silk Road – to 40,000 or 50,000 people. Though many returned to Europe after the war or emigrated to Israel through Poland, Zelichenko’s family stayed behind. They found in Kyrgyzstan a comfortable climate and a hospitable local population with virtually no history of anti-Semitism, something uncommon in other parts of the Soviet Union.

Rabbi Arie Raichman, the emissary from Chabad-Lubavitch, notes that Jews who came to Kyrgyzstan during the mid-20th century were able to make significant contributions to the development and culture of the republic thanks to locals’ tolerant attitudes.

Today, that tolerance is encouraging another development: People whose families once hid their Jewish ancestry for fear of the Soviet state are rediscovering their roots and embracing their pasts. “Maybe their grandmother tells them, maybe they find some photographs, maybe they find some documents,” Raichman said. “And when they discover their heritage they want to know more.”

Zelichenko, who has a historian’s knowledge of the community, believes that these rediscoveries, alongside an increase in mixed marriages and a noticeable growth in the Jewish birthrate, will keep the community from shrinking as it did in the past. He maintains his optimism in spite of several recent anti-Semitic incidents. In April 2010, amid civil unrest that followed the overthrow of President Kurmanbek Bakiyev, a banner using an anti-Semitic slur to refer to Bakiyev and a close associate was unfurled on the fence of the government headquarters in Bishkek; the synagogue was attacked twice that year, causing minor damage.

Both Raichman and Zelichenko agree that the situation has calmed significantly since then.

Still, for many Jews, young and old, the pull of emigration is strong and has little to do with anti-Semitism. Kyrgyzstan’s economy has little to offer. And many want to reunite with family in Israel or elsewhere. But many fear what they could lose. Svetlana Margolis, who works in IT, was offered a job at an Israeli firm in 1997, but declined despite the better pay. “Here we are specialists, but there we would be no one,” she said.

Kolotov had a similar opportunity that same year and also turned it down, even though all his relatives live in Israel. Kolotov is seen as a pioneer in the field of digital filmmaking in Kyrgyzstan. He, too, was concerned he would lose more by emigrating than he would gain. But he still worries that future circumstances may force him to leave.