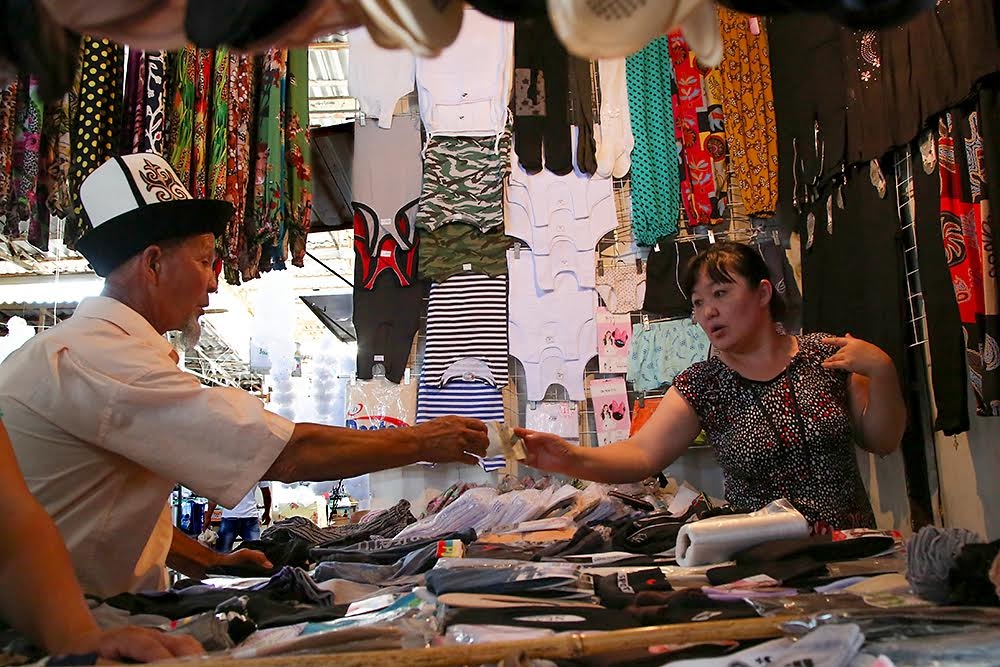 A shopper pays for wares at a clothing stand in a market in the town of Kara-Suu on August 7. With Kyrgyzstan’s full membership to the Russian-led Eurasian Economic Union, prices for goods from member countries will decrease while prices for goods from China, Turkey, Iran, and other major non-member exporters stand to go up. (Photo: Peter Leonard)

After months of stops and starts, Kyrgyzstan is finally becoming a full-fledged member of the Russian-led Eurasian Economic Union.

With that, the country has entered what boosters of the bloc hope will be a period of economic recovery. Everybody else seems uncertain of what to expect.

“We’ll live and we’ll learn,” said Azim, a resident of Kara-Suu, a southern market town whose prosperity has for years relied on the sale and trade of imported goods. “As for me, I think it will be good, because the flour from Kazakhstan will be cheaper.”

Along with bakers, better times may be coming for anybody whose costs will be reduced by the disappearance of import duties on goods from the other four EEU members – Russia, Kazakhstan, Belarus and Armenia.

But a desire to foster trade may not have been the primary consideration as Kyrgyz leaders mulled accession to the EEU. Speaking at a discussion panel in Bishkek in late July, Temirbek Azhykulov, executive director of the International Business Council, an informal association for the foreign investor community in Kyrgyzstan, said that membership appeared primarily motivated by politics.

Azhykulov said his organization has spent the last year reaching out to officials and entrepreneurs to address a knowledge gap on how the new raft of regulations will affect the business sector, but to little avail. “As of now, we don’t have the kind of information that could help us give guidance to companies that, say, work in trade. To tell them: ‘These are more or less your prospects,’” Azhykulov said.

The immediate impact of accession will be felt along the border with Kazakhstan, where customs controls are to be lifted imminently. Kyrgyzstan’s Economy Minister Oleg Pankratov said on August 6 that nothing will change until August 11-12 due to some final bureaucratic issues.

Once that happens though, freight will sail through, bringing an end to the sight of long lines at the border. “It won’t be necessary to fill out any customs declarations, there won’t be any more customs procedures,” Pankratov was quoted as saying by Vecherny Bishkek newspaper. “Exporters will simply have to go through a simplified form of registration carried out by the border service.”

It will be a different story with imports from non-member countries, which account for much of the stock in Kara-Suu market: shoes and clothes from Turkey, cleaning goods from the Middle East, nuts from Iran.

And, of course, there is China. Trucks loaded with anything from electronics to car parts and fabrics to toys rumble 250 kilometers to Kara-Suu down a steep and freshly paved road from the high-altitude Irkeshtam border crossing. Prices for all those Chinese wares stand to go up, which has fostered concerns the EEU is little more than a vehicle to service Moscow’s economic interests. “This will be a Russian market, they’re just opening a market for themselves,” said Shavkat Kasimi, an Afghan-born import broker based in southern Kyrgyzstan. “They won’t let anybody else in.”

Kasimi said goods intended for import may sit idle for weeks at customs points as Kyrgyz officials get up to speed on how to properly process them under EEU rules.

Russia has been eager to cast Kyrgyzstan’s accession to the EEU in a positive light. Sputnik, a Russian government-owned news website that acts as a platform for often strident state propaganda, carried an article in early August citing a Kyrgyz businessman as saying the lifting of customs controls would have instant, positive effects. Rustam Matkadyrov told Sputnik that as soon as he is able to cheaply import high-quality flour from Kazakhstan, the pasta factory he has built will be able to get going. “The cost of production will be greatly reduced and the removal of customs barriers will open up a huge market,” Matkadyrov said.

Pankratov, the economy minister, said government coffers will enjoy a windfall as Kyrgyzstan stands to receive 1.9 percent of customs fees gathered collectively by the economic bloc. “This is a very good figure, which will earn the budget a lot of money. The figure of 1.9 percent is set for three years, after which it will expire and be revised depending on what kinds of goods were exported,” Pankratov said.

Officials with the Eurasian Economic Commission – the regulatory body of the EEU – are more sanguine about the developments to come. Addressing several government representatives at a roundtable in Bishkek in mid-July, the deputy head of the commission’s macroeconomic policy department, Andrei Lipin, said it would take five years to fully assess the impact of Kyrgyzstan’s EEU membership on trade. Weak data-gathering has made evaluating long-term economic impact problematic, Lipin said. “The lack of quality information is very strongly felt,” he said.

There is some consensus about some of the more immediate effects.

With the introduction of an EEU common external tariff, prices across the board are likely to increase. Prime Minister Temir Sariyev predicted last year, while he was serving as economy minister, that average retail prices could increase by 10-15 percent following EEU accession. That rise will be above the average figure for automobiles and electronic wares.

Were there broad support for EEU membership, authorities might be confident in riding out the political fallout of such an effect, but opinion polls are discouraging. An annual survey on Eurasian integration conducted by the Eurasian Development Bank in 2014 showed that support for EEU accession in Kyrgyzstan had fallen to 50 percent from 67 percent in the space of a year. “The level of negative attitudes has doubled, which is a worrying sign,” the bank said in a statement detailing the survey results.

The next few months are likely be a politically sensitive time for Kyrgyzstan, as parliamentary elections beckon. Such a vote would be a formality in most Central Asian nations, where the executive branches of government tend to dominate the legislative. But Kyrgyzstan is ostensibly a parliamentary republic, and rival political forces in the country are sure to try to politically capitalize on any downturn in quality of life.

The man on the street is content for now to shrug his shoulders. “They’ve made their plan and it’s according to that plan that they’ll operate,” said Kasimi at Kara-Suu market. “In the end, we’ll see if it works.”