Was it an attempt to scare journalists away from the affairs of government officials, or something even more conspiratorial? 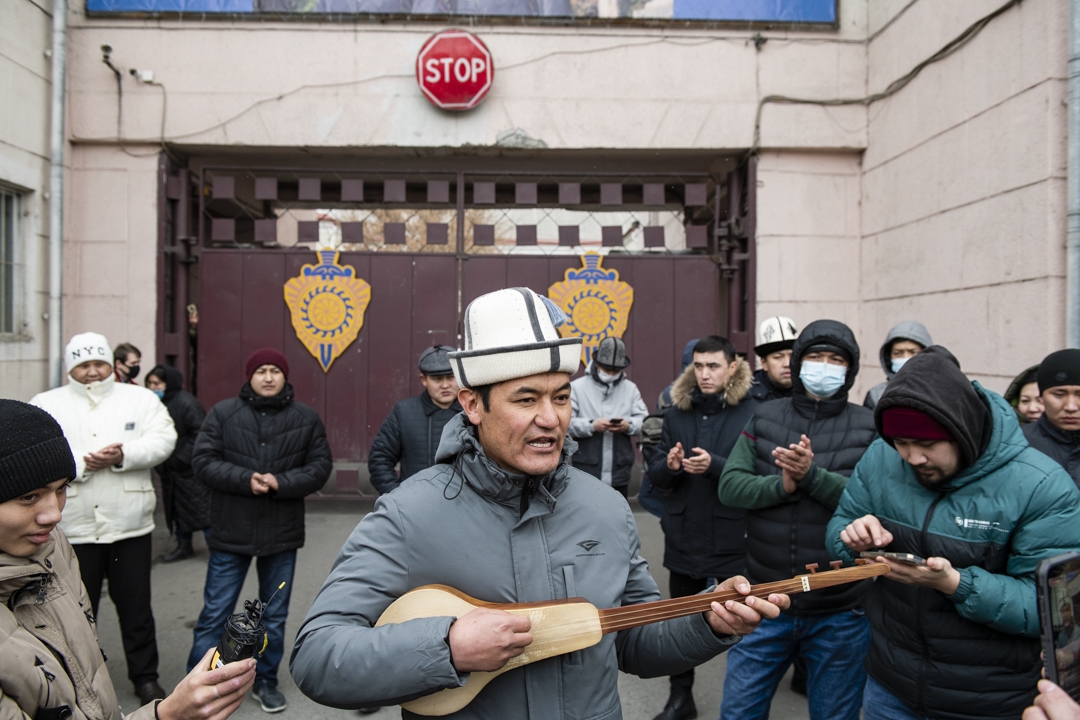 Outside the Interior Ministry on January 23, a folk musician sings in support of his jailed colleague. (Danil Usmanov)

An investigative journalist in Kyrgyzstan was detained on drug charges over the weekend, just two days after releasing a report into how a nephew of the head of the security services is allegedly profiting from the private resale of oil produced by a state enterprise.

Masked and armed troops with the Interior Ministry stormed Bolot Temirov’s offices in Bishkek without warning on January 22, knocking the reporter and his colleagues to the ground. They later claimed to have found a 7.7-gram bag of hashish in Temirov’s pockets.

Temirov insisted to journalists as his detention was taking place that the drugs had been planted. Police officers also confiscated computer equipment and hard drives from the premises.

The politician and fellow investigative journalist Ali Toktakunov said the raid was a clear attempt to scare journalists away from looking into the affairs of government officials.

“Our colleague Bolot Temirov was detained as if he was a terrorist. Even major corrupt officials and criminals aren’t detained like this in Kyrgyzstan. Instead of fighting corrupt officials, the authorities are fighting against those who oppose corruption,” Toktakunov said.

Another Bolot was arrested at the offices of Temirov Live, as the reporter’s outfit is called. Bolot Nazarov, a well-known folk artist, has penned songs criticizing the head of the State Committee for National Security, or GKNB, Kamchybek Tashiyev and composed musical accompaniments to Temirov’s video investigations.

Officials claimed Nazarov had 8.7 grams of hashish on his person. They also circulated a video of a person they implied was Nazarov together with a woman using a water pipe to smoke drugs. The authorities say they acted after the woman in the video complained that a person named Bolot – it is not specified which one – pressured her into consuming the drugs.

Even this story began crumbling within hours. Tashiyev gave a late-night press conference to admit that no drugs had been detected in Temirov’s blood stream, although he said Nazarov had failed a drugs test.

Tashiyev also sought to address the welter of mocking abuse directed at law enforcement officials for their decision to seize computer equipment during what was little more than a small-scale drug raid. Police confiscated the equipment because they may contain proof of whether Temirov or Nazarov were engaged in drug trafficking, he said.

“Those computers probably have information about where they get these drugs, what types of drugs they get, how much they pay,” Tashiyev said.

Temirov’s defenders suggest a more likely explanation is that the authorities were seeking to track down the source of the information reported about Tashiyev’s nephew.

In the early hours of January 23, while Temirov and Nazarov were still in custody, several hundred people gathered outside the headquarters of the Interior Ministry. Demonstrators shouted slogans like “Shame on the police” and “Tashiyev go.” Another chant was a play on the words “Temir,” which means iron in Kyrgyz, and “Tash,” which means stone; those are popularly used monikers for the journalist and the GKNB chief, respectively: “Temir is getting stronger, Tash is breaking.”

Tashiyev was candid about the likely ulterior motivation for the raid of Temirov Live’s offices. He said that law enforcement poring through the contents of Temirov’s computers would also be looking for any evidence that the journalist was writing articles on order for unspecified interests in the West.

On January 23, Bishkek district court ruled to find Temirov’s detention unlawful and ordered his release from custody, but with instructions not to travel. Nazarov was placed under house arrest.

This whole episode has had the inadvertent effect of causing views of Temirov’s recent investigation to shoot up. The central claim of that video is that relatives of Tashiyev used their access to state-owned petroleum enterprises to redirect products to markets abroad at an inflated price, in effect leaving less of fuel available at subsidized rates for local motorists. Temirov has alleged Tashiyev’s nephew, Baigazy Matisakov, played a central role in this scheme.

Tashiyev categorically denies all claims of corruption and wrongdoing by himself or his relatives. Matisakov is an upstanding person who recites his prayers five times a day, he said.

Although this appears like a seemingly crude case of a security services boss going after a gadfly, even Temirov himself has offered a more conspiratorial explanation. His detention was carried out, after all, not by the GKNB, but by the Interior Ministry, over which Tashiyev does not wield direct authority.

Temirov suggested his arrest has been ordered by somebody seeking to hamstring Tashiyev, who is said to enjoy a sometimes-strained relationship with his long-time ally and friend, President Sadyr Japarov.

“The reality of Kyrgyzstan is that law enforcement agencies carry out orders from above. My detention was directly related to the investigation, but according to one theory out there, Tashiyev was being set up, because it would be stupid to detain me immediately after the release of the investigation,” Temirov said.