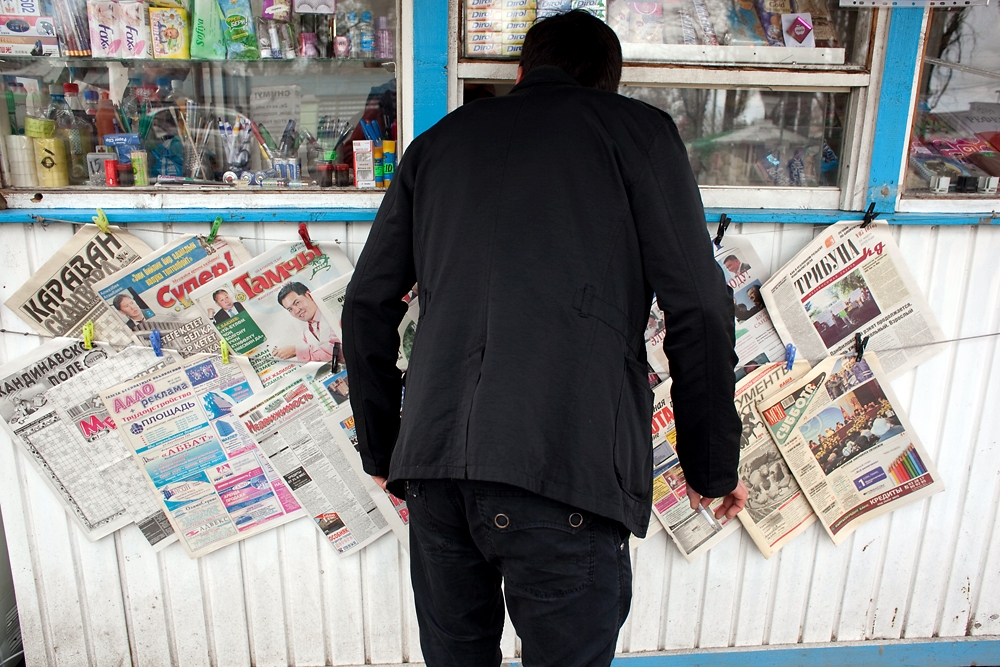 Amid a lingering climate of fear hanging over southern Kyrgyzstan, journalists there are embracing a Soviet-style survival tactic: rather than run the risk of reprisals for writing freely, they are self-censoring and reporting only on what are considered safe topics.

Appearances can be slightly deceiving when it comes to gauging the operating environment for reporters in Kyrgyzstan. Reporters Without Borders, in its 2013 World Press Freedom Index, indicated that Kyrgyzstan’s media climate is the most favorable in Central Asia, ranking it 106th, out of the 179 countries evaluated. Tajikistan was the next best, coming in at 123rd. Kazakhstan ranked 160th, Uzbekistan 164th and Turkmenistan 177th.

The Reporters Without Borders report looks at Kyrgyzstan as a whole. Local observers, however, say that conditions in the northern and southern sections of the country are markedly different. Southern Kyrgyzstan was the scene of widespread inter-ethnic violence in 2010 and tensions have remained high there since then, with ethnic Uzbeks feeling particularly skittish. Given the situation, the quality of journalism in the region is suffering, according to a Bishkek-based media watchdog, called Journalists.

“The sad reality is that journalists in southern Kyrgyzstan try to defend themselves by heavy self-censorship,” Aigul Matieva, a media lawyer and attorney for Journalists, told EurasiaNet.org. “Media people do not dare to write openly about their concerns, as they are low-paid and vulnerable.”

Local officials in southern Kyrgyzstan deny that the media climate is repressive. “The government does not interfere in work of journalists,” Kamil Sydykov, the head of the Osh Mayor’s Press Service, told EurasiaNet.org. “They decide how they write and what they write about. We do not control them, and do not give them instructions.”

Journalists in southern Kyrgyzstan contend that authorities don’t need to be heavy-handed because, based on what has occurred in the region over the past two-plus years, it’s easy for anyone to anticipate what can happen to those who contradict the official line. Cholpon S., a local journalist from Osh, who asked to change her name for security reasons, readily admits that she avoids writing anything critical of the policies and practices of government officials, both on the local and national level.

“I have a feeling that all critical materials are being monitored by Kyrgyz authorities, therefore I, like most of my colleagues, stay away from reporting on political, nationalism or corruption issues,” Cholpon told EurasiaNet.org. “If you criticize authorities, you may end up being questioned by a National Security Committee officer in a best-case scenario. Writing stories about growing nationalism is more dangerous, as an angry mob can attack for you being unpatriotic.”

Cholpon is not an exception as many journalists admit to being concerned about their personal security. Stanislav Polishuk, a freelance reporter based in Osh, says journalists self-censor their stories because they realize “in case of trouble nothing can protect him or her.”

“Unfortunately, the law may not always be a reliable protection, as quite often interviewees speak off the record, or ask not to mention their family names. And without making references to sources, a reporter can’t justify and prove his or her critical materials,” Polishuk told EurasiaNet.org.

Begaim Usenova, the head of Institute for Media Policy in Bishkek, says the threat of lawsuits is a significant factor in media self-censorship. Kyrgyz courts are not deemed independent and officials have been known to use the judicial system to enforce their political will. An easy way to get revenge against a journalist or media outlet that riles a member of the political elite, then, is for that power-broker to file a lawsuit.

“In 2012, the Institute for Media Policy participated in 24 court trials and registered 8 acts of violence against reporters,” Usenova told EurasiaNet.org. “When former or incumbent state officials or lawmakers claim damages while suing journalists, they ask for over million soms (approximately US $21,200), which shows that they do not seek refutation, but rather want to shut down a certain media outlet.”

Usenova went on to note that a Kyrgyz parliamentary resolution, which prompted a ban on the Russian-language news service Ferghana News, has had a chilling effect on local journalists. “In June 2011, the National Parliament, while discussing the temporary parliamentary commission investigation of the results of the tragic 2010 events, passed a resolution and ordered the Government to take measures to block [Ferghana News],” Usenova explained.

“Consequently, following the resolution, in February 2012, the national communication provider “Kyrgyztelecom” restricted access to the site for residents of this country, without having either legal right or without any judicial decision.”

“Kyrgyzstan is a member of the OSCE, and lawmakers of the national parliament should not take decisions to restrict the freedom of the mass media, including Internet media outlets,” Usenova added. International media watchdogs also have assailed Kyrgyz authorities over the ban, and Ferghana News representatives have brought a pair of lawsuits seeking to lift the restriction and enhance press freedom.