The Eurasian Economic Union was supposed to ease cross-border trade. Truck drivers waiting in dayslong lines say it has made the border checks worse. 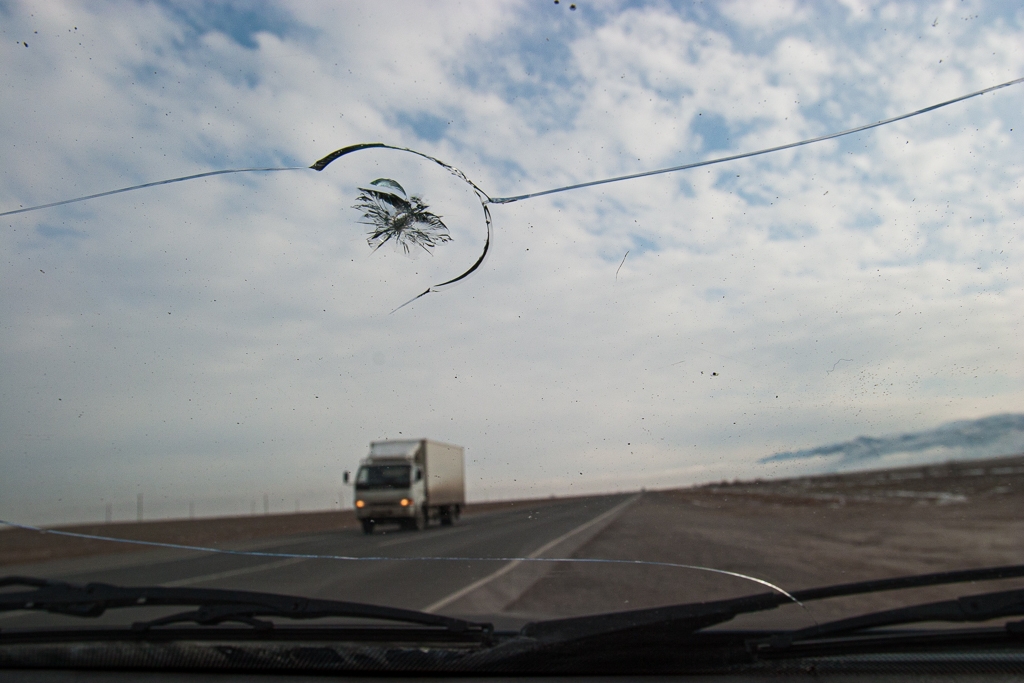 For truck drivers, it was faster to cross the border before both countries joined the free trade bloc. (David Trilling)

Large numbers of trucks have for weeks been lining up at the border between Kazakhstan and Kyrgyzstan, further mocking discredited forecasts about the Moscow-led Eurasian Economic Union ushering in an era of frictionless regional trade.

The heavy vehicles began to pile up at the Ak-Tilek checkpoint, around 35 kilometers from the Kyrgyz capital, Bishkek, in late December. Some drivers have been there for days, some for weeks.

The problem is the slow inspections by Kazakh customs officials, say drivers.

Azamat Nadyrov, 51, who is from Kyrgyzstan, transports edible and household goods, items that tend to undergo the most rigorous checks.

“I’ve been waiting here for three days without sleep. The moment you go to sleep, somebody [another driver] passes you,” he told Eurasianet.

Nadyrov is angry and exasperated that the governments of Kazakhstan and Kyrgyzstan cannot come to an agreement on cross-border cargo traffic and that drivers have to suffer as a result.

“We [Kyrgyzstan] entered the EAEU on the understanding that if the goods were cleared through customs in Kyrgyzstan, they would be able to freely move throughout the union. But now they are just putting pressure on our country. Nobody respects us,” he said.

No facilities are provided for people made to wait days. The only refuge from the cold weather is a nearby café. That is also the only place drivers can go to the bathroom.

This is a recurring issue. The accumulation of trucks at the Kazakh-Kyrgyz border has been occurring repeatedly since 2017, when Kazakhstan first instituted a bolstered inspection regime for heavy-duty vehicles.

Kyrgyzstan has appealed to the World Trade Organization and the Eurasian Economic Commission, the permanent executive body of the EAEU, but that has only resulted in accusations from Kazakhstan about Bishkek conniving in and turning a blind eye to the smuggling of goods from China.

Those charges do not appear to be without basis. Recent investigations by a consortium of outlets – comprising RFE/RL’s Kyrgyz service, which is known as Azattyk, the Organized Crime and Corruption Reporting Project and Bishkek-based news website Kloop – have done much to document the shady operations of the Kyrgyz Customs Service.

Kyrgyz authorities have denied that smuggling is a problem within the system, however, and insist that the issue lies only with isolated bad actors.

In March 2019, the lines of trucks at some stages stretched to as many as 140 units. Following bilateral negotiations, those queues melted away, only to reappear in May, when eyewitnesses reported seeing 50 vehicles standing at any given time.

Olzhas Otar, a spokesman for the state revenues committee at Kazakhstan’s Finance Ministry, said in televised remarks that their inspection regime was all about combating smuggling. Drivers often provide documentation for one type of goods, but other things altogether are discovered inside the vehicle upon checking, Otar said.

Otar said that the manifests are often misleading too, suggesting that the truck is headed for Russia, when it is in fact destined to remain in Kazakhstan. That is important because if and when the goods are sold in Kazakhstan, the government does not generate any sales tax revenue.

To address this problem, the two governments have agreed to implement a system of electronic tracking seals that permit border personnel to keep tabs on where goods are ultimately being unloaded.

But the Kyrgyz government has said the two sides cannot reach any consensus on how the system will actually be implemented.

“These bilateral measures on ensuring the traceability of goods only make sense when the parties clearly agree on the mechanism for their application,” the Foreign Ministry said in January, without specifying the nature of the sticking points.

Political analyst Denis Berdakov said it would be unfair to blame the EAEU for this impasse, and that the problems are all caused by mistrust between the countries involved. The problem will only be solved once the EAEU introduces a union-wide digital tracking system.

“This problem shows the weakness of state institutions. But sooner or later, as the digital footprint is introduced, it will all disappear. When there is a unified system, all government agencies will be able to see where goods are coming from,” he said.

Kyrgyzstan’s own digital database system has been delayed for years by irregularities with the tendering process and allegations that a former deputy minister pocketed funds intended for software development.

What particularly irks drivers at Ak-Tilek though is that it was right after Kyrgyzstan’s accession into the EAEU, which happened in August 2015, that inspections became stricter.

“When there was no union, we crossed this border in five-six hours, and that seemed like a long time then. Now, you can stand around for weeks,” said Nadyrov.

For Kyrgyzstan, Kazakhstan is their only access corridor to markets in Russia and Europe. Even if this latest hold-up is resolved through negotiation, it will only be a matter of time before the problem resurfaces.

“They do not understand what is happening, but ordinary people are suffering,” said Oleg Serebryakov, another driver. “We talk to one another [over the radio]. Everybody is complaining and angry, because for days they have to wait without moving.”