Kyrgyzstan: Kingmaker lurks behind curtain as politics heat up

Matraimov and his money are said to have lain behind the rise and fall of many a top politician. 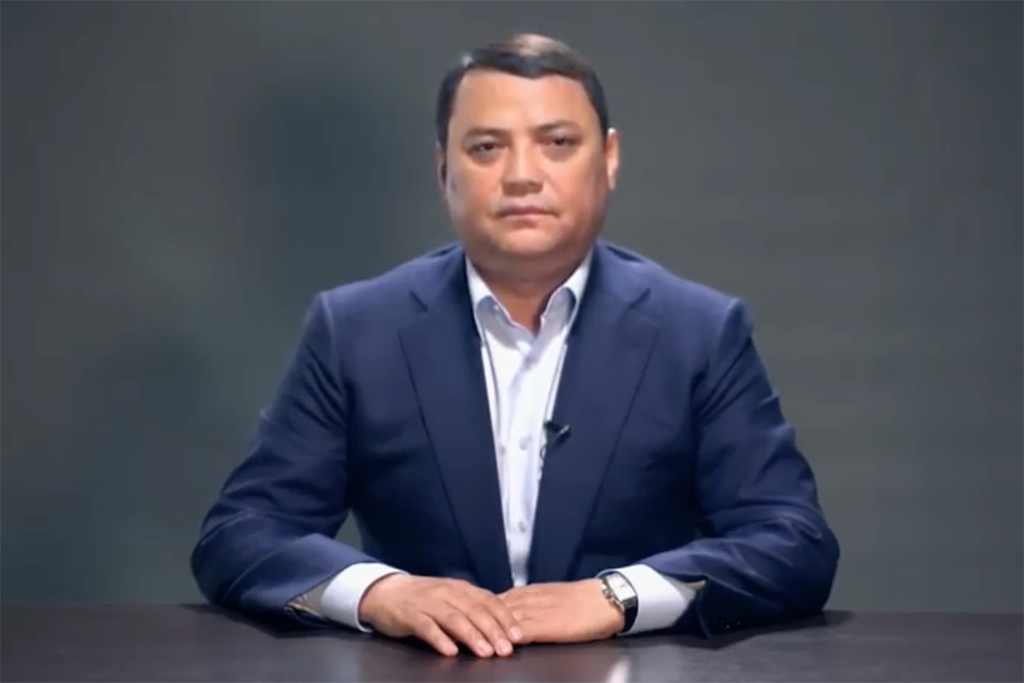 Screengrab from Rayimbek Matraimov's address on May 13. (YouTube/Новостной Портал Life)

In the southern Kyrgyzstan village where reputed kingmaker Rayimbek Matraimov grew up, he is viewed as a hero, not a thief.

Matraimov, 48, began his career in the customs service in 1997 as an entry-level inspector. He rose through the ranks to become deputy head of the service in 2015. Two years later, he was abruptly dismissed, a decision that he successfully appealed without seeking reinstatement.

If the résumé looks bland, it is probably no accident. Matraimov is a behind-the-scenes kind of operator. And his powerbrokering abilities have stood him in good stead. The label long ago dreamt up by his detractors – Rayim Million – is a part-embittered, part-envious reference to the riches that the extended Matraimov family has managed to accrue over the years.

Back in Matraimov’s native Agartuu, a village redolent of pungent hay and where clucking chickens skitter along country roads, older residents readily recall how their most famous son showed a talent for nurturing influence even from a young age.

“He used to have a bicycle,” said Salimbek Ormonov, a childhood acquaintance. “He would happily give it to the other guys in the village just so they could have a ride … Everyone was drawn to him, feeling his care and kindness.”

Matraimov’s critics contend that what he did on the national stage was merely a turbo-charged version of the same thing.

The figures in Kyrgyzstan who shovel money at high-ranking officials and politicians in exchange for high-level patronage are known popularly as “wallets.”

Few are said to have deployed this method more eagerly than Matraimov, whose family seems to hold tremendous sway over the state without actually holding any top posts themselves.

And some fret that this state of affairs is a threat to the nation’s very existence.

Shirin Aitmatova, a former lawmaker, told Eurasianet that the country is currently witnessing “a mutated version of oligarchic political presence.”

Unlike wallets before them, “the Matraimovs are no longer hiding,” said Aitmatova, referencing a brazen direct-to-camera appeal created by Matraimov in May in which he boasted that he had more than enough "strength and resources" to take on a prominent political foe.

The Matraimov family is not exactly shy about its riches. His son has in the past posted pictures on Instagram documenting his lavish lifestyle, while multiple palatial properties are registered to close relatives.

Unable to ignore the public clamor, President Sooronbai Jeenbekov, a fellow southerner who is one of many to have faced accusations of being under Matraimov’s sway, last year ordered an investigation into how this had come to pass.

And yet, even several months after the state’s top anti-corruption agency had begun its inquiry, one of Matraimov’s six brothers, Islambek, continued to act as chief of the same body’s internal investigations department. Islambek Matraimov resigned in May, finally yielding to complaints about the transparent conflict of interest.

Gulamzhan Anarbayev, the head of a separate anti-graft body, the State Financial Intelligence Service, admitted last month that his sister was married to yet another Matraimov brother. Anarbayev, who is also from Kara-Suu district, had previously denied the claim.

Matraimov has no more dogged an enemy than ex-President Almazbek Atambayev, who ended his single permitted term in office in November 2017. (It was Atambayev that Matraimov was lambasting in his May video address).

Atambayev has accused the former customs boss and Jeenbekov, his protégé-turned-antagonist, of orchestrating the creation of a “family-clan regime” similar to those in power before the revolutions of 2005 and 2010. The former head of state has thundered that he will do all it takes to stop them.

As it happens, however, Atambayev is just a whisker away from landing behind bars in the wake of parliament’s rushed decision last month to strip him of immunity from criminal prosecution.

The irony of this confrontation is that Matraimov is as much as anything a product of Atambayev’s six years in power.

He earned two promotions under Atambayev, becoming "half man, half myth" long before the former head of state left office, according to political analyst Emil Dzhuraev.

"Atambayev would have been fully aware what was going on in the Customs Service during this period," Dzhuraev told Eurasianet.

That Matraimov even survived the 2010 overthrow of President Kurmanbek Bakiyev, a period of intensive hiring and firing, is also significant.

That same year, a tapped phone conversation between Atambayev and another senior figure in the post-overthrow government, Azimbek Beknazarov, surfaced on the internet. In this exchange, Beknazarov is heard accusing Atambayev of accepting a bribe of $400,000 to allow an unnamed customs official in the south to retain his post.

“I think it is a shame to be arguing about some customs officials,” Atambayev tells Beknazarov, dismissing his concerns.

There are few doubts as to which customs official the pair were alluding.

It was only during his last day in office, at the end of November 2017, that Atambayev, perhaps sensing imminent vulnerability, leaned on his acolyte, the young Prime Minister Sapar Isakov, to fire Matraimov.

Matraimov subsequently took his unfair dismissal complaint all the way to the Supreme Court and won. Isakov, by contrast, has since last June been in jail facing corruption charges.

Back in the Matraimov heartland of Kara-Suu, the country’s most densely populated district, the family charitable foundation is king.

Named in tribute to Matraimov’s farmer father, the Ismail-Ata Foundation is paying for dozens of students from low-income families to study at universities in nearby Osh. The charity also funds food drives for the elderly, builds sports facilities for youth, and is poised to finish work on building the district’s biggest mosque.

A sporting tournament staged in May by the foundation in the town of Kara-Suu was attended by the deputy prime minister, the speaker of parliament and a host of lawmakers. They were invited by Matraimov’s parliamentarian brother, Iskender, and hosted by another sibling, Tilek, who serves as head of the district administration. Overseeing it all was Rayimbek Matraimov, who was spotted taking photos of volleyball and football games on his phone.

Matraimov has had a more torrid time of things in the media.

A sprawling, if loosely sourced, report by RFE/RL’s Kyrgyzstan service, Radio Azattyk, raised questions over his potential connection to operations to spirit hundreds of millions of dollars out of Kyrgyzstan in a series of nebulous transactions. Another outlet has sounded the alarm that people close to Matraimov may have purchased Super-Info, a hugely popular Kyrgyz-language tabloid newspaper.

In what appears like an attempted fightback, dozens of fake-looking social media accounts have waded into the online conversation, posting disparaging allegations against Radio Azattyk.

But when Kyrgyz politicians are truly embattled, they go home.

Atambayev, for instance, who is fighting to preserve his freedom in the face of what looks like a politically motivated corruption probe, is leading his resistance from his plush residence outside Bishkek. Hundreds of tough-looking locals have rallied to his side and pledged to block any attempt to detain him.

Zhyldyzbek Tillabayev, the administrative head of a district that encompasses Agartuu and several other villages, said the Matraimov family would have no problem doing the same if pressed.

"Just ask any boy on the street who Rayimbek is, and they will tell you they want to be just like him," Tillabayev told Eurasianet. "Whenever Matraimov is here, people gather around him and he listens to their problems.”