Sarkarbayev met with notorious gangster Jengo in a jail in 2015. 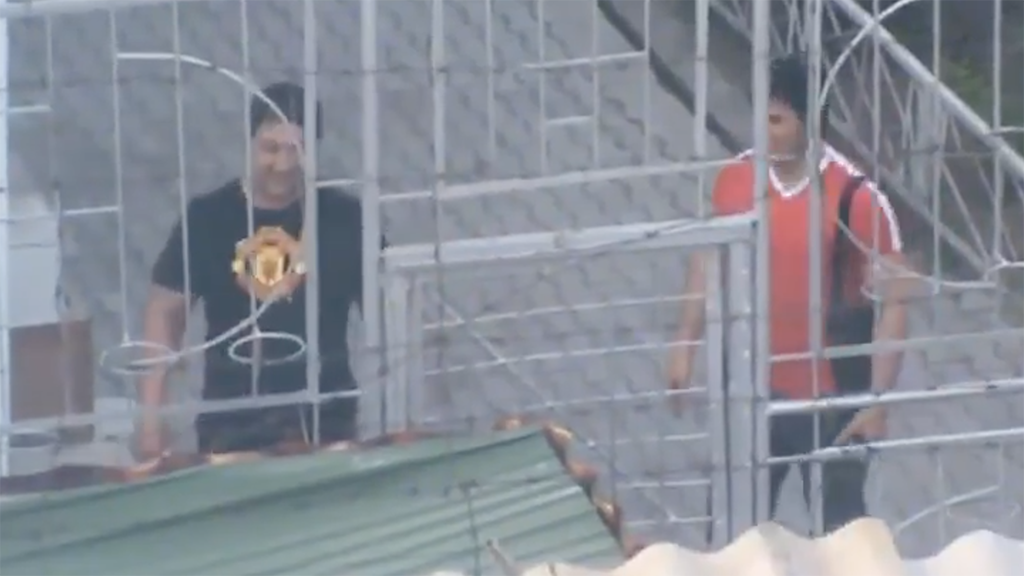 Dosonov, left, seen leading Sarkarbayev to the gates of a jail in Osh in 2015. (Photo: Facebook video screengrab)

The intrigue over alleged ties between a man described as Kyrgyzstan’s behind-the-scenes kingmaker and the violent underworld show no signs of abating.

Authorities confirmed on September 25 that Kylych Sarkarbayev, a senior official at city hall in Osh, met in 2015 with a suspected gangster called Kadyrbek Dosonov, but more popularly known as Jengo. The encounter took place in a pretrial detention facility.

Sarkarbayev is in an awkward spot as it is. Police had confirmed indirectly that he is suspected of involvement in a violent dispute on September 22 that culminated with him shooting a former police officer in the leg. The victim in that incident, however, is now claiming he accidentally shot himself.

What drew particular attention to that episode is that Sarkarbayev is known to be a close associate of Rayimbek Matraimov, a politically influential former high-ranking customs officer. Journalists with RFE/RL’s Kyrgyz service, Radio Azattyk, have led the charge in investigating the considerable riches accrued by Matraimov and his immediate relatives. The Matraimov family has made ample use of their wealth to boost their standing in Kyrgyzstan’s south, where their power mainly resides, through philanthropic activities.

The encounter between Sarkarbayev and Dosonov was initially revealed by Ydyrys Isakov, a reporter for RFE/RL’s Kyrgyz service, Radio Azattyk. The face-to-face parley appears to have taken place within a pretrial detention facility in Osh. In one striking detail of the video footage of this meeting, it is Dosonov that leads Sarkarbayev to the exit of the facility before him waving him off, suggesting that he was given considerable freedom to roam the grounds.

Penitentiary officials have confirmed that the footage is genuine.

Writing on Facebook, Isakov, the Azattyk reporter, expressed dismay that this encounter has not been investigated by the police or the Osh city hall, where Sarkarbayev is head of the sports committee.

“Let us agree what side of the river we are standing on. Or are we going to make fools of one another? It is clear what side Kadyr Dosonov is on, but what about the others?” Isakov wrote. “Before the mayor of Osh comes out and says that he is ridding the city of bandits, he should look at how he has staff working under him that support organized criminal groups.”

The Sarkarbayev saga took yet another turn on September 26, when the man he purportedly gunned down, a former police officer and mixed martial arts fighter, gave an interview to local television to claim he had actually shot himself. The man, Tologon Rakhmanberdi uulu, said the trouble began when a mutual acquaintance turned up for a meeting with a gun he claimed to have found.

“I asked him to let me take a look at the weapon since I am an [ex-police officer]. It turned out that the gun was loaded, and I accidentally shot myself. And then they took me to the hospital,” Rakhmanberdi uulu told Osh Pirom television station.

It is unclear whether this means that the police, which initially described what happened as an assault, will now drop its investigation into the matter.

A representative for Osh city hall, Azamat Absattarov, told Eurasianet that his office had no idea of Sarkarbayev’s exact whereabouts as he is not answering his phone, but that they are in no rush to adopt punitive action.

“He does good things for the city and promotes the development of sports, so it is important for us to hear his opinion about what happened. Until we talk to him ourselves, it is difficult to draw any conclusions about whether or not he is guilty,” Absattarov said.

As for Dosonov, he was released from prison in July 2017 following rulings by the Osh regional and Kara-Suu district courts to overturn a murder conviction. Those rulings were upheld by the Supreme Court. Dosonov had been found guilty on charges of murdering a policeman, Tolkunbek Shonoyev, in January 2013. But at the appeal hearing, Dosonov’s lawyer managed to successfully persuade the courts that there were insufficient grounds for keeping his client in prison.

The Interior Ministry maintains that although Dosonov was absolved, he is being kept under close scrutiny.