Kyrgyzstan: Kolbayev arrested in dramatic fashion, but is it theater? 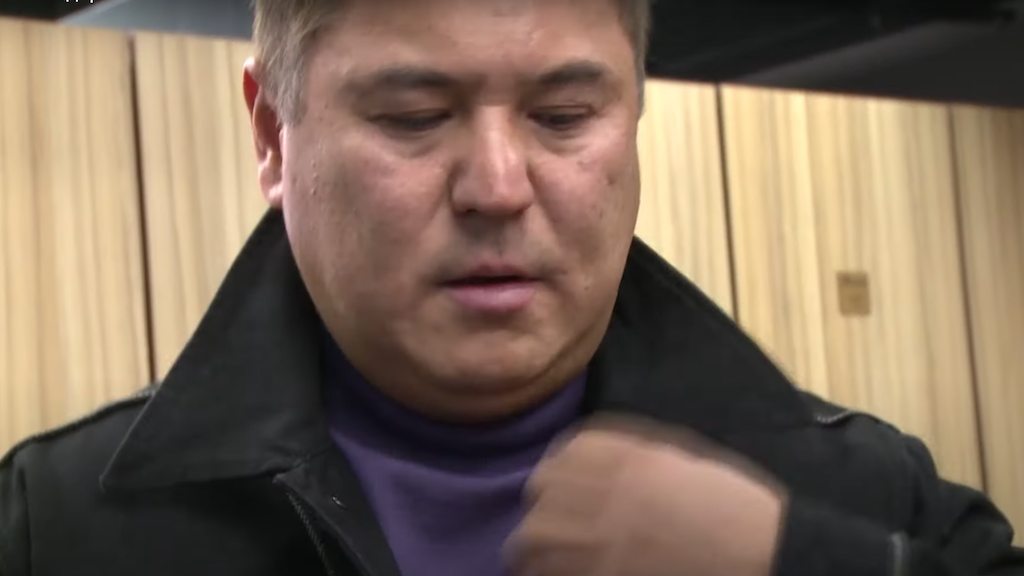 Video footage released by the State Committee for National Security, or GKNB, on October 22 showed an APC and a minibus full of heavily armed special forces troops rushing into the premises of a private sports club in Bishkek to detain Kolbayev.

It is not yet clear what charges, if any, Kolbayev, whom the GKNB also identifies with the name Kamchybek Asanbek, is likely to face. The agency’s statement notes only that he is being taken into custody to “obtain information on [his] criminal activities … and that of associated people in criminal circles.”

Kolbayev has also been targeted by the authorities in the United States. Since 2012, he has been under U.S. Treasury Department sanctions.

That notwithstanding, he was released from a Kyrgyz prison in June 2014 after serving around 18 months behind bars on extortion charges. According to reporting done by Kloop news website in May 2014, when the conviction was handed down, prosecutors had unsuccessfully sought a 14-year prison sentence on many other offenses, including kidnapping, inflicting bodily harm, illegal possession or sale of weapons, and possession of illegal narcotics.

The U.S. Embassy in Bishkek issued a snap press release on the occasion of Kolbayev’s arrest to express “hope that the Kyrgyz government will prosecute and continue to detain this dangerous criminal leader in the interest of public safety.”

Anxiety on this count will have been sparked by the brief detention on October 20 of Rayimbek Matraimov, a wealthy and powerful former deputy head of the customs service who is alleged to have made hundreds of millions of dollars from smuggling.

Matraimov is widely believed to have deployed his riches to influence the ruling elite and thereby evade investigations into his dealings. His detention had for a brief moment raised the suspicion that the government led by Sapar Japarov might be serious in its rhetoric about fighting corruption. Insistent rumors of Japarov’s links to organized crime and his feeble-to-inexistent record on combatting corruption during his brief stints in public office have given rise to doubts on that front.

Any hopes were largely dashed, however, when Matraimov was released from custody within hours after committing to a written undertaking not to leave his place of residence.

The GKNB said on the same day that Matraimov had expressed readiness to pay the state an amount of 2 billion som ($24.5 million) in compensation for damage caused by his activities to the country’s coffers. A first payment of 80 million som has already reportedly been deposited into a GKNB bank account.

The way in which the deeply publicity-shy Matraimov had apparently submitted to be arrested has raised suspicions over whether his brief time in security services custody was in fact mere theater.

The dramatics around the arrest of Kolbayev will arouse similar skepticism. GKNB footage of the detention showed troops swooping in on the convicted mobster, all to the accompaniment of a sweeping action film-style score. Kolbayev, meanwhile, looks utterly unfazed. At one moment, the arresting officers pause before slapping on the handcuffs as Kolbayev serenely arranges his collar.

Kolbayev’s notoriety is such that the authorities may struggle to allow for as immediate a release as enjoyed by Matraimov, who has no criminal record. It is this eventuality that the U.S. Embassy seems to be attempting to caution against with its appeal for the authorities to “continue to detain” Kolbayev.

Kyrgyz law enforcement has customarily shown extreme reluctance to go hard on Kolbayev, however. The blind-eye treatment is also put down by scholars of the organized crime scene to the influence wielded by the underworld over Kyrgyzstan’s politicians and officials. It has latterly been alleged, albeit without explicit evidence to that effect, that Kolbayev and similar elements may have assisted in stoking the unrest that brought Japarov to power earlier this month.

There was a wave of scandal in August last year when it was rumored that Kolbayev was celebrating his 45th birthday in style in the Issyk-Kul town of Cholpon-Ata. According to unconfirmed whispers, the celebration was attended by high-ranking government officials, members of parliament and business associates, including some from abroad.

Police at the time declined to comment on the purported birthday bash. A police representative had told reporters previously only that it was their understanding that Kolbayev had branched out into farming.