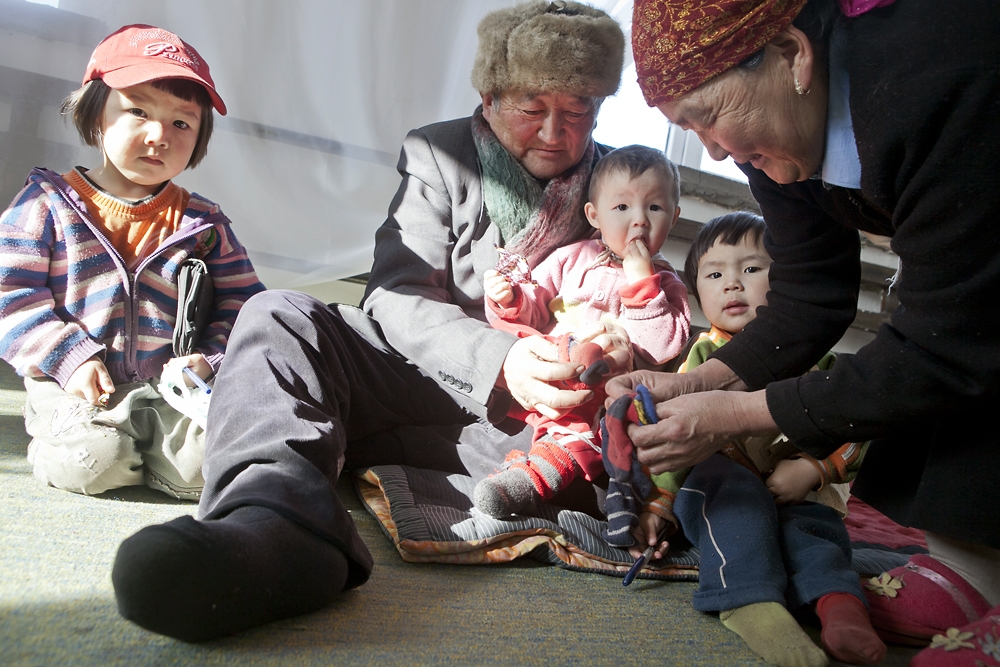 Children left behind by parents who find work abroad are a growing concern in Kyrgyzstan. (Photo: David Trilling)

Like most residents of her children’s home in Osh, Nargiza is a part-time orphan. Her father disappeared when she was born and her mother works long spells in Russia. Nargiza has no siblings and doesn’t know her grandparents. But she does see her mother from time to time.

“I live with my mother when she is in town,” says the wide-eyed 10-year-old. “No one comes to visit me when my mother is in Russia. She says nobody gives us money and that is why she must go to Russia to work hard.”

For many, the words “orphan” and “Kyrgyzstan,” when said in one breath, conjure up stories of international adoption scandals, corrupt middlemen, and a moratorium on adoptions by foreign parents. But for sociologists and psychologists, the larger tragedy is that thousands of children with living parents are ending up in Kyrgyzstan’s orphanages in the first place.

They are the so-called social orphans – the offspring of those who leave the country for long periods in search of work. With Kyrgyzstan’s growing poverty, and widespread labor migration, the number of these children is on the rise, experts say.

According to her teachers, who agreed to speak only if the girl’s name was changed, Nargiza regularly attends school, but the instability upsets her development.

“Nargiza’s mother takes her home only occasionally. Being a single mother, most of the time she is in Russia looking for work,” said Nargiza’s teacher Zoya, who declined to give her surname in order to protect Nargiza’s privacy. “The little girl still does not have a birth certificate, and her difficult situation negatively affects her school progress. She is quite reserved and does not socialize much with other children.”

Government dysfunction has left many children to fall through the cracks, says Edil Baisalov, the recently appointed deputy minister of social development.

“Government social support to needy children is not organized,” Baisalov told EurasiaNet.org. “The government does not deliver proper assistance to children in difficult situations. How can it possibly be that 10- to 12-year-old children in the 21st century do not have birth certificates?”

According to research conducted by My Family, a UNICEF-funded NGO in Bishkek, today over 11,000 children live in Kyrgyzstan’s 117 children’s homes, sometimes referred to as orphanages. Most are admitted for one of three reasons: the death of a parent (22 percent); a family’s difficult financial situation (21 percent); or divorce (14 percent). Only 6 percent have no living parents.

Though Kyrgyz families, according to Baisalov, adopted over 1,000 kids in 2010 and as many in 2011, My Family says the number of institutionalized children is increasing with Kyrgyzstan’s worsening poverty. The Kyrgyz National Statistics Committee reports that 36.8 percent of the population lived below the poverty line in 2011, an increase of 3.1 percent over the previous year.

Poverty is what’s driving the labor migration. By many estimates, 800,000 Kyrgyz -- or about 15 percent of the country’s population -- are working abroad in Russia and Kazakhstan, mostly doing menial labor like shoveling snow in Moscow or cleaning up in fast-food restaurants. According to the World Bank, in 2011, the last year for which statistics are available, remittances totaled the equivalent of 29 percent of GDP, making Kyrgyzstan the third-most remittance-dependent country in the world.

“With the growing poverty in Kyrgyzstan, the number of social orphans is growing as well,” said Nazgul Turdubekova, the director of Bishkek-based League for the Rights of the Child, an NGO.

Turdubekova says the government’s 2011 Social Protection Strategy, which aims to provide financial help to children in low-income families, “does not work.”

“There is no effective government program to deliver social assistance to low-income families,” she told EurasiaNet.org.

Moreover, statistics overlook the vast number of children living with their extended families, says Gulnara Ibraeva, a sociologist at the American University of Central Asia. “Considering the volume of migration, the real number of children living at relatives’ is much higher” than any statistics show, Ibraeva said, warning that the family as an institution is “disintegrating.”

“The life of the child has fallen in value. Children become a crushing burden for parents. The government does not care for children in need. It is a systematic failure. It is a systematic problem. We have several lost generations,” said Ibraeva.
Turdubekova blasts the government for sending the lion’s share of cash benefits to institutions, rather than to families in need, in effect making the institutions “compete” with families.

“The government uses most of its resources dedicated for needy children to finance children’s homes, allocating 6,000 to 11,000 soms ($126-$231) per child per month; parents from low-income families receive only 500 soms ($10) per month per child,” Turdubekova said. “The difference between 6,000 to 11,000 and 500 soms is huge. Naturally, it turns out that needy families cannot compete with the government, and they are forced to take their children to orphanages.”

Moreover, through waste or graft, the money sent to institutions is not wisely spent, Turdubekova said: “The child actually receives only 30 to 40 percent of the aid. The rest is spent to maintain buildings, for utilities and staff salaries.”

Even if the funding were reorganized, it would probably do little to stem labor migration, and not help children like Nargiza. But it could make it financially viable for more parents to leave their children with relatives, which psychologists argue is usually preferable to state-run institutions.

Ibraeva, the sociologist, believes authorities must rethink their spending priorities. The government gives each family 1100 soms as a social benefit at the birth of each child. But the amount paid as a “funeral benefit” at the death of a family member is much higher: Between 1850 soms and 7100 soms, for unemployed and employed, respectively.

“What is of greater value – birth or death? Of course, both are sacred, but as more money is spent on death, it appears death is more valuable in Kyrgyzstan,” Ibraeva said.

Hamid Tursunov is a freelance writer from Osh.