Ahead of elections this weekend, one candidate’s signature campaign gimmick was to hold a contest for his daughter’s hand. 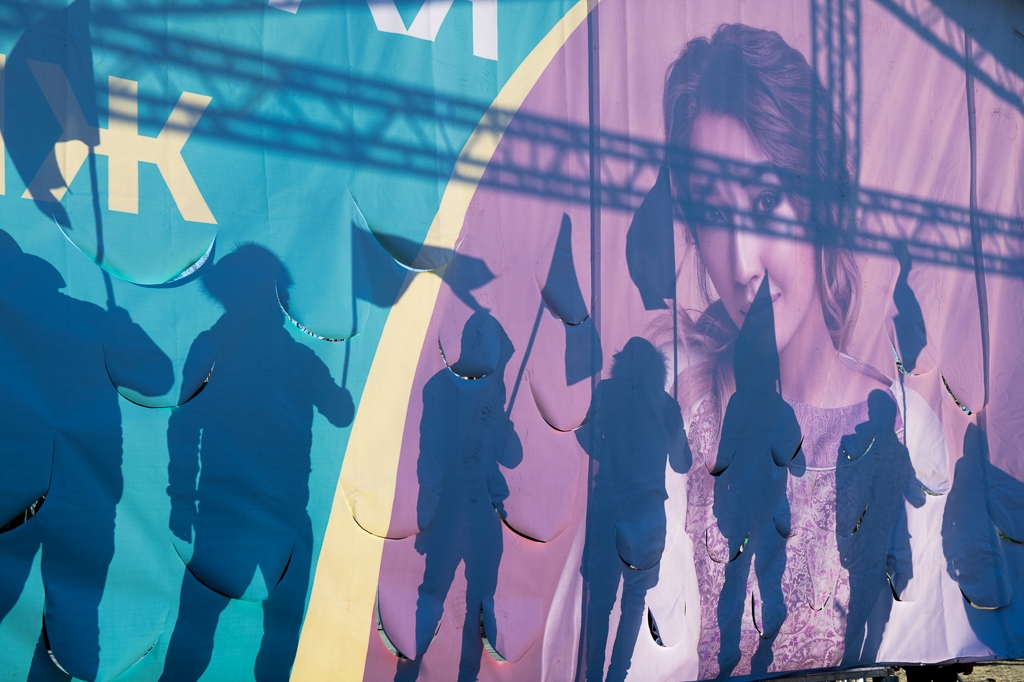 There were, after all, 12 rivals vying for the same single-mandate seat in Naryn, an unglamorous town perched high in the mountains of southeastern Kyrgyzstan, ahead of the November 28 vote.

His idea of a publicity stunt was to hold a contest. The prize: the hand in marriage of a woman he alluded to as his daughter. It was meant to evoke images of an ancient ritual, with aspirant suitors battling to prove their worthiness to join a model dynasty of Kyrgyz success.

Abdykerimov is rich – something he often enjoys reminding anybody who will listen. Very rich. He started out in the early 1990s by setting up the vodka-producing company Ayu, a household name in Kyrgyzstan, and then expanded into construction, tourism and agriculture. His campaigning literature liberally boasted of how he owns an apartment in one of the tallest buildings in London.

He’s a successful politician too. He founded the Kyrgyzstan Party in 2010 (or maybe 2013 – pinning down these kinds of details in Kyrgyz politics is never easy to do). He rode that creation into parliament in 2015. Before that, he had belonged to the Respublika party, for which he also served as an MP, although he relinquished his seat only months after winning it.

The Kyrgyzstan Party was for its detractors little more than a spoiler party: a congregation of government-friendly cronies whose existence served only to snaffle away votes from gadfly opponents of the people then ruling the country. Things have moved on. There is a new president in town – the populist nationalist Sadyr Japarov – and the party-political landscape has changed entirely. Kyrgyzstan Party is now only about Abdykerimov. Its slogan is telling: “One party, one candidate.”

The signature campaigning gimmick was to be the contest for his daughter’s hand. 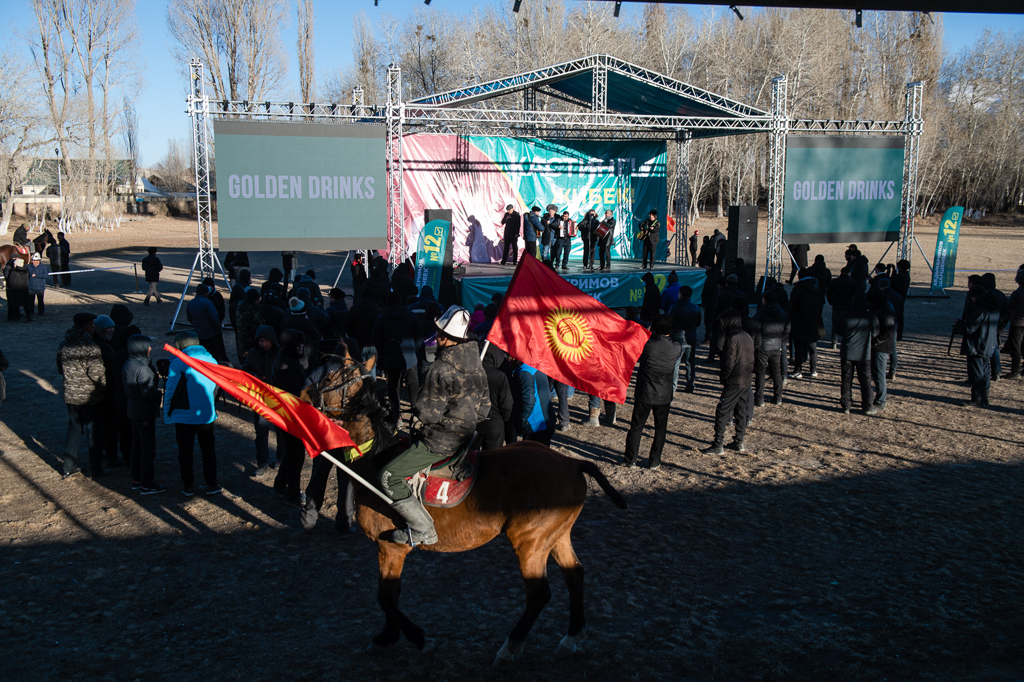 “As has become known, there is a large number of people, including some from neighboring countries, wishing to marry into the family of one of Kyrgyzstan’s richest men,” announced a statement distributed to local media by a public relations agency.

The statement was accompanied by photos of a beautiful young woman adopting alluring poses in exotic locations around the world. At least 300 men applied for the honor of marrying her, Abdykerimov’s team later told journalists.

Selection of a winner was to take place across several public casting sessions doubling up as campaign events.

The first was held on November 12 in a crumbling stadium in the village of At-Bashi. Proceedings were scheduled to begin at noon. Half an hour before, two screens set up on either side of the stage began playing clips extolling Abdykerimov’s virtues, as well as the merits of Ayu-manufactured spirits. In the center, hung a heavy-duty vinyl billboard bearing the name and picture of the purported daughter, Zhibek. 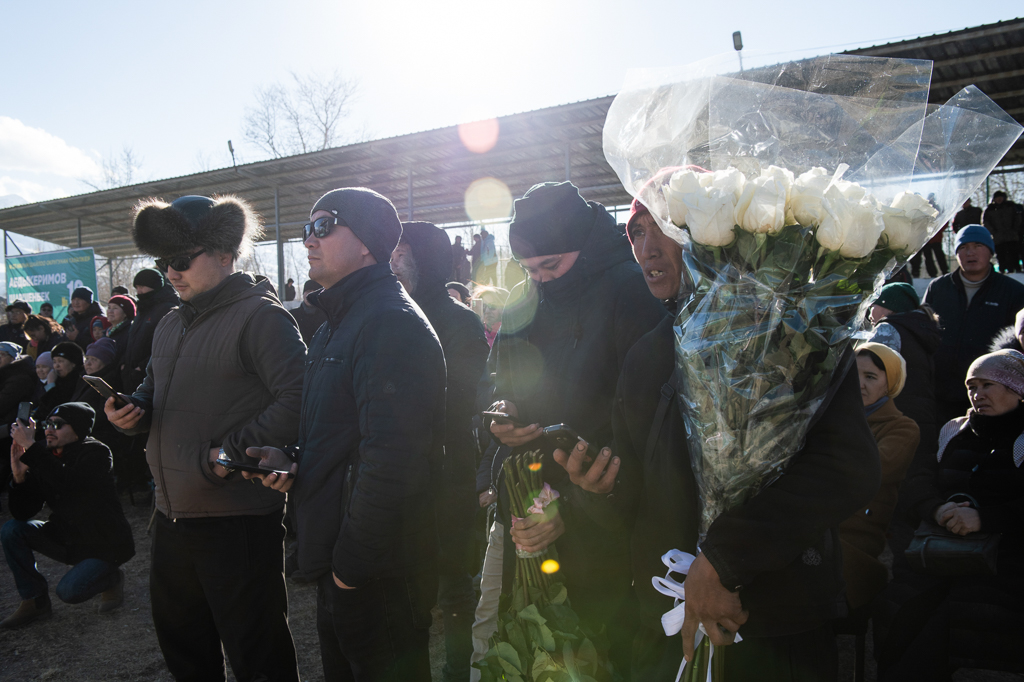 Midday came and went without anything happening, however. By 12:30 p.m., around 30 people – old men, middle-aged women and a few young people – sat around chatting among themselves. This meager turnout doubled in the succeeding half-hour as friends of the suitors arrived. They stood guard by the bunches of roses that were to be handed to Zhibek.

This nervous anticipation dragged on for several hours. One of the suitors had lunch, some spectators wandered off home. The most stubborn stuck around in the cold for the promised entertainment.

The show finally got underway at 3 p.m. with the presenter summoning contestants to the stage. Far from the 300 suitors that Abdykerimov’s people had boasted about, only seven men turned up. All but one were from the capital, Bishkek, a five-hour drive away. The last was a local man.

Daniyar, a 29-year-old from Bishkek, told Eurasianet that he felt no awkwardness in competing for the hand of a rich man’s daughter. To find a wife is the duty of every man, he said.

“I am relaxed and confident in myself,” he said. “I know what I’ve come here for. We live in the 21st century. You cannot assume and expect that things will be like it was before. Now, everything is possible. She’s the daughter of a billionaire. Maybe I’ll be a billionaire too someday.” 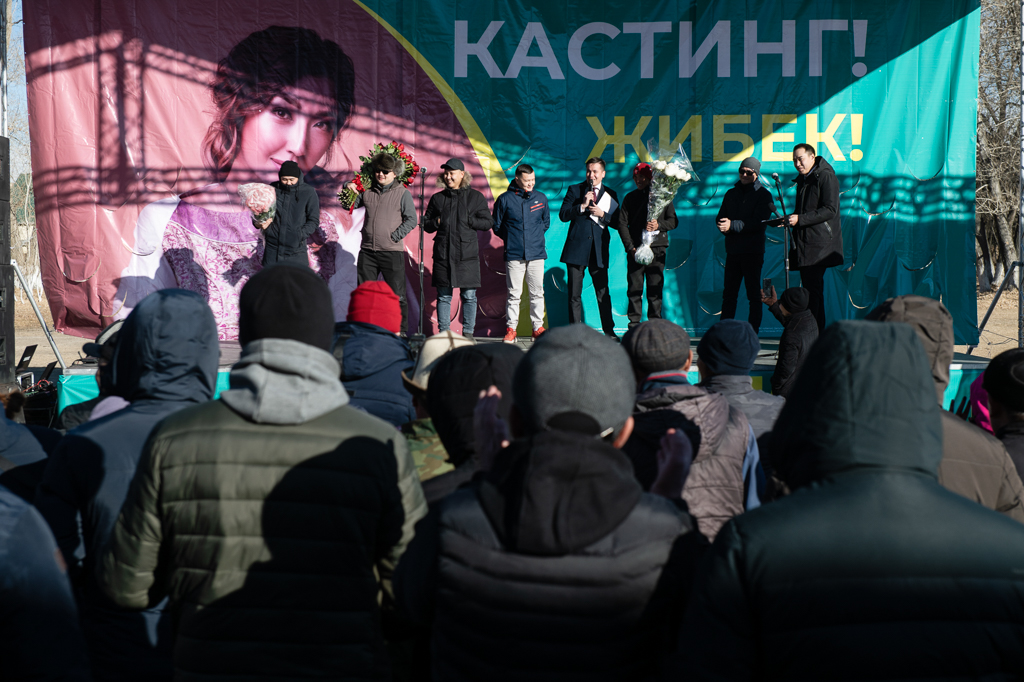 Zhibek, though, turned out not to be Abdykerimov’s daughter at all. The word “daughter” is often loosely used in everyday conversation, and that seems to have been the case here. She is, in fact, the daughter of Abdykerimov’s wife’s sister.

Zhibek arrived at the stadium at midday in a white Lexus and dutifully hung around. She has had a role in the process of picking her own would-be groom-to-be, although not a very significant one. Competitors are required to show their respective merits in over a dozen personal qualities, including responsibility, love for children and having a sense of humor. The figure of a round dozen was not accidental. The Kyrgyzstan Party was officially registered as the twelfth party among those running for seats.

When the competitive section of the event began, all attention turned to Abdykerimov, however. One test required contestants to open a multiple-choice quiz website on their smartphones and answer a series of questions about the tycoon-candidate: “What kind of food does Abdykerimov like? When was he born? How many people work for him? Will you vote for him?” 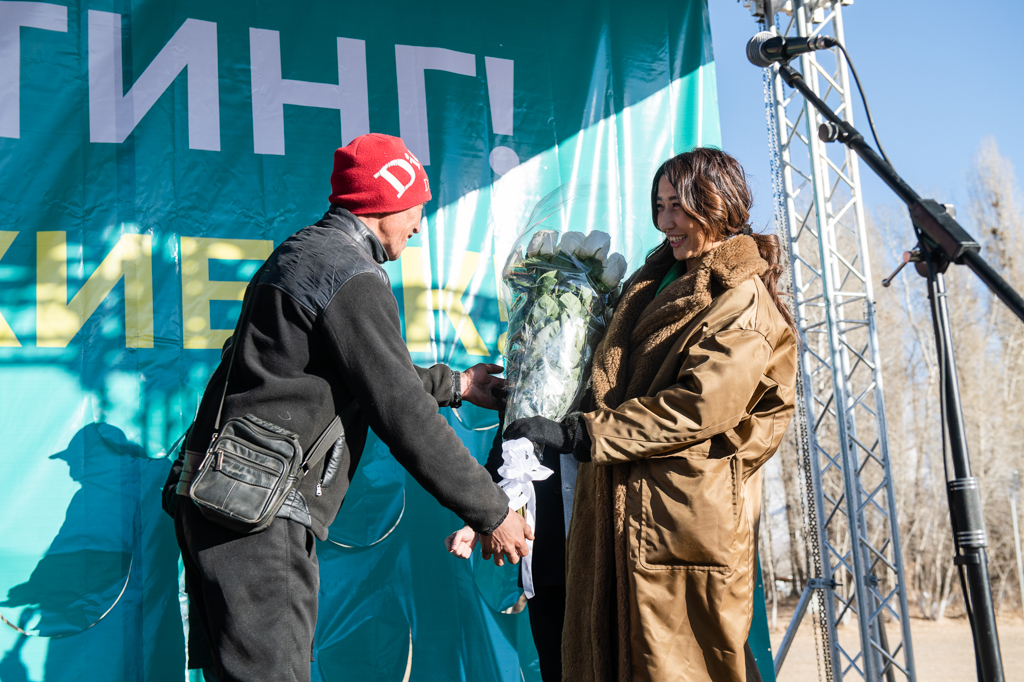 The three eventual winners of the semifinal faceoff, which lasted only half an hour, were told they were to proceed to a final to be held at a future date. Given how few people were present at At-Bashi, though, there is some doubt whether that final will ever happen.

With that business completed, the show moved onto its next phase. Three flag-waving men on horseback paraded into the stadium, followed by three cars and a motorcycle. Finally, Abdykerimov swept in, wrapped in a sheepskin coat and wearing a fur hat. He mounted the stage with a retinue of formidable-looking bodyguards and an ensemble of musicians.

“This musician is Kazimir, [former Kazakh President Nursultan] Nazarbayev flies him over to his place in a helicopter. This is another friend, Muslim, he’s a professional drummer from Yalta. This friend, Vitalik, he says he’s Russian, but actually he’s a Kyrgyzstani. And this guy, Vladimir, he’s a Zaporozhian Cossack,” Abdykerimov told the crowd, presenting the band. 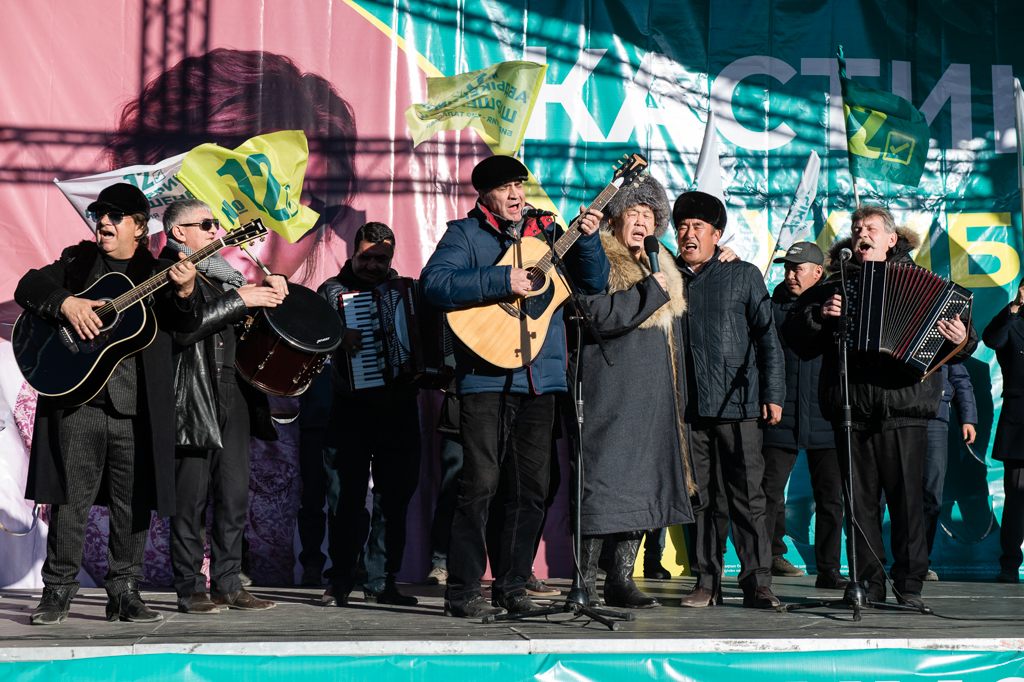 After the group performed a song, Abdykerimov came to the stage once more to inform the small crowd that this was how he spent his free time.

The group then continued their performance. Much of their repertoire consisted of songs celebrating victory in the Second World War, love and wealth. Abdykerimov at times joined in with the singing.

The modestly and lightly dressed audience watched largely in a bemused and embarrassed silence punctuated only by the erratic performances onstage. Abdykerimov went backstage after an hour of all this. He appeared to have indulged in multiple drinks before the show. His relatives pleaded with him to leave, but he rebuffed their arguments. The bodyguards ordered people standing around, who included some local election observers, not to film what was being said. “This is a municipal stadium. I live here. I’m allowed to be here,” said one woman as she was led away by the heavies. 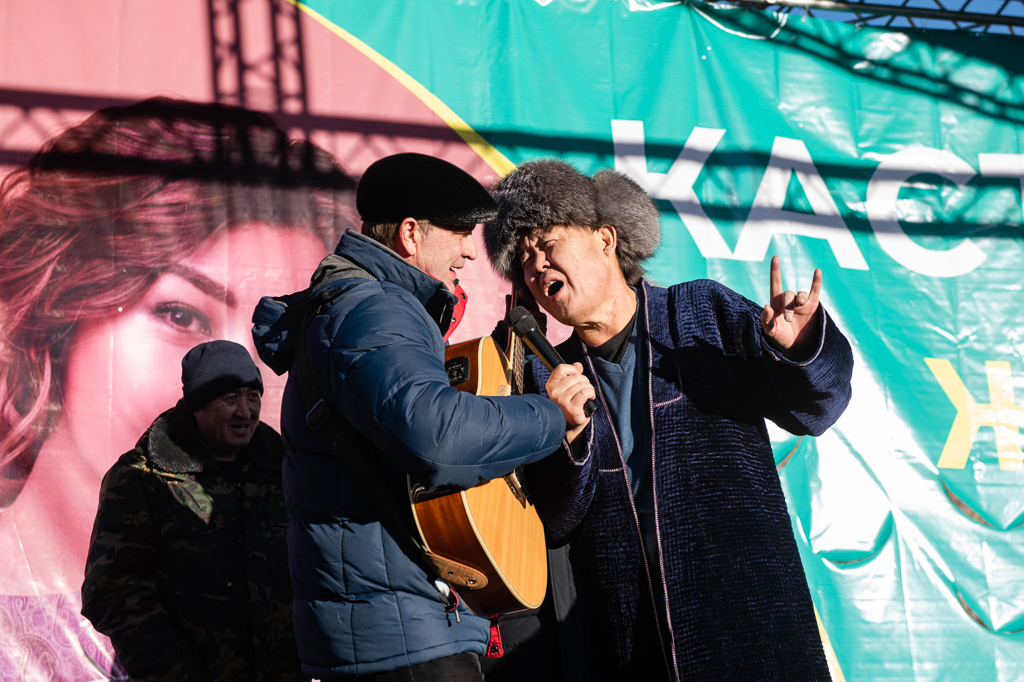 As darkness descended, the crowd thinned further. But still the show continued. Abdykerimov belted out about 10 more songs, interspersing these with repeated reminders to the audience that he was indeed a billionaire, and performed two further wardrobe changes. First, he donned a blue, velvet Uzbek chapan cape. Later, he slipped on a short, black quilted jacket.

His bodyguards, and then also local residents, begged people not to film any footage: “Please don’t film, have some sympathy. He’s a good and honest man. If you put these videos up anywhere, At-Bashi will be disgraced.”

Well after sundown, Abdykerimov stopped singing and asked a weary, disappointed crowd if they wanted to ask any questions. Only one man came forward, to ask if the tycoon was prepared to pay for a gym hall to be built in the village. Abdykerimov snapped at the man, ordering him to take his hands out of his pockets. The man, who was struggling desperately against the cold, refused, only incensing Abdykerimov further: “Take your hands out of your pockets I said! You are showing me disrespect!”

The sparse crowd leapt to the young man’s defense, agreeing with him that it had become unbearably cold, but the man finally gave in. Abdykerimov offered his long-awaited answer: “Okay, I will build a gym hall here and I’ll invite you to come and cut the ribbon. And then you can publicly apologize to me.”

Abdykerimov resumed his singing, after which he made a surprise announcement: “I am withdrawing my candidacy. Everybody should stick to what they know. The shoemaker patches up boots, the baker makes pies.” Instead of running for parliament, he said, he will keep expanding his business empire and build 20 more factories.

Abdykerimov then admitted he too had grown cold, borrowed a coat from one of his guards, and sang one more song. After that, he got into his car and was driven away.